Cook this quick and easy nutritious porridge for our dinner. I have turned this simple dish into two version that suits both kid and adult. I cooked the porridge with some wolfberries until almost done then I add in the half-cooked pan-fry cod fish and continue to simmer till done.

Wolfberries can strengthens our body and bones, supplements kidneys and energy, nurses liver and clarifies eyes. It also cultivates energy and aids yang bodies, moistness lungs and stops coughing. Whereas Cod is a popular fish with a mild flavor, low fat content and a dense white flesh that flakes easily. The use of cod fillet is to prevent bone that might be found inside the fillet and cause hazard to kid when they consume. 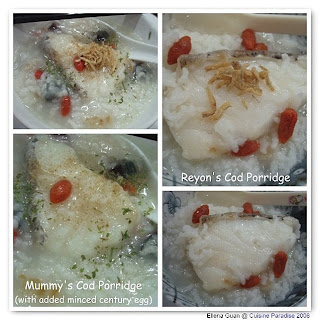 If your kid is not fancy of eating fish, this is a good dish which i find it suitable to incorporate fish into their meal, as the porridge is ready to be serve, you can just check for bone in the fillet then mash it together with the porridge and feed the kid, the texture and colour of the cod fillet blend well with the porridge and the kid don't really notice the existing of the fish...... :)

Note:
a) If you prefer to add more fish, you can choose a bigger portion.
b) The use of the century egg is optional if you don't prefer.

You can also check on my other recipes using which use Cod Fillet @ COD RECIPES. 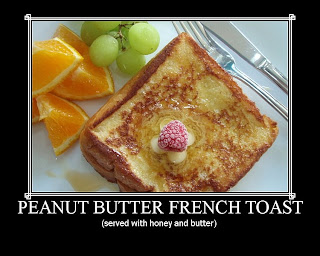 Since today our Sunday service had being change to a later timing, I decided to make a hearty Breakfast for the day. After eating Peanut Butter French Toast from one of the Hong Kong cafe, I decided to try out this dish using my own method. But I didn't really managed to get that puffy and crunch bread like what I had eaten in that cafe :( 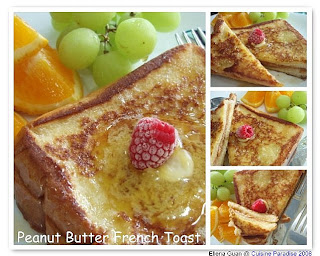 So from what you seen here, it's just normal sandwich bread that I spread with Peanut Butter and pan-fry with beaten egg then serve with extra honey and butter. In order to cut that that grease effect, I serve it with some orange wedges and grapes to make it more healthy.

P/s:
If anyone of you know any good and proof method for making this nice Hong Kong Style French Toast, do drop me an email/comment to advise me can? Thanks. 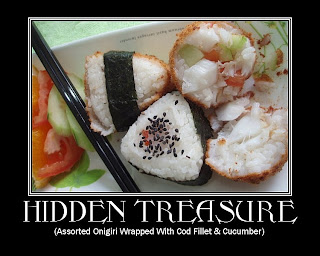 This is the adult version of the Cod Onigiri which I made for Reyon. His onigiri is slightly different from mine because I didn't wrapped it with any filling, I just mixed the cooked sushi rice with mashed cod fillet then coat it with fish floss. 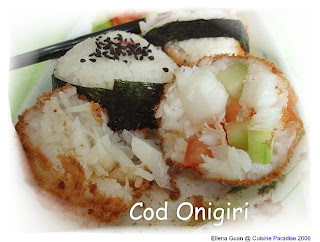 As you can see from the picture, my version of the Cod Onigiri is more colourful with different assorted design. I wrapped it with some cod fillet, cucumber and tomato cubes for that extra crunch.

Assemble the Cod Onigiri
1. Cook the sushi rice according to same method as Cod Fish Rice in my previous post.
2. When it is done, slowly removed the fish from the top of the rice and set aside.
3. Use the rectangle Onigiri mould, spread a layer of cooked rice, add a piece of the cod fillet, some tomato and cucumber cubes then top with rice, shape it into triangle shape.
4. You can assemble it with seedweed strips, sesame seeds or even coat with fish floss.

Notes:
a) You can season the cooked rice with some sushi seasoning to enhance the flavour of the rice.
Posted By: Cuisine Paradise 2 comments: