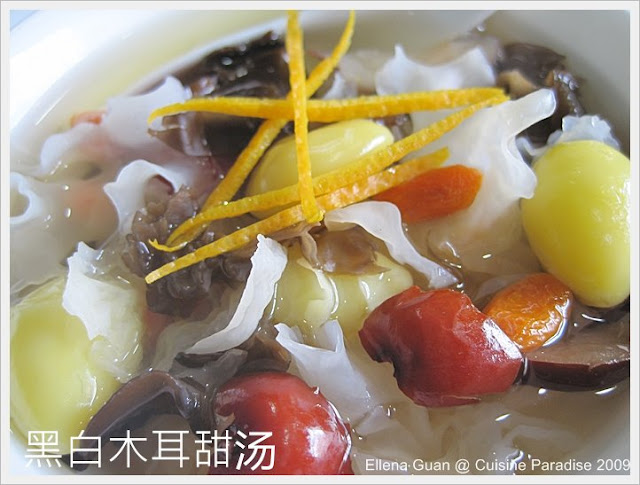 I have being coughing badly for the past one week which I think might be due to the bad weather or the amount of Durian that I consume during the previous week. So since my lady boss gave me a few packets of freeze dried black fungus. I decided to make this Dual Fungus Sweet Soup for this weekend. 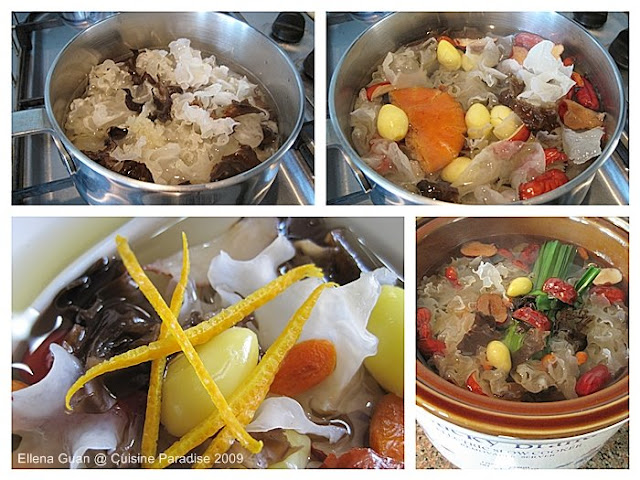 As you can see from the photos, other than the dual fungus, I also added in some Ginkgo nuts, red dates, wolfberries and candidate tangerine which makes it a good and smoothing dessert for cough or cool down the body system from hot weather.

White Fungus(雪耳): tastes slightly sweet and of neutral nature. It benefits the spleen, strengthens the stomach and expel Dryness. It calms the spirit, treats insomnia and is good for the body type that resists beneficial food.

Black Fungus(黑木耳): has a reputation in Chinese herbal medicine for increasing the fluidity of the blood and improving circulation.

Ginkgo nuts(白果): are usually sold dried, or shelled and canned in brine. It is traditional Chinese food that nourishes lung energy and calms wheezing.

Method:
1. Rinse and soaked the two type of fungus separately into two bowls of water till soft. Rinse well to remove any dirt, drained and set aside.
2. Bring the water to boil in a big pot then add in the drained fungus, red dates, ginkgo nut, candied tangerine and pandan leaves and simmer till it boils again.
3. Remove from heat, then transfer the mixture to a slow cooker and cook on auto for about 3 - 4 hrs, depend on the softness of the fungus to your liking. ( I let it cook for about 5 hrs because I like the fungus to be soft and the texture of the soup to be a bit sticky)
4. Add in the wolfberries during the last 1 hours of cooking time.
5. Sweeten it with rock sugar in the last 15 minutes in order to let the sugar melt completed and blend well with the fungus.

Notes:
a) I used the ration of 2: 1 white black to black fungus in portion.
b) I used those vacuum seal packed ginkgo nuts from supermarket.
c) According to my lady boss she told me that her Chinese Physician told her that it's best to consume this dessert early in the morning before breakfast or before noon time. Avoid taking this at night as it might cause clot in the blood vessels.