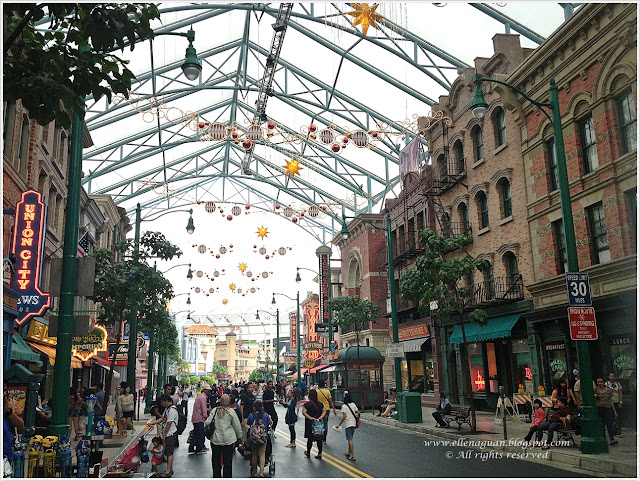 About two weeks back we went for our 2nd visit to Universal Studios Singapore (USS) which is located in Resort World Sentosa. And since during our first visit (read more here) we missed out quite a few rides especially the Jurassic Park Rapids Adventure (under renovation) and TRANSFORMERS The Ride (not ready in operation) we decided to head back again this December holiday to complete all the rides as well as to see the "snowfalls" event specially prepared for Christmas and festive season. 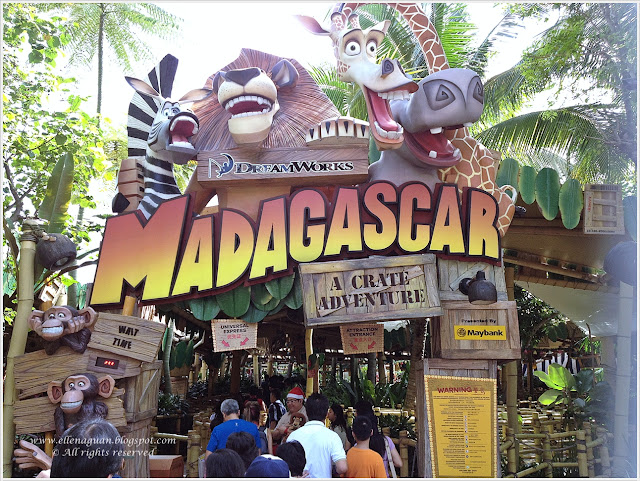 As usual, first we queue for the Madagascar A Crate Adventure which is a water ride located in the Madagascar zone where you could enjoy the ride watching the adventures of the Madagascar characters like Alex, Marty, Melman and Gloria and etc. This ride is first attraction on your left at the end of Hollywood zone. 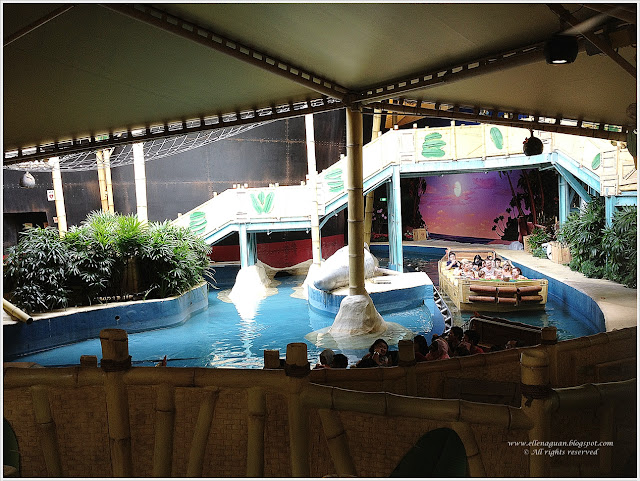 Inside view of the Madagascar A Crate Adventure boat ride. 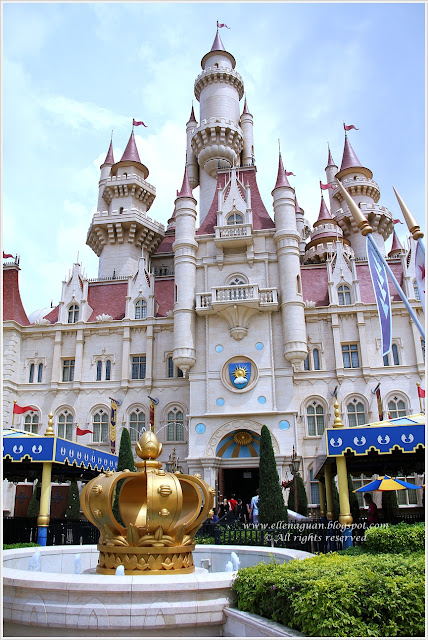 Next we head down to Far Far Away castle which showcases lifestyles of the rich and fairy tales and you could also enjoy the Shred 4-D Adventure ride to see, hear and FEEL the action right from your seat such as water, hairy spiders, wind and etc. 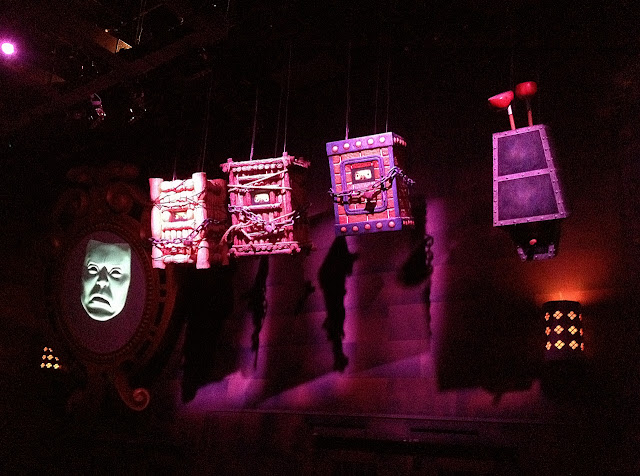 Preview of the dungeon entrance where park attendance briefing us on the storyline and ride details. 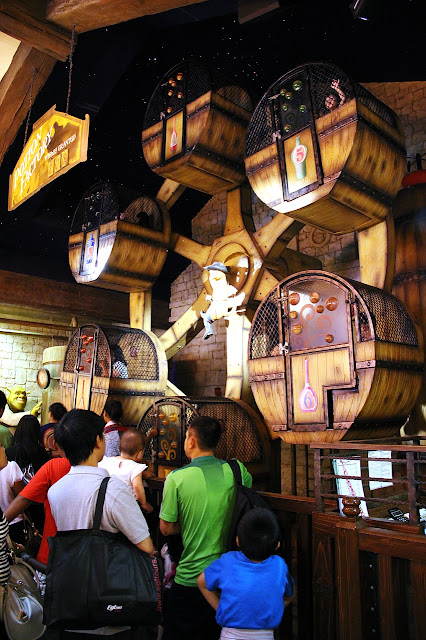 Waiting for our tun to take the Magic Potion Spin ride which is just outside the exit of the Shrek 4D theater. It was kind of a slow kiddy ride which allows about 2 - 3 person in one carriage. 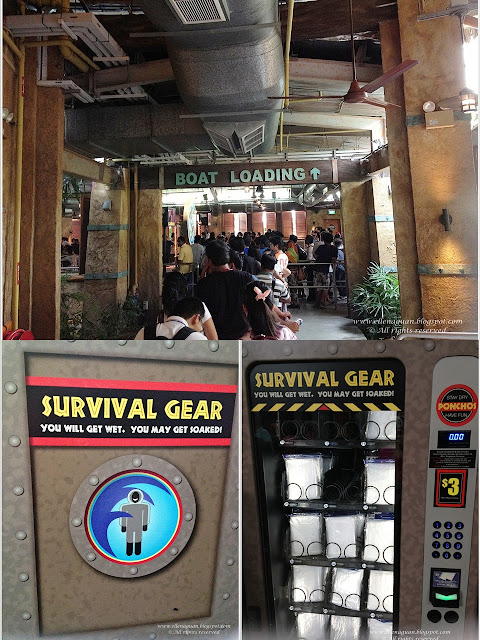 This Jurassic Park Rapids Adventure is one of the ride that we missed out during our first visit to Universal Studios last year (read more here) due to the renovation and maintenance of this attraction. The queuing time was quite bearable (45 minutes) during that day and we really hope to take this ride since we missed it out last round. And for those who did not bring along any "raincoat" like us, you could actually purchase it with S$3.00 (a bit pricey for a piece of plastic over you) at their vending machines. 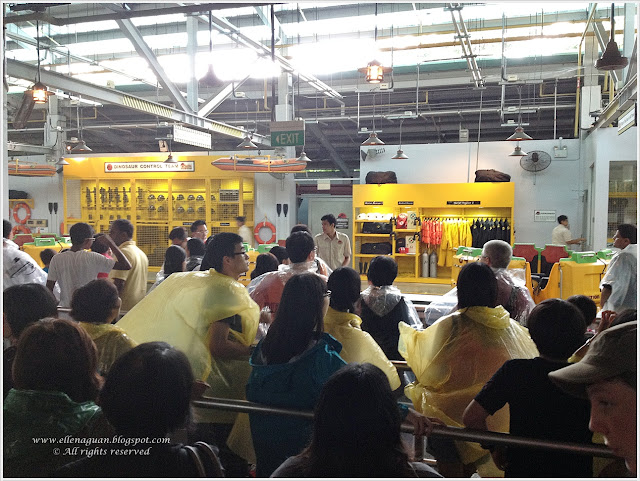 However half way through the queuing it started to rain and the ride was suspended due to safety reason. But despite of the rain most of the people still stay put in the queue hoping that the rain would clear up within 30 minutes or so.  Luckily after 30 minutes of observation since there was no thunder or lighting, they decided to open the ride and we get to ride on it even though it was raining. So that was indeed a super fun experience for us to ride this "water ride" on a raining day! Too bad we didn't managed to get a second ride after our WaterWorld show around 8.15pm due to ride maintenance. 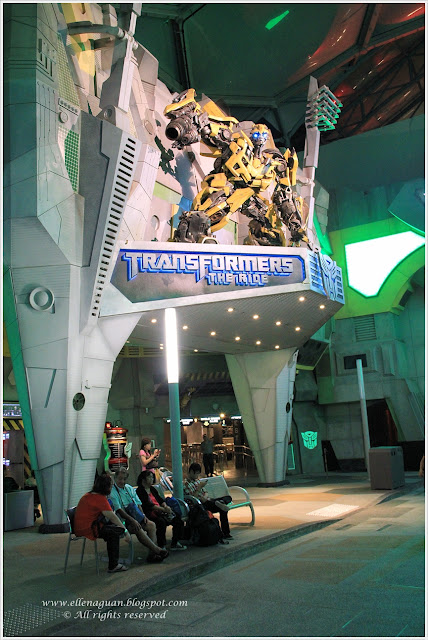 The second attractions that we missed out last year was this Transformers ride which was located at the SCI-FI CITY zone that was opened in December 2011. 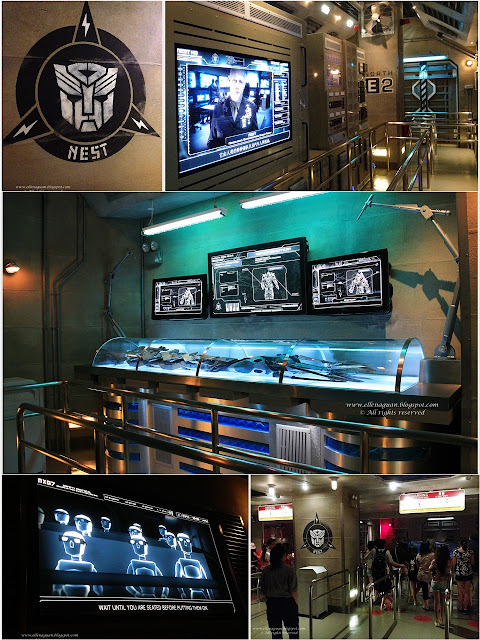 Due to the raining weather that day, we managed to get our 1st ride in about 30 minutes of queuing time whereas second ride at 5 minutes. The queuing area are well-design which provided guests with background information Transformers and some safety precautions of the ride.

Basically it is a motion rides with turnings, lighting, 3D effects and excitement which you won't want to miss out. And on peak season, you might have to queue up to at least 120 minutes just for the 5 minutes ride. 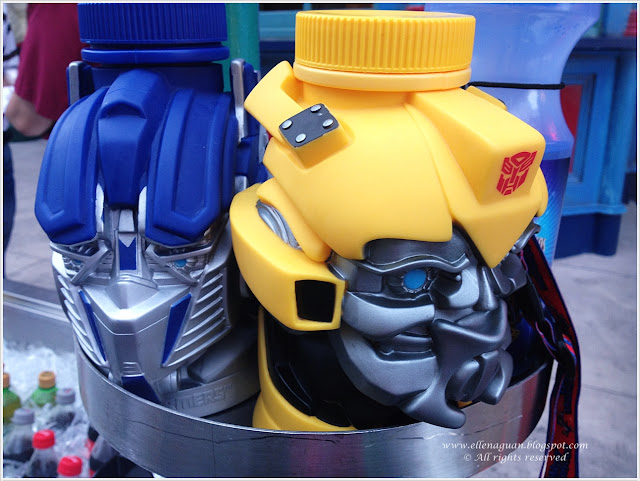 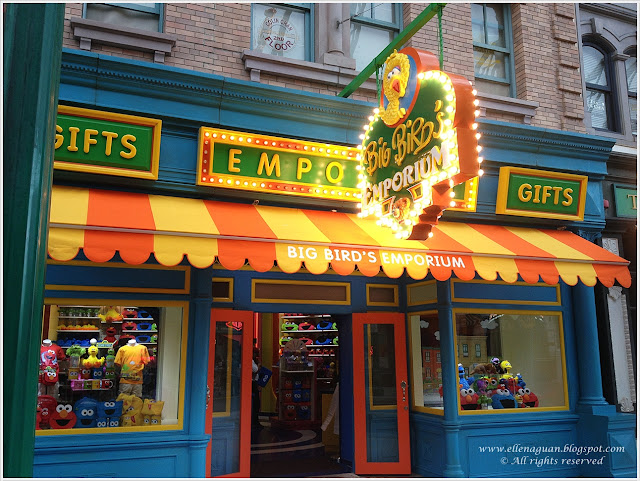 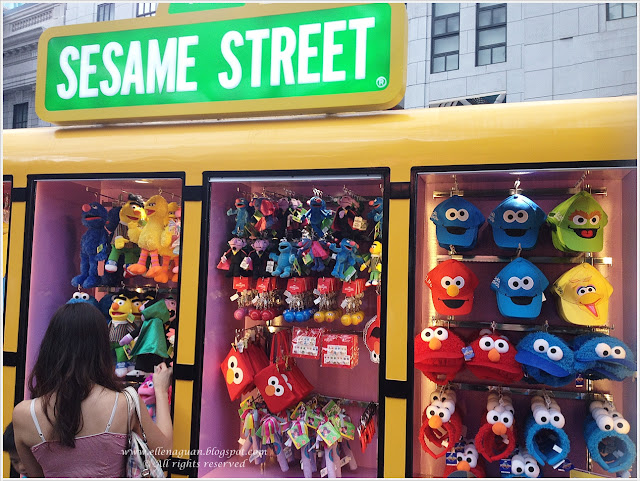 There is also a pushcart outside Loui's NY Pizza Parlor selling Sesame Street related items too! 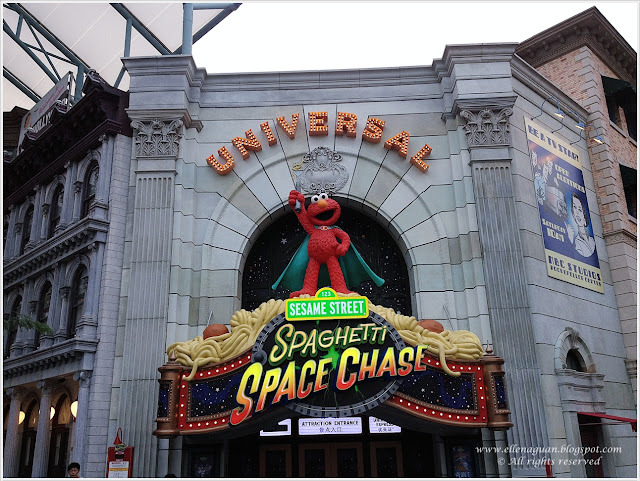 Soon maybe in 1st quarter of 2013, this Sesame Street Spaghetti Space Chase ride would be full operation too! Till then most of us are wondering what kind of ride this attraction will provided as it seems quite interesting and full of excitement from some of the Google search. 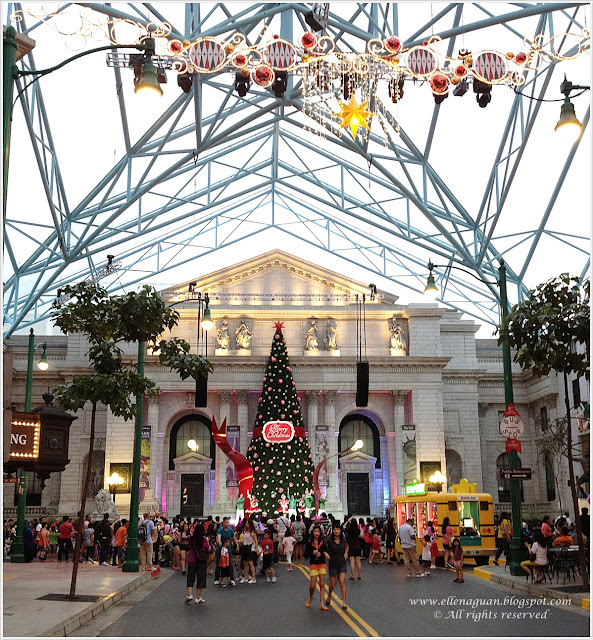 For this year they have relocated the Christmas tree and stage to NEW YORK zone instead of the usual place which was near the fountain area at Hollywood Zone.  And also for this year they included a daily special snowfalls event which happens on specific timing. 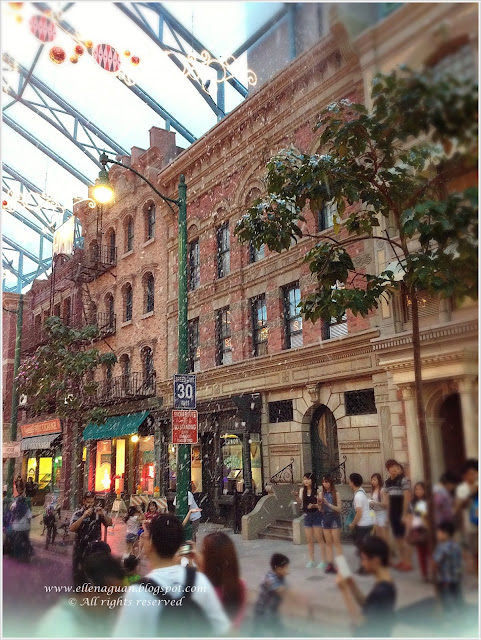 As you could see the snowfalls look wonderful at NEW YORK zone which makes it feel real and more magical as compared to the other zones. Everyone from young to old were so excited when the "snows (foams)" started to fall from the top during the specify timing. 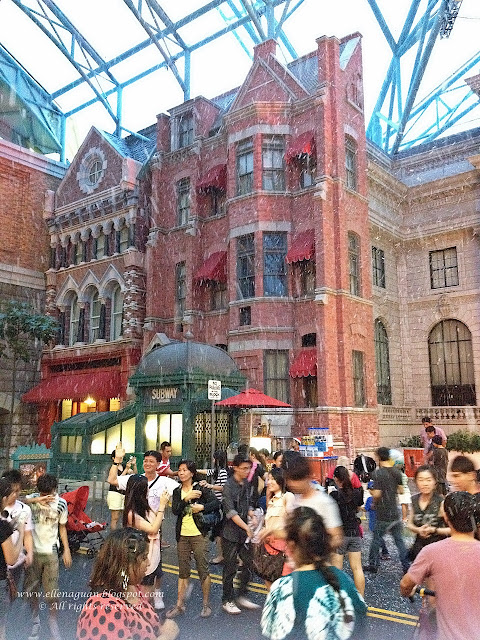 Each snowfalls last about 5 minutes from the varies timing from 1.00pm; 3.00pm; 5.00pm and around 6.45pm daily from November 2012 - 06 January 2013. Just in case of any chances, do check out the timing with the park attendance to avoid disappointment. 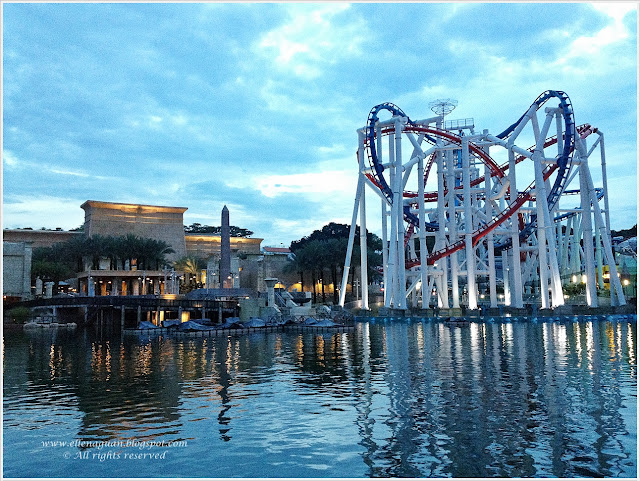 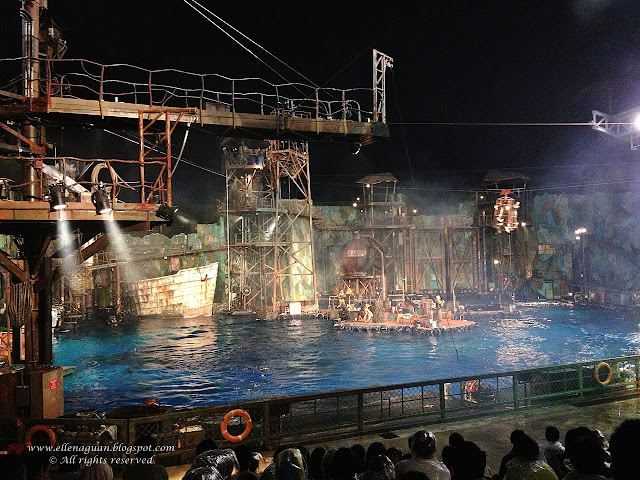 Since the park opened till 9.00pm (extension of operating hours due to festive season) during our last visit, we managed to catch the last WaterWorld showtime (7.30pm) before heading to our second Transformers Ride. 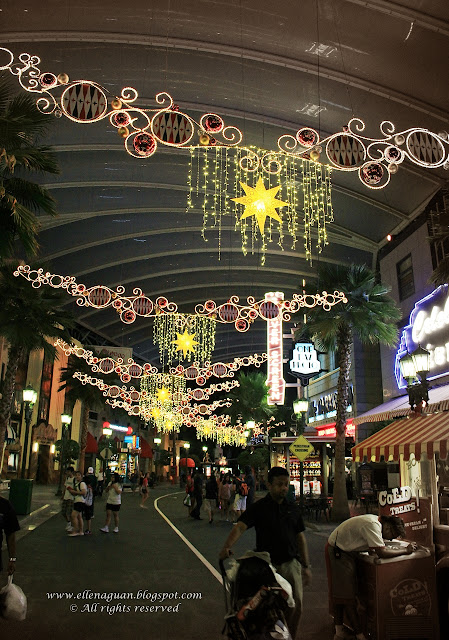 Although the weather was not very good (rain and drizzle) during the second half of that day but we did had an enjoyable day completing some of the rides in the rain (with raincoat on) and also the queuing time was shorten by big jump due to the gloomy weather and etc. And since the park opens till 9.00pm that day we really had a great time enjoying at least twice on each rides. Would definitely be back when the new attraction(s) are ready in another year or so.