Gosh, it's almost coming to the end of 1st quarter for 2015 and before we move on to new recipe posts. With that here are some recap of our Chinese New Year gatherings with relatives and friends whom I am bless to have them with us even though we might not get together often during the year. But thanks to the advance social media platforms we are still able to keep in touch with each other through texts, photos or even video clips in our cozy chat groups.


Every year we had early reunion dinner at our favourite Chinese restaurant located near Bedok interchange; Jing Long Seafood Restaurant together with my mum and the in-laws.

Starting with the "lohei" aks Yu Sheng (鱼生), everyone loves to toss the ingredients as high as possible to resemble prosperity and good luck. And most people believes the higher you toss the ingredients, the more luck you will received throughout the year.

To find out more about Yu Sheng as well as the auspicious meaning of its condiments, do refer to this link here.

With 8 person in total we ordered their 9-course set menu which included 1 starter (Yusheng), 7 main and a dessert. Surprisingly the standard for this year reunion dishes was quite good when compared to previous year which perhaps due to the date which is still a week before New Year Eve.

This year we had a swap of plan on new year house visiting so instead of joining Aunty Lily and her family for our usual new year eve reunion dinner we decided to have it with the in-laws so that we could attend another lunch gather on the next day.

Like every year mother-in-law will definitely prepares her signature all-in one pot dish which resemble Mini Buddha Jumps Over the Wall (佛跳墙) as well as ngoh hiang (hers is the flat version). Besides those we also bought along Yusheng from Men-Ichi Japanese Restaurant which was surprisingly good with generous amount of melt-in mouth salmon (18 slices) and yuzu sesame sauce.

It has being years back since our last visit to first uncle house and this year I am excited to be back and also shared some of my wonderful childhood stories about this place with my boy. Upon arrived, we saw Big Aunt had prepared a lot of ingredients for steamboat as well as some home cook dishes like Hainanese Chap Chye (stir-fry mixed vegetables), homemade dumplings, pan-fried rabbit fish, stuffed minced meat with fish maw and etc.


A mixture of home cook dishes plus steamboat items to kick off our dinner feast at uncle hock cheng house during the 1st night of Chinese New Year.

The Yu Sheng which was nicely assembled with Chinese Character "羊" that symbolized the meaning of goat year.

Although at time "lohei" might be quite messy when everyone gets into the mood of tossing the ingredients as high as possible to symbolized auspicious meanings. It is still a must have highlight event on the new year menu list. 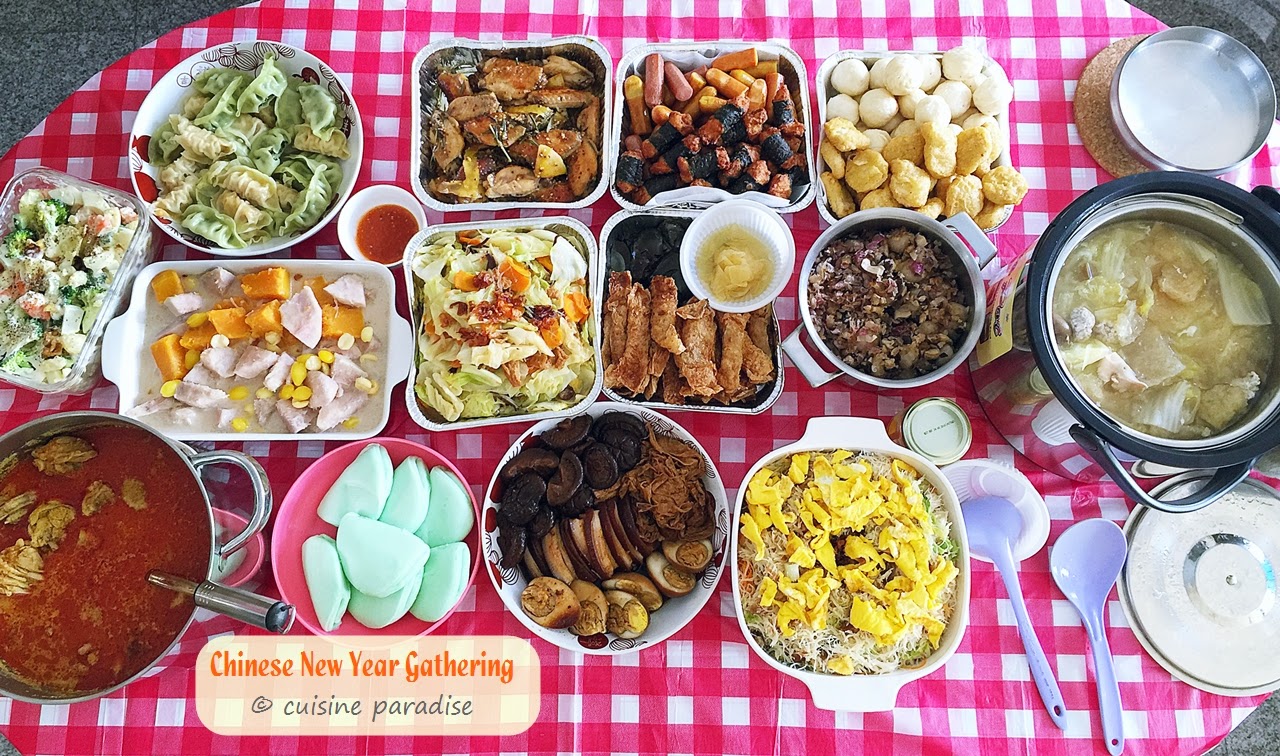 As usual Day 2 of Chinese New Year gathering was held over at my place because of the spacious area and kitchen equipments. To read up more on what we prepared on that day, do refer to the link here where you can find recipes of the dishes and bakes which we made too.


Like previous years Aunty Irene also prepared some of her signature dishes such as Chicken Curry, Stir-fry Chap Chye and my favourite braised sea cucumber with quail egg, fish maw and vegetables. On top of it there are also two new dishes prepared by cousin Sharon which were baked whipped potato with minced meat and Korean spicy rice cake.

Korean Spicy Rice Cake made by cousin (Sharon) whom is a huge fans of Korean drama and food. Her version of rice cake is made with ingredients such as omelette, cheese, harm and etc. This dish is well received and it's not too spicy when compared to the original one making is suitable for the kids or those who cannot take too spicy food too.

Mouthwatering butter cupcakes with assorted toppings and tiramisu with/without pitted cherries made by my two lovely cousins; sharon and verina.

Thanks for being part of my family and I am so bless to have each and every single one of you to be my uncle, aunt and cousin. Love you peeps~

Aunty Lay Choo is another great cook in our family who always feed us with her scrumptious dishes. And due to her generosity in both quantity and quality of food, everyone is always bless to have overflow of food whenever there is a gathering in her place.


After jumping ships from Neo Garden to eCreative for the past two years, Aunty Grace decided to change another catering service for this year due to their poor customer service and quality of food. So after sourcing round, she finally settle for Yeh Lai Siang. 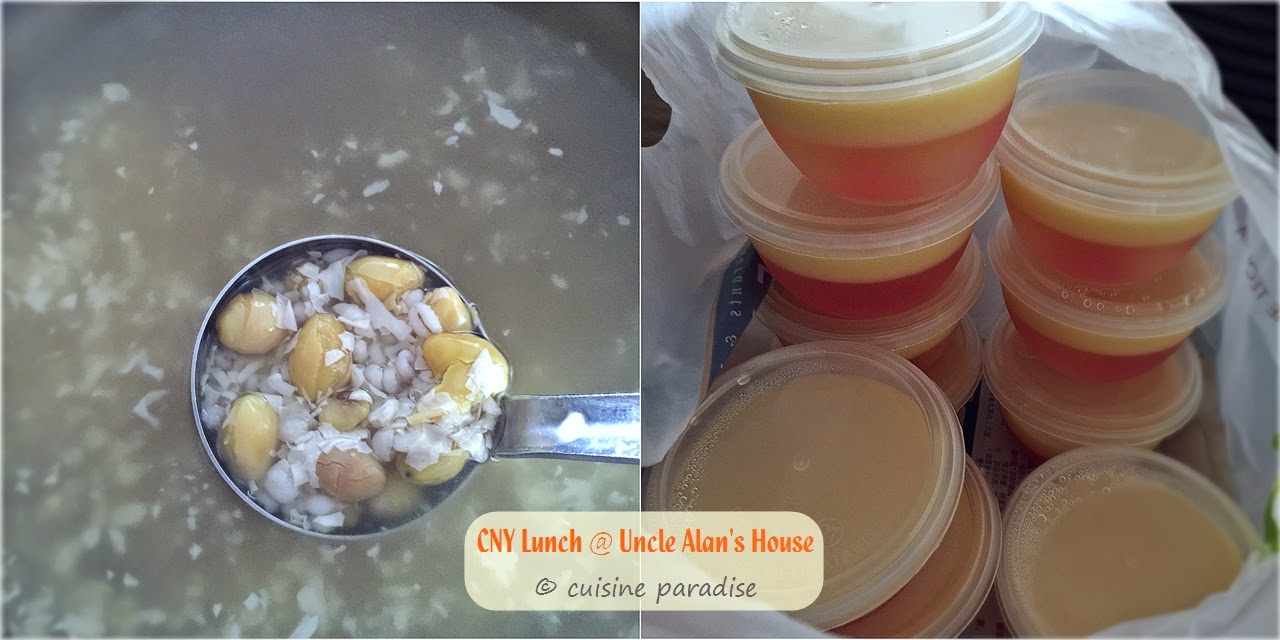 Perhaps due to festive season, quality of food wise was not that impressive. Like out of 10 dishes only 3 were consider good whereas the rest were average. As for the dessert instead pf Barley with Beancurd Sheet and Gingko Nut it was rather just a huge pot of sweet soup without much ingredients.

A short video clip on preparing the dishes


BC and I have known each for more than 10 years and we shared many wonderful memories as a "homemaker" during our days in Brisbane years back. At that time we love to explore new dishes and bakes whenever we get together because our house was just stone throw away from each other. And after being back in Singapore although we don't get to meet often due to work and family commitments but at time we still keep in touch and meet up during festive season to have meals together too.

Dessert for that night was Mango Sago with Pomelo because Thai honey mango is in season so it's good deal to make use of it when they are in peak. If you are keen in making this easy to prepare and yet expensive when consume in restaurant or dessert shop do stay tune for the next post as I would be sharing this recipe together with Mango Pudding soon.
Posted By: Cuisine Paradise