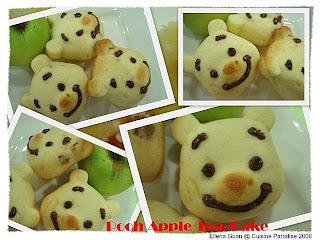 This is our Sunday afternoon Tea-Break which I specially made for Reyon using the Mini Pooh Silicon Mould that one of our friend bought for us from Japan. Since I have a few apples sitting in the fridge for some time, I decided to use ti to make this sweet and soft Pooh Apple Tea-Cake. 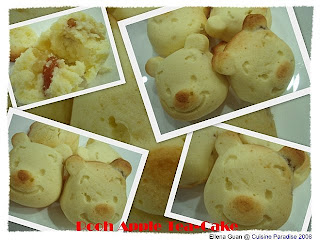 From the two pictures, which set of pooh do you prefer? The one with chocolate outline or the one without? As for me, I find that the colour of the end products are rather too pale compare to what it suppose to be. So I was joking with Reyon that these Mini Pooh is rather too fair and they need to go for some sun tanning........ :p 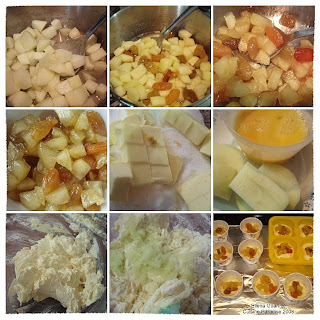 This Apple Tea-Cake is rather easy to make and it is sort of using the similar concept as the Mango Jam Cake where you put the filling in between the cake batter and bake. But before you start off with the cake batter you have to prepare the Candied Apple first. For my candied apple, I add in extra golden raisin and RUM to enhance the favour.

Methods:
1. Wash, peel and cored the apple, then cut into small cubes and place all the ingredients into a small heavy-based saucepan and cooked over medium low heat for about 15 - 20 minutes.
2. Stir occasionally and cooked till the apples cubes are almost transparent (like picture 3 on row 2 shown above) .
3. Remove from the pan and set aside to cool.

Methods:
1. Sift the flour and baking powder together and set aside.
2. Cream the butter and sugar together until pale and white. (after 5 minutes on medium speed)
3. Slowly fold in half of the flour mixture and give it a few stir till combined, then grate in 1 apple and lemon juice.
4. Give the mixture a few stir and then add in the second half of the flour and grate in the remaining apple and stir the mixture till well combine.
5. Next pipe or scold 1/4 of the batter into the muffin cup or mould then top with 1/2 Tablespoon of the candied apple and fill the batter to about 3/4 cup fill.
6. Bake in the preheat 180 degree oven for about 15 - 18 minutes, test it with a skewer around 15 minutes.

Notes:
a) This quantity fills about 12 medium size muffin cups
b) If you do not have any RUM, you can replace it with 80ml of Apple Juice