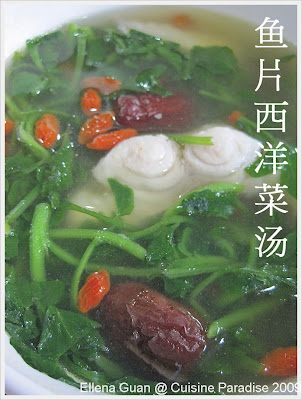 Watercress is widely used in either Asian or Western cuisine. Mostly in Asian countries, we used it to boil soup with different ingredients like chicken or pork ribs. It sometime refer to as a cooling soup for heaty weather. Whereas in Western cuisine, Watercress is usually eaten raw or appears as a garnish, in salads or on sandwiches. This is a great vegetables that is loaded with iron, calcium, folic acid and vitamins A. 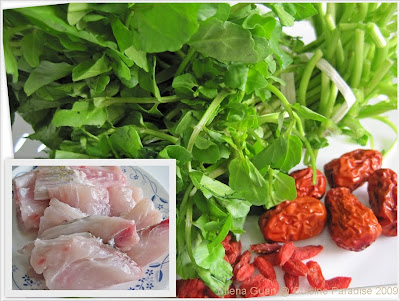 No matter which method you prefer to consumed this leafy vegetables. Today, I am going to share with you another way of cooking watercress soup with Fish instead of the common ingredients we used to add like "Chicken or Pork ribs". I am sure you will like this new way of preparing your usual watercress soup.

Method:
1. Cut off the stem portion of the watercress, rinse it well and reserve it for the boiling soup.
2. As for the leaves portion, removed those wilted leaves, rinse a few times to get rid of the soild and dirts then set aside for later use.
3. Clean and cut the fish fillet into big portion, marinate it with some cornstarch and light soy sauce and set aside in the fridge.
4. Cut the tailbone into halves, fry it with 1/2 teaspoon of oil and ginger slices till fragrant.
5. Pour in water and sprinkle some salt, bring to boil together with the watercress stem and red dates, then lower the heat and continue to simmer for another 20 minutes.
6. When done, strained the soup, add in the watercress leaves and boil briefly.
7. Lastly add in the marinated fish fillet and wolfberries, cook until done.
8. Season with salt and pepper serve hot with rice.

Note:
~ I bought the tail portion of sea bass from the wet market, and I ask the fishmonger to separate the tailbone and fillet for me.
~ For this soup, try to get a bunch of young watercress because of the short cooking time. 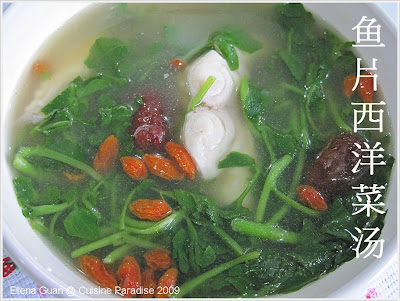 I have tried cooking a few version of the watercress soup in this blog before and this is indeed a new taste that you might want to try it out. It is full of Nutrition by adding fish and vegetable in a one pot soup. And I am sure this will add to your collection of making a new watercress soup than the usual one.