Garmin-Asus A10 vs A50 Smartphones 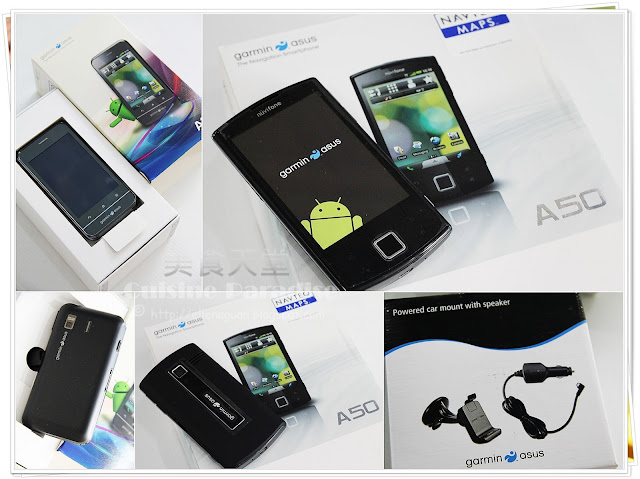 Recently I was invited by OMY blogclub to test out these two new navigation smartphones from Garmin-Asus together with another 9 selected bloggers (details HERE). Both these Garmin-Asus A10 and A50 (link HERE), built on the Android™ platform, which is a full-featured smartphone combined with Garmin's proven GPS navigation that brings people and places together either while walking, taking public transport or driving. 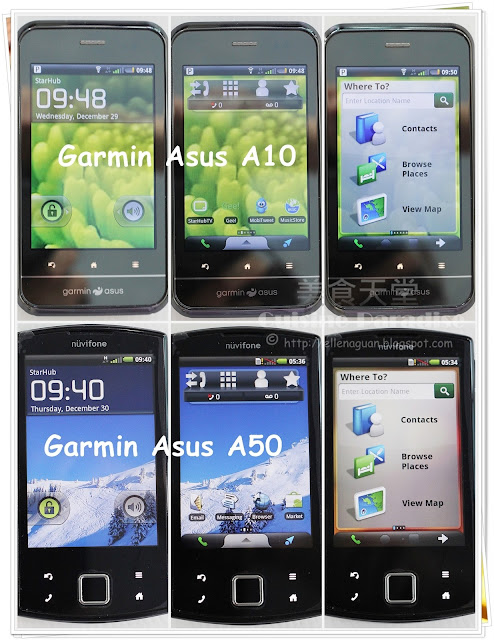 Both Germin-Asus A10 and A50 do have similar features and layouts but when comes to the physical phone itself they also have some slight differences. Example:- only the front cover of A10 is glossy while the back is attached with a matte texture case, which is totally different from A50. And for my aspect, A10 seems rather similar to IPhone 3 design from a certain angle at its' front view. While A50 on the other side has a wider screen with basic black glossy design that might draws possible demand from another preference range of user(s). 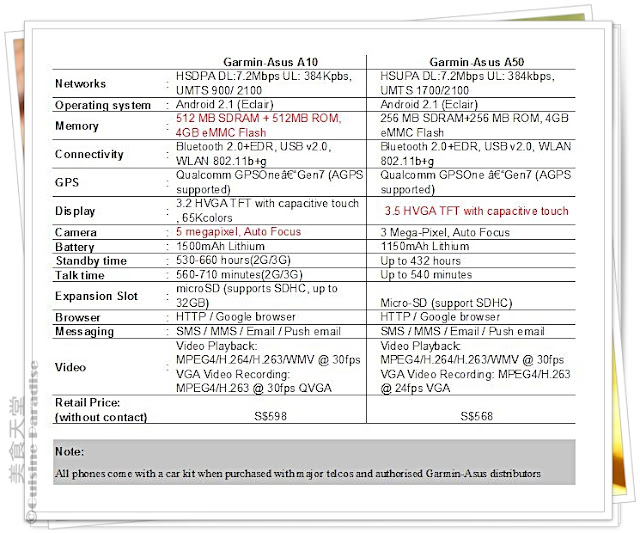 This simplify specifications chat above shows a clear glance between the main functions of Garmin-Asus A10 and A50 (link HERE). From this table user(s) could make a quick choice of whether to get a speedy A10 smartphone with 5 Megapixel Auto Focus function or settle for a slightly wider screen (3.5") A50 to satisfy viewing pleasure with a minor differences in price. 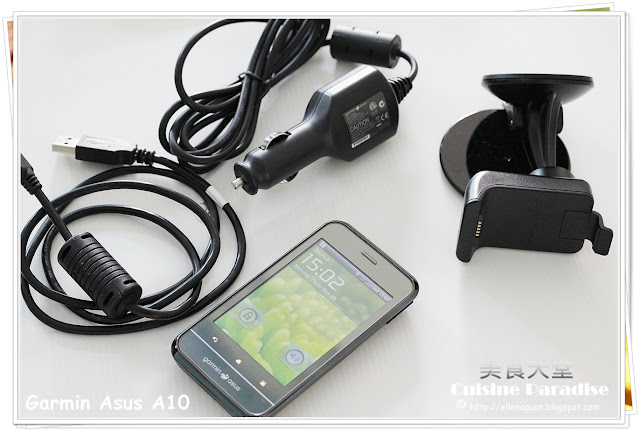 Each Garmin-Asus smartphone comes with a set of Car Kit in a bundle together with purchased of the phone from any major telcos or authorised retailers. The car kit comprises a powered audio mount that magnifies the volume of the handset’s voice commands too. This car mount also automatically switches the phone (either A10 or A50) to hands-free mode when it is locked in and records the final GPS location once the phone is removed in order to enable user(s) to navigate home at their parking locations with ease. 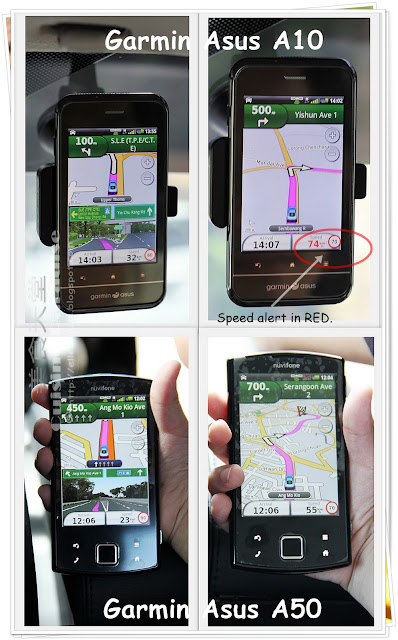 During Navigating both phones are intelligent enough to automatically recalculates the routes whenever there’s a detour and also provides a street view image if the route heads towards any junctions or split roads along the highway. From the collage photos above you would also notice there is speed limit indicator beside the Arrival Time on the bottom right-side of the screen which shows the current speed limit of the car and a little “RED” circle beside it that changes constantly showing the speed limit of the road. And if the driver(s) exceed the speed limit shown in the red circle the current car speed shown will automatically changed to RED in order to alert the driver(s) for speeding.

Another on road features about this Germin-Asus A10 and A50 are:- they would dims itself down and even appears on light saving mode during longer sections of the journey but once there is a turn or junction the screen will light up and the navigation lady would alert the driver(s) with audio message that still keeps the driver(s) sight forcus on road. But this audio navigation tends to fail once there is an incoming call(s) which is automatically answered in speakerphone mode when the phone is mouted on the car kit. 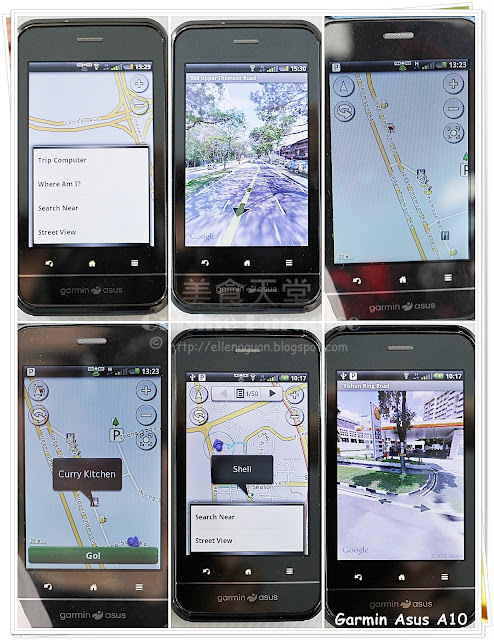 Further to the above, both Germin-Asus A10 and A50 features Google Maps™ with Street View, which enables user(s) or driver(s) to take a detailed look at their destinations even with labeled landmarks and icons before embarking on navigation. These smartphones also preloaded with NAVTEQ® map of Singapore and Malaysia with standard PND (Personal Navigation Device) functions such as turn-by-turn navigation and more advance features like Lane Guidance and Junction View that enable user to have a clear look out. 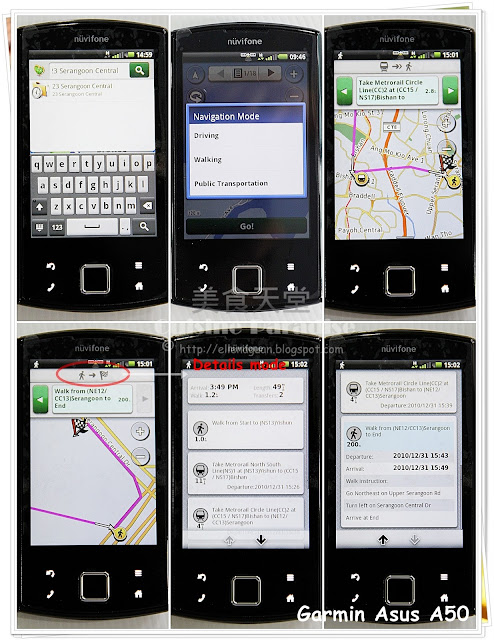 Searching for destinations would be quick and easy either through the Garmin Points of Interest database or location search from the network database. Simply just enter the address, hit Go and let the Garmin navigation do the searching and planning while users relax and complete journey with clear instructions of turn-by-turn voice navigation and 3D visual maps.

Here I do a simple test base on the "Public Transportation" function if driving is not accessible during peak hours or festive seasons. I input a search location for the phone to plan and plot a shortest way to reach my destination and above collage photo shows the steps and two different display modes (map or details) for the route. The details even document the departure and arrival time to the destination, walking distance, directions (if requires), number of transfer and etc that is very useful for a 1st visit to the input destination. 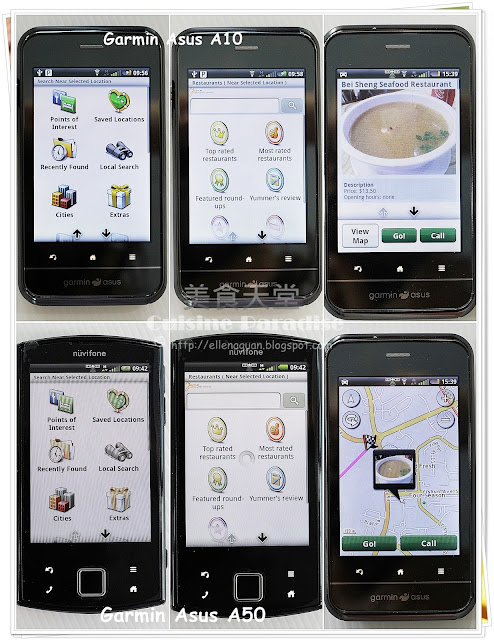 These phones are preloaded with maps and data for the region or country where it is sold. It also features Points of Interest that cover Petrol Stations, ATMs, Restaurants, Airports, Travel Guide and etc. In Singapore where there are all kinds of delicious cuisines spreading around island wide, it would be great for user(s) to tag on with the “Food/Restaurant” search function that is available in the both phones. With this easy guidelines food lovers could pick their choose of dining base on either the “Nearest Location”, “Top Rate Restaurants”, “Yummer’s Review” and etc to locate the best recommending food based on reviews and voting popularity. 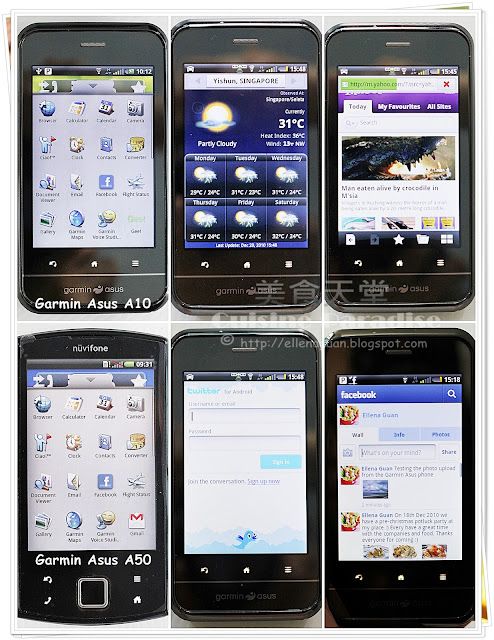 Other than being a navigation phone, both the A10 and A50 also preloaded with some latest Mobile Phone Apps and other useful functions such as “Twitter”, “Facebook”, “Google Browser”, “Weather Forecast”, “Movies” and etc that always keep user(s) on the move. 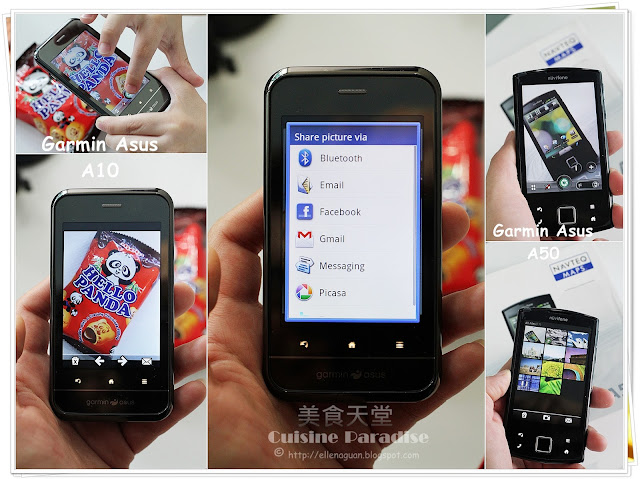 From the specification of the two phones above, Garmin-Asus A10 comes with a 5 Mega-pixel Auto focus camera compared to Garmin-Asus A50 which is only 3 Mega-pixel. Overall both the phones have almost similar camera function which is pretty easy to use and it also allows users to upload photos to social network applications like facebook and twitter or sending it through email and MMS. After testing the two phones, I personally feel that A50 was rather slow in speed while capturing and saving photos as well as in videos mode compared to A10 which is more speedy. 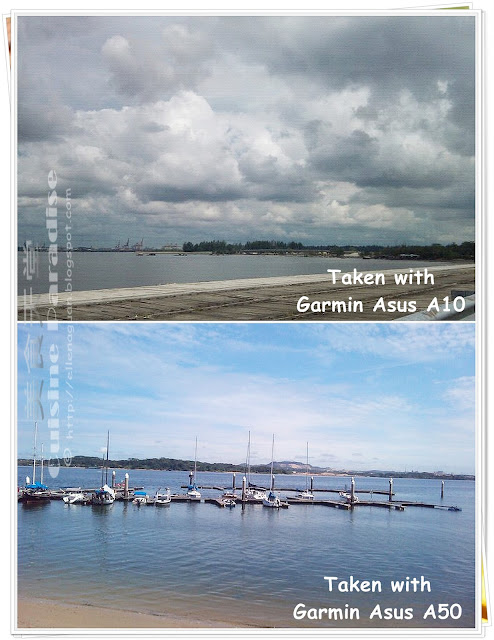 This two photos are taken using Garmin-Asus A10 (1st photo) and A50 (2nd photo). Some of you might wonder why with A10 5 Mega-pixel Auto focus camera the end-result still seems to be on the downside compared to the 2nd photo taking by A50. Perhaps that might just be some minor problem due to the weather and lighting which caused some setback. 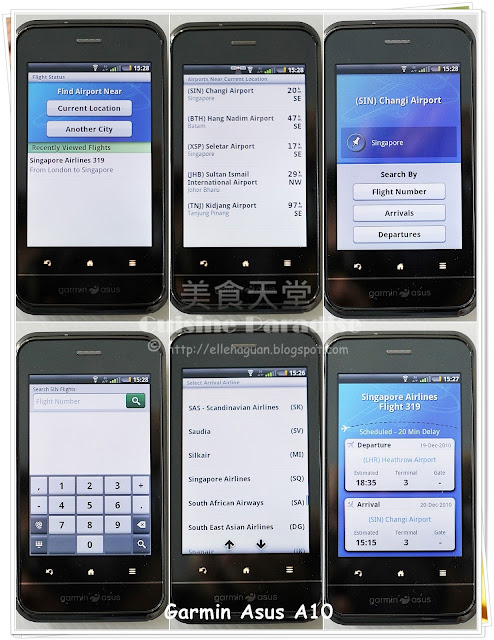 With the built-in "Flight Status" option that is available in both phones, user(s) can even get details on the flight arrival or departure timings from the worldwide airport based on trip destination. This extra function would come in handy for those who travel frequently in order to receive latest flight scheduled updates in a more convenient way. 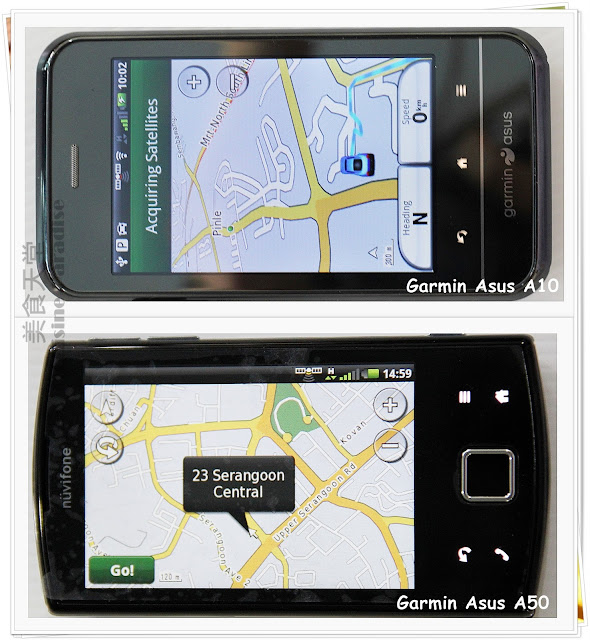 Finally for the conclusion, with the powerful seamless GPS navigation that are integrated in both Android 2.1 Garmin-Asus A10 and A50, user(s) can easily share current location via SMS, e-mail and other communication methods in a faster way. And after all the testing and comparison between the two phones, I personally feel that they do share a lot of similar functions and apps so with a minor differences of S$30.00 in retail price for A50 with a slight 0.3” wider torch screen, I guess most of user(s) or perhaps me would rather go for the speedy 512MB SDRAM with 5 Mega-pixel auto focus camera Germin-Asus A10 smartphone unless I am tempted with the phone design (slimer and lighter) or larger viewscreen of A50.