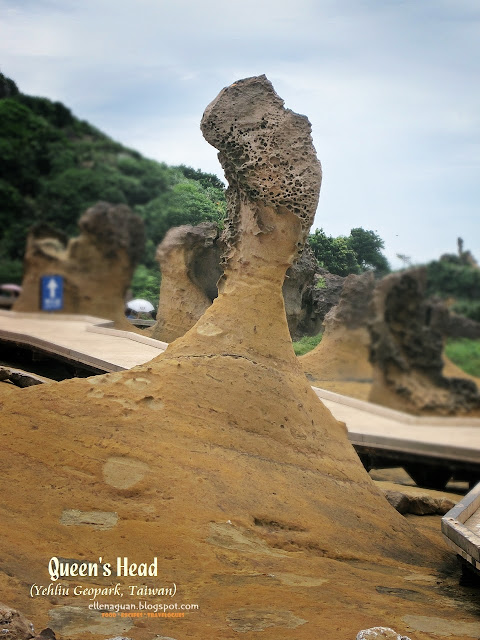 Day 2 of our Taiwan trip features places like Jiufen Old Street (九份老街), Yehliu Geopark (野柳地质公园) and Hsitou Monster Village (溪头怪物村) where we sit back and enjoyed the coach rides that bought us around the attractions. And moreover going with familiar group of tour mates (almost the same group of people from our previous Taiwan trip) and guide also makes planning of the itinerary much easier during the whole road trip.


Waking up feeling refresh after a good night rest for our stopover at Keelung , Harbour View Hotel (基隆華帥海景飯店) made it a great head start for Day 2. For breakfast we had Taiwan style porridge with side dishes such as pickles, peanuts, chicken floss, stir-fry vegetables and etc together with ham, bread and steamed bun.

After the hearty breakfast, everyone gets ready to move on to another town to start off with today's attractions around Jiufen, Yehliu and etc.


Jiufen was only an isolated village until 1893, when gold was discovered in that area. It is a beautiful town located at the top of the mountain near Ruifang district. The town soon gets popular after the filming of the movies “A City of Sadness“ in 1989 and Japanese anime "Spirited Away" which shaped the town into a tourist attraction.

Jiufen Old Street (九份老街 ) is one of the tourists attraction with local street food and souvenir stalls squeezing through the narrow streets on both side of the 2 – 3 stories traditional shop houses.

Located near the entrance of the Jiufen Old Street, this old 老友号芋圆 had being there since the 1st generation of the boss years back. According to the stall helpers, their taro balls (芋圆) are freshly made on the day itself and it comes in either hot or shaved ice version for individual preference.

And if you are fans of “blackball (黑丸嫩仙草)” this is a “must-try” dessert at Jiufen because their taro balls (芋圆 ) are more fragrant and “Q (chewy)” in texture as compared to those in Singapore.

Other than dine-in customers can also purchase their “uncooked” dumplings in assorted flavour like yam (taro), sweet potato and huai shan (淮山) which packed in a box at around NT$60 (SG$2.50). Even though we love to get a packet or two back home as gifts but then since it was only our 2nd day of the trip we just have to give out that idea.

Further down the street you would find Chiu Chunt Dint Inn (九重叮民宿) which was established in 1996 and the themed of the inn mainly focuses on the past of Jiufen. The interior decorations of the Inn were equipped with antiques and classic songs that lead guests way back to the era of 1970s-1980s.

Besides that, guests can also enjoy traditional cuisine at the restaurant located on the 2nd floor or enjoy a fantastic view of Jiufen’s mountain and sea scenery on the 5th floor. Whereas for those who are keen to stay for a night at Jiufen, Chiu Chunt Dint Inn also offers comfortable rooms that are located on 3rd and 4th floor too.

Other than taro balls, there is also a famous Handmade Fishball Soup (九份传统鱼圆) stall near the entrance of the food street. The soup broth is fragrant and tasty and their handmade fish balls are very bouncy too. As we arrived quite early in that morning, most of the stalls are still preparing their food so we don't get to try as many things as what we did like our trip. But if you are going in the afternoon, be prepared of the tourists crowds and at the same time enjoy their yummy street food too.

Despite of the raining weather, my two "models" still happily request to have their photo taken before heading up the coach for another destination.

After the stopover at Jiufen Old Street (九份老街) which is in Ruifang District near to Keelung (基隆市), we continue our coach ride to Yeliu Geopark (野柳地质公园) to widen our knowledge on their sedimentary rocks and its amazing views along the coastline.

At Yeliu (野柳) there is a well-known Yehliu Geopark (野柳地质公园) which is about 1.5 hours coach ride away from Taipei. And the distance measured from the entrance of the Yehliu Geopark to the end of the cape is about 1.7 km which might be quite a long walking distance for some elder folks.

For your information the park opens daily from 07:30 to 17:00 all year round and tickets can be purchased at their ticketing counters near the entrance. During May - September the park also extended their visiting hours too. Please refer below for the entry fee:

When visiting the Yehliu Geopark, tourists often being attracted to the "Queen's head" which is the most famous mushroom rock in Yehliu. And according to our tour guide; Tony the neckline of the queen's head seems to get thinner and thinner each year and somehow it might just break off anytime in a couple of years down the road.

The elephant rock behind (submerge in the water) is the lime concretion which being formed under the influences of differential erosion. There is a legend saying the fairy forgot to bring the elephant back after she defeated the turtle which resulting the elephant being waiting and refused to go ashore.

Although this was our second visit to Yehliu Geopark but the magnificent views of those beautiful rocks still look great and we just cannot resists ourselves to snap a few more photos back as memories. And also due to the gloomy weather, it makes our presence with those rocks look so poster feel.

After spending an hour or so at the Yehliu Geopark, we had seafood lunch at Mei Guan Yuan (美观圆海鲜餐厅) which was the same restaurant we dine-in during our previous trip there. To our surprised when the food arrived it was almost all the dishes as what we had two years ago (our 2010 Taiwan trip). My boy on the other hand who heard our conversation made a joke that perhaps even in ten years' time when we revisit this restaurant the dishes might still be the same as what we had on that day. 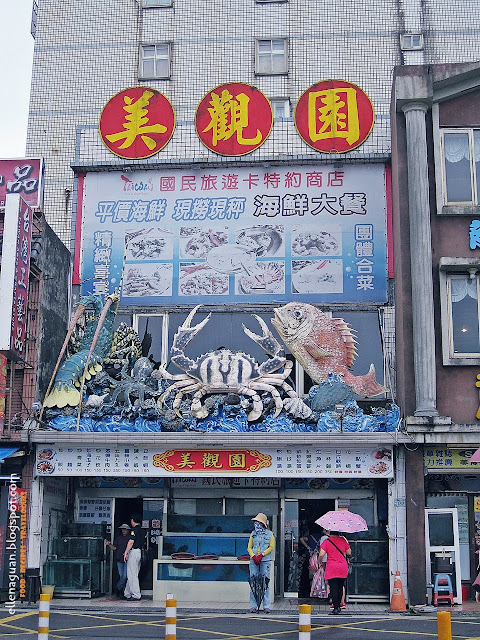 Overall both the quality and quantity of food that they served are still quite pleasant for a varieties of 10-course seafood lunch. Even though nothing fancy about those dishes above but they do have a special country food charm that lure our heart.