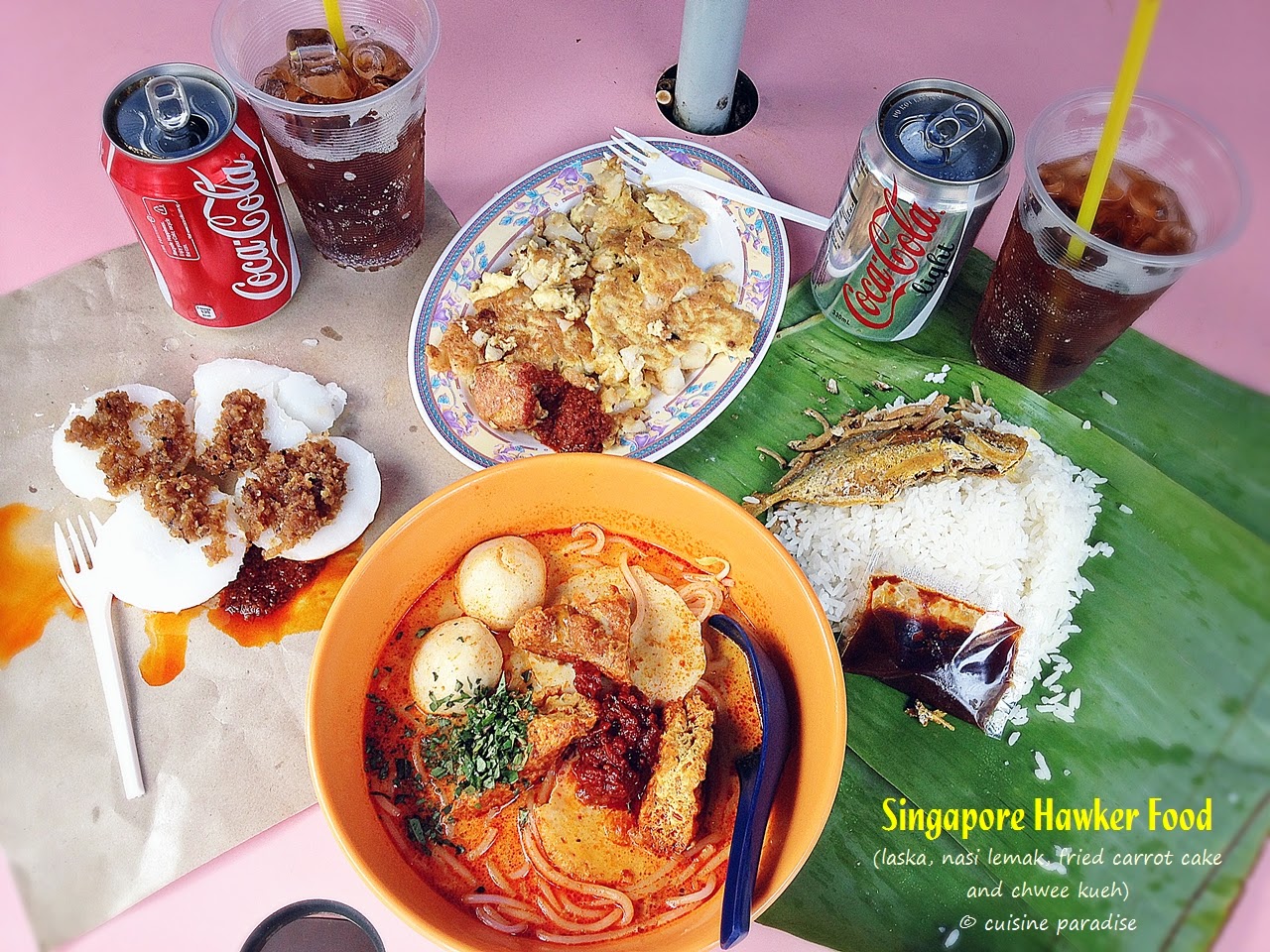 As a Singaporean like many others out there who loves food we are also willing to travel from North to South or East to West just to enjoy our favourite hawker dishes. And despite the heat and smoky environment from its non-air conditional environment we are happy to soak ourselves in the aroma of chicken rice, char kway teow, BBQ chicken wings and etc that floats in the air. 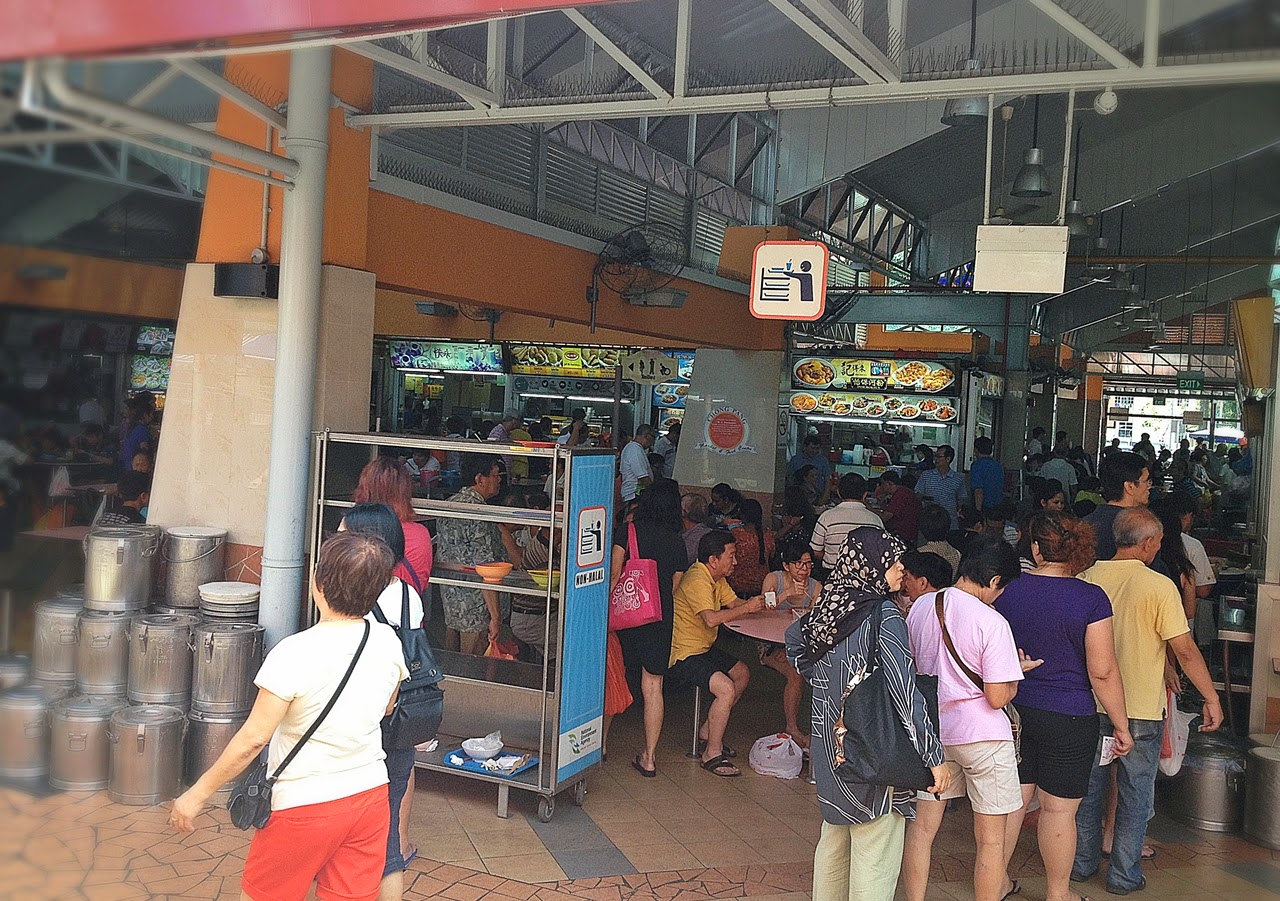 In this post I would like to share some of our family favourite Hawker (food center) Food which we enjoy having it right from the stalls regardless of the warm and stuffy dining environment because some food are not meant to be eaten cold or takeaway.

Char Kway Teow (炒粿条)- This fried noodle is one of the popular Singapore hawker dishes which cooked using flat rice noodles together with cockles, fish cake, preserved Chinese sausage and some greens. Personally I preferred the slightly sweet version with more sweet soy sauce in it.

Chwee Kueh (水粿) - An easy snack that can be eaten anytime of the day. Chwee Kueh is a small steamed rice cake topped with preserved radish which has be fried till fragrant. Although at a glance it might looks greasy due to the radish toppings but without it this dish will be tasteless. So at time like this, enjoying it with a glass of coke will be great.


Hainanese Chicken Rice (海南鸡饭)- Chicken rice can be considered as one of the staple food in Singapore because it is commonly available in places such as hawker center to high-end restaurants in hotel. And you can have it anytime of the day as breakfast, brunch, lunch or dinner.

Besides ordering the usual poached / steamed white chicken, there are also other options such as roasted or braised dark soy sauce chickens to tempt your taste buds..

Kway Chap (粿汁) - It is one of the Teochew (a local dialect group) dishes that serve with flat, broad rice noodle sheet in soup broth made with dark soy sauce. To go with the noodle sheets, there is a main dish which includes pig offal, braised beancurd and beancurd puff, preserved salted vegetables, braised hard-boiled egg, pork belly and etc.


Here is a short clip of the items available for Kway Chap.


Laksa (叻沙) - There are a few versions of laksa available but the most common ones in Singapore are Curry Laksa; which basically cooked in coconut based curry soup or Assam Laksa which is a sour fish-based Penang version. A bowl of curry laksa is often made with ingredients such as beancurd puff, fish cake, shrimp, cockles but sometime hard-boiled egg is also included too.

For my personal preference I usually add extra chilli paste and laksa leaf to enhance the flavour so here is when I will need a glass of coke filled with lot of ice to cool down the heat.

Mee Rebus - This Malay style noodle dish is made using yellow noodle served in thick spicy sauce made from fermented soy beans. It is often serve together with a hard-boiled egg and spoonful of fried beancurd or beancurd puff. Remember to squeeze in some lime (calamansi) juice to enhance the taste of the gravy.

Roti Prata - Prata which mostly sold by Indian Muslims at coffee shops or hawker centre is another popular breakfast items apart from the economical fried bee hoon. This Indian style pancake has a crispy outer layer with soft and fluffy texture beneath and it is often serve with sugar and curry sauce (either chicken, fish or mutton). Between the prata shown above is with egg and onion fillings instead of the normal plain prata.

Yong Tau Foo (酿豆腐)
Yong Tau Foo which is one of my favourite lunch pick comes with different variety of items made using fish/meat paste sandwich in between beancurd puff, tofu and vegetables like eggplant (brinjal), bittergourd, chilli, mushroom, beancurd sheet and many more.

You can order either soup or dry version according to your preference but personally I would preferable to have the soup version because of their flavoursome soup broth that made using anchovies, soy bean and etc.


Lastly to our dear readers and friends who are residing in overseas we will continue to update you peeps with more of the Local Singapore Food in another related post soon. Till then have a great week ahead.


*This article is brought to you by Coca-Cola®.
Posted By: Cuisine Paradise