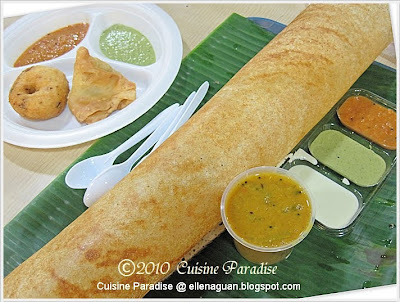 Komala's Restaurants are Singapore based restaurants-chain serving Indian vegetarian cuisine for its low priced and high quality of Indian food. There have different branches all over Singapore with stalls located in either Coffee Shop or Shopping Mall Food Courts. There is a Komala's vegetarian stall located at the basement food court of North Point Shopping Center just beside another famous Indian Banana Leaf Biryani Rice. 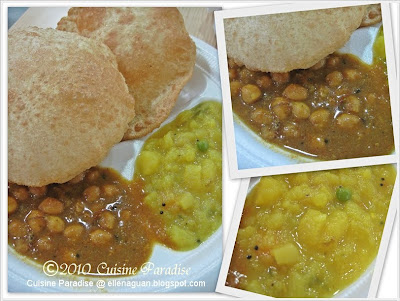 Till now we have only tried their Poori Set and Masala Tea which is quite suitable for our taste buds. Poori is a unleavened Indian bread that is served with Potato Masala or Chana Masala(chickpeas in it). 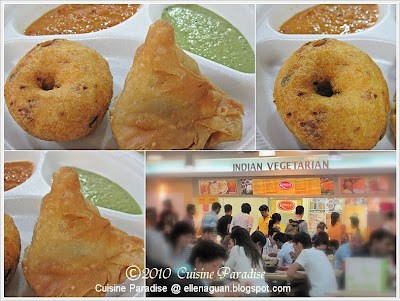 Before the main course, let starts off with some Indian finger food such as “Vadai” and “Samosa”. While queuing up for my orders, I saw these piping hot snacks coming out from the kitchen stoves so without hesitate, I also ordered one each to try out their varieties. Personally I prefer the Samosa more than the Vadai which is sort of like a deep-fried donut. We love the crispy outer skin of the samosa which is made from crust pastry instead of spring roll wrapper or flaky pastry. 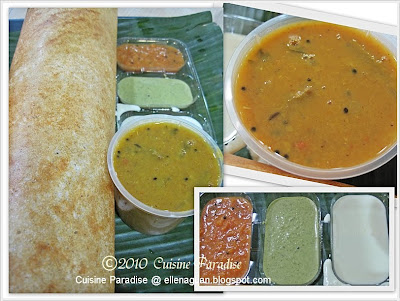 All along mum and aunt were curious about the taste of Dosai which we always saw a lot of customers ordering it. In short Dosai is actually a crepe made from rice and black lentils which is a typical dish in South Indian cuisine that is rich in carbohydrates and protein. Here we ordered the “Paper Masala Dosai” that is filled with mashed potato and other vegetables like onion and green peas. This is served with coconut sauce (white in colour), onion (green in colour) and sambar (a kind of vegetable stew). The Dosai itself is really paper thin which is crispy on the outside and yet moist and soft when eaten. Overall it taste ok with all the different type of dipping sauce except we find it rather a bit salty towards our taste.

But accordingly to some of my friends, Dosai is not supposed to taste very salty when eaten. So I guess either the chef has added too much salt for my order or basically I am not those who can take savoury food :) 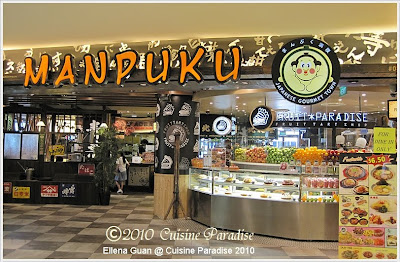 I am sure most of you are familiar with "Manpuku" which is located at level 3 of Tampines 1. This Japanese Food Mall was once flooded with crowds when it first started early last year. According to some read up, this place can hold roughly about 500 seats which is consider a big mall with 10 different food stalls selling all kinds of Japanese food, dessert and drinks. 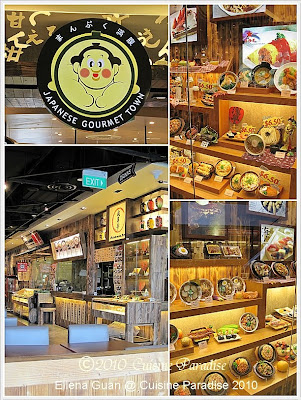 Today I was meeting up an old friend for lunch whereby she suggested that we can have lunch over at Manpuku. At first, I was quiet shock as because I ask her that isn’t it will be too crowded to fight with the lunch crowd at this food mall? But she told me that I would be surprised to see how empty the place is compare to what it is before. Now they also do away with the “card” system and customer can just walk in and order from whichever stall and just make payment.

Although their business might not be as good as before, but I was kind of attract to their window display outside the shops and interior decoration in the food mall. 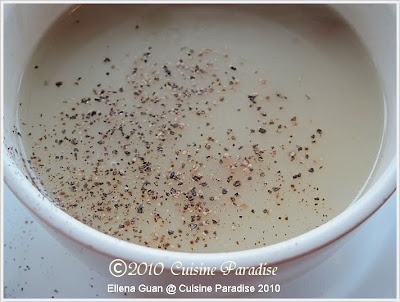 After going round the food mall, Tracy settles for the Kimchi Chicken Ramen while I went over to “Hokkyokusei Omu Rice” stall and get a set of their promotion Mixed Sauce Omu Rice with Mushroom Soup for S$7.50. The mushroom soup was kind of diluted I guess that is what to expect for the price of S$1.00. 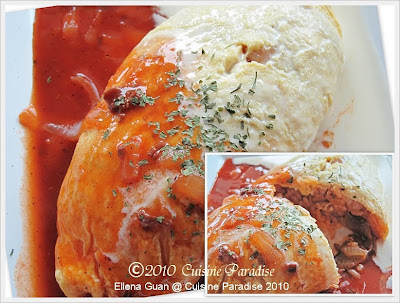 “Mixed Sauce Omu Rice” is just Japanese fried rice wrapped with omelette then drizzle with half each of tomato and creamy sauce. Overall I find the sauces still goes well with the rice and since both rice and eggs are my favourite item I am quiet satisfy with the dish too. But Tracy on the other hand mentioned that it was rather not worth to have just rice and egg with sauce for S$6.50. 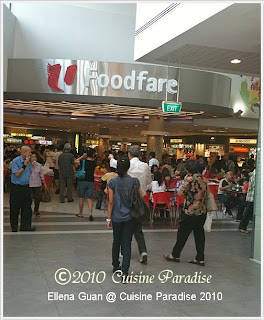 There are about 6 NTUC Foodfare outlets located at different parts of Singapore such as at Simei MRT, Rivervale Mall, Admiralty MRT and etc. Today the outlet that we went to is located at the 3rd level of Ang Mo Kio Hub. You can find a large varieties of food like Chicken Rice, Korea/Japanese Food, Fish Soup, Wanton Noodles, Dim Sum and a lot more. I am sure you can find something that you like over there. 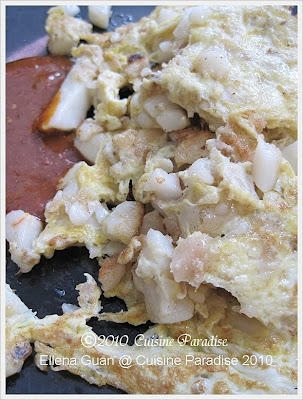 While roaming around to look for our brunch today, I decided to get a plate of this Chai Tow Kway which is also known as "Fried Carrot Cake - 菜头粿". In Singapore, there is two version of fried carrot cake which is either "Black" or "White". The Black version is usually rice cake fried with garlic, eggs and thick sweet soy sauce. While the White version which shown on the photo above does not use any sweet soy sauce and the carrot cake is fried on top of the beaten egg to form a nice golden crust. Sometime they are served with some extra chilli and spring onion accordingly to individual preference. 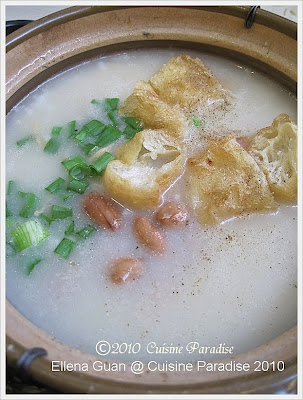 While waiting for the Fried Carrot Cake, I was attracted to the Congee stall next to it. Other than selling different varieties of Claypot Congee, this stall also have a few Hot Plate with rice dishes. Since it is brunch, I decided to try their "Hong Kong Style Porridge" which cost, S$4.90 per claypot. 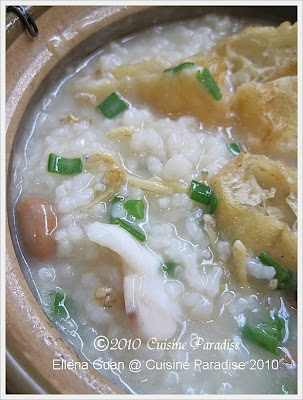 There are a lot of ingredients in it such as fish slices, peanut, ikan bilis, scallop, cuttlefish and fried fritter - 油条. This porridge texture and taste of this porridge is kind of different from the normal Cantonese porridge which those creamy texture. As you can see from the photo, you still can see grain of rice in the porridge and it's very fragrant and tasty due to the added ingredients. 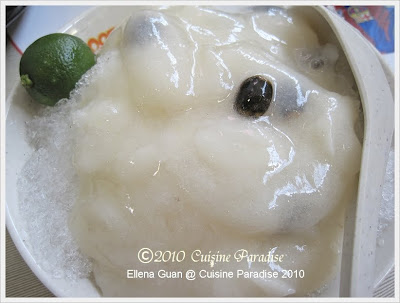 Due to the hot weather recently, most of the drink stalls are always packed with long queue of people. Even the drinks stall at this Foodfare is also packed with crowds getting their drinks, desserts or toasts. While getting our drinks, I spotted mum's favourite Soupsop dessert which I think she would love to have it for after meal dessert. But I was kind of disappointed that those shaved ice is actually more than the soursop topping which make this dessert kind of expensive for the price of S$2.00. 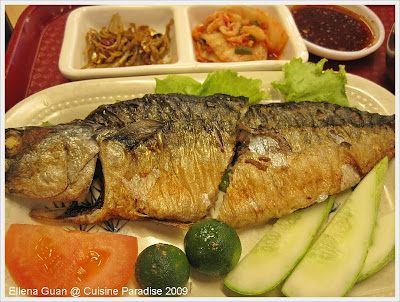 Today we are around Suntec City, Carrefour to get some groceries. As it is around lunch time, we decided to stop by at the basement foodcourt which is nearer to Carrefour for a quick bite. After eying around the various food stalls, we settle for the Saba fish meal (鲭鱼) set. Some people also called this Saba Fish, "Mackerel" in English. 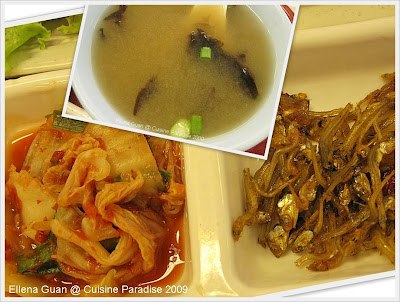 Other than the Saba Fish, this set also comes with a small portion of Kimchi, fried spicy Anchovies (ikan bilis) and a bowl of Miso soup(with some Wakame in it). 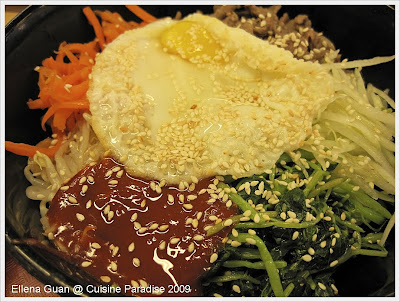 Bibimbap is a very common and yet popular Korean dish which also refer to as "Mixed Rice". It is usually a bowl of warm white rice top with seasoned vegetables, meat such as beef/chicken, chilli pepper paste(gochujang) and a fried egg. Sometime, they will sprinkler some extra sesame seeds to enhance the fragrance. And the traditional way to eat this dish is to stir all the ingredients together thoroughly before eating.

Overall this stall serves an above average standard of Korean Food which is at a more lower price compare to some Korean Restaurant. So do give this stall a try if you are happen to be in that area :) 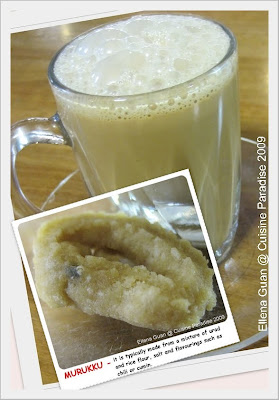 Teh tarik or "拉茶" in Mandarin is a hot tea beverage which can be commonly found in restaurants, outdoor stalls and kopi tiams in Malaysia, Singapore and Brunei. The derived from the pouring process of "pulling" the drink during preparation. The mixture is poured back and forth repeatedly giving it a thick frothy top. The purpose of doing this is said to cool the tea to drinking temperatures, and helps mix the tea with the condensed milk more thoroughly.

You can even choose the Ginger flavour Teh Tarik if you like to have something more spicy and consists of that extra ginger fragrance. Some of the stall also severs it with an extra piece of Murukku which is made from a mixture of urad, rice flour, salt, and flavourings such as chili, or cumin. 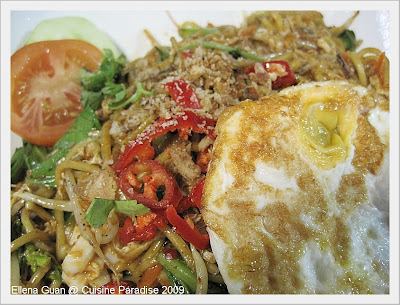 Mee Goreng meaning "fried noodles" is a dish famous in Indonesia, Malaysia, and Singapore. It is made with thin yellow noodles fried with onion, fried tofu, chili, vegetables, tomatoes, and egg. It is commonly available at stalls in Singapore & Malaysia and is often spicy.

You can find many different preparation styles of Mee Goreng in Singapore, e.g: Malay style(which is shown above), Indian sytle (click link to view picture) which is more reddish in colour and Chinese style (click link to view picture) which consists of prawns and etc. No matter which type you prefer, I am sure there is one that suits your liking .

This is one of the famous Indian cuisine store located in the North area, inside Northpoint Shopping Center. It had being there for about almost 10 years I guess, I have started eating their Chicken Briyani since my secondary school day and only until today then I realise that they have actually changed their store name. I wonder is it still under the same management as before......... 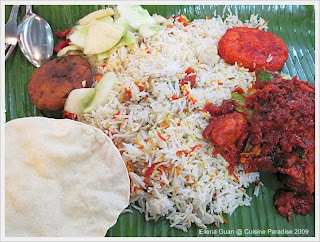 They have a lot of variety choices such as mutton, chicken, fish, big tiger prawns and etc at a affordable price range from $5.50 to $8.00. And if you are a vegetarians, don't worry they cater for vegetarian sets too! So far, I still prefer their Chicken Briyani set and it's really a huge serving which you can't probably finished it alone. 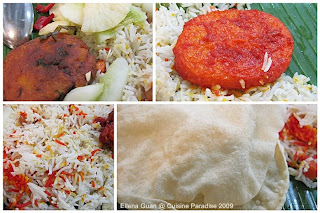 For us, usually we will order 1 set and add one some side dishes like fishcake, potato cake, sambal egg or extra vegetables so that we can share between two person. 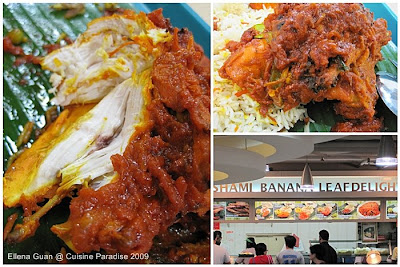 Personally I loved their Briyani chicken which is tender, juice and the gravy is full of fragrant and brusting favour. It goes really well with their Briyani rice which is cook to the right texture. So if you are staying in the North area, do give this stall a try. You will sure come back for more....... but you have to beware of the long queue during lunch and dinner hours.