Time past really fast during festive season, last Sunday we just had our Reunion Dinner @ Si Chuan Dou Hua and today we are having another New Year lunch organised by Aunty Lily's family @ this "Famous Crab King Seafood Restaurant" which is located at "Marina South Pier - 滨海南码头". 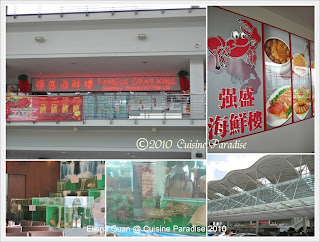 "Famous Crab King - 强盛海鲜楼" has two branches in Singapore which is located in Toa Payoh Industrial Park and Marina South Pier. According to those who frequent these branches, they do have a solid reputation for providing fresh, quality food at reasonable prices. Marina South Pier branch is located on second storey of the pier and it's has an excellent view on the harbour despite you are dinning in the air-conditioning room or balcony view which you can enjoy the sea breeze/scenic while having your meal.

Upon arriving at the restaurant, we find that the dinning atmosphere was great with the harbour view clearly seen from the inside of the restaurant as well. Beside the that, they also have a few tanks of live seafood showcase at a corner near the kitchen area. 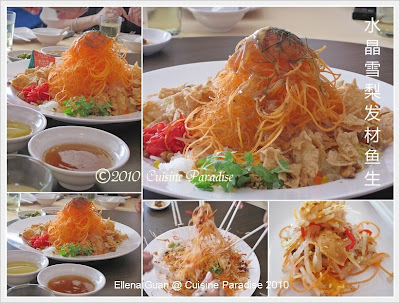 As usual, since it is still within the first 15 days of Chinese New Year, the custom of serving "Yusheng - 鱼生" as the starter of the meal still continued. The Yusheng here is quiet different from the usual one that we have, especially on their ingredients. From the name " Salmon Raw Fish Yu Sheng With Snow Pear - 水晶雪梨发财鱼生", you will be wondering how is the "Snow Pear - 雪梨" being incorporate into the Yusheng. To our surprised, they actually replace the white radish with shredded snow pear, and also some colourful "tadpole" eggs like sago which you don't really find in other Yusheng outside. So we give this dish about 8/10 for it's taste, colour and self-made crispy bites too... 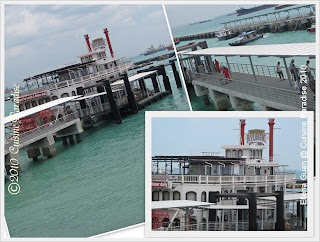 While waiting for other dishes to be served, Rey and I went out to the balcony area where we can have a better view of the harbour. "Marina South Pier - 滨海南码头" is located in Marina South(used to be the place where people will gather around for steamboat, kite flying and etc during weekends) which is used as a terminal for tourists and day trippers who are boarding small boats and ferries heading for the Southern Islands. This pier was built to replace Clifford Pier since April 2006 to provide regular ferries to Kusu Island and Saint John's Island operate daily. 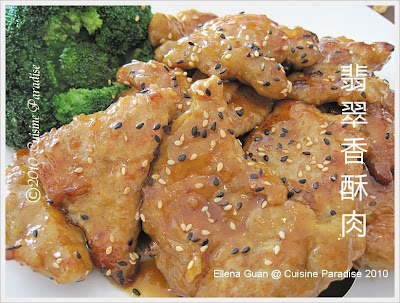 Em... This dish look sort of like "Pai Gu Wang - 排骨王" at first glance, but accordingly to my cousin, this is one of their famous signature dish known as " Pan Fried Pork Chop In Sweet & Sour Sauce - 翡翠香酥肉". The pork chop is very tender, juicy and fill with the aroma of the sauce. Most important, it does not taste/smell of those porky taste. This sure goes well with a bowl of steam rice......... 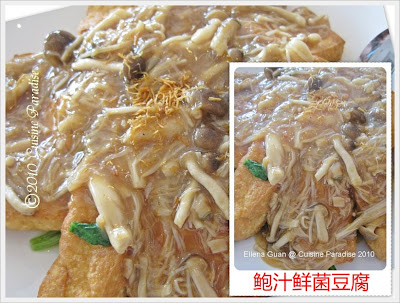 I love this " Braised Assorted Mushroom with Beancurd in Abalone Sauce - 鲍汁鲜菌豆腐". The outer layer of the doufu is crispy while the inner layer is soft and moist, accompany with the assorted mushroom and abalone sauce on top really enhance the flavour of the doufu. Other than these, this dish also served with some blanch "Spinach - 菠菜" on the side and the mushroom sauce goes really well with spinach. 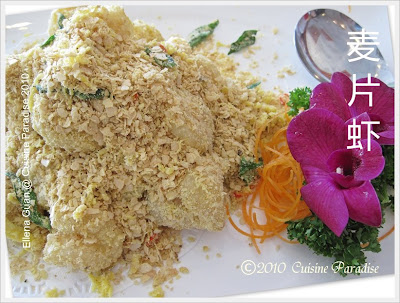 Guess what, this is one of our all time favourite, "Deep Fried Prawns with Cereal - 麦片虾". Cousin was indeed very thoughtful that he actually give instruction to the chef to remove the shell of the prawns before stirring it through the cereal mixture. The cereal for this dish is nicely fried with that great aroma and the colour is still remains as light golden instead of over cooked/burnt. Overall, everyone of us give praise to this dish. 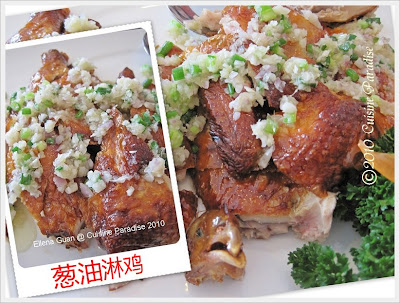 Em... this is the 4th Roast Chicken that I had for Chinese New Year dish. I still wondering why they must used roasted chicken instead of steam...........guess maybe is due to it's golden colour after deep-fried. I find this is rather a special dish that drizzle some combination of "Garlic, Spring Onion and White Onion" mixture on top of the roast chicken. But half of us still think that this combination should be placed on steam chicken instead of roast chicken so as to let the chicken absorb the fragrant and taste of the mixture. 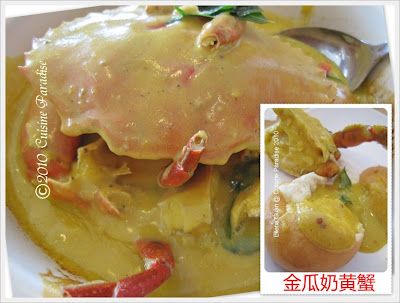 Here comes the "Stars" of today's menu. We have two Crab dishes that is cooked in different method. First to come is their signature crab dish known as " Pumpkin Custard Crab - 金瓜奶黄蟹". I have read a few good review from magazine about this dish and today finally I got a chance to look and taste it. The pumpkin custard taste great with the deep-fried "Man Tou - 馒头", the sauce does not over powder by the pumpkin taste and they really combined well with the crab. 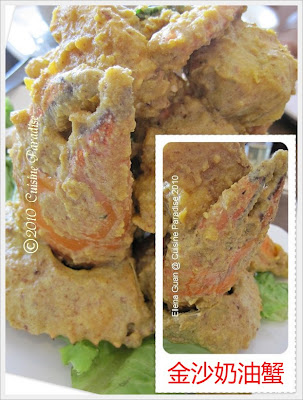 Next they served the "Fried Crab With Custard & Salted Yolk - 金沙奶油蟹" which is arranged in a very unique way that most of us have not seen before. They actually stacked up the pieces one by one on top of the crab shell to form a tall tower. This can be consider as one of the best Salted Egg Crab that I had tried before, the combination of the sauce is great, not too salty, not too sweet. Everything is just well combined and the crab pieces is nicely fried and overall we loved these two crab dishes. We do recommend you to give these a try if you do love crab too.... 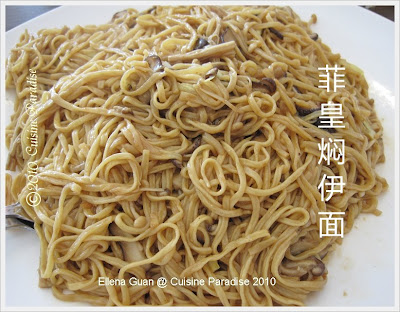 Lastly, cousin also ordered one of my brother's favourite dish which is this "Stewed Ee-Fu Noodle with Yellow Chives - 菲皇焖伊面". Accordingly to the dish, it supposed to be stewed with Yellow Chives, but when the dish is served we find there is a lot of assorted mushroom in it instead of yellow chives. I guess maybe they are out of stock for chives so they replaced it with mushroom instead....... The texture of the noodle is ok, but the taste of the sauce is not really good, still can have some room for improvement on this dish. 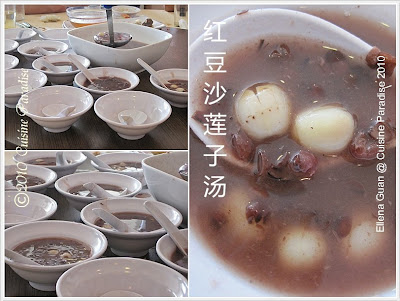 Finally, it's dessert time...... I have being waiting for dessert as usual. But I was kind of disappointed when they didn't served the "Chilled Mango Cream with Pomelo - 杨枝甘露" and replaced it with this "Red Bean Cream with Lotus Seeds - 莲子红豆沙". This red bean cream was kind of diluted rather than the creamy texture, and guess the serving waiter is either kind of new or he is simply not doing his job well as some of the bowl is only half filled and with too many lotus seeds while some bowls are empty with just the red bean soup instead.

Overall this place is still great for it's dish at a reasonable price if you wish to find some seaside view for dinning. Or if you are hanging around at "Marina Barrage - 滨海堤坝" area, perhaps you would also like to drop by for lunch/dinner which is less than 5 minutes drive from the Barrage. To get to Marina South Pier, you can either drive or travel by MRT to Marina Bay Station, and take bus service number 402 outside the station.