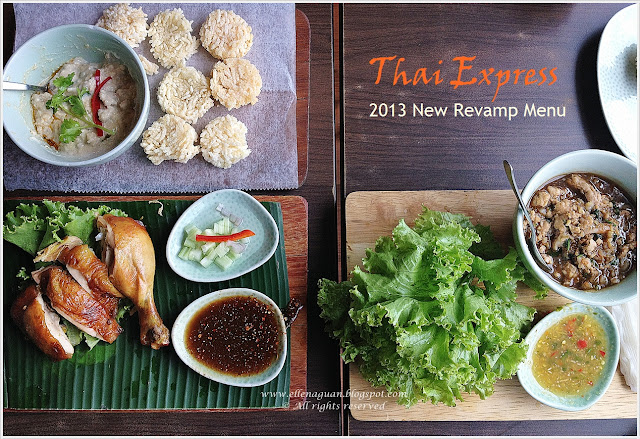 This year 2013, ThaiExpress has launching a new menu with over 130 items. The revamp menu aims to freshen up local diners' palate with new items inspired by authentic Thai dishes from different parts of Thailand. The new menu also highlights popular Thailand's street snacks, salad, noodles and etc which patrons will be able to satisfy their Thai cravings at a whole new level of dining while ThaiExpress reveals the hidden Thai delicacies to Singapore.

This new revamp menu is available at all 24 ThaiExpress outlets located islandwide.

For a start, I have a cup of this Naam Ma Toom which is a Traditional Thai Herbal Drink on their new revamp menu. This herbal drink is brew using Bael Fruit (巴埃尔) and it is considered as a health drink in Thailand. For your information this drink is supposed to be good for cleansing the stomach and helping digestion too. I love the refreshing and light after taste fragrance which resemble rose / fruity flavour.


I must have missed this popular Bangkok street food during my recent visit two months back. This Khoa Tang Naa Tang is served by placing some Creamy Chicken and Shrimp Sauce on top of the crispy Thai Rice Cracker.


Although I have not being to Pattaya before, but with the new revamp menu at ThaiExpress I am able to try their Gai Op Pattaya which is a Thai-style Roasted Chicken.  The roasted chicken drumstick is tender and juicy with a light lemongrass and herbs aroma which goes well with accompany soya dipping sauce and cucumber salad.

{MUST TRY} Kway Teow Lui Suan also known as Thai-style DIY Minced Chicken and Dry Kway Teow Salad is a great appetizer to start with. Although it might be a little messy when handling this salad dish (as you need to wrap up the minced meat filling using lettuce and rice noodle sheets) but with a few hands-on I am sure you would be able to do a great job on wrapping it too. Overall we love the taste of the flavoursome minced meat mixture which pairs well with the crunchy lettuce and soft rice sheet. Quite similar to the Vietnamese spring roll concept but with different fillings.


{MUST TRY} Kway Teow Sukhothai is one of the popular noodle dish from Sukhothai which is a province of Thailand. At first glance, you might have a perception like us that this bowl of noodle would be "extremely" spicy due to it's fiery red colour. But surprisingly it has an addictive taste that cross between sweet, spicy and sour which quite similar to our local Mee Siam.

For kids or someone who don't take spicy food, ThaiExpress's new revamp menu has introduce a new dish known as Khao Tom Pla which is a Thai-style Fish Porridge.  This fragrance porridge comes in generous portion that toppings with some fried garlic and Chinese coriander to enhance the taste. With that, there is also a special dipping sauce for the fish that taste like mixture of light soy sauce, fermented soybeans, grated ginger and etc.

Although this might not be the same fish porridge like those sold in the hawker center or foodcourt which use Mackerel or Grouper fish but for a chance, this is indeed something that taste good too.

To complete the meal, we tried two of their new desserts which are Ta Kor and Mun Cheam. For those with sweet-tooth, Ta Kor which is a famous Thai fragrant pandan jelly with coconut custard and corn kernels would be a great choice for dessert.

For me if to choose between the two desserts mentioned, I would go for Mun Cheam which is steamed sweet potato with coconut milk. Surprisingly this steamed sweet potato comes with a crunchy outer skin and firm texture when compared to the usual steamed potato which is soft. On top of that, Khao Niao Mamuang (sweet glutinous rice with fresh mango and coconut milk) and Thai Chendol are my favourite dessert from ThaiExpress too.

Lastly I would like to thank ThaiExpress and Chantel for hosting us on the tasting.