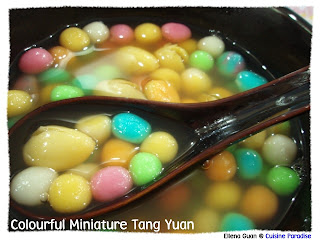 Wow! When you look at these I am sure you will be wondering what is these? Can these be eaten? This is actually our traditional no filling Tang Yuan which came in White and Pink in colour. But then my dear friend Tracy was telling that to make it more colourful for kids. So I also decided to make some colourful dough and do it with my dear reyon. 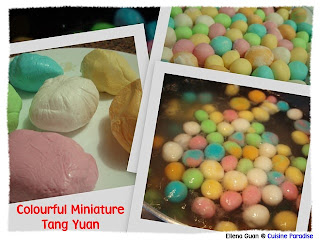 The dough is pretty easy to prepare as you only need to add colour water to the glutinous rice flour and stir well to become a dough. I made very little tang yuan which sort of like the size of a marble or slightly bigger so that you will feel like eating more of the wonderful colours. 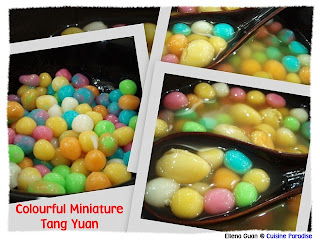 I also pre-boiled a pot of Red Date Longan Water with extra Ginkgo Nuts to go with the boiled tang yuan. These are really an easy to made dessert with kids and I am sure they will enjoy both making and eating it.....

Methods:
1. Place the flour and potato starch in a mixing bowl, slowly add in colouring water.
2. Stir with a chopstick and knead into a smooth dough.
3. Pinch a bit of the dough and roll it into round shape according to the size that you prefer.

Note:
a) You just repeat with the above steps with different colour or favour water to make the colour dough.

First of all I would like to thank one of my good blogger friend Tracy for contributing two of her new creations to this blog. She is someone who loves all kinds of dessert and she is very innovative in creating her very own dessert using whatever ingredients she can find in her kitchen pantry. Like from those Assorted Agar Agar you can see she actually takes the time to boil the Dried Longan with Peng Da Hai to make the Ching Teng Favour. I can said, when comes to dessert Tracy really gives me a lot of wonderful ideas. Thank Pal for all the ideas and support. 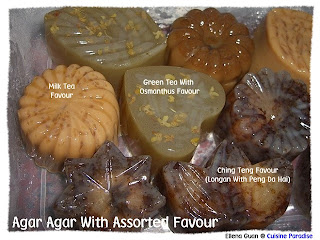 The word agar comes from the Malay word agar-agar (meaning jelly). Agar is usually sold as packaged strips of washed and dried seaweed, or in powdered form. Raw agar is white and semi-translucent. For making jelly, it is boiled in water at until the solids dissolve, after which sweeteners, flavoring, coloring, and pieces of fruit may be added. The agar-agar may then be poured into molds or incorporated into other desserts, such as a jelly layer on a cake. 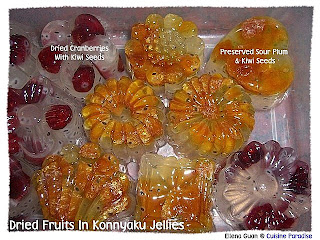 Japanese konnyaku jelly is made by mixing konnyaku flour with water and limewater. Without additives for color, konnyaku is pale white. It is then boiled and cooled to solidify. Konnyaku has almost no calories but is very high in fiber. Thus, it is often used as a diet food.

This Dried Fruits Konnyaku Jelly is something that is interesting from her. Because usually we add can mixed fruits or fresh fruit in it, I had never eaten this type of jellies with dried fruits added. So I am actually very keen on trying out the Sour Plum Favour type. So I am going to look for a suitable Sour Plum from Umeya to test this out. According to her, you just need to cut the dried fruits into smaller pieces then put into the jelly mould and cook the konnyaku according to packet instruction and pour into the mould set it in the fridge when cool over night or for a few hours to let the favour developed. 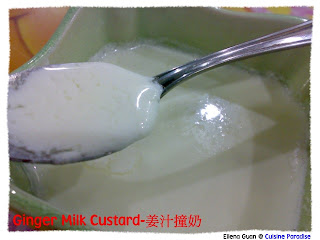 Those who like to have a bowl of dessert after meal might had already known this simple homemade dessert. It's a very famous HK sytle dessert which is pretty easy to make. You only require simple ingredients like Fresh Milk, Ginger Juice & Sugar. 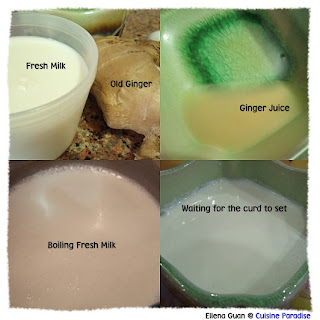 Since today I had an early dinner, I decided to whip up a one person share portion for this dessert. You can make it into small tea cup size or small soup bowl that suits your own liking.

Methods:
1. Bring the milk to the boil, reduce to low heat, add in sugar and continue to cook for another 2 minutes.
2. Set aside for a while(about 2-3 minutes).
3. Pour the milk between 2 cups for about 10 times.
4. Put ginger juice into bowl or tea cups then pour in the milk from about 8" height over the bowl.
5. Do not jiggle the content until it set(about 5 to 10 minutes, depend on it's size).

Notes:
a) Bring the milk to the boil first before reducing to low heat. This makes it more thickened and easier to set. 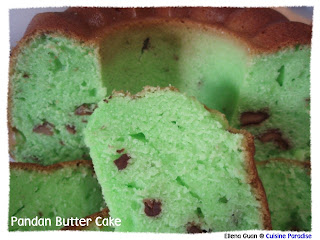 Saw this interesting cake from one of my blogger's friend Angie's "My Kitchen:My Laboratory" blog. I was captured by that lovely jade green of her Pandan Butter Cake. 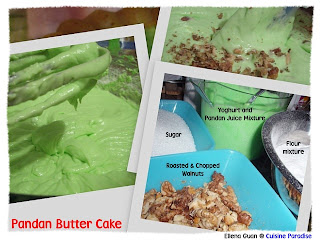 This cake is so different from our usual Asian Pandan Cake which require Coconut Milk/Cream as one of the Main Ingredients. In her recipe, she replace the coconut milk with plain unsweetened yogurts which make it much healthier. So I suggest for those who likes pandan cake but afraid of the coconut milk content, you should give this recipe a try. 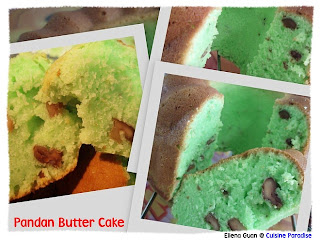 It's really something different from an afternoon tea-break. The colour of my cake is slightly darker than her because it add in a bit more pandan essence colouring to make it more greener. :)