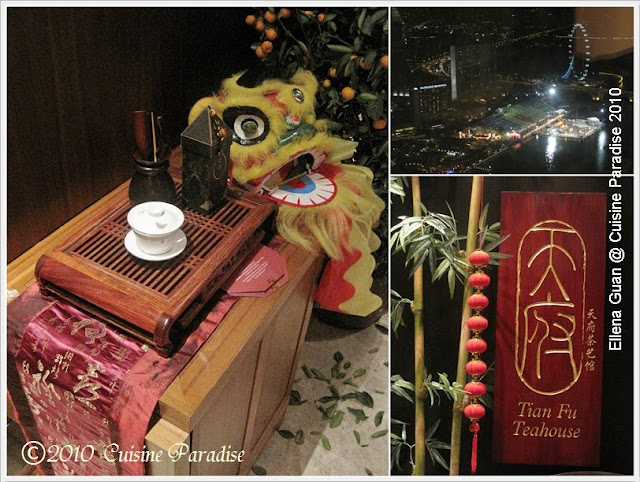 This year is my brother's turn to arrange the venue and crack his head on which menu to select for our 10 persons Chinese New Reunion Dinner gathering. So without hesitation, he selected one of his favourite hangout @ " Tian Fu Teahouse - 天府茶艺馆" which is one of the tea house concept by "Si Chuan Dou Hua Restaurant - 四川豆花饭庄" which is located at the UOB Plaza 1, level #60-01. 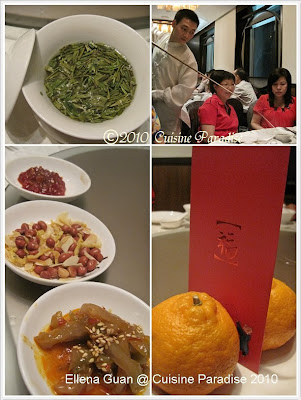 For reunion dinner, this restaurant offer similar timing like most others do which you can select either the earlier timing which will ends around 8pm or later slot which start serving at around 8.30pm. Upon seated, we are being served with a cup of traditional "Long Jing Tea - 龙井茶" that is prepared with exact measurement of tea leaves and served in an amazing way by the Tea Master. Other than their special tea, you must also try their very own appetiser, "Si Chuan Pickles - 四川榨酱菜 " which is crunch and tasty. 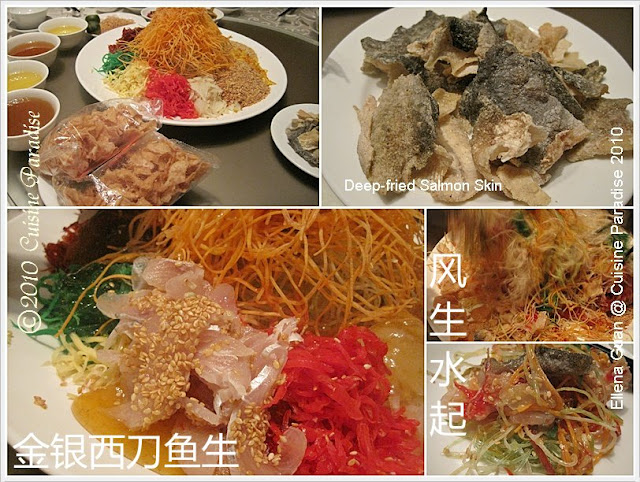 Our today's menu will be the "Prosperity Set - 大展鸿图" that serves with 7 dishes and 2 desserts. After about 10 minutes of waiting, the 1st dish of the night, "Ikan Parang Yu Sheng with Golden Fish Crisps" arrived. According to the waitress, this is known also as "风生水起" where she will help to add/pour in the ingredients one at time with auspicious greetings used for Chinese New Year. When she has finished the process, it is our turn to use the chopsticks to stir the ingredients together and lift it up as high as possible to represent good luck, prosperity, promotion and etc.

For your information, there is a plate of "Deep-fried Salmon Skin" which is prepared by the restaurant for this Yusheng dish. 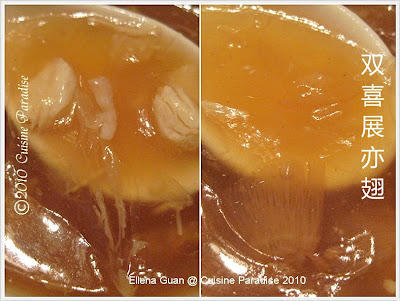 Another 10 minutes or so our "Braised Shark's Fin Soup with Crabmeat - 双喜展亦翅" came. Most of us was quite disappointed with this dish because we find it too starchy which we think it look and tasty like those sticky dessert rather than shark's fin soup. Moreover, I don't even seen any crabmeat which mentioned is most of the bowls, but rather we found a lot of chicken cubes in it. 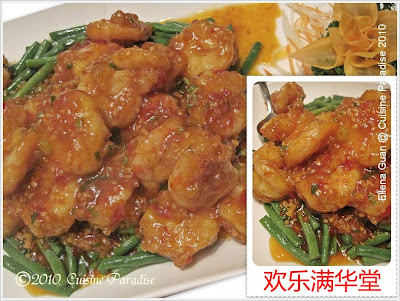 While waiting for the chef to sliced off the crispy outer skin of the "Bei Jing Roasted Duck - 北京脆皮烤鸭" and the preparation of the pancake parcel, our "Stir-Fried Prawns with French Beans in Garlic & Chilli - 欢乐满华堂" was served. The prawn balls are very fresh and crunch and it goes well with the chilli sauce which we find it similar to chilli crab sauce. 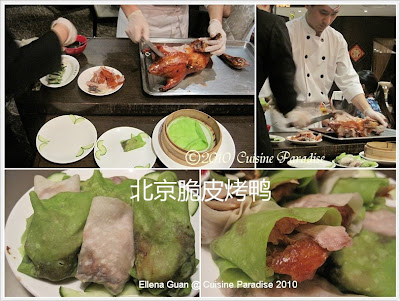 But I was rather attracted to the chef and waitress who is busying slicing the roasted duck and rolling the pancake parcel. My brother loves their Bei Jing Roasted Duck and he ordered this for an extra bonus dish for us to try. We were all amazed by the chef skill in slicing the duck which is still piping hot with smoke filling in the air. The pancake still is kept warm in a bamboo steamer which two tone of colour which is jade green and white. The waitress quickly spread a layer of sweet bean sauce(hoisin sauce) then top with generous amount of crispy duck then wrapped it into a pocket parcel. 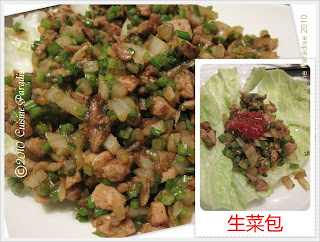 The remaining parts of the duck will be made into a second dish called "San Choi Bao - 生菜包" where they cut the duck meat into small cubes and stir-fry it with spices, spring onion, white onion and etc. This dish is served together with a plate of "Iceberg Lettuce - 生菜" leaves that are used to wrap the duck meat mixture and eat it as a finger food. 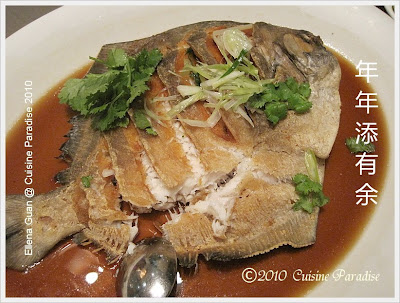 Next dish on the list is "Pan-fried Pomfret in Soya Sauce - 年年添有余". This can be consider as a normal classic homecook fish dish that can be found is most family. I remember, my late dad used to cook this dish for us at least once a week. I love the outer crispy texture of the fish that goes well with taste of soya sauce base. 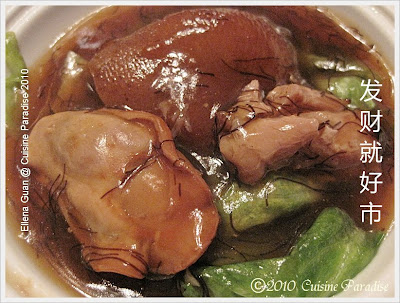 "Braised Pork Knuckles with Dried Oyster & Sea Moss - 发财就好市" is the 5 dish on the menu list. According to the myth of most Chinese, they believed that dried oyster sounded like "好事 - good deeds" whereas moss sounded like "发财 - get rich" in Mandarin so when these two ingredients put together with pork kunckles it became another auspicious name such as "横财就手". I love this dish, because I love Pork Knuckles that is braised in such method where the meat and fat are so soft and smooth like jelly texture. 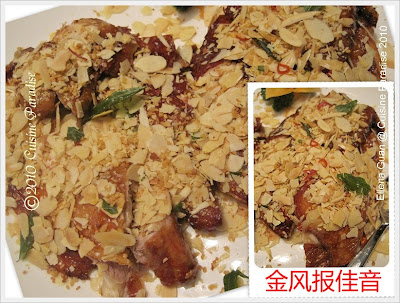 Eat out during holiday season like Christmas or Chinese New Year can be a great problem because due to large crowds they might be a longer waiting time interval before each dish is being served. It's already 10.30pm and we still have another 2 more dishes and 2 dessert to go. And because of the late dinner and waiting time, by the time they served this special and attractive "Crispy Roast Chicken - 金风报佳音" we were almost too full and tired to try. Most of us love the toasted almond flakes topping which bring extra fragrance to this dish. 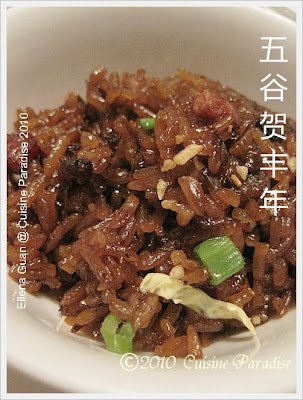 Now we reach the last dish which is "Glutinous Rice with Waxed Meat wrapped in Lotus Leaf - 五谷贺丰年". At first, mum suggested that perhaps we shall ask the waitress to help us pack-up this dish and served the desserts instead because everyone of us are too full to eat any rice dish. But after seeing the actual portion, uncle James feel that it is alright for us to take a small portion after divided into 10 serving. Although we are all very full, but we must admit that this dish is indeed very nice, fragrance and most of all not greasy. 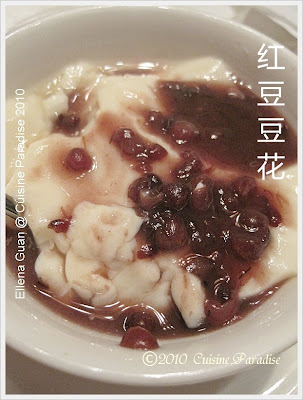 Finally! Here comes our desserts of the night. I have being waiting for these two dessert before even the main course is up. First to come is their "Homemade Beancurd with Red Bean - 红豆豆花". The sweet and aroma of the cooked red beans goes very well with their homemade silky beancurd. Even though I am very full after eating the above dishes, but I don't mind having a second share of the extra bowl of beancurd :p 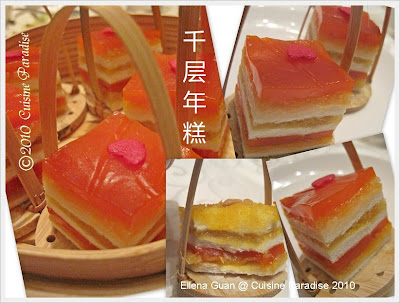 My excitement of tonight focus on this special "Steamed Layer New Year Cake with Egg Custard - 千层煎年糕 " which I am able to it from the restaurant "Imperial High Tea - 宫廷下午茶 " dim sum which is being feature on TV entertainment programme, "NEW CITY BEAT - 城人新杂志". These new year cakes are being served on a cute little bamboo hanger in the bamboo steamer. Each cake comes in about 8 layers in a mixture of Nian Gao, Egg Custard and the white portion seems like bread/cake/or something like rice flour texture...... Overall it's a very delighted sweet dessert for both Chinese New Year and Valentine's Day.

Overall everyone of us are very satisfied with today's menu and each of us have our own preference on each dishes...... And I am looking forward to try their limited period promotion on the "Imperial High Tea" which is till 28 February 2010. If you are interested in the unique Imperial Dim Sum that serves with good grade of tea by the tea master, perhaps you can consider this offer at either UOB Plaza 1 or Park Royal Hotel(Beach Road).