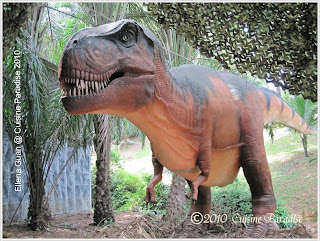 Wow.. I am sure upon looking at this photo you will be feeling just as shock and excited like us. Imagine if you are able to walk into the long lost world of ancient Dinosaurs to see and understand more details on their life-style isn't that be great and wonderful....... 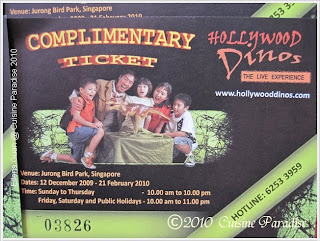 Although this Hollywood Dinos Events started since last year mid December but unfortunately we are not aware of it until Mum got these complimentary tickets from one of my uncle during Chinese New Year. According to the ticket, the last day of this event will be on this coming Sunday, 21 February 2010 from 10am - 10pm. 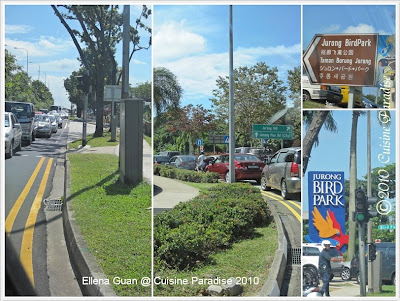 Since there is a long holiday during Chinese New Year period, we decided to use these ticket on the 3rd Day of New Year. In order to go for New Year visit, we decided to set off at our destination early in the morning and hope to reach by 10.30am to as to avoid the noon crowd or hot weather. But....... these photos proofed that we were wrong, when we reached the traffic junction along "Jalan Ahmad Ibrahim" towards the "Jurong Bird Park" entrance. We were shock to see the Super long queue of cars along the road from the traffic junction all the way up to the car park entrance of the Bird Park. I think we waited for at least 30 - 40 minutes before entering the car park......... 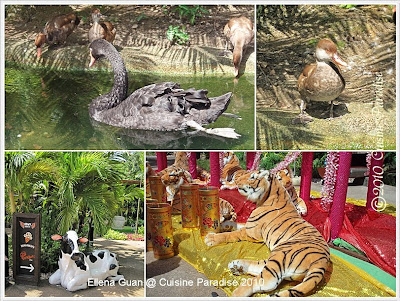 Rey was very very excited even though we were stuck in the car during the waiting time. He was very eager to take a lot photo shots during on the Bird Park signboards, traffic jam, tress and etc. This was because, last week during his school "Field Trip" to Jurong Bird Park he was very upset as he didn't managed to take many photos due to camera battery die off(partly because I forgot to charge the battery for him and secondly he has being taking too many photos of his classmate in the bus during the journey).

But today he managed to take all these photos before the entrance of the Bird Park which he wanted to show me badly during his field trip. (p/s: this set of photo above is taken by him.... :p) 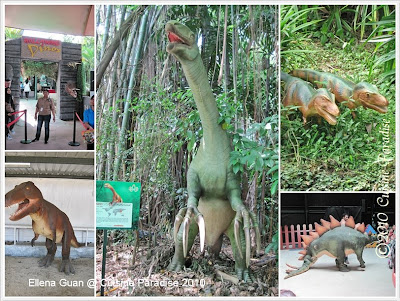 After spending some photo taking time at the entrance, finally we are in the world that is full of "Dinosaur's". At the entrance of we greeted by a "Therizinosaurus" which look pretty real and scary. Most of the kids in front of us was very excited and kept touching it's crawls and body but Rey on the other hand was kind of held back on the photo taking/touching.

In the 1st cave, there is this walking "Dinosaurs" that will dance with the background music and most of the kids/adult were enjoying it. This dancing dino will suddenly attack the audience in the first row without giving any warning sign and you can heard scream and laughter during the 10 minutes show. 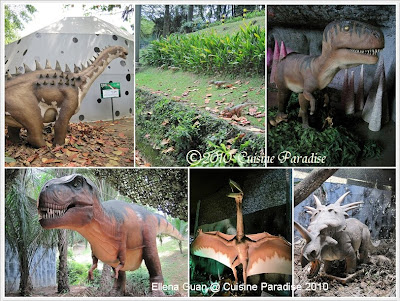 Next we move on to the "Vine Lizard - Ampelosaurus" which is about 2 meter tall or above. According to the information given, this is found in France's Paleontogoist in 1989. Most of the little kids love this "soft looking" dino which seems to be more friendly for the kids.

Round the corner we were at the entrance of the 2nd cave, the 1st Huge Dino that greeted the visitor is this "Tyrannosaurus" which means tyrant lizard that appear during the late Cretaceous Period.

Passing through the second cave, it will lead you into the 3rd cave which is pretty dark and with sandy floor. There is also a rocking wooden bridge which you can walk over it and experience yourself in forest or so with dinosaurs chasing after you. In this cave, you can find "Suchomimus" which is a large spinosaurid-type dinosaur from the middle Cretaceous period. Rey was kind of turn off by the gaint flying lizard which is known as "Quetzalcoatlus" where their first fossils were found in Texas. 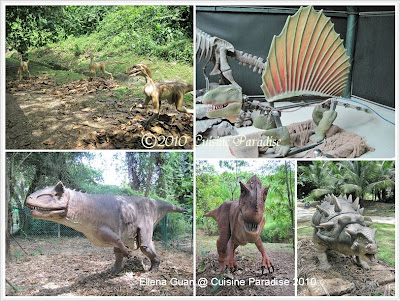 There are all kinds of Dinosaurs which is either display in door(in the dark caves with special effect) or outdoor which can look real from far. Despite which is your selection, I am sure this is a very good and interesting Educational Tour to bring your kids along during this coming weekend if you are interested before the ending of this event on Sunday, 21 February 2010. 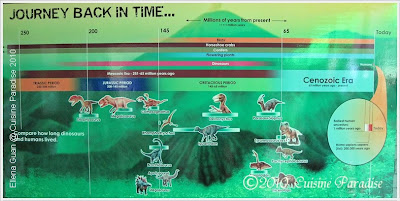 There is also a time map at the resting tank after the 3rd caves where the kids can read and refresh their memories on those Dinosaurs that they have saw along the journey. 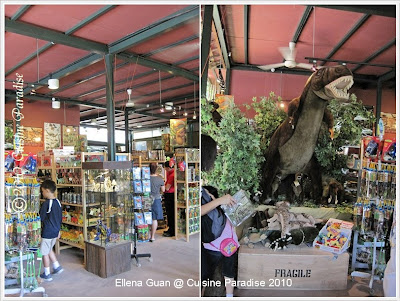 The whole visiting time takes about an hour to an hour and half depending on the kids and the photo session during the peak hours. All visitors are also encourage to take part of the lucky drawer where you need to answer 3 simple questions where you can find the answers along your dino hunting journey. At the end of the tour, you will find a little souvenir shop which is selling all kinds of Dinosaurs products, from soft toy, bags, caps and etc..... But the price is......errrrr....... to expensive.. imagine a medium size(about 2 feet or more) dino soft toy cost around S$120.00........

Overall, this is still a very worth going trip for kids to know more about Dinosaurs as well as seeing/touching them in real life. For more details about this event, click HERE.