Chef Daniel's Kitchen, a newly setup rooftop restaurant located at the Sky Garden (level 7) of lluma at Bugis offers a very valuable Set Lunch @ S$10.50 Nett which includes soup of the day, main course, dessert of the day and a drink.

Recently we just had a small foodie gathering at this restaurant and these are some of the Set Lunch that we have tried. We decided to order different varities so that we each can get a chance to try out more of their dishes. With Rey around, I decided to pick this "Prawn And Crab Meat Burger" as my main course because usually most of the kids love fast food such as burger and fries. We are glad that this seafood burger taste great with its yummy seafood patty that is moist and juicy. One add-on point is the fries that comes along with the burger is still hot and crispy while served. 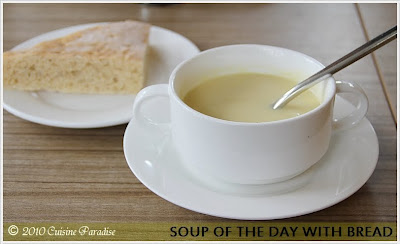 The Soup of the Day was "Cream of Corn Soup", which was decent enough to go with the warm freshly baked herbal bread that was served together with the soup. But flavour of the corn soup was pretty mild so don’t expect those kind of really thick and creamy soup that is full of corn kernels in it. Kai's choice was this "Unagi Cooked in Katsu Sauce". For me I guess I won't try a Japanese dish in a fusion restaurant unless it is highly recommended. But this bowl of unagi don should be able to fill up your tummy without much complains. Lobsterpaints like to give their "Tonkatsu Don" a try which she finds that perhaps the authentic Japanese restaurant might served a better taste of this as the pork cutlet was rather tough and dry. Alvin choice's was this "Grilled Chicken" which we think the portion was rather small for those with huge appetites. Misstamchiak left with a choice of Spaghetti that served with Pan-fried Dory fillet. This might be a great choice for those who love tomato sauce base spaghetti. The pan-fried dory fillet taste great and is suitable for those who wants a combination of fish and pasta together. 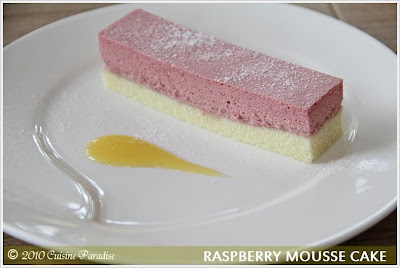 The Dessert of the Day was a joke that made us all have a good laugh. Before serving, I check with the waitress on the dessert and was told that it would be mango cake. But later when the dessert came, it is a two-layer cake with "pink & light yellow" colour so we are wondering where is the "Mango cake". The more we taste the dessert the more it taste and look like raspberry. So Lobsterpaints, Alvin and I decided to verify with another waitress again and finally we got the correct name:- "Raspberry Mousse Cake". This raspberry mousse cake is served with some tangerine sauce and the texture is kind of soft and moist with slight sour taste due to the berries. But overall it might be considered as a light and refreshing dessert that is not too heavily infused with cheese or cream. 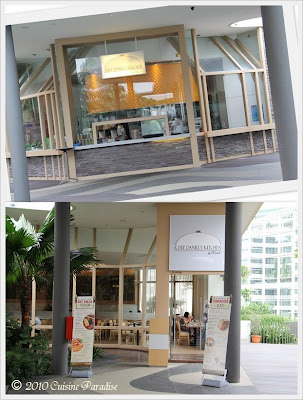 Overall Chef Daniel's kitchen presents contemporary east-meets-west blend of cuisines that satisfy your taste buds as well as sight. And another good point is, this restaurant is located away from the crowds that make it a quite and peaceful place for meal with contrast between serenity of the nature and busy city area.

In the month of August, in order to celebrate the Singapore's 45th Birthday, Chef Daniel's Kitchen is also having a 15% for their National Day Special Menu.