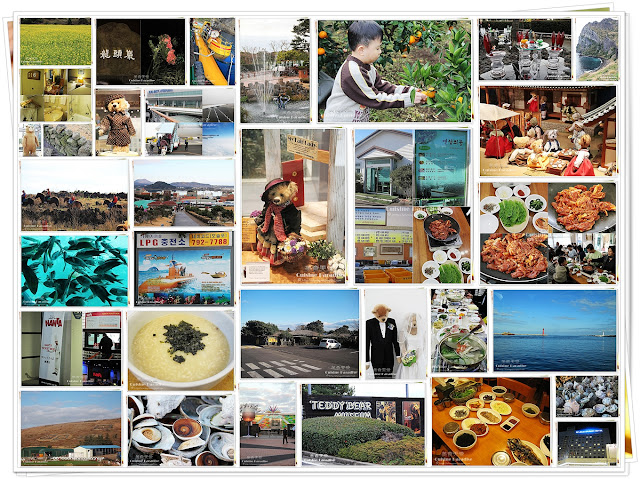 Jeju Island (濟州島) formerly known as Cheju Island is an island off the southern coast of South Korea. This island is also known as the "Island of the Gods" which is a popular vacation spot for Koreans and many Japanese and Jeju is also one of the top honeymoon destinations for Korean newlyweds. Even thought we are there during winter but with its' typical mild coastal climate the minimum temperatures in winter is also above 0 degree due to the warm currents. 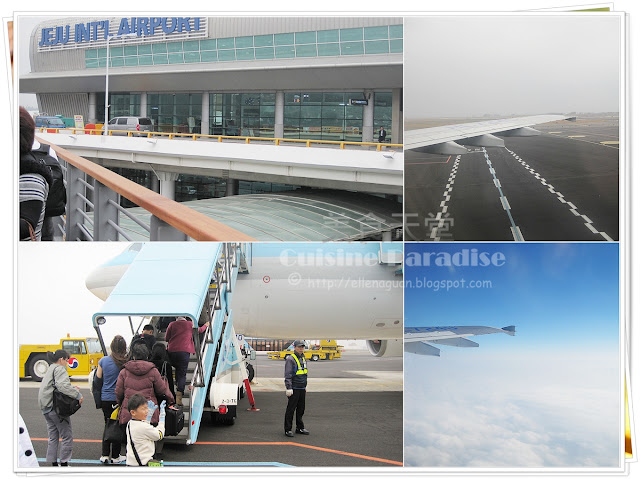 It takes about an hour flight to reach Jeju International Airport from Gimpo Domestic Airport in Seoul. 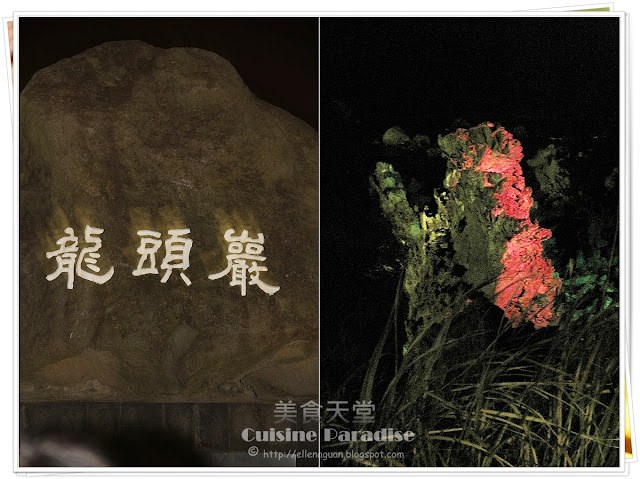 During Winter time the day will be shorter as the sun set off around 5.30pm so by the time we reached Jeju it already very dark in the evening. Before our dinner we went to one of the famous attraction in Jeju known as "Yongduam Rock (Dragon Head Rock)".

Yongduam is a volcanic rock that was created from an eruption about two million years ago. It is 10m high and 30m long and it gets it name because of the legend that a dragon (“yong”) living in his dragon palace tried to ascend to the heavens and got stuck. 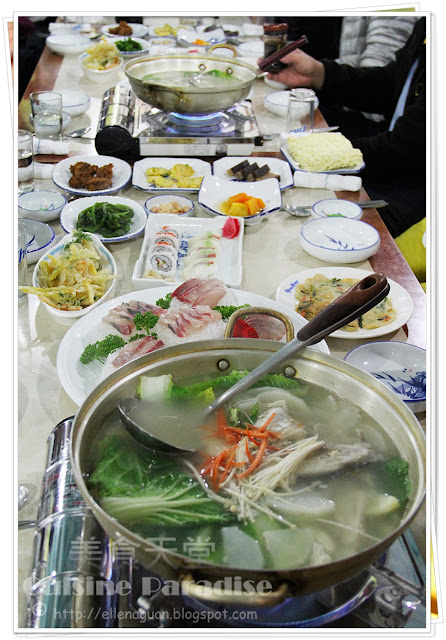 According to our tour guide Jeju is famous for it's freshness of seafood so our dinner for that day was mini seafood feast which is fresh sashimi plus seafood steamboat and lots of side dishes. 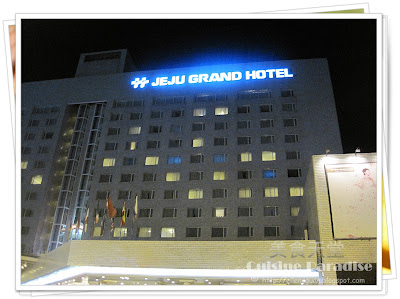 Our hotel in Jeju is consider a 5 stars hotel over there where there are SPA, restaurants and Casino. The cosy guestrooms are a mix of Western and traditional Korean styles, and have a smoothing, relaxing atmosphere. The Grand Hotel Jeju is located about 10 minutes drive from Jeju International Airport. 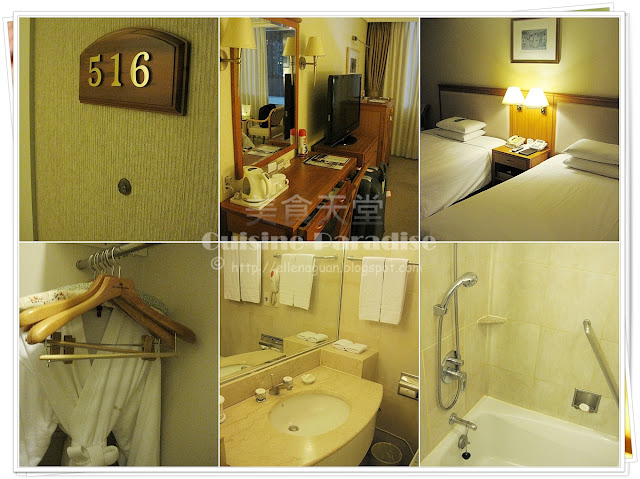 Room view of our hotel. Finally after a long day travelling around with flight transfer we are now settled for a good rest before another day of excitement. 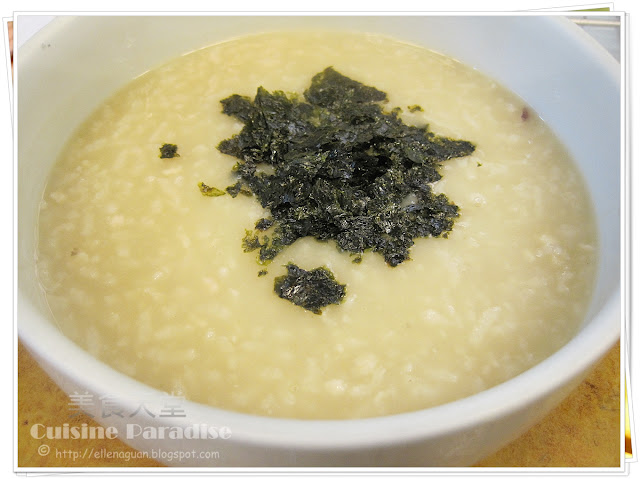 Our breakfast at one of the restaurant at Jeju. Abalone porridge with lots of side dishes, ham and egg roll. 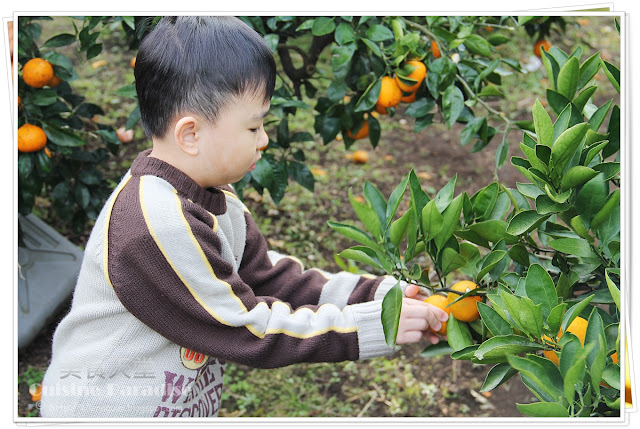 After breakfast we proceed to our 1st destination of the day which is one of the Tangerine Farm at Jeju where we get the chance to plug and eat fresh from the tree. Beside that we also get to buy some Jeju famous chocolate that made from real fruit. 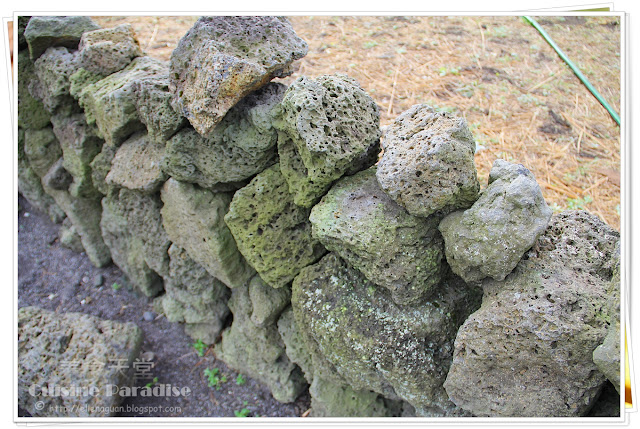 Colourful Volcano Rocks stacking up along the side of the farm to act as fence. 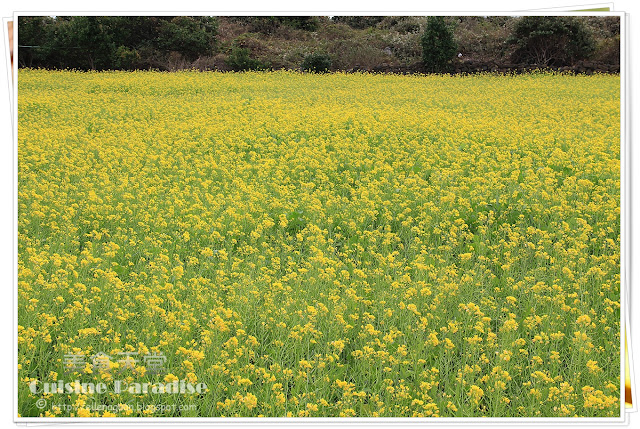 Rape Seeds (Canola) Flower Farm at Jeju gives us an warm smile during winter due to it's vibrant colour. These rape seeds can be used to make into canola oil which contains both omega-6 and omega-3 fatty acids in a ratio of 2:1. 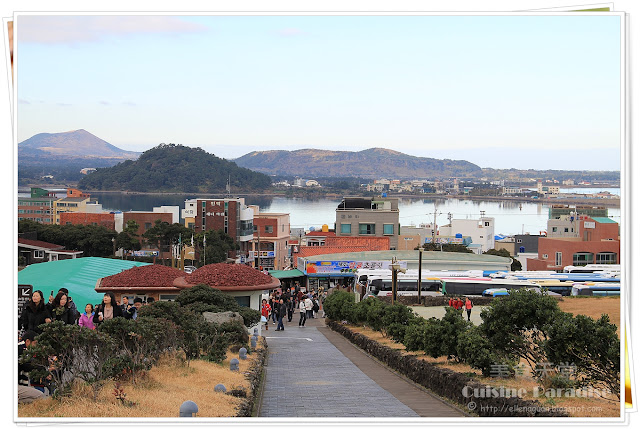 Before the Submarine tour we stopped by at the Seongsan Sunrise Peak which was risen from under the sea in a volcanic eruption during 100,000 year ago. 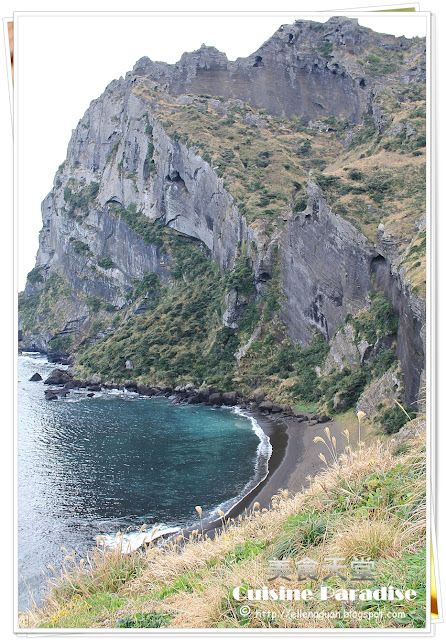 The crater is about 600m in diameter and 90m high. With the 99 sharp rocks surrounding the crater, it looks like a gigantic crown. While the southeast and north sides are cliffs, the northwest side is a verdant grassy hill that is connected to the Seongsan Village. 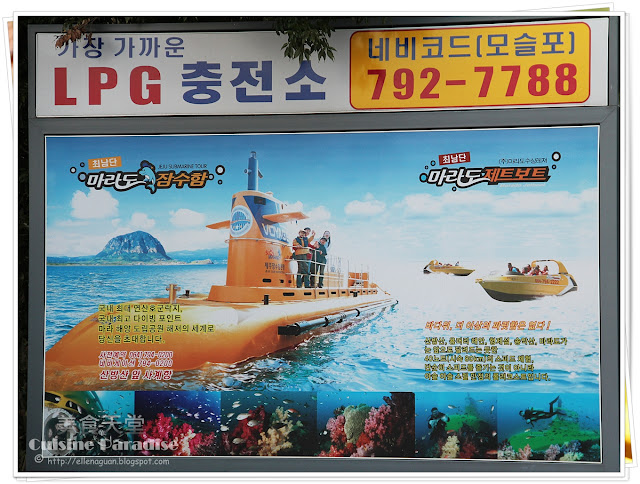 After a short stay at Seongsan, we are all eager to embark the fascinating submarine tour which we could get a spectacular view of ocean floor. 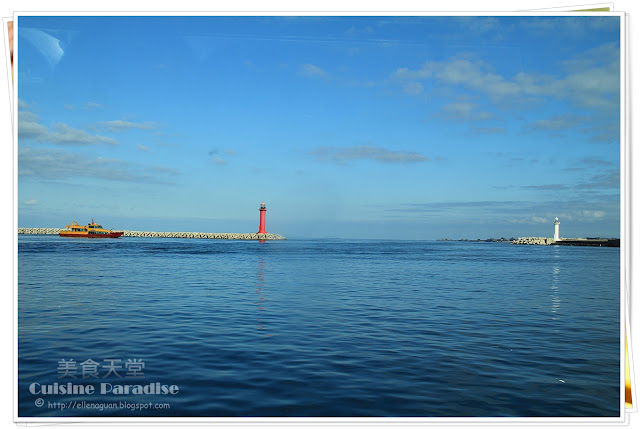 Scenic view of the nearby lighthouse during our boat ride to the submarine destination. 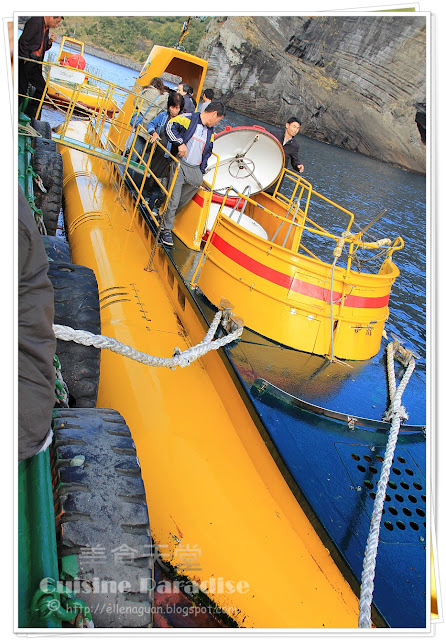 Getting ready where everyone are queuing up to take turn to go into the submarine. 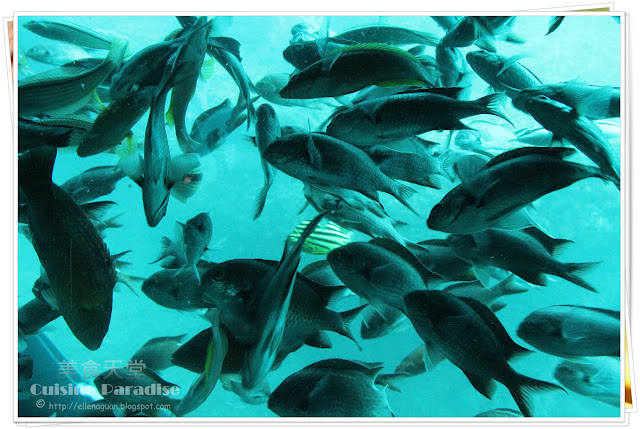 This photo is taken in the submarine window view at 30m undersea where all the lovely fishes lived. 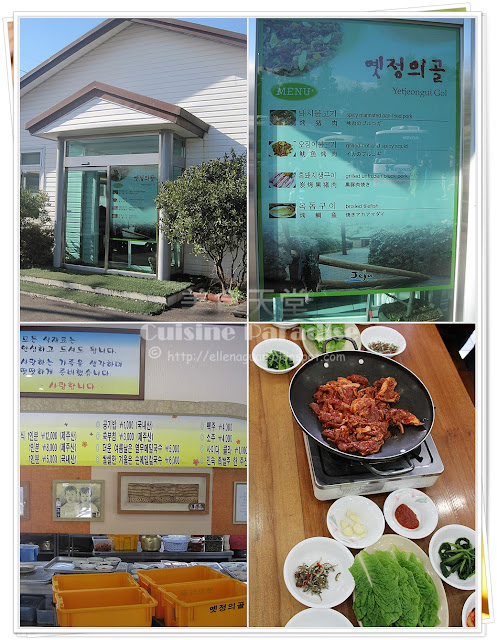 Lunch was served at a nearby cottage known as Yetjeongui Gol where we gets to eat the local Grilled Black Pork(炭烤黑猪肉). 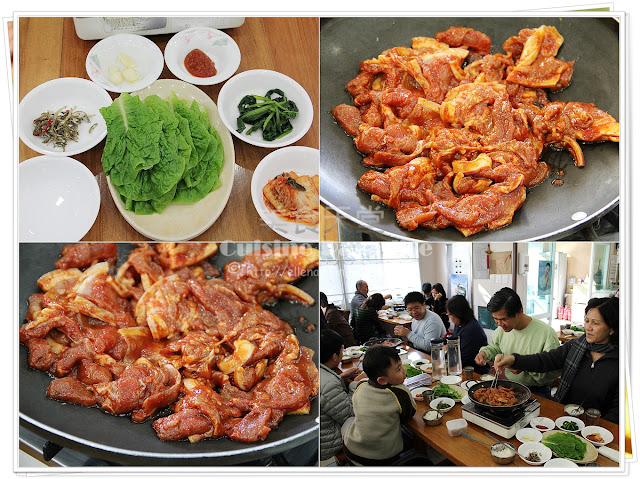 The marinated sliced pork are placed in a pan where we gets to pan-fried it our own and eat with either steam white rice or wrapped with fresh lettuce together with kimchi or sides. 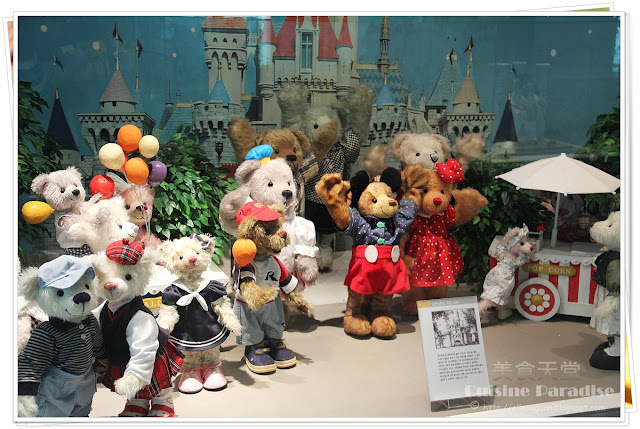 For Part II of our Jeju discovery I would share more on the Horse Riding, Teddy Bear Museum, Glass House Museum, Nanta Show and etc.
Posted By: Cuisine Paradise