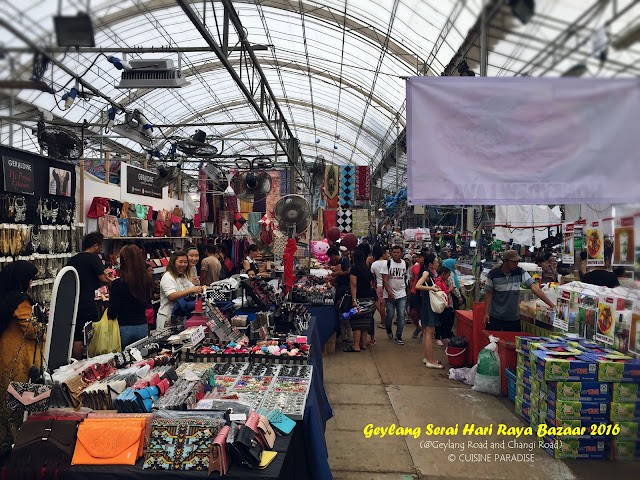 Hello everyone! What are you busying with this weekend? Time flies while I was drafting this post about our first visit to the Geylang Serai Hari Raya Bazaar (also known as Ramadan Bazaar @ Geylang Serai) last weekend. This festive bazaar is definitely huge with around 800 stalls selling different range of things from fusion to local street food & beverages, clothing, carpets, accessories and more.

Geylang Serai Hari Raya Bazaar is running daily from June until 06 July 2016 with most of the stalls opening from 5.00pm till late in the evening. The area is accessible by car with ample of parking lots available at the HDB carparks or within walking distance by public transport from Paya Lebar MRT station (walk towards Sims Avenue). 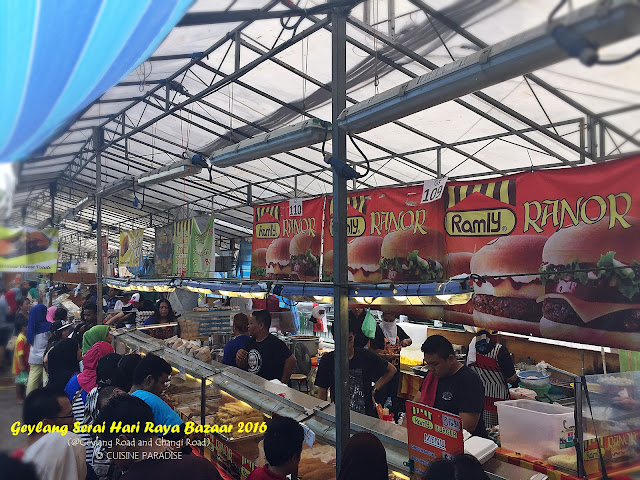 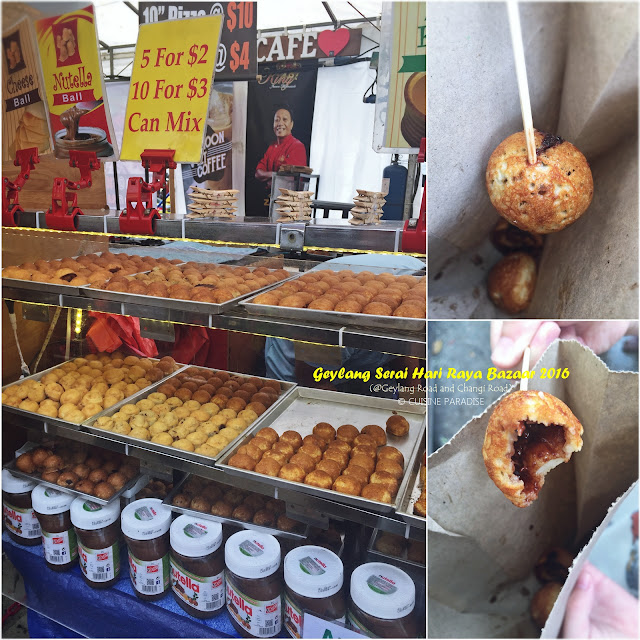 These mini pancake balls are very yummy and additive. It comes in a few fillings with Nutella, Peanut Butter & Cheese. The boy bought a pack with nutella filling ($2 for 5) and instantly he finished it less than 5 minutes. 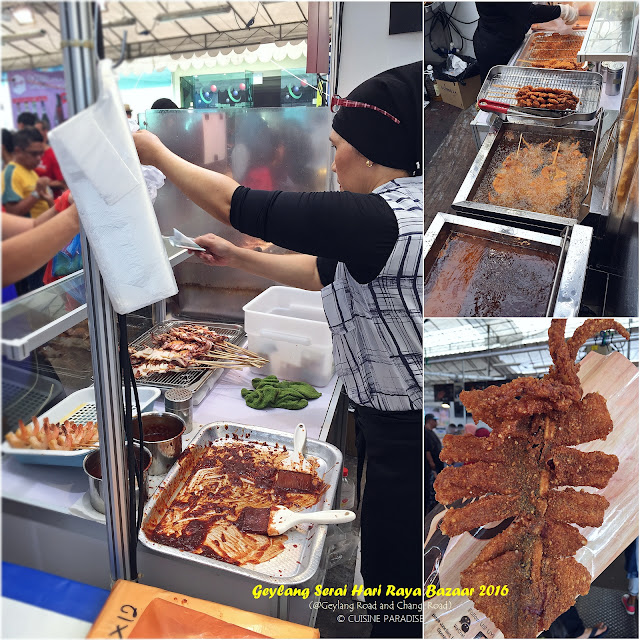 Crispy Fried Squid ($7) is one of the "must try" item at the bazaar and you can choose to add-on a seasoning of your choice from salt & pepper, curry, sour plum and etc to enhance the taste. At the corner of the same stall they also has this Sotong Bakar ($4) which is grilled squid brushed with either BBQ sauce or fiery sauce before serving.

We bought the Crisp Fried Squid and it was so yummy with crisp outer batter and tender meat underneath.


Check out this clip on our first visit to the Geylang Serai Hari Raya Bazaar. 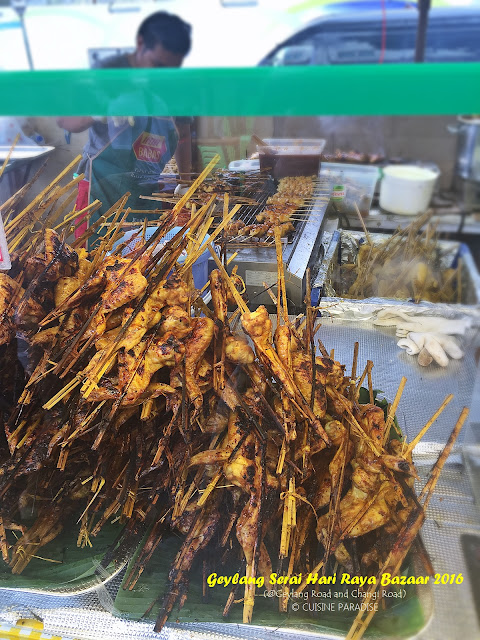 If you like grilled chicken wings do try the Ayam Percik ($2) which is a well-seasoned grilled chicken that was clipped with a pair of bamboo sticks. When bite the meat is so tender and juicy which almost melted in our mouth. 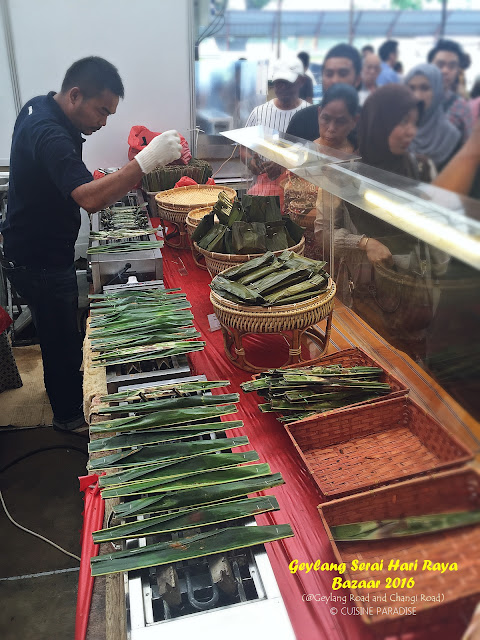 Ikan Tangkap Sendiri Otak (just beside the fried squid) and Mr Wadeh are two extremely popular stalls at the bazaar too. Their Prawn and Sotong Otah Otah are priced at 4 for $3.00 whereas the Original Fish Otah Otah at 4 for $2.00. 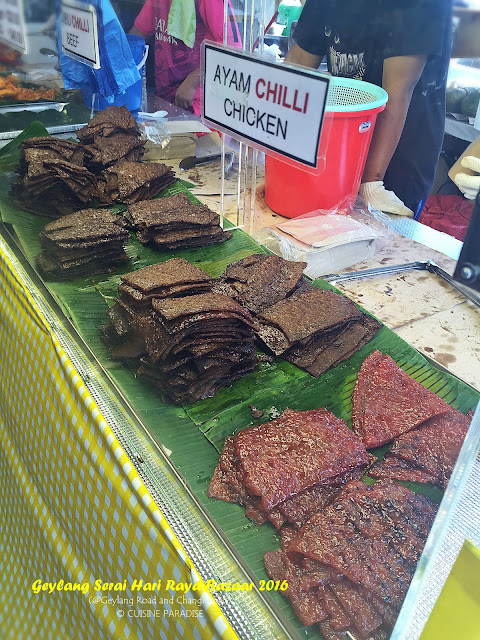 We are surprised to see this sliced barbeque meat which is similar to one of our popular Chinese New Year snack; bak kwa (BBQ meat). But here they called it DenDeng which is a 100% halal sliced barbeque dried meat originated from Indonesia. You can choose from the variety of beef, spicy beef or chicken at the price range from $4.50/100g to $40/kg 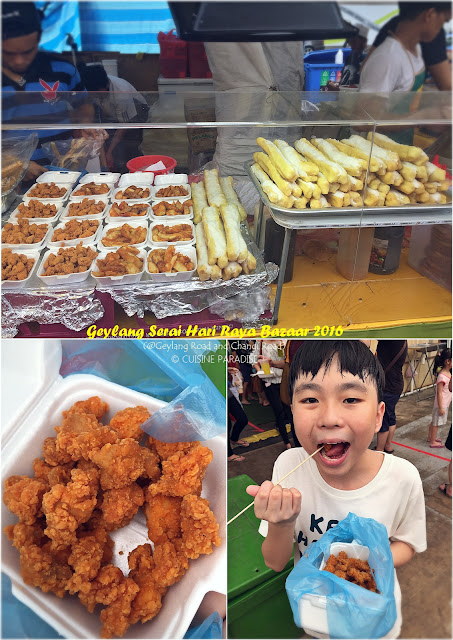 The boy enjoying his favourite popcorn chicken ($3) from one of the stalls. 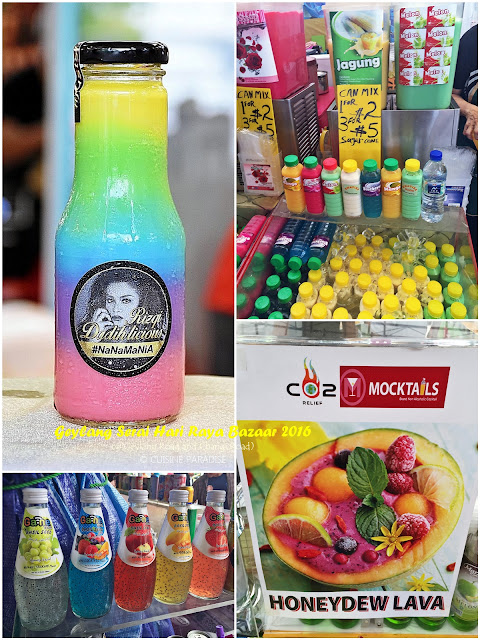 Oh ya along the way, you can find many beverage stalls selling different type of drinks from the usual can drinks to some eye-catching and Instagram worth stuffs such as Watermelon Volcano ($6.90 medium; $12.90 large), Honeydrew Lava and Rainbow Pudding Drink (Dadih; $5 per bottle). Didn't managed to try the Watermelon Volcano because it was not open even when we left at 5.30pm. 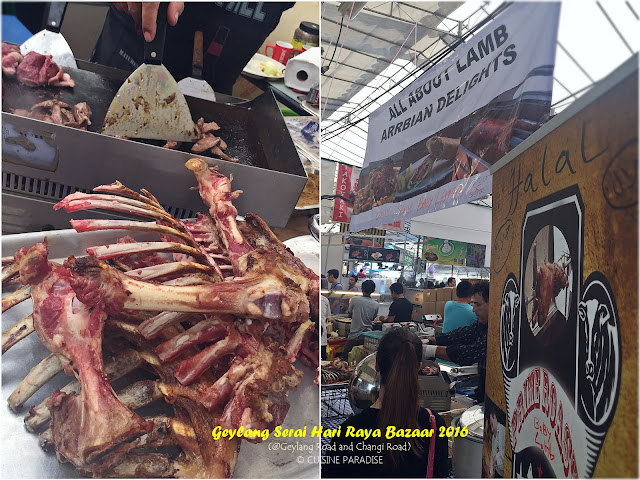 There is this stall selling tender stir-fry lamb fillet just opposite the otah stall which draw a long queue too. 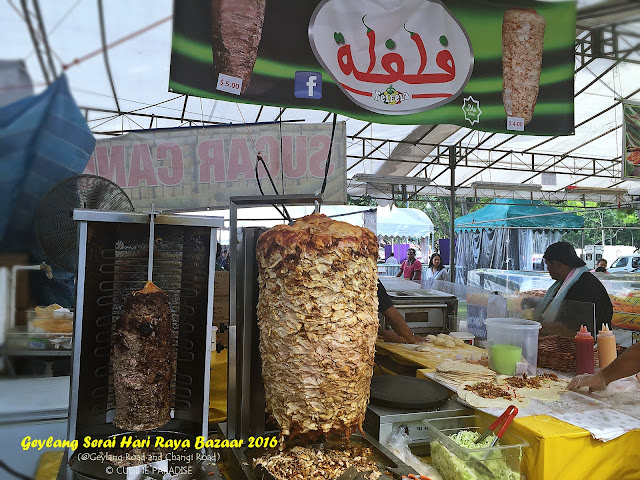 Like Ramly Burgers, Turkish Kebab is another popular food found in the bazaar which we spotted more than 5 stalls along the same stretch. This stall located near the open carpark at Engku Aman Road made their own wrap on the spot to go with the roasted meat. 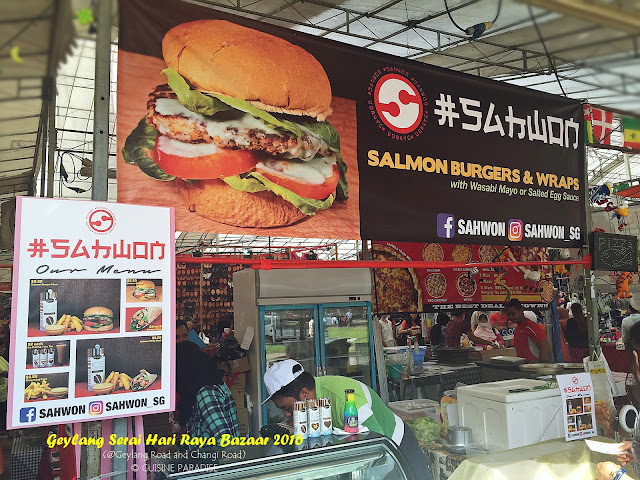 For a healthier option, you can grab either a Salmon Burger ($5.50) or Wrap ($4) that sandwich with smoked salmon and herbs plus drizzle of wasabi mayo or salted egg sauce. As for beverages they do have Ice Coffee ($2) or Paddle Pop Pudding Dadih ($5); a Malay-style milk pudding drink layers with corn, pandan, yam and bandung flavour in a bottle. Rainbow Bagel ($8) is most probably the most Instagrammable food item at the bazaar. It is filled with strawberry cream cheese, biscuit crumble, and toasted marshmallows before finishing with a drizzle of maple syrup. To some this pretty gem can be quite expensive but if you don't mind the price and amount of colouring in it you might want to get one to try it out. Besides bagel, the stall also sell soda and ice lollies too.

*Note: They has a cafe around Upper Thomson Area known as WORD.Bistro selling similar items. 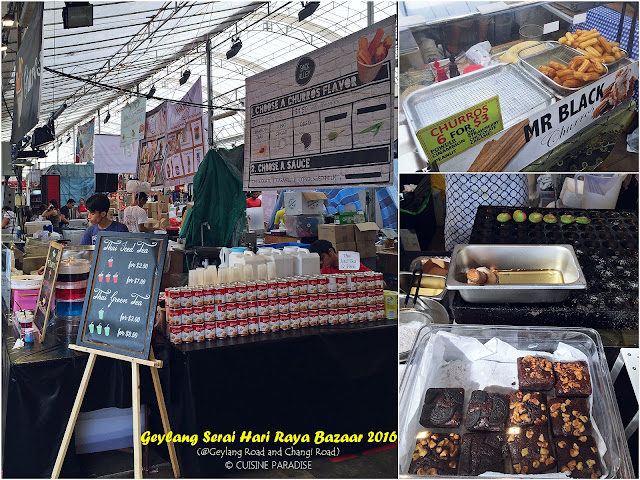 Instead of the usual Malay style desserts, this year the bazaar also includes many trendy items such as churros, pancakes, soft serve, candy floss drink and Thai iced milk tea. Along the way we saw at least 5 churros stalls selling flavour such as churros with salted egg yolk sauce, pandan churros with gulua melaka dip and soft serve ice-cream with churros. 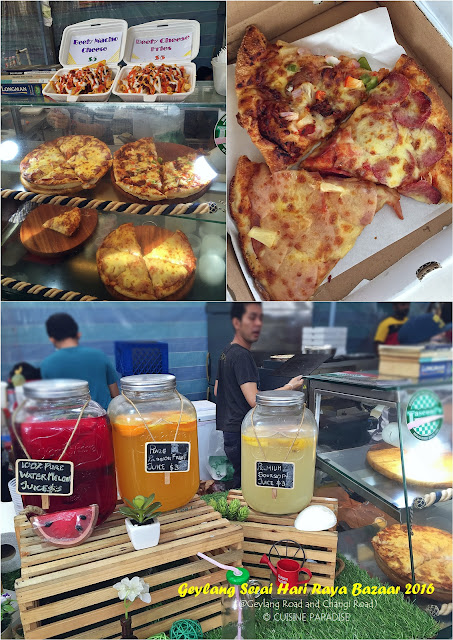 After exploring around the bazaar we bought some freshly made pizza from The Fizzy Brothers which cost $10 for 3 slices of your choice. The serving is huge with generous amount of toppings and cheese which we think it taste even better when compared to some of the other popular pizza outlets. 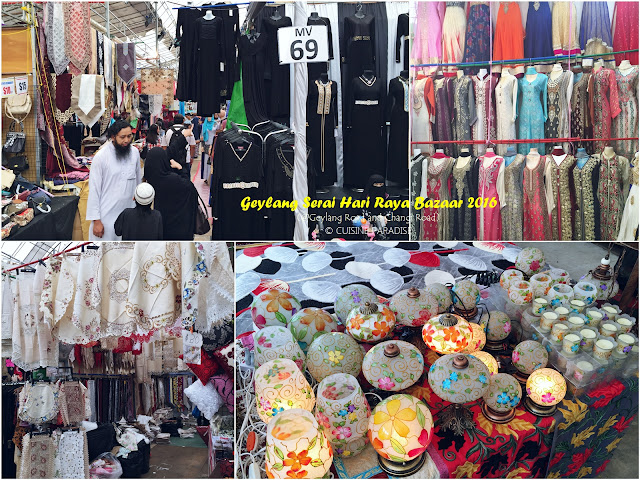 After all the food feast it's time to go around hunting for some great deals on traditional or modern festive outfits especially for families and couples who are looking for matching designs. On top of that stalls selling home decor, accessories, curtain, homemade cookies, electrical items and etc are also available at the bazaar. 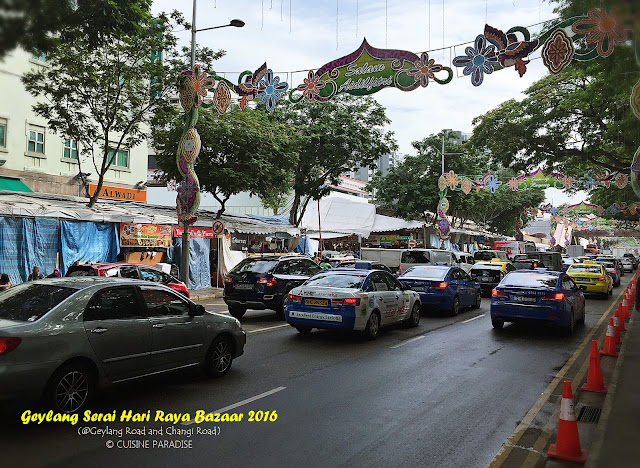 The huge bazaar is located along both sides of Geylang Road (near Haig Road & Geylang Serai market and food centre) so you can make use of either the overhead bridge or traffic light to access the area. The opening hours of the stalls are from 5.00pm onward but during weekends most of them are open in mid-afternoon. So if you love street food and festive atmosphere do check them out this coming week before it ends at 06 July 2016.