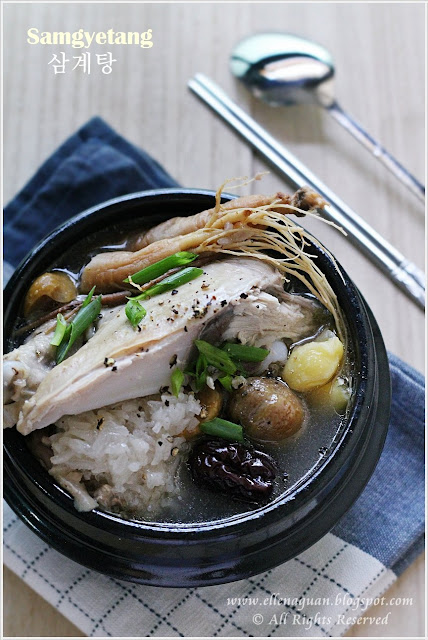 Ginseng is one of Korea's most famous products which encompassing goodness as a booster for the immune system. As a source of energy and vitality, it promotes longevity and increases libido. There are different grades of ginseng and the top grade being the wild Korean ginseng which is considered to be the best whereas the fresh cream-coloured roots are blended for drinks and used for cooking.

Samgyetang(삼계탕/参鸡汤), a Korean style chicken soup which consists of a whole young chicken and Korean Ginseng. In Korean culture, it is believed that this soup can prevent illness and it is traditionally served in the summer for its supposed nutrients, which replaces those lost through excessive sweating and physical exertion during the hot summers in Korea. 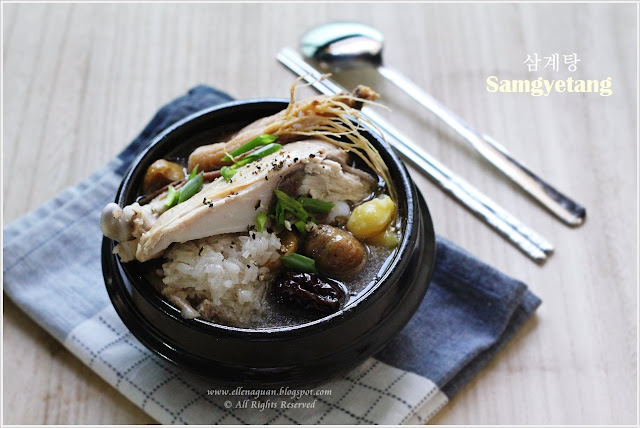 I still remember vividly, Andy our Korean tour-guide mentioned to us that this Samgyetang(삼계탕) or “ginseng chicken soup” is one of their popular dish in Korea. And during the 3 hottest days of the year in Summer which they called "bok days(복날)" according to the Lunar Calendar, people would take a break, feast on foods to replenish their strength and stamina. So this Samgyetang(삼계탕) becomes one of their popular choices to strengthen their body. 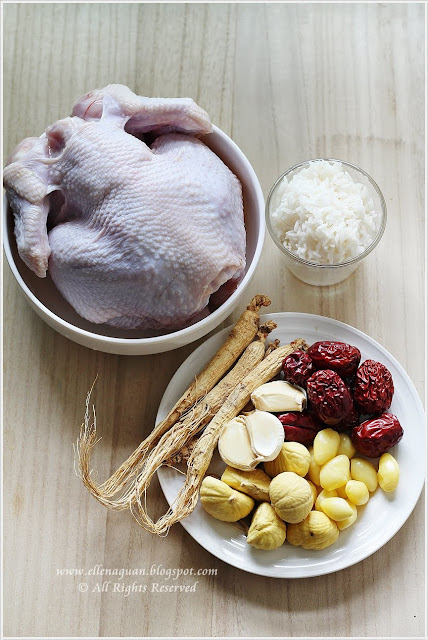 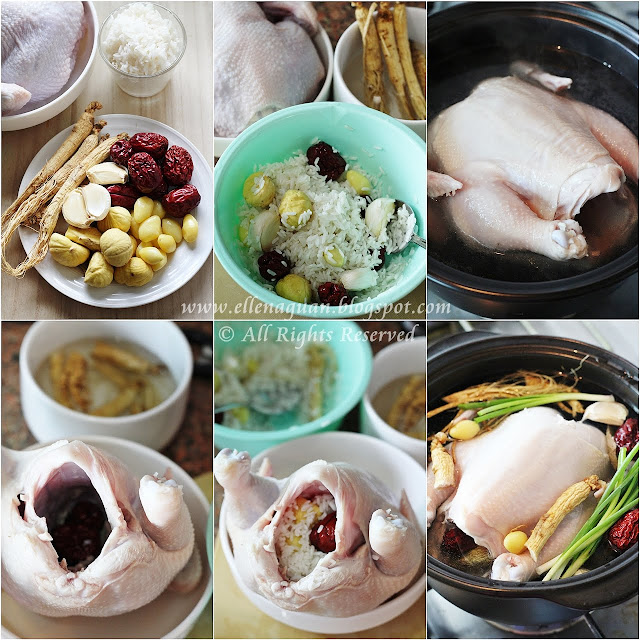 Method:-
1. Clean and rinse the chicken thoroughly and pat dry with paper towels. Set aside. Meanwhile drain the soaked glutinous rice and combine with the rest of the stuffing ingredients.

2. First using one or two red dates to block the opening from the chicken neck area in order to prevent the stuffing from oozing out during simmering. Next stuff the rice mixture into the chicken.(remember not to pack the mixture too tightly as it will swell during cooking)

3. When done, close the cavity of the chicken by threading a skewer/toothpick or using portion of the ginseng root/red dates to block the opening.

4. Place chicken in a soup pot/claypot large enough to hold the chicken, add in enough water to cover the chicken then scatter in remaining ingredients (ginseng roots, garlic, ginger, red dates, extra ginkgo nuts and chestnut) and bring it to boil.

5. Skim off the white foam, cover and low the heat and simmer gently for about 50 - 60 minutes(turning the chicken once/twice).

6. To serve,remove the chicken from the pot and cut into halves or quarters in small bowls, ladle some ginseng soup over it and garnish with some ground black pepper and chopped spring onion. 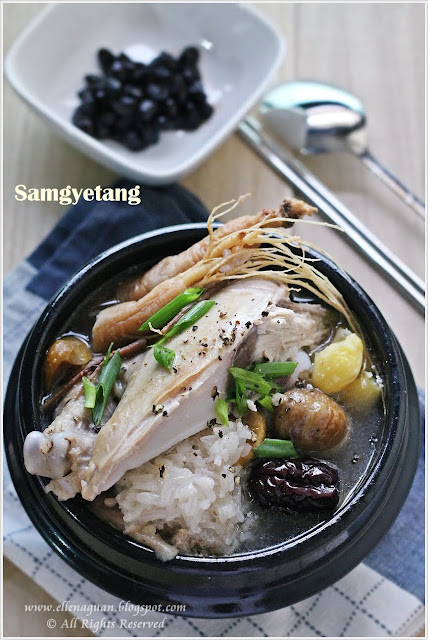 If you compare this recipe with the previous Korean Ginseng Chicken Soup(参鸡汤) recipe which I have shared sometime back, you would notice this recipe above is similar to the euthenics Samgyetang which consists of ginseng roots, chestuts, ginko nuts, garlic and glutinous rice.

We can never get tired of this fragrant and delicious Ginseng Chicken Soup which could also act as one-pot dish due to it's ingredients.