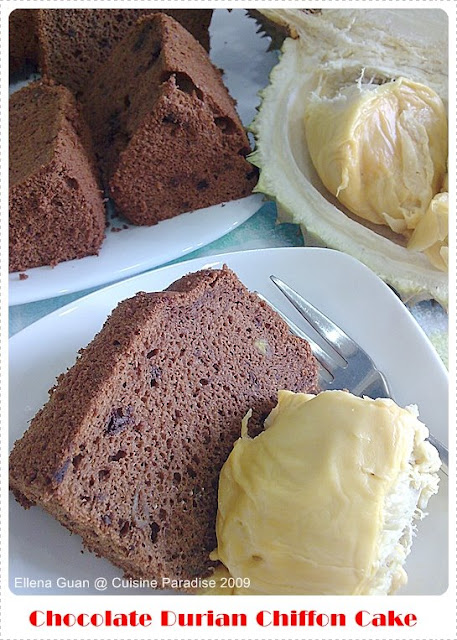 This is 2nd Chiffon Cake recipe that I experiment and tested. I used the combination of Cocoa Powder + 70% Dark Chocolate + fresh DURIAN as main ingredients. So you can imagine having a bite on this slice of cake with such combination where you can actually smell and taste the baked durian in a rich cocoa content. Since this is a chiffon cake, you will find the texture of the cake to be light, spongy and fluffy rather than that greasy and dense compare to cake. 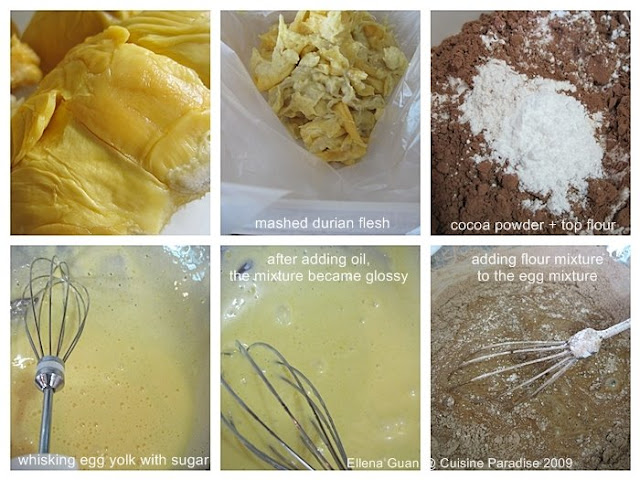 As while sharing the chiffon cake recipe and ideas with some of my friends, they are quiet turn off in making even though they are keen. They are having the phobia as what I used to have in the whisking of egg white to stiff peak and stir it into the yolk mixture. We always have this ideas that, chiffon cake is very delicate to make because of the separation of egg yolk and white mixture. It seems like we can't go wrong in one of the steps or else the whole process will be ruin. 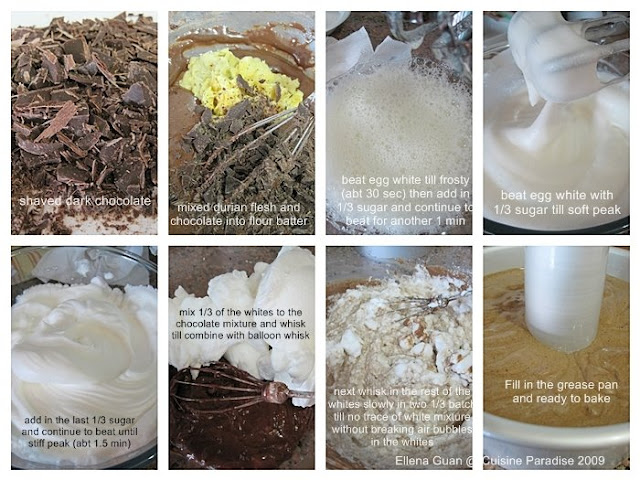 So in order to build up their confident and as well share with readers whom are also interested in trying the recipe. I decided to take pictures of each steps and write little notes on them so that they will have roughly and idea of how each process look like.

Method:1.Removed the seeds from the durian flesh, weight it accordingly to the recipe then mashed it and set aside.
2. Separate the egg yolks and white into two separate bowls. (carefully do not leave any trace of egg yolk in the egg whites mixture)
3. Use a balloon whisk to whisk the egg yolks and 40g of caster sugar(add in 3 separate additions) till thick and sticky.
4. Slowly drizzle in the oil while continue to whisk at the same time then follow by the water till the mixture is well combined. (refer to the pictures above, the mixture will be thick and glossy after adding the oil)
5. Add the sifted flour mixture into the egg mixture and continue to whisk till the flour is fully incorporated into the batter.
6. Next stir in the durian paste and chopped chocolate using the whisk till combined.
7. Use a kitchen paper towel to wipe off the oil from the cup then grease the tube-pan lightly with the oil and set aside for later use.
8. Preheat the oven to 180 degree.
9. Beat egg whites and 1/3 of the caster sugar with an electric mixer until mixture becomes frothy and foamy. Then add in another 1/3 of the sugar and continue to beat on medium speed until almost soft peaks form then add in the last 1/3 of the sugar and beat until stiff peaks form. (you can refer to the above pictures on whisking the egg whites, the whole process takes about less than 5 minutes)
10. Add the beaten egg whites into the egg yolk batter in 3 separate additions, with the 1st addition using the balloon whisk to incorporate it into the yolk mixture till combine without trace of whites.
11. Next fold in the 2nd and 3rd addition of whites using the balloon whisk in a gentle manner in order not to knock off the air in the whites, just fold till no trace of egg whites and the mixture are well combined.
12. Before pouring the mixture to the greased pan, use a spatula to give a final stir to make sure there is no flour or egg whites mixture at the bottom of the mixing bowl.
13. Lift up the bowl to height, then pour the mixture into the pan and tap the pan 2 - 3 times on a table top to get rid of any trapped air bubbles in the batter.
14. Baked the cake in the preheated oven for about 30 minutes or when the surfaces turns golden brown. (I baked on the 2nd lower shelf of my built in oven using upper and lower heat function. You can insert a skewer into the centre and test if it comes out clean)
15. Remove from the oven and invert the pan immediately and let it rest on top of a cup. Let it cool completely before unmould.(refer to the picture below on how to invert the pan over a cup to cool down)
16. To remove the cake from the pan, run a thin-bladed knife (i use a small rubber spatula) around the inside of the pan and the center core.
17. Release the cake and run the knife/spatula along the base of the pan to remove the cake.
18. Cut into serving size and serve with a cup of tea or coffee. 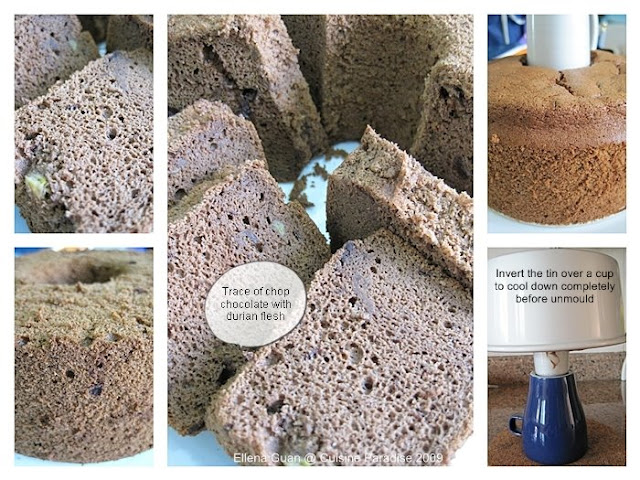 From the pictures you can realise and see the texture of the Chiffon cake is actually quiet spongy, moist and full of extra goodness..... So are you more confident now to try out on any of the Chiffon Cake recipe that you love.
Posted By: Cuisine Paradise