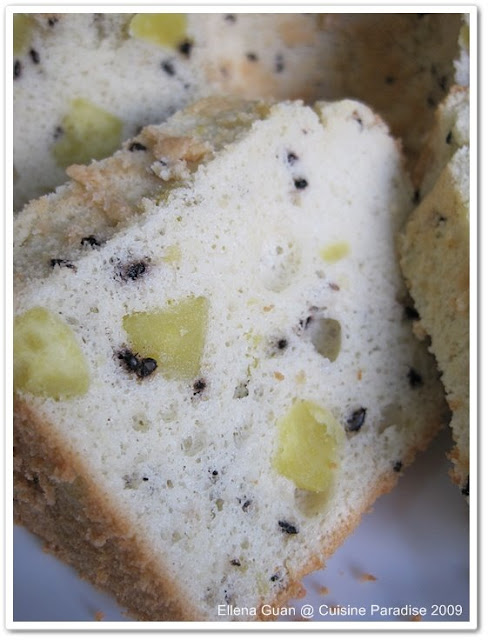 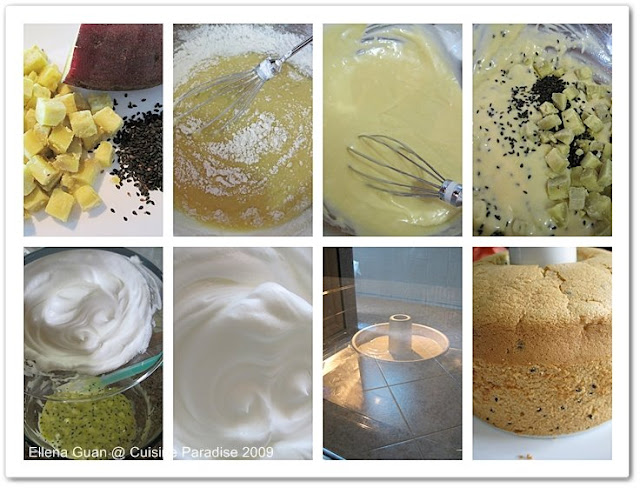 Chiffon cake making was rather a challenge for me because this is only my 2nd time I try making it after the 1st bake of Lemon Poppy Seeds Chiffon Cake some time ago in August 2008. Personally I love the taste and texture of chiffon cake but then the process and tales of making it put me on hesitation. I am so scare that it doesn't raise up nicely, the inner part is not properly cook while the outer layer is burnt and etc. But after reading all the recent chiffon cakes posts, I am once again tempted to give a try on this recipe. The recipe is rather easy to follow as long as you get the steps of whisking and folding the egg white in the correct sequence.

Method:
1.Wash and brush the outer skin of the sweet potato then steam it over a rack for about 20 - 30 minutes depend on the thickness. (the sweet potato is cooked through when the skewer or toothpick is able to pierce through without difficulty)
2. Cut the cooked sweet potato into 0.5cm thickness slices then peel off the skin and cut into small cubes, set aside for later use.
3. Separate the egg yolk and white into two separate mixing bowls. (carefully do not leave any trace of egg yolk in the egg whites mixture) then use a balloon whisk to whisk the egg yolk and brown sugar(add in 3 separate additions) till thick and sticky.
4. Slowly drizzle in the oil while continue to whisk at the same time then follow by the water till the mixture is well combined.
5. Add the sifted flour into the egg mixture and continue to whisk till the flour is fully incorporated into the batter.
6. Next stir in the sweet potato cubes and sesame seeds using a spatula till combined.
7. Use a kitchen paper towel to wipe off the oil from the cup then grease the tube-pan lightly with the oil and set aside for later use.
8. Preheat the oven to 180 degree.
9. Beat egg whites and 1/3 of the caster sugar with an electric mixer until mixture becomes frothy and foamy. Then add in another 1/3 of the sugar and continue to beat on medium speed until almost soft peaks form then add in the last 1/3 of the sugar and beat until stiff peaks form. (the whole process takes about less than 5 minutes)
10. Add the beaten egg white into the egg yolk batter in 3 separate additions, with the 1st addition using the balloon whisk to incorporate it into the yolk mixture till combine without trace of whites.
11. Next fold in the 2nd and 3rd addition of whites using the balloon whisk in a gentle manner in order not to knock off the air in the while, just fold till no trace of white and the mixture are well combined.
12. Before pouring the mixture to the greased pan, use a spatula to give a final stir to make sure there is no flour or egg white mixture at the bottom of the mixing bowl.
13. Lift up the bowl to height, then pour the mixture into the pan and tap the pan 2 - 3 times on a table top to get rid of any trapped air bubbles in the batter.
14. Baked the cake in the preheated oven for about 30 minutes or when the surfaces turns golden brown. (you can insert a skewer into the centre and test if it comes out clean)
15. Remove from the oven and invert the pan immediately and let it rest on top of a cup. Let it cool completely before unmould.
16. To remove the cake from the pan, run a thin-bladed knife(i use a small rubber saptula) around the inside of the pan and the center core.
17. Release the cake and run the knife/spatula along the base of the pan to remove the cake.
18. Cut into serving size and serve with a cup of tea or coffee.

Notes:
a) I used the purple skin type of Japanese Sweet Potato rather then the local orange flesh type.
b) To test whether your beaten egg white is of stiff peak form, turn mixing bowl upside down, the white will remain without falling.
c) Preheat the oven half way through while whisking the egg whites so that the oven temperature will be ready and not over heated when you have all the mixture done and ready to bake. 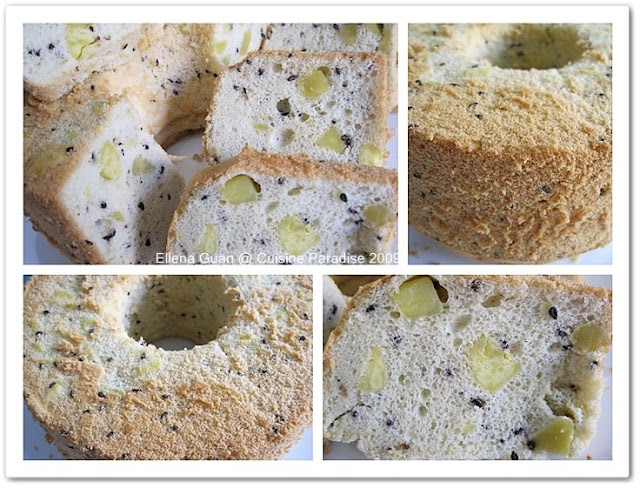 We really love this chiffon cake which taste light and fragrant compare to the normal pandan cake that we used to have. The addition of the steam sweet potato cubes and black sesame seeds also add some extra texture it. Those whom I share this cake with all love it taste and texture because they find it so healthy without the use of butter and normal coconut milk.
Posted By: Cuisine Paradise