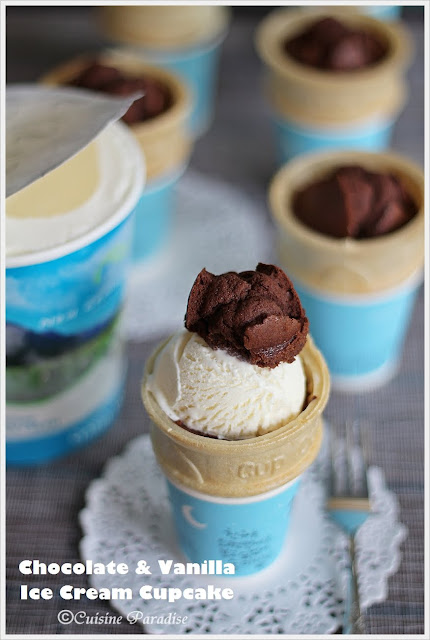 Isn't these "ice-cream cone cupcakes" look great for special occasions such as Birthday party, school function or even tea-time. I am sure not only the Kids fancy this,  Adults like us will also love eating our favourite cake in a cone instead of on a plate too. So why not give this a try and start making your favourite cupcakes in ice-cream cones instead of paper cases. Or just like us if you don't fancy frosting your cupcakes you can even eat it on it's own or top it with an extra scoop of your favourite ice-cream. 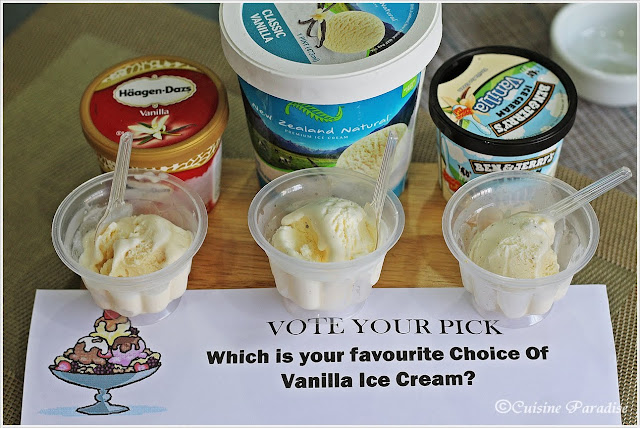 I always love dessert such as Chocolate Brownie or Molten Chocolate Cake that serves with a generous scoop of premium Vanilla ice-cream. And when compared to other flavour, vanilla ice-cream is said to be the most popular flavour like by most consumers which is why you can always see vanilla ice-cream appears in most dessert corner or menu in major cafes/restaurants.

Since I am making some ice-cream cone cupcakes for my neighbours as one of our tea snacks we decided to play a small game while waiting for the cupcakes to cool off. To start off we gathered 3 different brands of vanilla ice-cream to do a blind taste test and see which is the most popular choice among us. In this game, each family contribute one of their favourite brand of vanilla ice-cream and I would scoop it into 3 different cups and let all the participants take a blind taste test on each of them. 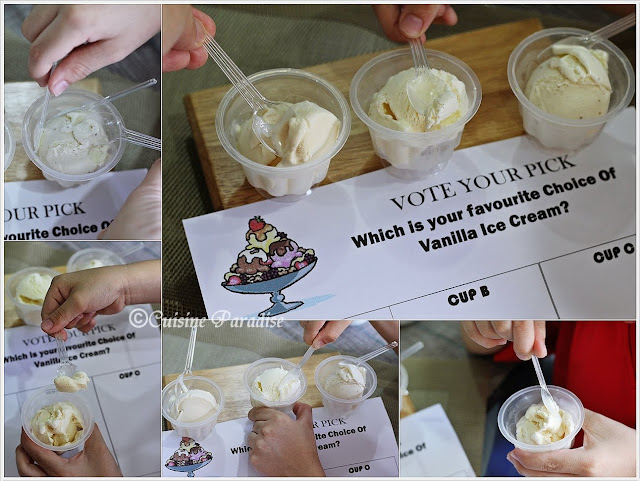 For this test we had 9 participants from 3 different families with age group ranging from the youngest; 5 years old to the oldest 60 plus. Each participants will get to sample the prepared Vanilla Ice-cream from Haagen Dazs, New Zealand Natural and Ben And Jerry's without any knowledge of which brand they are tasting. So can you make a guess which is the most popular choice out of the 3 brands that most of them pick?(result is shown at the end of this post) But before we scroll down to read the "taste test" result, let's take a look at the Chocolate Ice-cream Cone Cupcakes recipe shown below first. 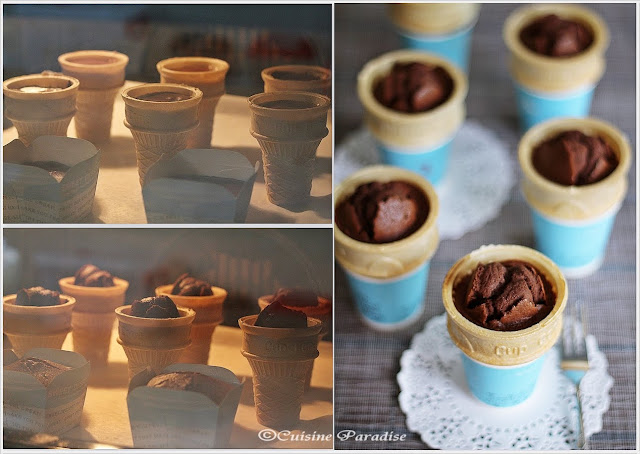 I have bookmarked this recipe for quite sometime but was not very keen to attempt due to the frosting part. So with some read-up and brainstorm with my facebook friends, I decided to give it a try without doing the frosting and replace it with a good scoop of Vanilla Ice-cream. 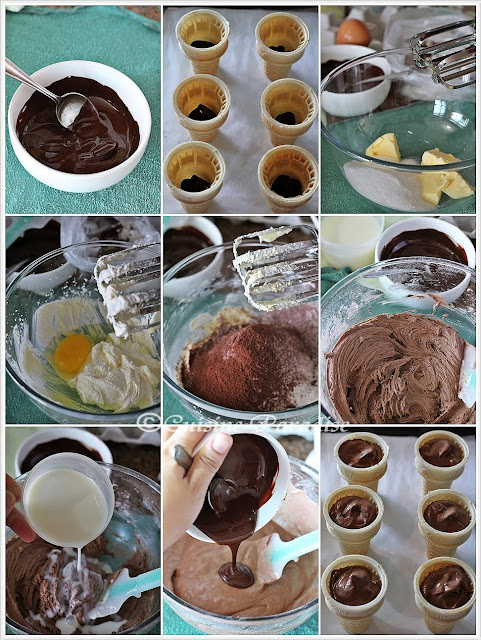 Method:-
1. Melt 50g of dark chocolate in microwave on High for 40 seconds with an interval of 20 seconds each.

2. Arrange ice-cream cones on baking tray and place 2 feves of dark chocolate at the base of each cone.

3. Preheat oven to 160 degree. Beat butter and sugar in a bowl till light and creamy, add in egg and beat till well mixed.

4. Next sift over flour mixture(plain flour, baking powder and cocoa powder) and continue to beat until mixture became a gluey batter.

5. Fold in milk and stir with either a spatula or hand-held whisk till combine before stirring in the melted chocolate.

6. Spoon batter into each cone and fill up 0.5cm away from the rim. Bake in preheat oven for 15 minutes; increase oven temperate to 170 degree and continue to bake for another 10 minute or when skewer insert and comes out clean .

7. Allow cupcakes to cool for 10 minutes, running a small knife round the "hump" on top of the cake and remove it before stuffing it with a scoop of Premium Vanilla Ice-cream.

8. You can either drizzle extra melted chocolate, sprinkler or use the cut-off cake to place on the ice-cream to act as toppings. 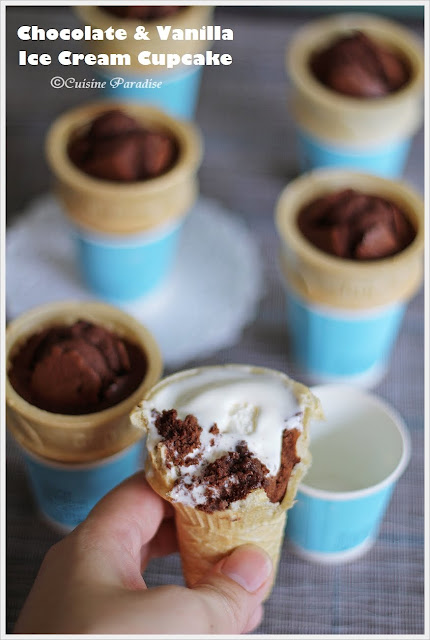 These cupcakes taste great even without any frosting. The cake itself is soft, moist and infused with "Triple" chocolate content. With each bites you can taste 3 different texture in one mouthful such as the crispy ice-cream cone, moist chocolate cake and cold ice-cream all mingling in your mouth.

For your information these cupcakes are best to be eaten within an hour or warm so that the ice-cream cones will reminds crispy instead of soft and soggy after a few hours. But if you intend to keep for longer time you might want to consider reheat it in a 200 degree oven for about 3 minutes to revive the "crispness" of the ice-cream cones.

Result Of Our
BLIND TASTE TEST 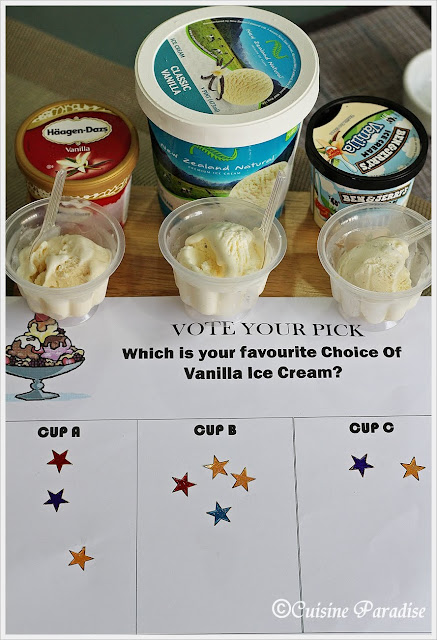 Tata!!!!! Have you make the correct guess? Or you are surprised with the result shown above? Yes! I myself was surprised when I saw the results; out of the 9 participants, 4 voted(2 Young Adults, 1 Teenage and a Kid) for New Zealand Natural immediately after they tried all the 3 different cups of ice-cream whereas the other 5 participants still took sometime to decide which product to cast their vote.

As for products wise you can still see tiny bits of vanilla pods in both New Zealand Natural and Ben And Jerry's. But in term of taste New Zealand Natural has the smoothest texture and mild creamy taste which does not overpower the vanilla fragrance. So if you like vanilla ice-cream perhaps you can also gather a few brands and do a blind taste test like us, have fun and enjoy the process as well as the eating those cold and delicious ice-cream especially during hot and humid days.