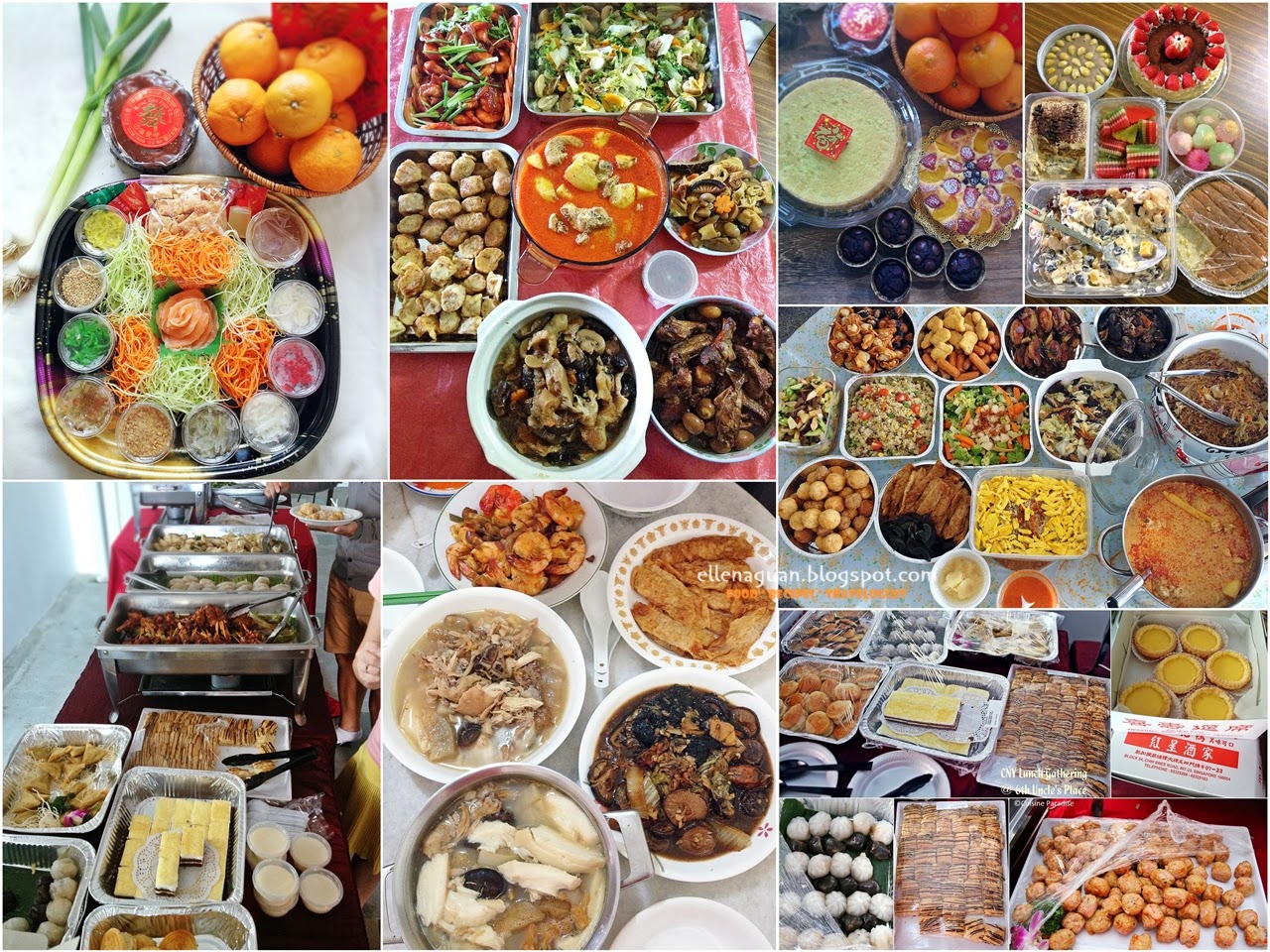 It had being almost a week since the last day of Chinese Lunar New Year (CNY) ended on 14 February 2014. And during that two weeks we get to meet up with relatives and friends as well as enjoying all the festive feast and family bonding time. With this summarized post I would like to share with you peeps on what we did during CNY as well as some festive food that we enjoyed.


Day 1 of Chinese New Year (CNY) is always reserved for those who are married to visit both parents' place and give them blessing of auspicious greetings. Every year we would have either lunch or dinner at in-laws place with similar dishes like Mini Buddha Jumps Over the Wall (佛跳墙), Braised Mushroom with Dried Oyster and etc for resemble of good luck.

This Mini Buddha Jumps Over the Wall is definitely my favourite soup during CNY as it consists many of the exotic seafood ingredients like sea cucumber, dried scallop, abalone, fish maw and etc.


Before lunch, we start off with Lo Hei Yu Sheng which I bought from Senjyu and surprisingly it came with generous serving of raw salmon (even for small yu sheng) and fresh shredded vegetables in bright colour and crisp texture too.

Dessert of the day was creamy-style Red Bean Soup which we all loved. If you are interested in this recipe, you can refer to one of my previous post here. 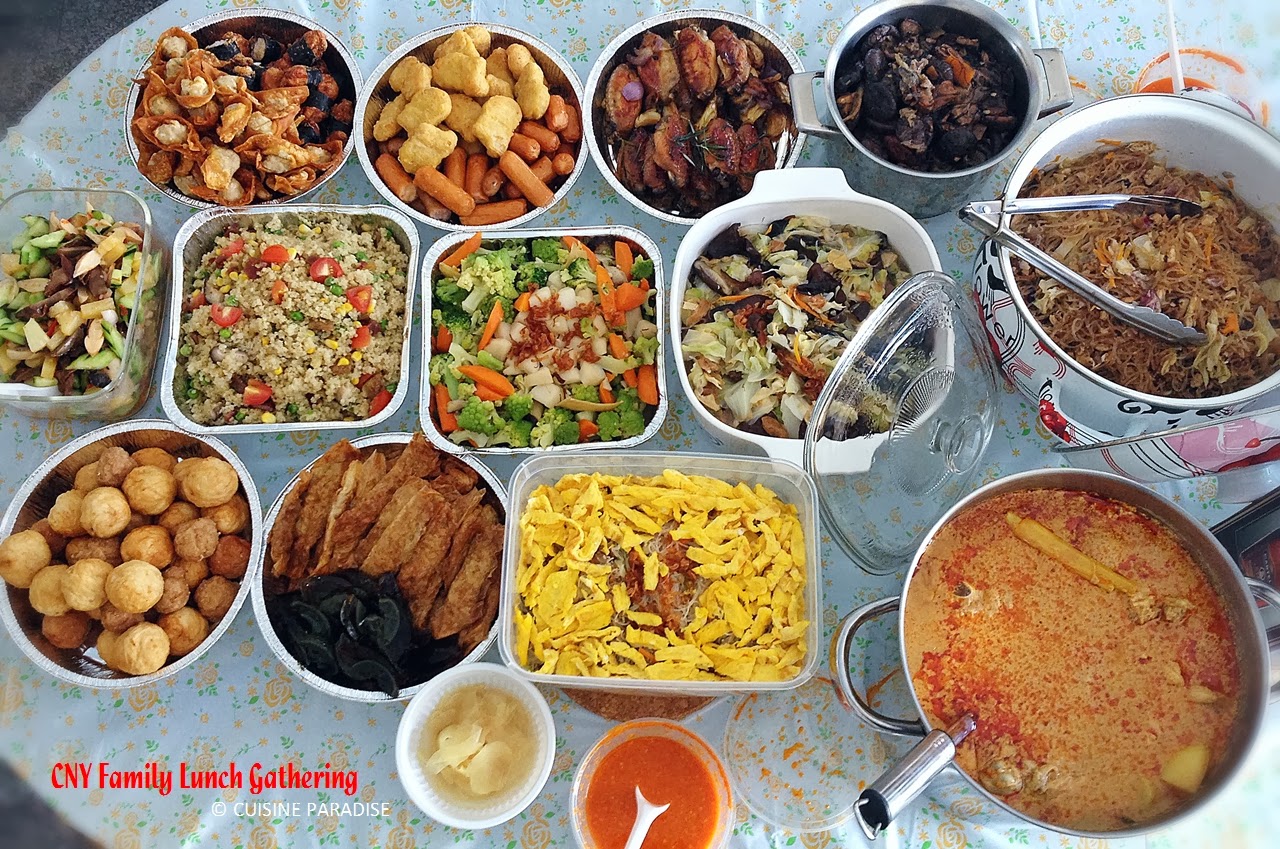 Day 2 of Chinese New Year gathering is still held over at my place so that I could help mum to prepare some lovely homecook dishes and bakes for her brothers and sister family (meaning my uncles and aunt).

More recipes and read up of this post can be found at another post on this link here.


Every year Aunty Irene (uncle liang's wife) together with my cousin; Sharon would partner together and prepared delicious homecook dishes and desserts for the big group of us who visit their house on the 3rd day of Chinese New Year. 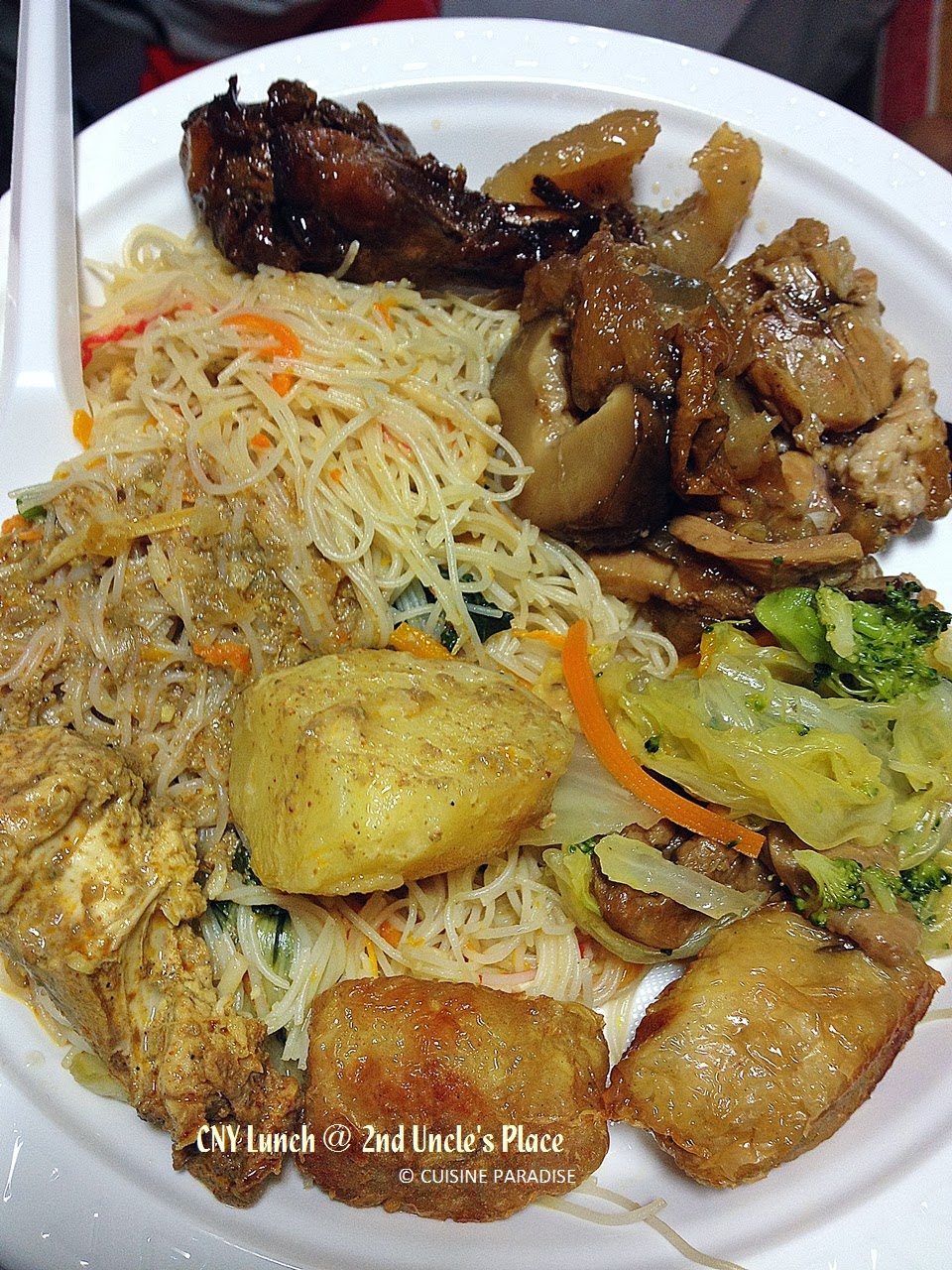 As usual I always love her signature "Braised Sea Cucumber" which loaded with my favourite ingredients such as sea cucumber, fish maw, black moss, roast pork and etc. And this year her curry chicken was also a hit too. According to Aunty Irene she used A1 brand chicken curry paste to marinate the chicken pieces over night before cooking them with extra lemon grass and onion to enhance the flavour.

Dessert corner was great with array of choices such as Tiramisu, Japanese Cheesecake, Orr Nee, Steamed Chocolate Cake and etc made by my cousins. And out of those mention; Tiramisu was one of the popular choice which gone within seconds.

On top of that cousin's Steamed Chocolate Cake was also another awesome treat with gorgeous look too. Love the strawberry and cream fillings which sandwich between layers of rich and moist chocolate cake.

Other than cakes and jellies, Aunty Irene also prepared some traditional Asian dessert like Orr Nee and Cheng Teng for the folks. Love the cheng teng and I even packed some home after the gathering too.


While having a short conversation with Aunty in the kitchen about some common herbs used to make herbal soup, I spotted this interesting recipes board which she put up at one corner of the kitchen.


Li Chun (立春) traditionally signifies the beginning of spring in East Asian cultures which often refers in particular to the day when the Sun is exactly at the celestial longitude of 315°. And on this special day, many believe that it is much easier to balance an egg on its end due to the sun crossing the equator making night and day equal on all parts of the earth. But I did try balancing the eggs again a few days after Li Chun and they do work well too so whether the myth is true or false I guess it's all up to once belief.


Another important day during the 15 days of Chinese Lunar New Year falls on Day 7 (年初七) which is also known as Ren Ri (人日) or meaning the common "birthday" of all human beings. On this special day, most of the people will have Yu Sheng (鱼生) and Longevity Noodles (寿面) in the celebration feast. You can read more about this on another separate post here.


This year Aunty Grace also ordered buffet spread from the same cater as last year; eCreative which we thought the food might have improvement over the year. But sad to say the standard of the dishes still remain average when compared with last year.

For the main dishes, only the fried rice and sambal prawn were good whereas the rest are just average. Most of us feedback that the stir-fry fish was the worst dish with most of the fish pieces lump together which makes the overall presentation looks so unappetizing. 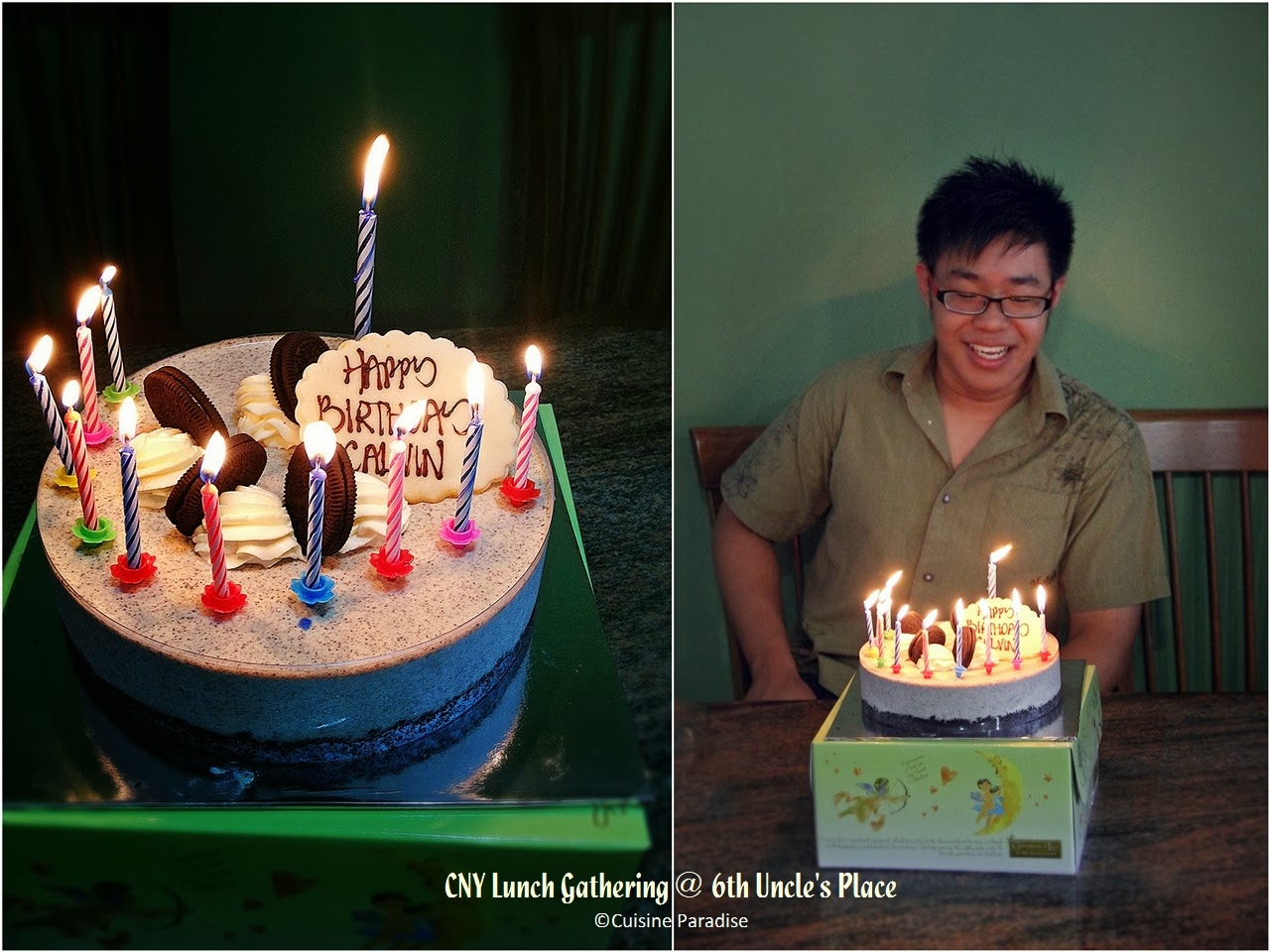 On that day we also celebrate cousin's 18th Birthday (ignore the candle on the cake because I guess uncle was over excited and he just put all available candle on the cake) and soon he will be serving National Service together with another 2 cousins after his A-Level.
Posted By: Cuisine Paradise