Time flies fast and today is the 4th day of Chinese Lunar New Year which I believe most of you had a great long weekend with abundant of food and bonding time during house visiting. And out of the 15 days of new year celebration we are still down with another 11 days more to indulge with the New Year atmosphere and food.

Here I would like to share with you how we celebrate our reunion dinners with family and relatives during the week of Chinese New Year Eve.


Since Lunar New Year falls on Friday, the in-laws decided to have an early reunion dinner on Sunday at our usual hangout restaurant; Jing Long Seafood Restaurant together with my mum and sis-in-law.


As usual Yu Sheng (鱼生) is always the first dish on the menu to kick off the reunion dinner which symbolised abundance, prosperity, luck and etc. And people believes the higher you toss the yu sheng, the more luck you will received throughout the year so this is a must have item during lunar new year period.


Last year we had a similar fish dish with crispy salted turnips too but this round they replaced the red grouper with Soon Hock for a chance. Overall this Crispy Salted Turnips Steam Soon Hock taste great with delicate and smooth flesh which was a sign of freshness.

Mixed Vegetable with Pork Belly was something new which we have not tried from their menu before. The braised pork belly, cabbage, dried oyster and mushroom were being wrapped around with a layer of beancurd skin and cooked in superior broth which taste flavoursome. Moreover the braised pork belly taste just right without being over or under cooked.

These Boiled Live Prawns might look fresh and good but they were not my cup of tea as I preferred "shelled" prawns or those that were steamed with Chinese herbs and wine.

The second last dish on the menu was Glutinous Rice with Chinese Sausage. This rice dish used to be served in a parcel wrapped in lotus leave which taste better with its unique fragrant. But now this traditional dish seems to have taken short-cut and lost it's flavour.

Instead of Cheng Teng or Orr Nee (yam paste) our dessert for that night was Mango Cream with Sago. Frankly speaking, I think it should be called Mango Soup rather than cream because it was so diluted with only some tiny bits of mango cubes in it. Personally I think it was not worth to get this as I rather go for cheng teng or red bean paste. 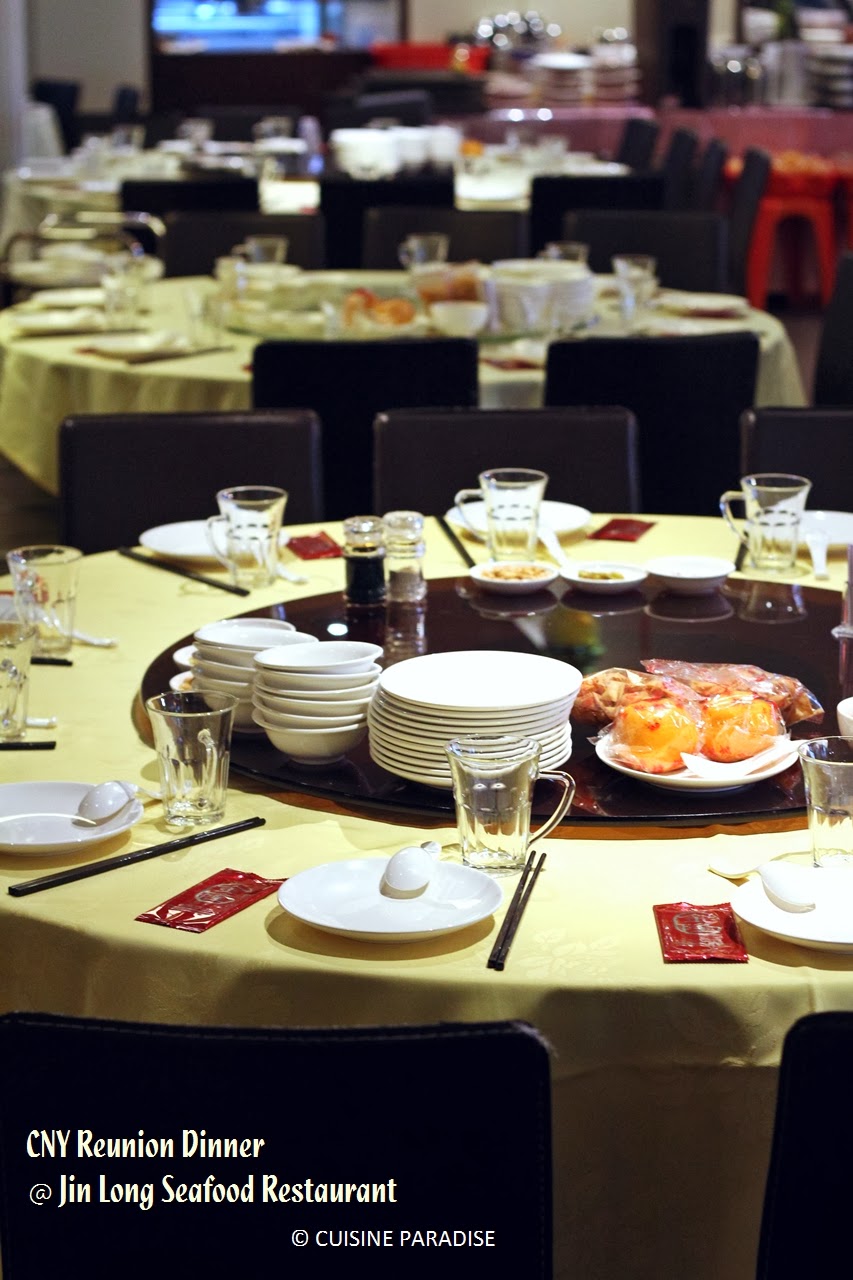 This year our reunion dinner for 6 pax comes with 7 course menu that cost around SG$268++ and most of us also agreed that their standard of preparation seems to drop slightly as compared to what we had last year. Still prefer to visit them during normal days where food are prepared wholeheartedly to satisfy our taste buds.


While busying with the New Year preparations, we had our own family reunion dinner on Tuesday (28 January 2014) which was a few days earlier because we are having another reunion dinner with Aunty Lily’s family on the eve of Lunar New Year. And since I am in-charge of the menu and groceries for the family gathering on 2nd day of Chinese New Year (年初二) I decided to get a few extra ingredients to prepare a simple reunion dinner for my family too.

For our own reunion dinner, I prepared 3 simple dishes together with our favourite Homemade Orr Nee (芋泥) as after meal dessert. First we had Chicken Stew which is an easy one-pot dish where you could add ingredients of your choice such as carrot, potato, mushroom and etc.

Method:-
1. Trim and clean the chicken drumsticks, cut them into halves and marinate with 1 teaspoon of cornflour; 1/2 teaspoon each of dark soy sauce, sesame oil and cooking wine. Set aside while preparing the rest of the ingredients.

2. Heat up a saucepan or claypot with 1 tablespoon of oil, saute onion until fragrant. Toss in carrot and potato cubes and continue to cook for another 2 minutes or until slightly golden brown.

3. Add in Chicken pieces and cook till lightly brown in colour. Add seasoning ingredients (except water) and give it a quick toss for a few seconds before pouring in hot water.

4. Bring mixture to boil, lower the heat and let it simmer for about 10 - 15 minutes or until chicken is cooked through; potato and carrot are soften and soup is almost thicken.

During Chinese New Year this (CNY) this "White-spotted Rabbit Fish (白肚鱼/拜年鱼)" is consider as one of the most auspicious new year fish which is available at all wet markets or even supermarkets. And this fish taste extremely delicious during this season and they are also larger in size and comes with roes that are particularly relished too.

And with the extra leeks that I bought, I also create another Leek Omelette dish wishing we have abundant of money to "count" [because Leek (蒜) has the same Pronunciation as count (算) in Mandarin] in the coming Horse year.

Method:
1. Preheat frying pan with 1 tablespoon of olive oil and saute the leek till fragrant and lightly brown.

2. Swirl in beaten egg around the frying pan and cook on 1 minute for both side. Remove and serve.

For me who grew up in a Teochew family, Orr Nee (yam paste) is one of our must have dessert during Chinese Lunar New Year. And the version we made now has been improvised with extra ingredients like mashed pumpkin, water chestnuts, gingko nuts and etc. I still remember the version that my dad used to make had fried shallot oil added to enhance the taste of this sweet dessert.

Recipe for this Homemade Orr Nee can be found in another separate post here.


New Year Eve reunion dinner with Aunty Lily's family this year was at Grand Banquet which is located on the 2nd floor of Hotel Royal at Queen Street. 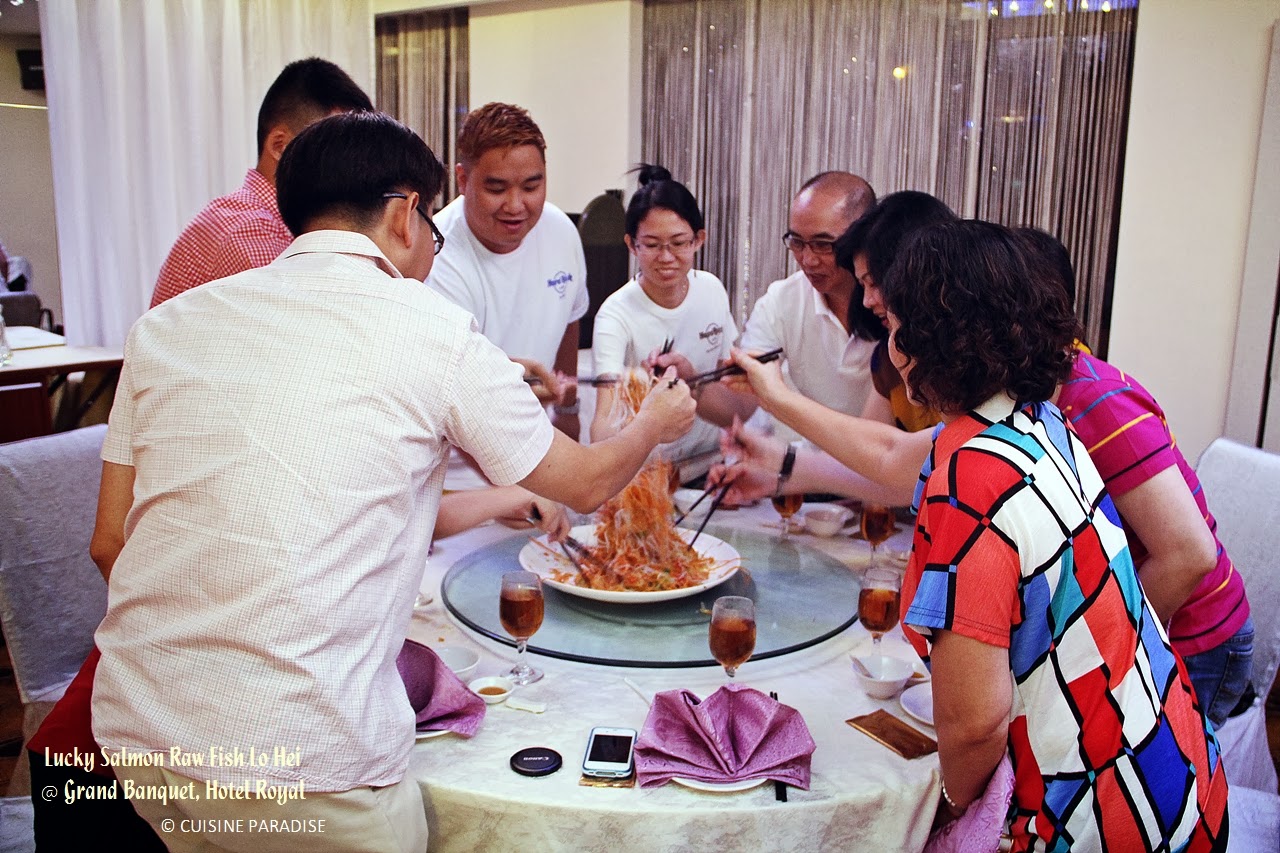 Same as previous year we agreed for second seating to avoid the crowds because we prefer not to rush through our dinner. The dinner begins with everyone tossing the "Lucky Salmon Lo Hei (捞起)" which is a necessary auspicious procedure before serving the New Year dishes.

A very messy soup with too many ingredients in it such as crab meat, fish maw, shark fins, mushrooms and etc. Luckily I am not a fan for this type of soup.

We had steamed lobster with minced garlic last year which I don't really fancy but this round this Baked Lobster with Pumpkin Milk was indeed good with cheesy like sauce that goes well with the fried mantou (fried bun).


Braised 10-Head Abalone with Dried Oyster was good except I don't like dried oyster due to it's taste and texture. The mini abalone was tender to bite and it goes well the the accompany sauce and lettuce too.


Cornflake Prawn was an additional dish ordered by my cousin which was not in the set menu. Although the prawn were deep-fried they still taste juicy and succulent when bite and we love the pairing of crispy cornflakes with the mayonnaise alike sauce which makes it so addictive.


Braised Ee-Fu Noodle which supposed to be flavoursome was quite disappointing because it was quite dry and tasteless. And I think those sold in Cze Char stalls taste even better than this.

Double Boiled Hashima in Almond Cream taste rather bland because the almond cream was not as fragrant as it supposed to be. And we felt the Hashima served in double-boiled version together with red dates and rock sugar would be a better choice than this. 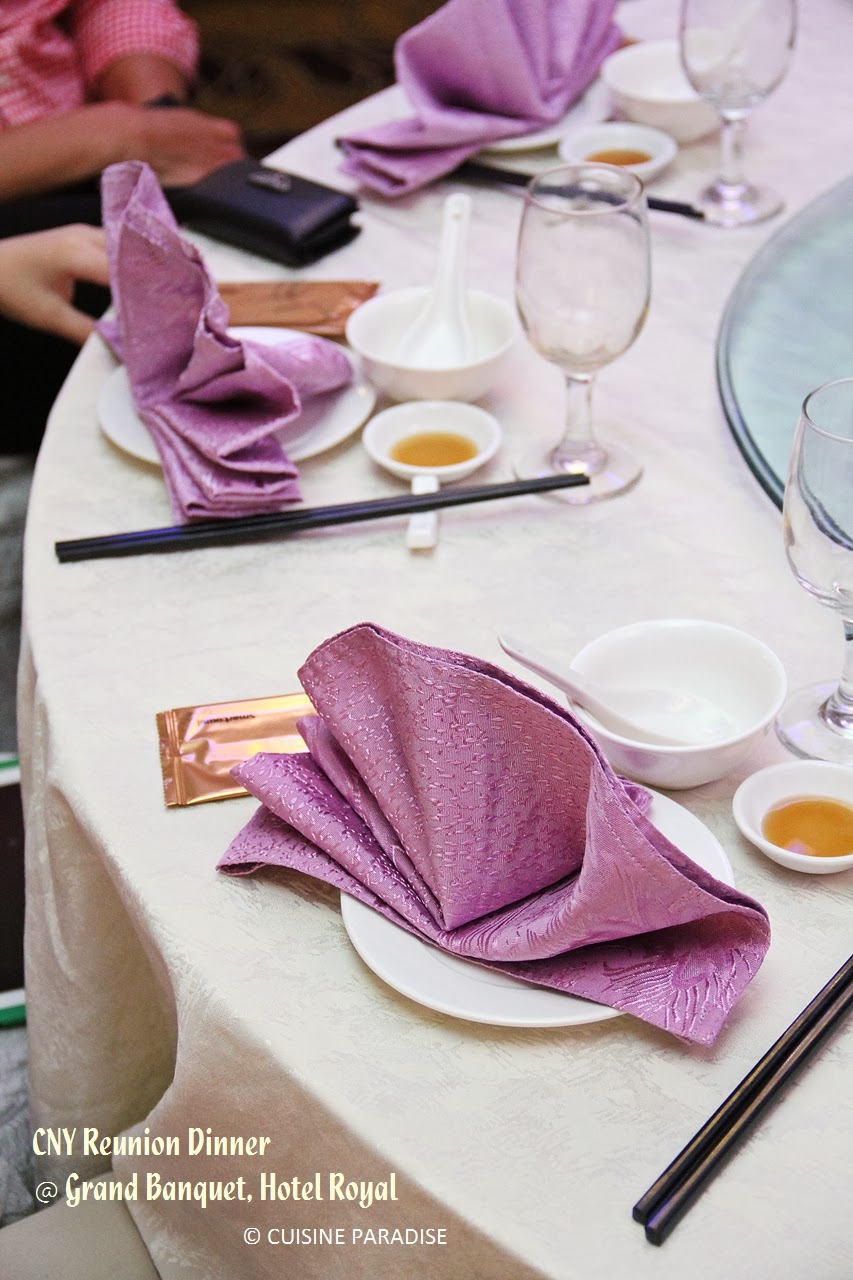 Overall the standard of the food at Grand Banquet was average and with the price that we paid for 10 pax at SG$888++ I find it was rather on the steep side. But as a one-time dining experience during festive season I guess it was still worth trying especially with their friendly serving staffs.