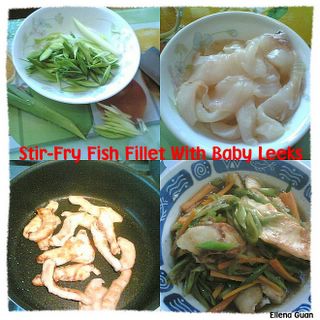 During Chinese New Year, almost every household will stock up "Baby Leek - "蒜" at home. Most people often used it cooking or hang it at some corner of the house to symbolized "年年有钱算". This is because "蒜" and "算" sounds similar in Mandarin so the more you eat, the more money you will able to count in the year. Here instead of using it to steamed fish, I recreate the recipe by stir-frying some fish fillet with leek which in a way easier for kid to consume.

Methods:
1. Season fish fillet with pepper, light soy sauce, sesame oil, cooking wine and cornflour, marinate it for at least 15 minutes.
2. Preheat frying pan with oil, pan-fry the prepared fish on both side until slightly browned. Remove and set aside.
3.Next add in leek and stir-fry until fragrant then add in the carrot and some cooking wine and continue to stir-fry for a few minutes till leek soften.
4. Toss in fish and seasoning then gently stir until well mixed. Remove and serve.
Posted By: Cuisine Paradise