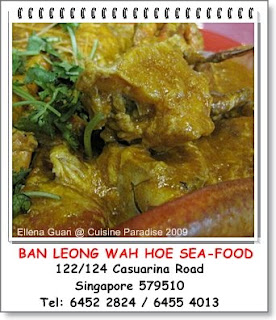 Ban Leong Wah Hoe Seafood Restaurant (万隆华和海鲜菜馆) is situated the residential area of Casuarina Road which is near the Upper Thomson Road. They served Great "Seafood Zhe Char" at an incredibly affordable prices. As this stall is extremely occupied during weekends, it is best to call ahead to reserved a table in order to save time on waiting. Other than dine-in, they also provided take-away orders on the phone too. 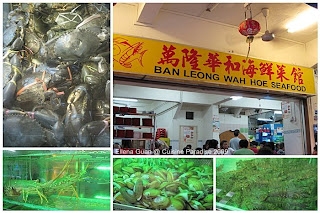 We arrived at about 7.10pm and almost all the tables were occupied and each of the tables will have at least one crab order which is either their signature Chilli Crab or whatsoever. While waiting for the food to be served, Rey and I went around the restaurant to take some shots on their seafood. 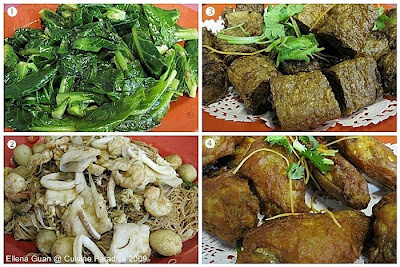 As we are celebrating Mum's Birthday with some friends and relatives, we ordered quite a number of dishes which a few of it I didn't managed to take a clear shot of them due to the poor lighting late in the evening as well as our table position. So I will just leave you with these 8 dishes:-

~ 1: Stir-fry Kai Lan which is not over cook and still remain crunchy and it comes with a special fragrant seems like pepper......

~ 3: Xia Zhao(虾枣) which is similar to Wu Xiang but is deep-fried in individual pieces consists of minced meat, prawn, yam, water chestnut and spices. The Xia Zhao here is rather crisp on the outer skin and it goes well with their special sweet dipping sauce. I prefer this more than the shrimp-paste fried chicken.

~ 4: Shrimp-paste Fried Chicken is seasoned with shrimp-paste and some other ingredients then coat with fry and deep-fried until crisp on the outer skin but still the inner meat is still tender and juicy. 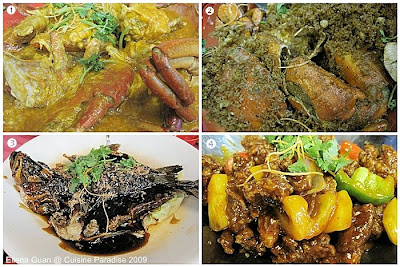 We ordered 3 crabs but cooked in two different methods which one is their signature Chilli Crab while the other one is in Butter flavour. Other than the crabs, we also have deep-fried fish with dark soy sauce, sweet and sour pork and hot-plate deer meat(铁板鹿肉).

~ 1. Signature Chili Crabs that served with gorgeous amount of egg sauce gravy and deep-fried mantou. As I am not a great fan of Crab, I only eat the mantou with the gravy. But overall, the taste is great.

~ 2. Butter Crab has a very unique fragrant and taste which covers with a thick layer of crispy fritters which I think is deep-fried egg. It has a very nice butter taste and most of us prefer this than the chilli crab.

~ 3. Deep-fried Fish cooked with dark soy sauce is rather salty on the sauce, but overall the fish is still fresh and not oily even though it had been deep-fried.

~ 4. Sweet & Sour Pork is one of my brother's favourite dish but then I find that their gravy is kind of sour. Maybe they have added too much plum sauce or tomato sauce.