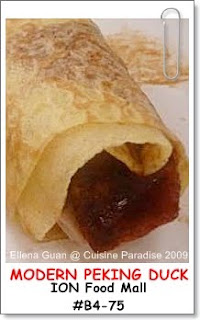 Peking Duck is always one of the most popular dish to be ordered in most of the Chinese Restaurant in Singapore. The dish is famous for it's thin, crispy skin, with authentic versions of the dish serving mostly the skin and little meat, sliced in front of the diners. It is often wrapped with egg crepes, spring onions, and hoisin sauce. But now instead of spending $60+ and above to have 10 over pieces of these Peking Duck parcels served in the restaurants. You can simply get a box of 5 pieces Peking Duck Parcels @ S$6.00 at the ION Basement 4, Food Mall. 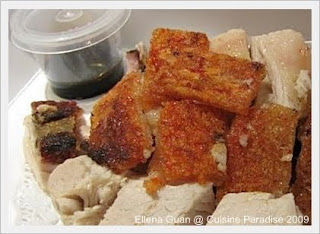 Other than the Peking Duck, they also has another Hot item call "The Big Pig" which is the roasted pig cost S$6.00 for 200g and it is served in a box with sweet dark sauce and chilli sauce. Although this is different from the Suckling Pig which taste much better, but it is still worth trying if you love those crispy and crunchy skin........ 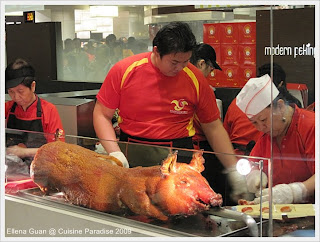 The store here at ION is owned by the "Toh Family", under the Yan Chuan Roaster brand name whom has been in the roast meats business for more than 30 years. From then news report, the branch can sell up to a maximum of 3 roasted pig a day since opening. Since we are early that day, we managed to capture a photo of the Whole Roasted Pig before being chopped into serving pieces........ 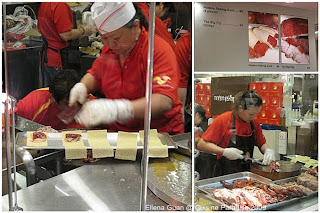 And since, it near to lunch hours, the kitchen stuffs are busying slices the Peking Duck skin and wrapped it with the egg crepes and brushed with hoisin sauce.