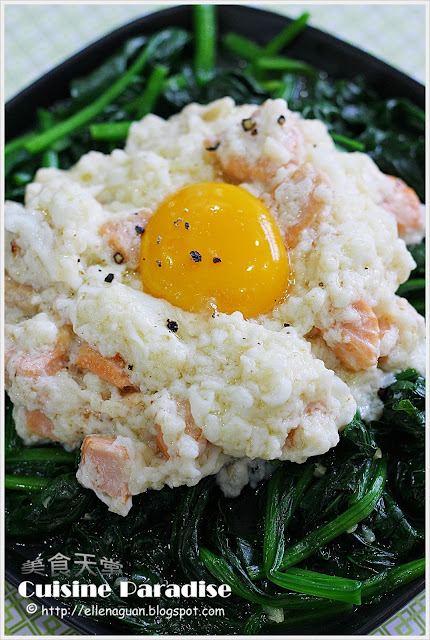 This stir-fried Egg Whites dish is also know as "芙蓉赛螃蟹" in Mandarin, which is a very popular dish in the Qing Dynasty. According to legend one day Empress Dowager Cixi suddenly want to eat crab but due to the long traveling journey to and from the ocean they could have get the crab in time to prepare this dish. So the chef has no choice but to use egg whites to imitate a similar “crab” dish for her. Surprisingly Empress Dowager loved this dish very much and it became a famous dish that is pass down till now.

My first experience with this dish is during my food tasting at Eastern Restaurant early this month. We have this dish called “Fu Rong Special Scramble Egg (芙蓉赛螃蟹)” which you might be interested to read more about it HERE. So after trying out this dish I am very excited to replicate it at home because I love its’ smooth and delicate texture that is great for both kids and folks. 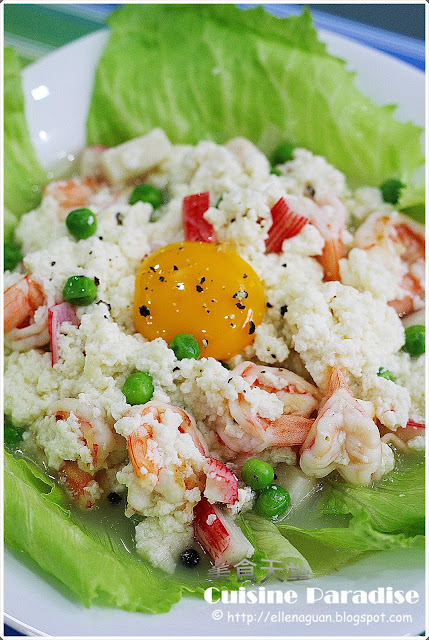 The first trial on this "Stir-fried Egg Whites with Shrimps" is not a total success as we find the overall dish a bit too wet and the texture of the egg whites seems to be overcooked. So after some run-through I think the problem might be due to the amount of liquid used (stock and fresh milk) or the size of the eggs. So after amendment to this recipe, I came out with another modify version using salmon and the end result is much better compared to this. You can take a look of the recipe below and compare the texture of these two versions, maybe you could come out something even better than my version. 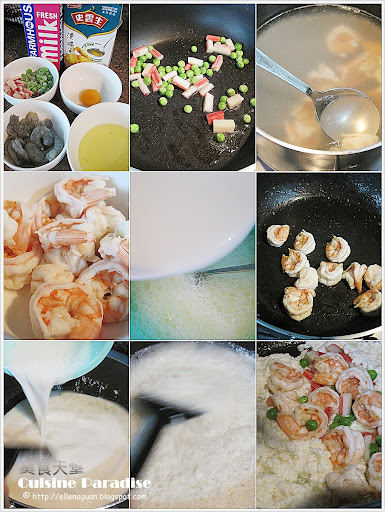 . The collage photos show the ingredients and steps on preparing this "Stir-fried Egg Whites with Shrimps":-

Method:
1. Bring a pot of water to boil, add in the shelled and deveined shrimps and cook it over medium heat for about 1 minute or so till the prawn turns pink and curl up. Remove and rinse them in cold water and set aside.
2. Preheat the wok with drizzle of oil then saute the crabstick and green peas for 1 minute and removed.
3. Now whisk the egg whites with a pair of chopsticks (for the 1st recipe I have actually over beat it foamy) for a few times then whisk in the fresh milk and chicken stock till well mixed.
4. Next rinse the wok and wipe it dry with kitchen paper towel and heat it up using 1½ tablespoon of oil.
5. Slowly pour in the egg whites mixture and stir using a spatula till the mixture became to bind together like a scramble egg texture. (this method with more water mixture will cause the egg to be more watery)
6. Lastly stir in the cooked shrimps, crabsticks and green peas and give it a quick stir before dishing it up and place on top of some lettuce leaves.
7. Arrange the raw egg yolk on top of the egg whites mixture and served hot. 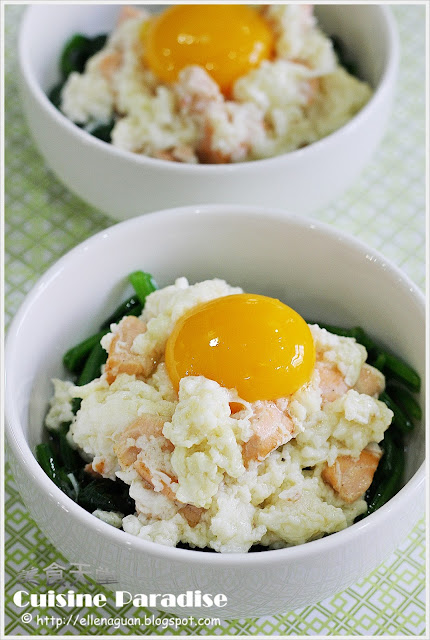 This is another similar version of the stir-fried scramble egg whites which is shown above. For this improved version, I used only 150ml of fresh milk and omit the chicken stock from the ingredient list. With some read up of different related recipes from the websites, I decide to try the method of not over whisking the egg whites in order to retain it’s shapes while cooking. Below are the ingredients for this “Stir-fried Egg Whites with Salmon Cubes”. 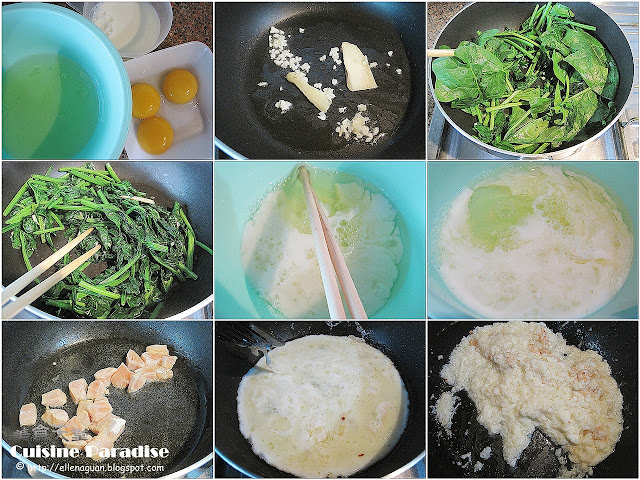 In order to bring in some colours and texture to this dish, I have added the stir-fried spinach at the bottom to serve it as a base for the egg whites mixture. Here are the steps to prepare this dish:-

Method:
1. Trim and cut the spinach into sections rinse it in a basin of water for at least 2 - 3 times to remove the dirt and soiled in it.
2. When done remove and drain well 5 minutes prior cooking time.
3. Preheat the wok with 1/2 tablespoon of oil; saute the minced garlic together with ginger slices till fragrant before adding it the drained spinach.
4. Give it a quick stir and continue to fry for about 1 minute or so until the leaves begin to wilt.
5. Lightly season it with some salt, remove arrange it in the middle of the serving plate.
6. Now lightly whisk the egg whites with a pair of chopsticks (do not over beat it until foamy) for a few times then slowly whisk in the fresh milk till well mixed.
6. Next rinse the wok and wipe it dry with kitchen paper towel before adding 1/2 tablespoon of oil to pan-fried the salmon cubes till slightly brown in colour, remove and set side to drain well.

Note:-
~ Remember not to over beat the egg whites mixture till foamy or else the scramble egg white will not form its' shape.
~ Before eating you have to mix in the raw egg yolk with the hot mixture and serve immediately.