A Day At The Universal Studios, Singapore plus Halloween Horror Night Preview 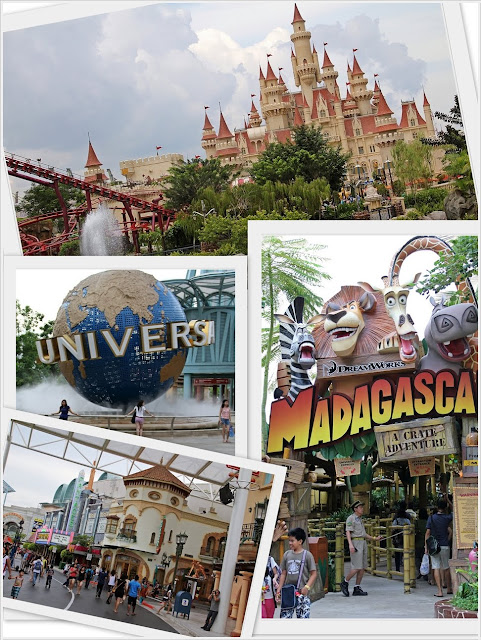 Universal Studios Singapore - 新加坡环球影城(USS) is a theme park located within Resorts World Sentosa on Sentosa Island. The park had its soft opening period from 18 March to 26 October 2011 and it's official Grand Opening was held earlier this year on 28 May 2011. For your information USS park contain 7 themed zones such as:- Hollywood, New York, Sci-Fi City, Ancient Egypt, The Lost World, Far Far Away and Madagascar all based on Universal movie hits and etc.

Since this week the lower primary are having a 4 day school break before the end year school exam I decided to bring my boy to USS as a study-break. He has being wanting to explore more and excited about those rides ever since our 1st visit last year during the After-Hour night visit(read more HERE). 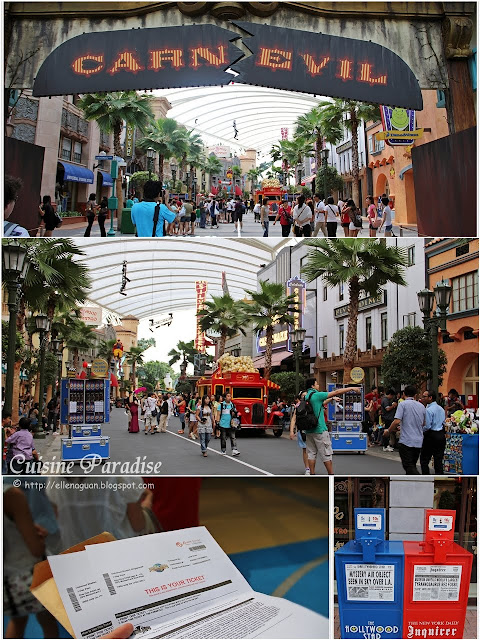 When you first step beyond the entrance of the USS, greeting you will be the grant "Hollywood" street framed by dynamic architecture, palm trees and the famous Walk of FameTM that makes you will feel as thought you have landed in the center of the entertainment universe. If you wish to grab hold of some souvenir before heading back, remember to drop by the "Universal Studios Store" along this street for some themed collectibles, toys and apparel.

You can use any MasterCard to purchase your admission tickets in order to enjoy 20% off One-Day tickets any day of the week when you book online or purchase on-site(After discount our weekday ticket rate: Adult: S$52.80, Kid: S$38.40)! On top of that you will also receive a S$10 retail voucher and etc. Promotion ends at 18 November 2011, more detail, HERE. 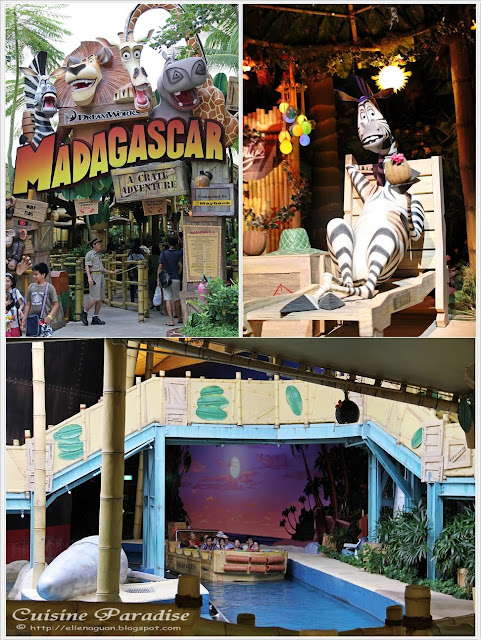 Our 1st stop is at Madagascar: A Crate Adventure where we get to board an indoor river boat ride with Alex, Marty, Melman and Gloria, the four heroes from blockbuster movie Madagascar. Very fun and relaxing boat ride which suits kid even for the age of 3 - 4 years old with accompany adult(s). 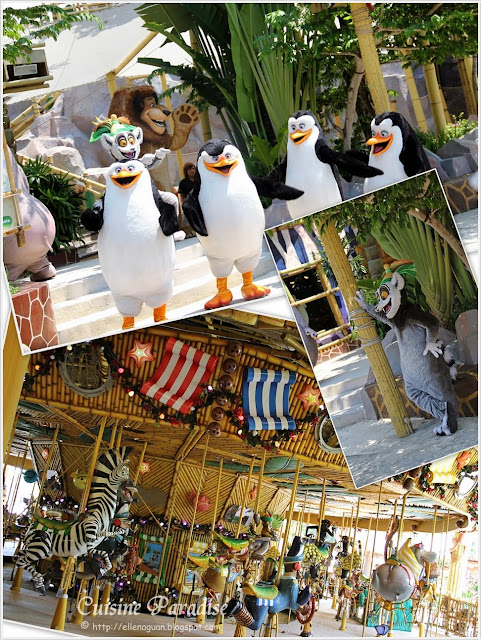 After the boat ride you can catch up with the Madagascar Boogie just outside Penguins Mercantile at specify showtimes such as:- 11.30am, 1.30pm, 3.30pm and 5.30pm.

At the same street in the Madagascar zone,  King Julien and the Lemurs are throwing a party for their favorite freaks from New York: Alex the Lion, Marty the Zebra, Gloria the Hippo, and Melman the Giraffe at the all time family Carousel - King Julien's Beach Party-Go-Round. This is sure a catch for kids and adults of all ages where you can either ride and spins round and round with those cartoon characters. 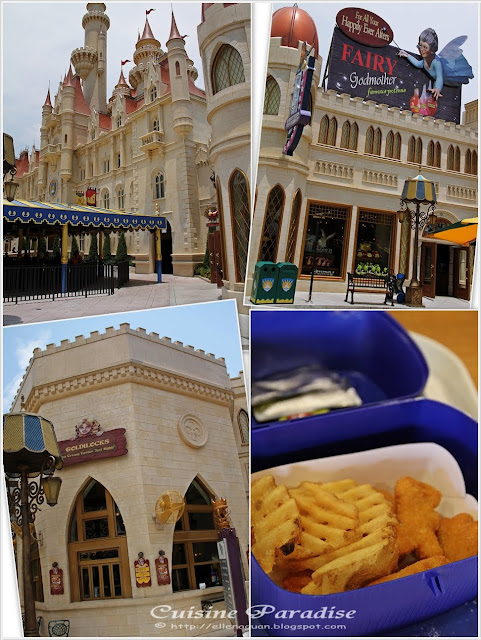 Movie stars, talking donkeys.…the land of Far Far Away showcases lifestyles of the rich and fairy taled whereby you will attracted by this unique castle which is the landmark of USS too. Here you can to enjoy Shred 4-D Adventure where you can see, hear and FEEL the action right from your seat such as water, hairy spiders, wind and etc. My boy and I have great fun and excitement watching this short movie.

Other than the delicious homemade recipe with 7-spice chicken at Goldilocks Restaurants (we had kiddy meal - criss-cross fries, dino nuggets and regular size drink S$9.50 serve in a cute portable lunchbox) you can also pop over to Fairy Godmother's Juice Bar to get some unique concoction of clourful elixirs at the juice bar. 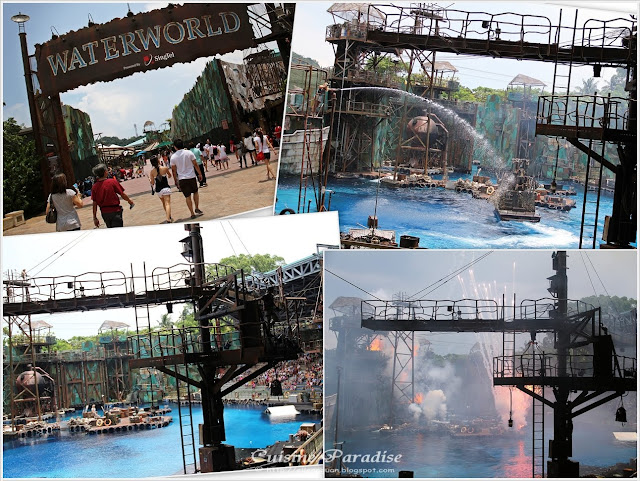 After lunch we move on to the next destination at "The Lost World" where we hurried ourselves to the 1.00pm showtime(showtimes: check the daily schedule for actual timing) at Water World. This is a must watch live entertaining show where we can witness a tidal wave of death-defying stunts, along with thrills and spills from real explosions of fire and water based on the blockbuster film, "Waterworld". But beware sitting at the center area or first few rows at the sides as you might get wet due to the splashing of water during the show. 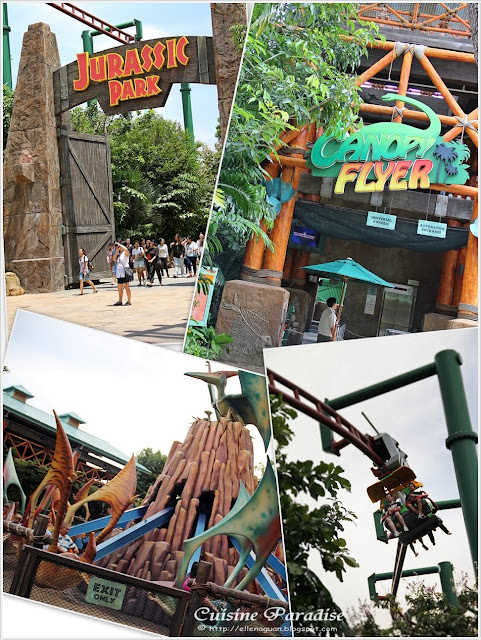 Currently the Jurassic Park Rapids Adventure is NOT available as it is undergoing enhancement works from 10 August 2011 early 2012. So with 1 attraction down we are left with Canopy Flyer, Dino-Soarin and Amber Rock Climb. My boy loves to ride on the Canopy Flyer whereby he is not afraid of height and turns but this ride leaving mummy with wobbly feet and butterfly stomach.

Dino-Soarin can be fun too as it attracted a lot of adults in all ages whereby you ride on the back of flying dinosaurs called Pteranodons, soaring up into the sky or plunging down into the shadows. 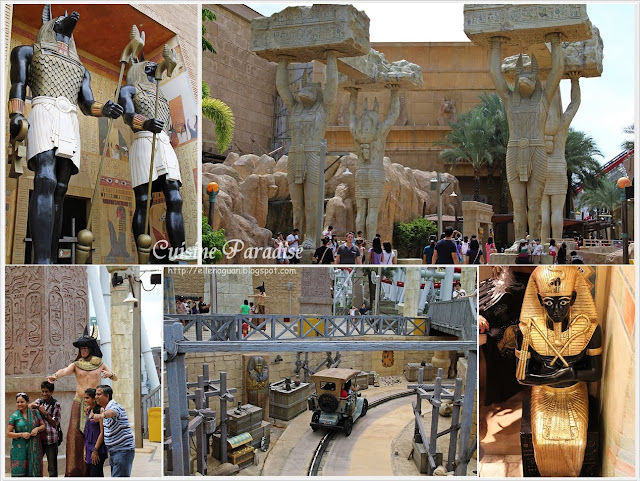 In order to skip the long queue over at Canopy Flyer at The Lost World, we thought of heading towards the Ancient Egypt Zone and take a look before popping by to join the queue. There are total of two rides focusing Revenge of the Mummy as the main attraction and Treasure Hunters on the other hand which is more child friendly ride for the family. The Revenge of the Mummy ride is a psychological thrill ride where the roller coaster travel through a pitch black building leaving you clueless as to where you are going and what is going to happen ahead.

After asking around and seeing the some photos taken at the photo booth from the rides, we decided to give this ride a pass and head on to the "Treasure Hunters" which is a relax jeep ride which is more suitable for us. Furthermore, each young kid will be presented with a Treasure Hunters License Certifies as souvenir too. 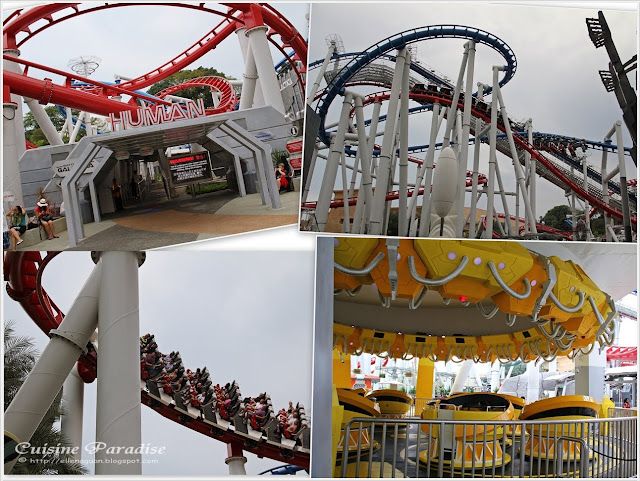 With a choice of either Human or Cylon at this Sci-Fi City riders on both coasters will experience unbelievable thrills as they race towards each other and nearly collide! Zooming at speeds of 82.8 km/h, the Human Viper Mark II is a seated coaster that propels riders up to 14 storeys into the air whereas they Cylon raiders is a suspended roller coaster that will turn your world upside down as it runs through a vertical loop, corkscrew and cobra roll. Imagine with all the turns and loops....this is definitely not my cup of tea. But are you brave enough to take the challenge!!!

Giving out on the roller coasters, my boy and I decided to test our intergalactic stamina while being madly spinning on the whirling twirling attraction known as Accelerator. These individual similar "merry-go-round" ride is so fun and thrilling leaving us screaming in excitement through out the ride. 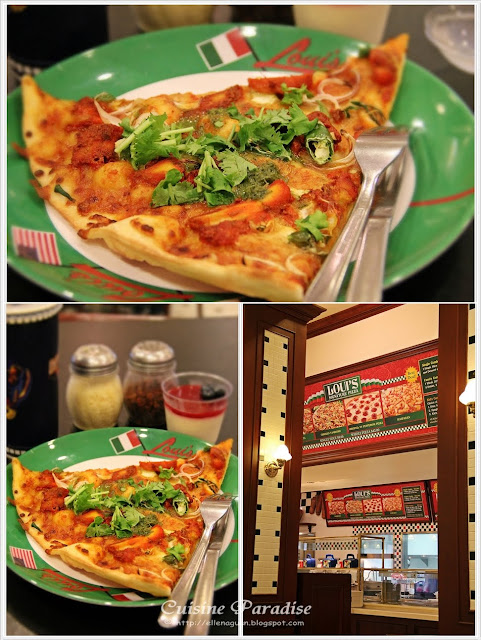 At about 4pm we are already hungry from our earlier lunch-break over at Goldilocks Restaurant mentioned above. So we decided to stop by the recommended Loui's NY Pizza Parlor to have a quick bite. As it was very pretty late in the afternoon there aren't much choices left on the shelf. Here we grab the "1 Slice Pizza Set" which comes with 1 slice of your desire pizza(i choose Tandoori), 1 dessert(either Panna cotta or Cheesecake) together with a cup of regular size soft drink at S$13.80.

As you can see the slice of pizza was quite big which is about the serving of 2 normal slices of pizza that we used to have. I love the thin and crusty base with topped with tender and flavorsome tandoori chicken, green chilli and well-blend seasonings. Worth trying this set especially with a cup of yummy Panna Cotta as dessert before heading to our show over at the opposite street at "Lights, Camera, Action!" where we get to witness the stage setting with awesome sound effect on a major hurricane hitting New York City. 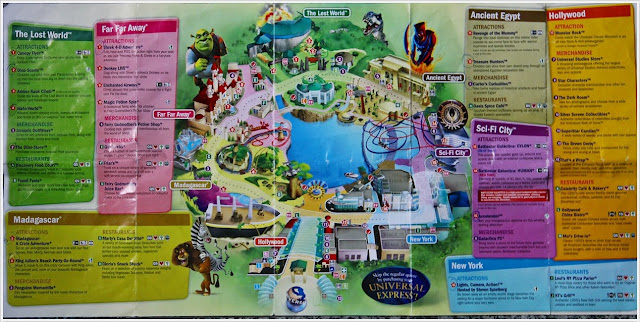 After a fun-filled day at the theme park, here is the crumbled map with marking on all the attractions that we have survive through. Friendly speaking other than the "roller coasters" I guess most of the attractions are still very family oriental where most of the family members can participate with. 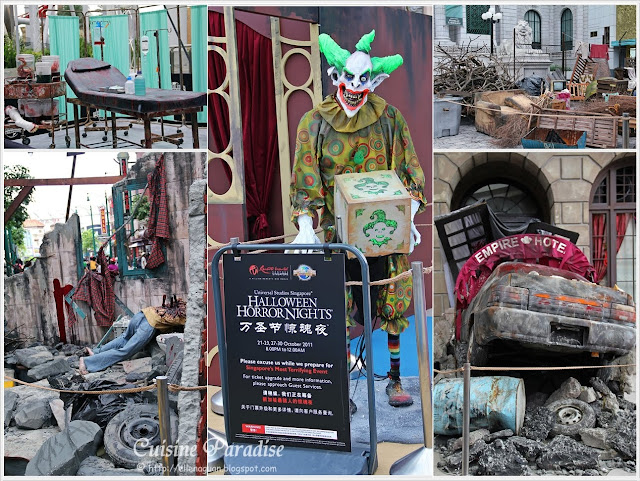 This October if you are looking for some terrified event for your Halloween Night, do consider joining this 1st Halloween Horror Nights in Universal Studios Singapore, Resort World Sentosa(Date: 21 - 23, 27-30 October 2011, Time: 8.00pm - 12 Midnight). These are some of the scenes from few of the 6 scare-zones that you will encountered during the event.

The highlights of this event are such as haunted Peranakan house to face the Vengeance of the Matriarch, Mutated zombies roam for blood in a Post-Apocalyptic Rage, Mad Scientist stalks unsuspecting victims in The Void and etc... More details of the event and ticketing information can be found HERE. Enjoy and have a fright night.

More photos of the USS trip can be found at HERE at Cuisine Paradise facebook page.