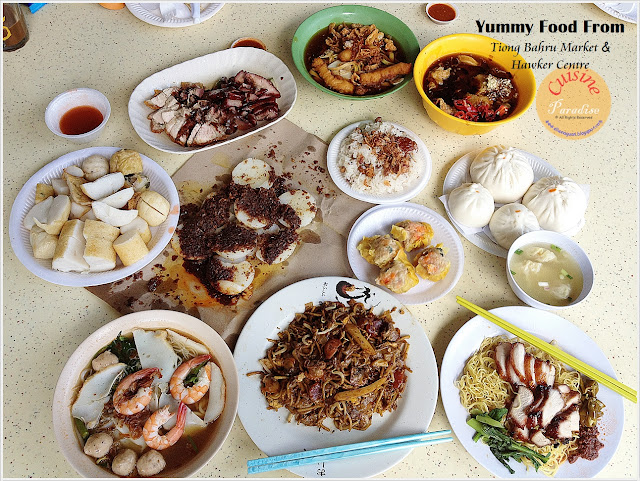 Once again we are back to our favourite "Hawker Food Trail" whereby Maureen (miss tam chiak) and Derrick (sgfoodonfoot) will organized a day where we get to feast all the yummy local hawker food at a specify Food Centre.

If you still remember this is our 3rd Hawker Trail, after the 1st at Old Airport Road and 2nd at Ghim Moh Food Centre. As usual we set up a budget of S$10.00 per person to conquer at least 10 different dishes. And for this round, we spent about S$9.00 on average with 10 dishes plus 2 desserts sharing among 6 persons per table. 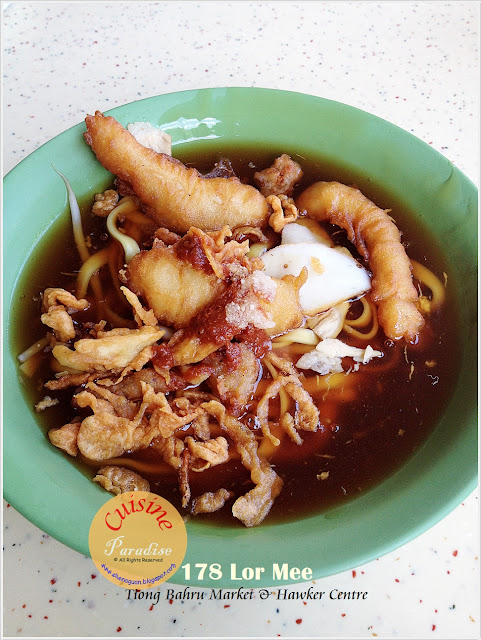 178 Lor Mee is one of the well-known stores in Tiong Bahru Food Centre. With their signature deep-fried "Shark Meat" in crispy batter that goes well with flat yellow noodles and thick gravy sauce has makes it something different from the usual Lor Mee with hard-boiled egg and ngoh hiang. 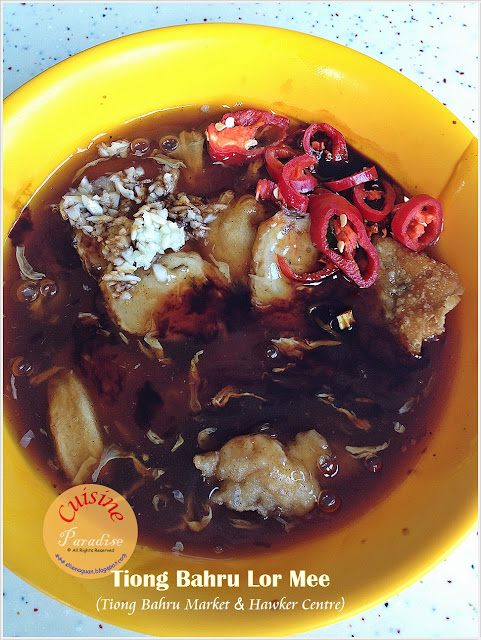 Tiong Bahru Lor Mee has it's own group of regular customers who prefer its traditional lor mee than the new one with "shark meat" from 178 Lor Mee. If to compare both, most of those seated on our table prefer this traditional Lor Mee with ngoh hiang, fish cake, braised meat, braised egg, fried dumpling and etc which makes it a hearty bowl of noodles. 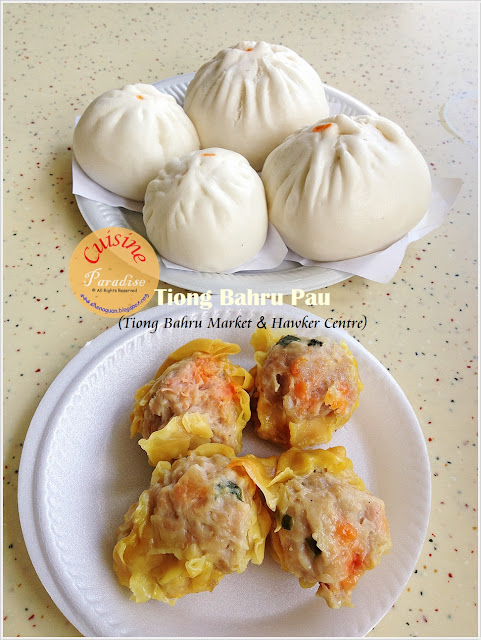 Previously whenever we comes to Tiong Bahru Food Center, we always bought back some steamed buns and egg tarts from "Tiong Bahru Pau" for supper or breakfast. Despite the fact that their "dao bao" does not come with slice of "hard-boiled" egg like others but the flavour of the meat and texture of the bun skin are good enough to cover the missing "egg". But recently the texture of their bun is not as good as it used to be. 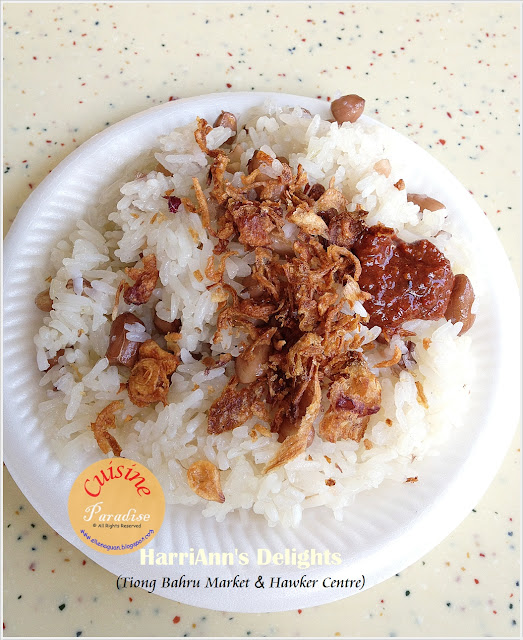 Surprisingly the this plain looking vegetarian glutinous rice taste good from HarriAnn's Delights. This is recommended by one of the group member, Yan Cai who love their glutinous rice. But since it is vegetarian I guess we can't expect much on their chilli sauce which seems to lack of certain ingredients and flavour when compared to those non-vegetarian. 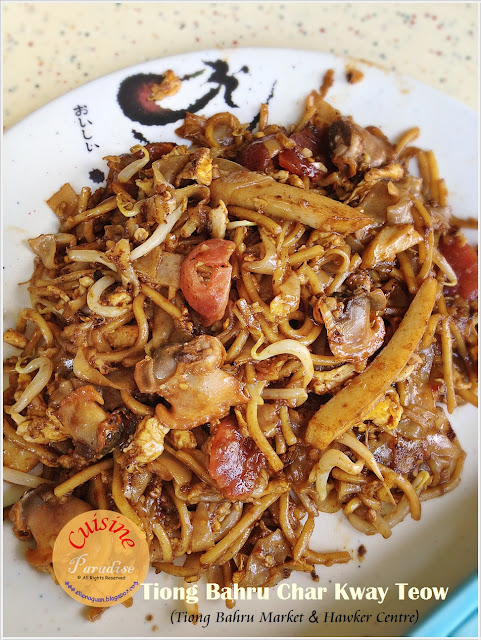 Tiong Bahru Char Kway Teow here seems to be drier and did not feel and taste as oily as it looked. The S$4.00 portion that we ordered included things like Lup Cheong, Sliced Fishcakes, Bean Sprouts and Cockles as well as "pork lard". If you like Char Kway Teow perhaps you would also like to try the famous stall, Lao Fu Zi Char Kway Teow which located at Old Airport Road too! 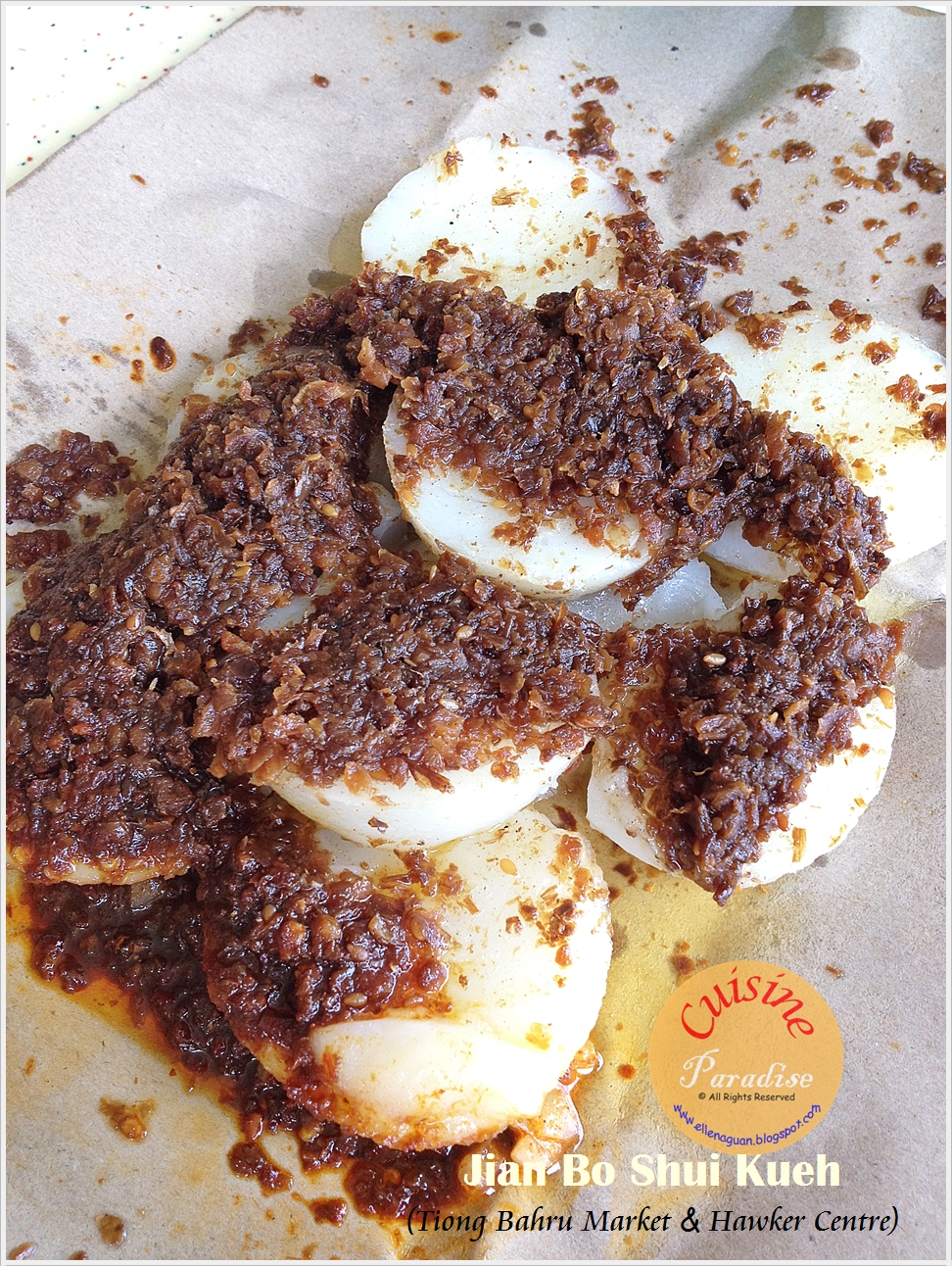 When compared to the well-known Bedok Chwee Kueh, this old time favourite, Jian Bo Shui Kueh which located at Tiong Bahru has it's own unique taste too. I love taste and fragrant of their chye poh which might be slightly salty but it did blend well with the plain chwee kueh which brings up it's flavour. Overall this is still quiet a good choice for either breakfast or tea-break despite of those "oil" flooding around. 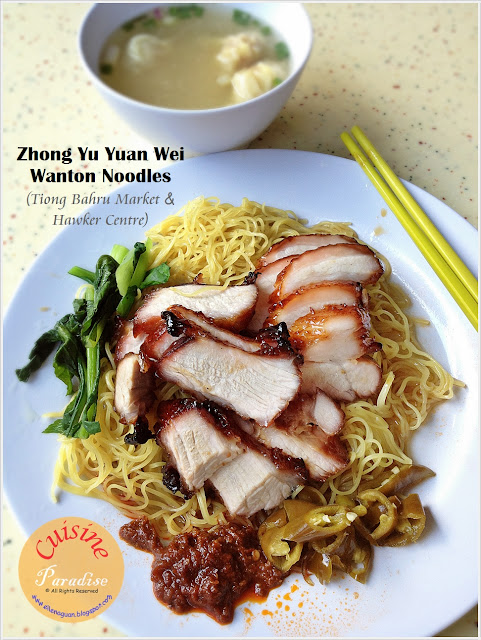 Zhong Yu Yuan Wei Wanton Noodles is one of the famous wanton noodles stall out of two in Tiong Bahru food center. Their Char Siew noodles is famous on using the the 不见天 (never see sky) or aka armpit meat of pigs to make their char siew. And each plate of wanton noodle comes with springy yellow noodles, top with slices of incredibly tender, well marbled and glazed char siew. No wonder customers are willing to queue for at least 20 minutes for a plate of delicious wanton noodle like this. 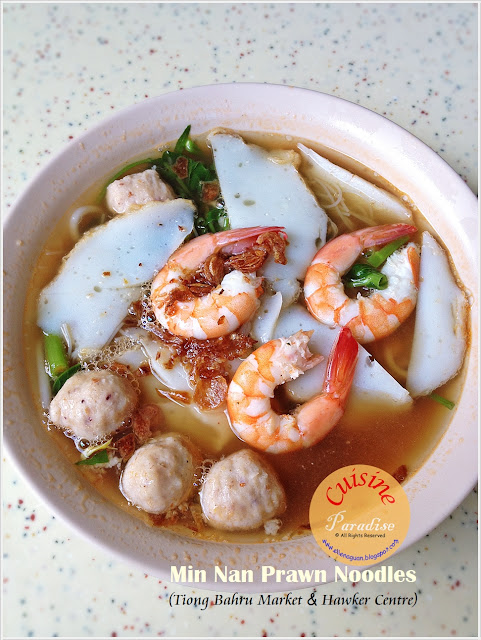 When the prawn noodles arrive on the table, I was quiet shock to see something usual such as meatballs appeared in it. Mum said she always request the stall owner to do away the meatballs as she is not a fan of it. Overall I find the taste of the prawn broth is on the lighter side which could be improved with a strong prawn flavour will be better. 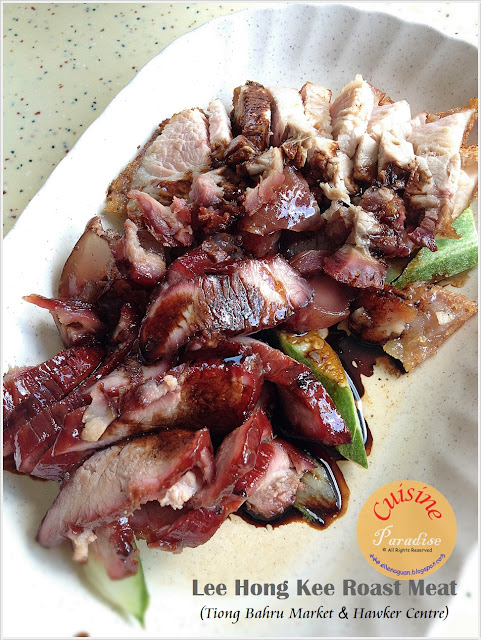 Lee Hong Kee Roast Meat has being around at Tiong Bahru for many forty years or more and their price is quiet reasonable with the amount of meat you paid for. Their char siew is cut thickly which offers a very satisfying bite which most of us love. The plate that we had above consists of roasted pork, char siew and lup cheong (Chinese Sausage). Personally I love the taste and fragrant of their lup cheong which i think it would goes well with a plate of plain steamed rice or even best to be added into claypot rice. 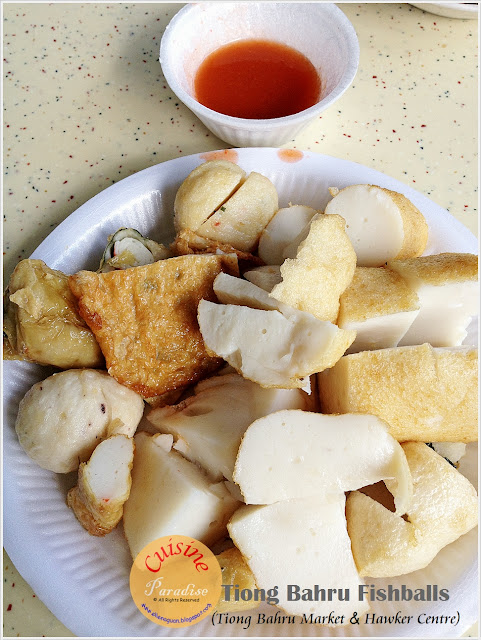 Although I don't really like fishballs with soup or  noodles but I love those deep-fried fishballs; or fishcakes that are dipped with chilli sauce. Here at Tiong Bahru Fishballs, they have a few types of fishball and fishcake which taste quiet good with springy texture that is worth trying. But there is a little set back on their chilli sauce which can be improved as it is quiet dilute and the taste is slightly blend. 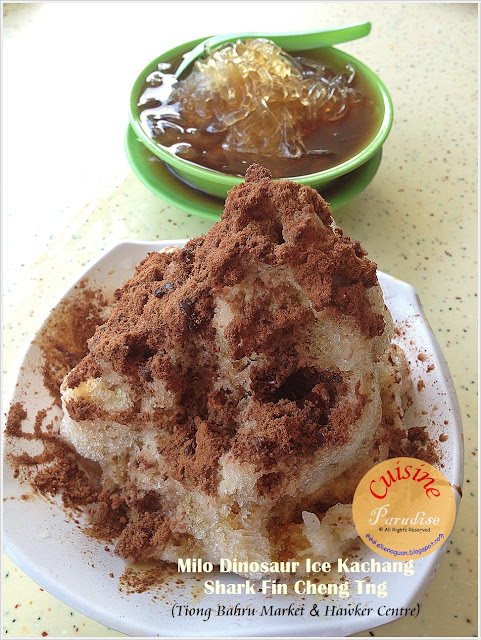 After meal we have some cooling dessert to clench our thirst from the afternoon heat. We tried two dessert from Liang Liang Garden which are the Milo Dinosaur Ice Kachang and Shark Fin Cheng Tng. 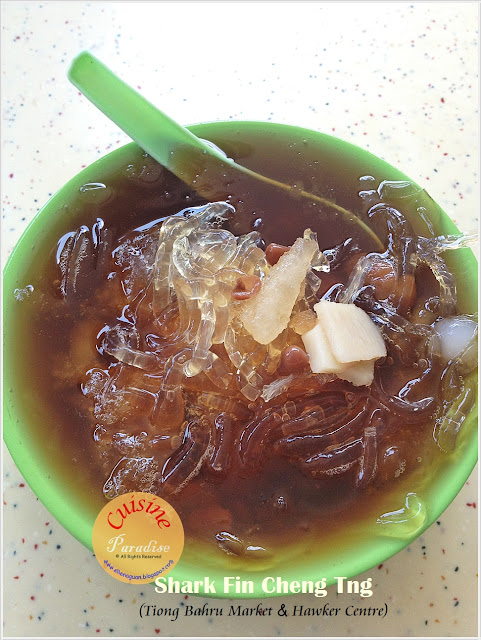 I love this Shark Fin Cheng Tng more than the other. It is so cooling and refreshing with bits of pieces ingredients such as red beans, water chestnuts, sago, dried longan and etc plus the shredded "shark fin" alike jelly toppings. Indeed this dessert is a good way to end a hearty meal.

Once again thanks Maureen and Derrick for organist this wonderful food outing. Look forward for the next one soon.