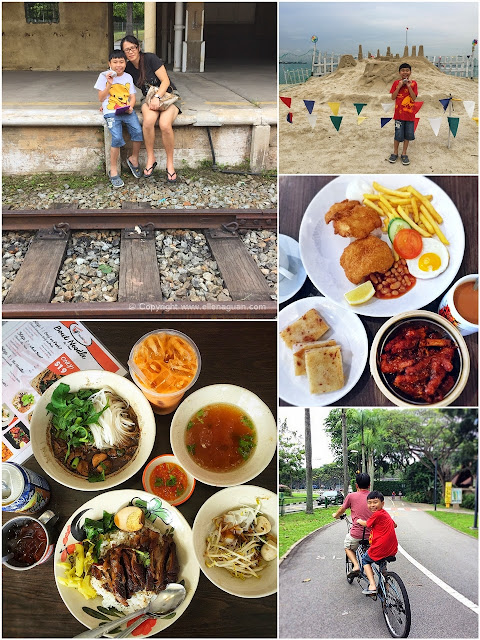 Time flies when another week had past without your notice. It seems like last Friday we had a wonderful Labour Day Holiday and now it's Friday again which is two day away before 10 May, Mother's Day. By the way, have you get ready your presents or plans to celebrate with your beloved mum. For us we had an earlier celebration in order to avoid the crowds so if you have time you can  read up some of the places that we went (National Museum, East Coast Park) and eateries (Thai boat noodles, Wee's Family Coffee Shop) that we tried over the long holiday weekend.


Even though last Friday was a public holiday, the boy still woke up early and followed me to the wet market to grab some ingredients and breakfast. Above was one of his frequent stall whereby he could choose the type of fish and seafood to be included in coming week menu.

Bought some freshly made steamed bun from the 2 decent old dim sum stall in the food centre plus the boy favourite Malay curry puffs for breakfast. After which I did some quick laundry and ironing before heading out to OG Albert Complex to get the pair of "Converses Shoes" that my boy wanted.


Noodle House - Thai Boat Noodle
Saw a few Instagram posts recently on Thai Boat Noodle which makes me drooling over their authentic Thai noodles. So since we were in Bugis area, we decided to drop by one of the newly open branch by Noodle Cafe at Sim Lim Square which was recommended by Daniel Food Diary.

At Noodle Cafe, they have a simple menu with 5 easy steps to assist you in making your order from choosing ingredients to type of noodle, soup broth and etc. And besides serving  boat noodles the cafe also offers other special dishes such as braised duck or pork served with rice/noodles.


We ordered two bowls of boat noodle; Tom Yum (mini bowl @ SG$1.90) and Beef (upsized @ SG$5.00) by following the 5 easy steps on making order. Below is an example of our upsized beef noodle:

Surprisingly the soup broth is thick and flavoursome and it blends well with the springy glass noodle with the right amount of spiciness for our choice of "less spicy" option. Oh ya, I must admit their less spicy is already quite "heat up" for us so I am wondering how does their "normal" spicy level taste. On a side note, the beef was slightly too tough for my preference.

This is the small version of Tom Yum Boat Noodle which was packed with plenty of flavours from sweet, savoury, spicy and etc. Pretty interesting combination of taste with crunch of peanut bits in it too plus it was also my first time trying dry Tom Yum noodle.

Braised Pork Leg Rice (SG$6) which my boy love and finished almost 3/4 of the share. The braised pork was tender to bite and without any of those "poky" smell that turns you off plus the braise sauce was not too overpowering with the spices used. 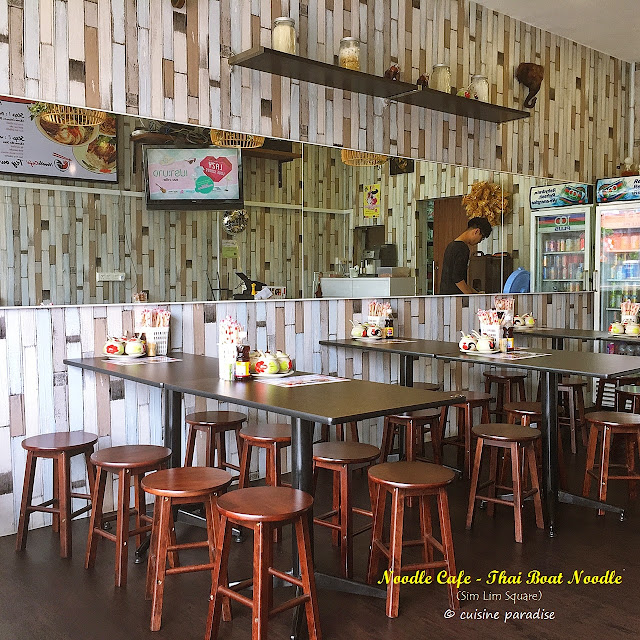 
In Memoriam: Lee Kuan Yew
After lunch we went over to the National Museum of Singapore to visit the "In Memoriam: Lee Kuan Yew Exhibition" who passed away on 23 March 2015. This exhibition is open to public from 25 March 2015 - 28 June 2015; 10am to 8pm daily. And the items on display include Mr Lee's red box (shown below) that he used as his briefcase and other personal belongings.

This red box was used by Mr Lee while he as in political office to contained his work such as speech drafts, letters, notes and etc.

Mr Lee's barrister wig (of horsehair) which he bought upon admission to the Bar. Other than the above, Mr Lee's Rolex Oyster Perpetual watch which was given to him by the Singapore Union of Postal and Telecommunications Workers on 11 April 1953 was on displayed too.


Tanjor Pagar Railway Station
The last stop of the day was at Tanjong Pagar railway station. This former railway station (already ceased operation since 30 June 2011) only opens to public visit during all public holiday from 9am onwards and till date you still see many visitors taking photos as memoriam.

Above shows an archive photo by your truly which was taken a few days before the closure of the railway station in June 2011. Likewise you could still see passengers rushing and alighting from train to the platform plus food stalls in operation too.

One pot dinner with chicken, Chinese sausage, mushrooms and chestnut makes a hassle free dinner on Labour Day.
A photo posted by Ellena Guan (@cuisineparadise) on May 1, 2015 at 3:30am PDT


East Coast Food Village
Initially we wanted to plan for a picnic at the beach on Saturday morning but since the boy woke up late we had a change of plan to go East Coast Park to have lunch and cycling instead. Talk about East Coast Park, I have not being to the hawker centre there for more than 10 years so we thought perhaps we could still find some yummy food just like years back.

We tried the Fried Hokkien Noodle with added Oyster (SG$6); taste wise quite bland without wok hei and prawn taste. Chicken Satay (SG$7.50 included the rice), satay itself could be better but the peanut sauce was good. Overall conclusion: the food standard was just average but the price was pretty costly as compared to other food centre like town or housing estate area.

The boy ordered Chicken Cutlet Rice (SG$4.50) with egg. The cutlet was good with tender meat and crispy outer skin that were not too oily plus the rice was fragrant with ginger and lemongrass taste.

After filling up our hungry tummy, we took a stroll along the beach to enjoy the cooling breeze and cold sea water since the weather was pretty good (slightly gloomy) for a walk. Look at my Ah boy (Instagram - @greenpiggy) who was jumping with joy and excitement when the waves came!

There were a few bicycle rental shops along the walkway. We picked up one that was nearest to the food village and went to rent two bicycles so that we could move around the park in a faster way. The basic rental fees was about SG$8 per bicycle for a single adult.

Oh ya, there was also some family type of bicycles which cater for 4 - 6 person which suitable for family with small kids 5 years and below (can put them on the front seat) that cost around SG$35 - SG$45 per hour. So expensive right. So not worth for us to get that!

This trip we move towards the left side of the park where the fishing jetty located and we saw many people waiting patiently for their catch despite of the weather.The boy even suggested that we could come for fishing during school holiday......

Very old school butter cream cake from ST Bakery at Haig Road (opposite the hawker centre). Had being looking for this strawberry flavoured cake for a long time.


XinWang Hong Kong Cafe
On Sunday, after church services I bought mum to Xin Wang Hong Kong Cafe (新旺香港茶餐厅) for an early Mother's Day Brunch. Looking through the menu we decided to get some dim sum and main dish to share among the three of us.

The boy gave a thumb up that their Fish and Chips (SG$10.90) was good with crispy breaded fillet that was not oily nor soggy when compared to some other eateries that he had eaten With ten dollars the serving portion was  quite generous with sides like chips, baked bean and a nice sunny-side up egg to go with the fillet..


When compared the two pork chop rice above, the meat from the Cheese Baked Rice (SG$11.90) tends to be a little tough to bite whereas the one below (pan-fry/grill) seems better with much tender bite and a nice brown sauce. Shall try their new menu on Hong Style dry noodle on the next visit.


Wee's Family Coffee Shop, Bedok Reservoir Road
Today schedule was much of food feast due to Mother's Day celebrations so after my boy finished his tuition class we went over to Bedok to pick up the in-laws for dinner. And instead of our usual dining venue at Jing Long Seafood Restaurant we decided to try the Cze Char at Wee's Family Coffee Shop which was recommended by MissTamChiak.


For a table of 5 pax (4 Adults + 1 Child) we ordered 4 small portion dishes which were; Salted Egg Pork Chop, Yam Ring, Claypot Tofu and Sambal Kang Kong with a total bill of S$42 including 5 plates of plain rice.

Love their tender fried pork chop that was evenly coated with a layer of  salted egg sauce making it so addictive that you could almost wipe the plate clean. The yam ring itself was fried till perfection with crispy outer skin that was not oily but the filling within can be much better with a little gravy to enhance the taste. Overall still a worth visit place if you are staying near that area. 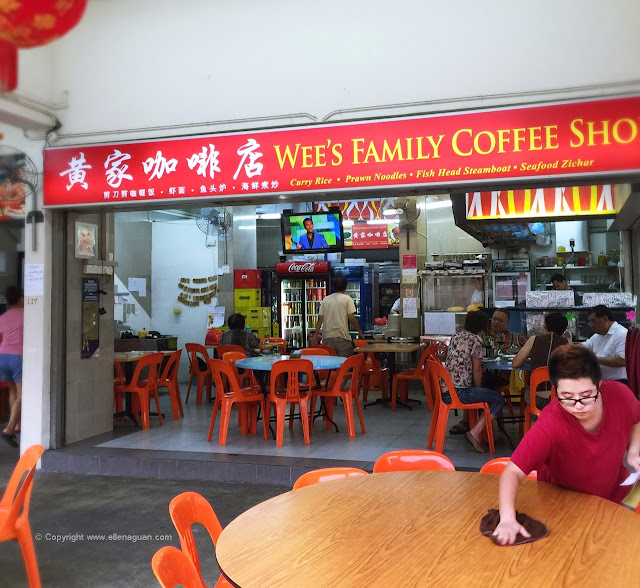 
Till then have a great weekend ahead and Happy Mother's Day to all mothers in the world!!!!
Posted By: Cuisine Paradise