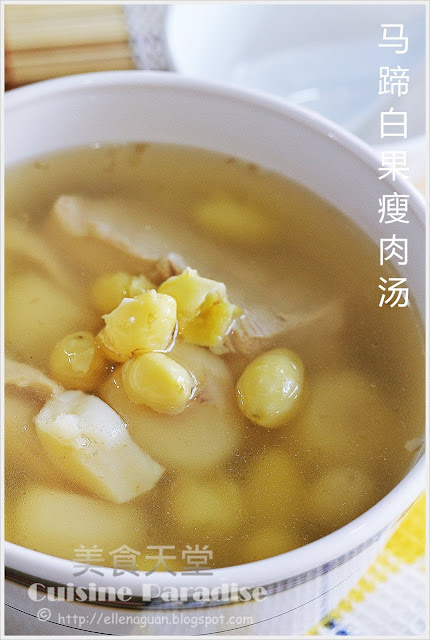 Saw this interesting Soup from one of the TV program known as "3 Plus 1 Sr 3(三菜一汤)" showing on every Wednesday, 8.00pm on Channel 8. Each week, 2 artistes from each group will be given a S$20.00 budget to whip up a 4 course (including a soup) nutritious meal for the family.

For this episode, I was captured by the quick and easy recipes which are being shared by Huang Wenyong and Xiang Yun. And I have tried out this interesting soup which is known as "Water Chestnut, Ginkgo and Lean Pork Soup (马蹄白果瘦肉汤)" together with their Grill Sesame Chicken Mid-Joints.(recipe HERE) 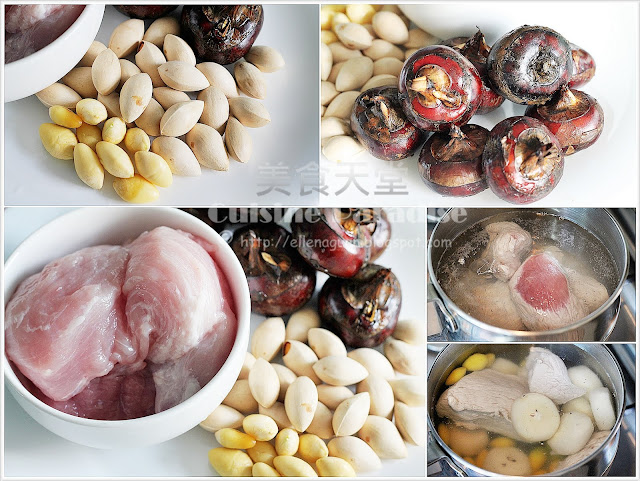 Note:-
~ Try to get hold of fresh water chestnut for this soup.
~ To avoid the bitterness taste of the ginkgo nut, cut it lengthwise apart and removed the embryo which can be found inside. 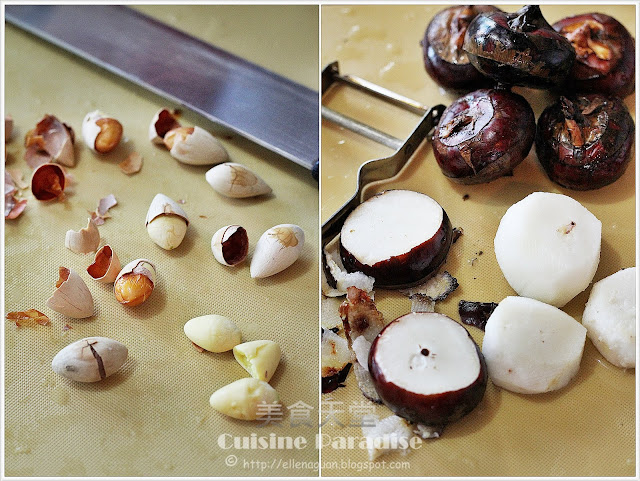 Gingko Nuts ( Bai Guo - 白果) are mostly beneficial to our respiratory system including asthma, bronchitis, and coughs. And I often use them in cooking soups, desserts, or even in porridge for added flavours. But remember not to over consumed Gingko nuts are it might have some harmful effect on human body especial for younger kids.

Water chestnuts(马蹄) are small, rounded corms with a crispy white flesh that can be eaten raw or use as sweetening ingredients for dessert or soup. Besides they can also be ground into a flour form used for making water chestnut cake, which is common dessert found in most dim sum menu too.


Method:
1. Use a nut cracker or back of the knife to crack open the ginkgo nut shell and remove the layer of brown skin from the flesh. Set aside.

2. Use 1/2 cup of hot water to soak the peeled ginkgo nut for about 5 minutes, rinse well with running water and set aside.

3. Scrub clean the fresh water chestnut and use a vegetable peel to remove the outer skin.

4. Soaked Tangerine peel in hot water till soft and scrub off the white pith before use or else the soup will taste bitter.

5. Blanched pork in boiling water for a few minutes, removed and rinse well.

6. Next bring a 1.8 litres of water to boil, add in all ingredients and when the mixture comes to boil, let it simmer over the stove for at least 1 hour on low heat OR

7. You can transfer the soup mixture to slow cooker and let it cook on AUTO for about 3 hours.

8. Season with salt and serve hot before meal. 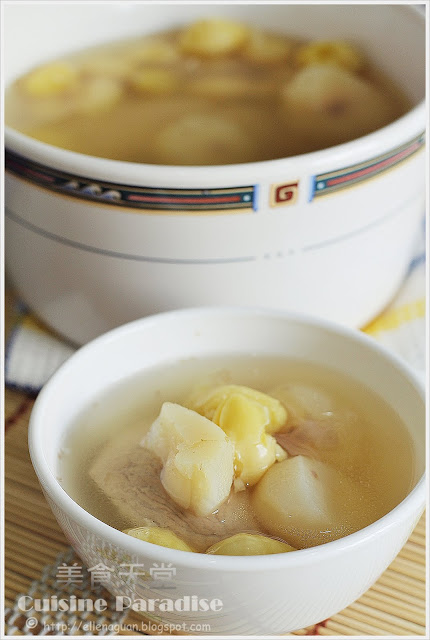 This soup is naturally infuse with the sweetness from the water chestnut together with hint of tangerine taste and unique aroma from the ginkgo nuts. Overall this can be rated as a clear and refreshing before meal soup which is very good for hot and humid summer days.

For those who has missed this episode or those who are keen to watch them preparing those yummy dish including this soup. You can refer to the website HERE.