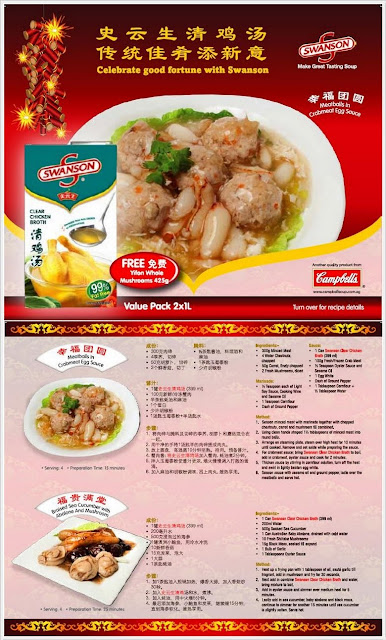 It's almost 2 weeks to Chinese New Year and having Steamed Boat with family and friends is always something most family would prepared during new year get together session. And sometime we even gets to eat steamed boat everyday during Chinese New Year period when hopping around from house to house visit.

This year I am honor to join in the project on developing FOUR quick and easy Chinese New Year dishes using these all-time family favourite chicken broth from Swanson. On the recipe cards we have Scallop with Wolfberries Soup, Steamed Dan Gui Prawn, Meatballs in Crabmeat Egg Sauce and Braised Sea Cucumber with Abalone And Mushroom. 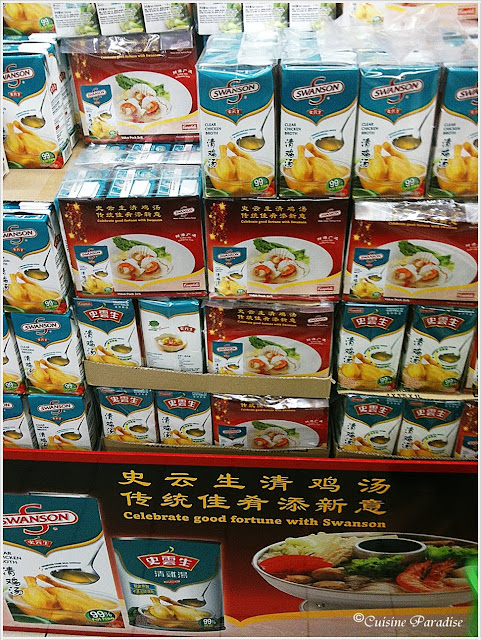 Currently Swanson Chicken Broth is having promotion pack at some of the supermarkets such as FairPrice where you could purchase the 3 packets(1 litre each) bundle at about S$8.50. Each bundle also comes with a recipe card featuring 2 quick and easy New Year dishes for you to impressive your guests. 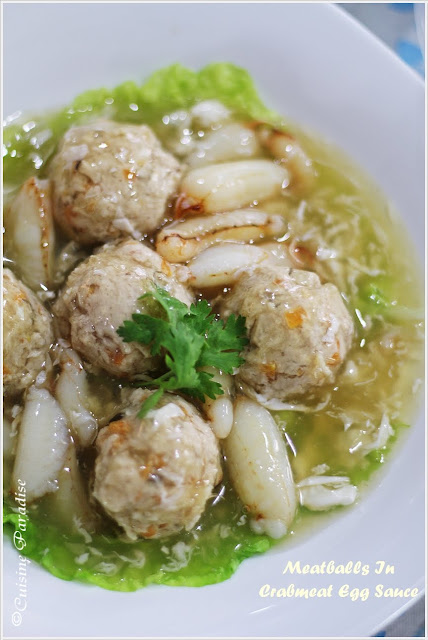 Here I would like to share with you this "Meatballs in Crabmeat Egg Sauce" from the FOUR featured dishes in the SWANSON Chicken Broth Chinese New Year recipes card. This is pretty simple to prepare and it is quite similar to the "Braised Lion Head - 红烧狮子头" concept on making meatballs which is cooked in delicious fresh crabmeat sauce. 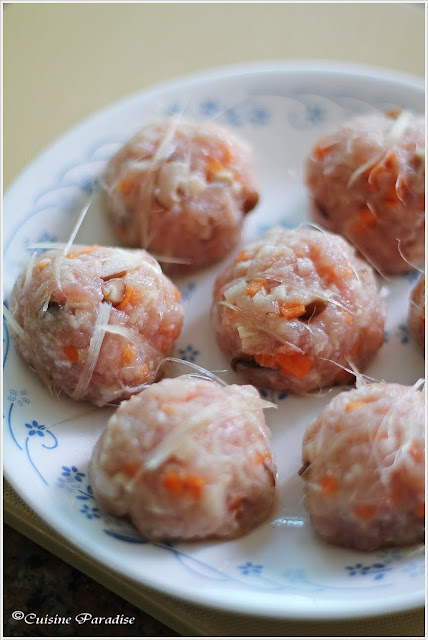 
Method:-
1. Season minced meat with marinade together with chopped chestnuts, carrot and mushroom till combined.

2. Using clean hands shaped 1½ tablespoons of minced meat into round balls and coats them with imitation shark’s fins.

3. Arrange on steaming plate, steam over high heat for 10 minutes until cooked. Remove and set aside while preparing the sauce.

5. Thicken sauce by stirring in cornflour solution, turn off the heat and swirl in lightly beaten egg white.

6. Season sauce with sesame oil and ground pepper, ladle over the meatballs and serve hot.


Below are some of the collections of my Chinese New Year round-up over the past years. Hope these could give you some inspiration while preparing the coming new year menu.

Till then have fun trying out these recipes and I hope I could be in time to share with you more new recipes on Chinese New Year theme soon.