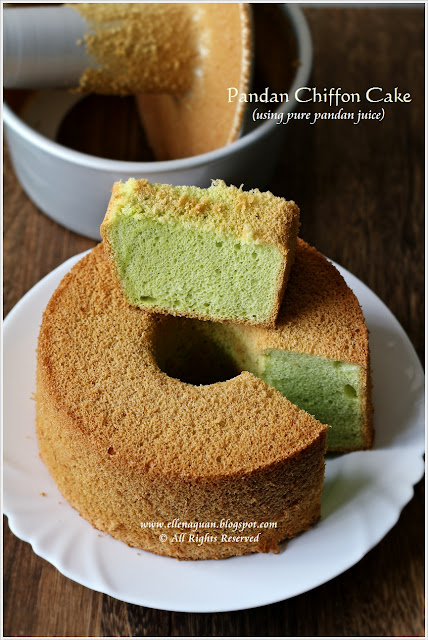 This is rather my "first post" on making a proper Pandan Chiffon Cake using tube pan (similar to an angel food cake pan) method rather than the previous two (recipes) I made using Happy Call Pan (HCP). Although the recipe is quiet similar but for this round I replaced the usual pandan paste /pandan juice with pandan flavour coconut milk (obtain by blending some fresh pandan leave and coconut milk together) which I have some leftover while making Pandan Kaya (recipe). 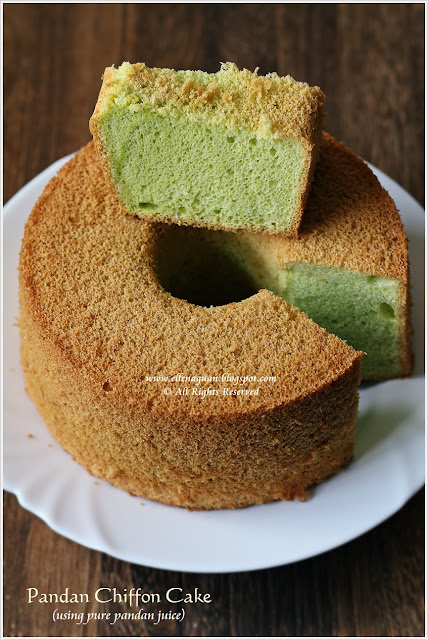 As you can see from the above photo, the texture of the chiffon cake is light and fluffy with a natural jade green colour from the fresh pandan juice.  When eaten it has a aromatic pandan fragrant which taste so much better when compared in using those commercial pandan paste or essence. So if you have small blender/chopper at home, do try taking this extra steps of 5 - 10 minutes blending some natural pandan juice for your pandan chiffon. And I assured you this would definitely worth the effort. 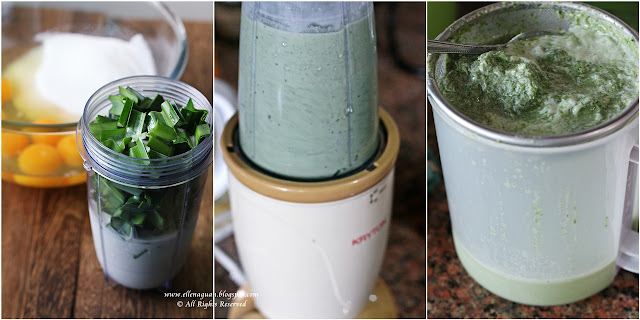 
Method:-
1. Whisk egg yolks and 25g sugar for 2 minutes till slightly pale in colour, stir in oil and pandan coconut milk in sequence until everything is well combined.

2. Next slowly whisk in the sieved flours mixture (cake flour with baking powder) into the egg mixture till no trace of flour is found.

4. Beat egg whites and 1/2 of the 60g caster sugar with an electric mixer until mixture becomes frothy and foamy.

5.Add in the other 1/2 of the sugar and continue to beat on medium speed until stiff peaks form. (the whole process takes less than 5 minutes and the egg whites remains in the bowl when it is over turn)

6. Using a balloon whisk carefully whisk in the stiff egg white into the egg yolk batter in 3 separate additions, with the 1st addition to incorporate the whites into the yolk mixture till combined leaving no trace of whites.

7. Next add in the 2nd and 3rd addition of whites using the balloon whisk in a gentle manner in order not to knock off the air in the whites, just fold till no trace of whites and the mixture are well combined.

8. Lastly lift up the bowl to height, pour the mixture into the tube pan and tap the pan once or twice on a table top to get rid of any trapped air bubbles in the batter.

9. Bake the cake in the preheated oven (2nd lower rack) for about 30 minutes or when the surfaces turns golden brown. (you can insert a skewer into the centre and test if it comes out clean)

10. Remove it from the oven and invert the pan immediately to let it rest on top of a cup. Make sure it cool completely before unmould.

11. To remove the cake from the pan, run a thin-bladed knife (i use a small plastic spatula) around the inside of the pan and the center core.

12. Release the cake and run the knife/spatula along the base of the pan to remove the cake. Cut into serving size and serve with a cup of tea or coffee.

Note:-
- The eggs used in this recipe is 55g each with shell.

- To obtain 100ml Pandan Coconut Milk:- blend 120ml of coconut milk with at least 8 leaves of pandan leave (cut into smaller pieces and add into the blender) and strained them to get pandan flavour coconut milk. 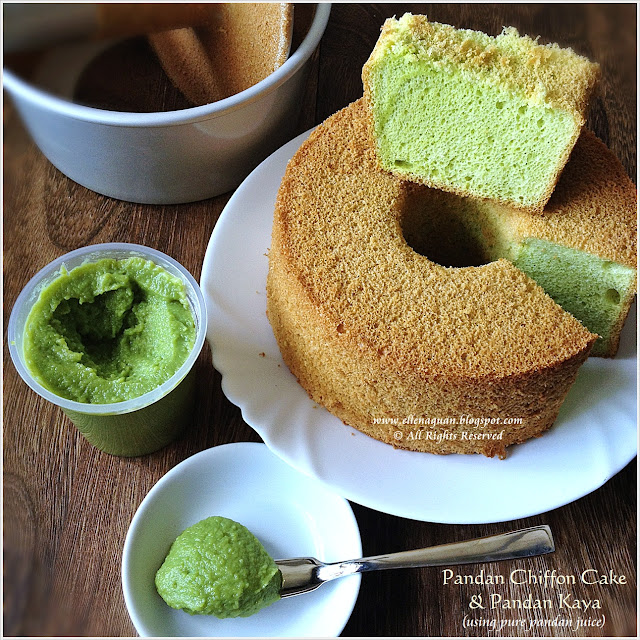 Other than baking the Pandan Chiffon Cake, I also made some Pandan Kaya using my new Joyoung Soymilk Maker (九阳豆浆机, read more here) which helps to cut down a lot of the tedious cooking and stirring time.  So stay tune for the recipe which can be used for either stove cooking, bread machine or soymilk maker that comes with the "jam" function.

Below are some Chiffon Cake Recipes for your interest.