No matter you are a new mother on confinement or just someone who wants to whip up some herbal dishes for the family to nourish the body.  I am sure you have tried some of those  pre-packed herbs, spices or even tonic drinks which are available in the stores. In this post I would be sharing a few ideas on how to prepare nourishing dishes with the help of Huiji Waist Tonic which could easily prepare for ourselves and kid(s) especially during exam period. 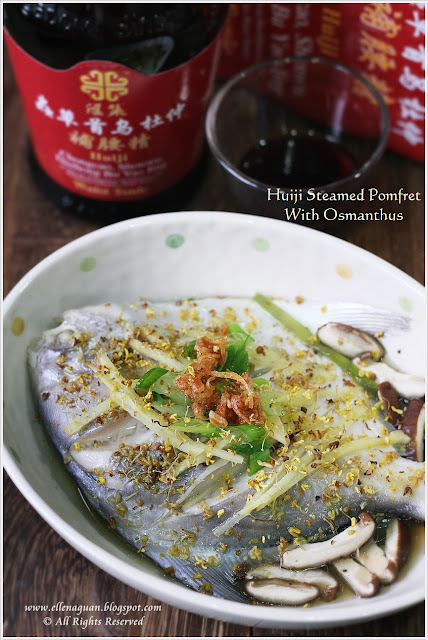 Silver Pomfret (Yin Chang - 银鲳鱼) or White Pomfret (白鲳鱼) is one of the seafood choice which is popular among the Teochew (a dialect group). And usually for a Teochew family like us, we love to include preserved salted vegetables, tomato and sour plums in our Steamed Silver Pomfret dish. But since I am re-create this dish for Chinese New Year, I decided to add in some Osmanthus flower which has a distinctive fragrance that enhance the flavour of this dish. 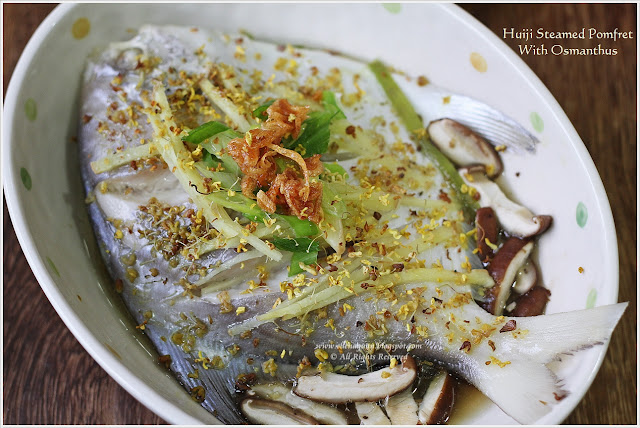 During Chinese New Year, it is a must have for each household to have "Fish" as one of the auspicious dish which symbol "abundance" of good luck and fortune. And when it comes to fish, the best way is to either Steam or Poach whereby using the most least ingredients to draw up the natural flavour and sweetness of the fish. 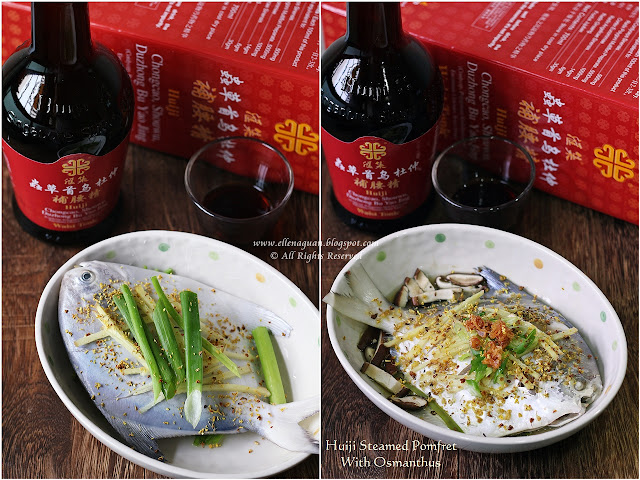 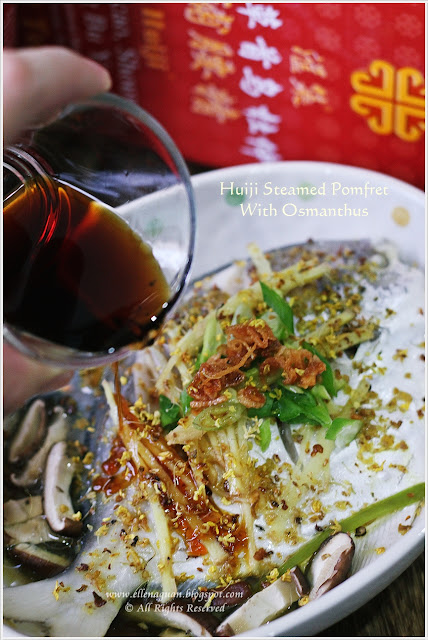 Method:-
1. Clean pomfret to remove any scales or intestines. Rub pomfret evenly with salt and marinate for 5 minutes.

2. Place pomfret on steaming plate that consists half portion of shredded ginger and spring onion.

3. Arrange remainder ginger, spring onion and mushroom on the fish before scatter the osmanthus flower on it.

4. Steam pomfret over high heat for 10 – 12 minutes. Remove from heat, garnish with shallot oil and drizzle a cup (20ml) of Huiji Waist Tonic on the fish and serve immediately. 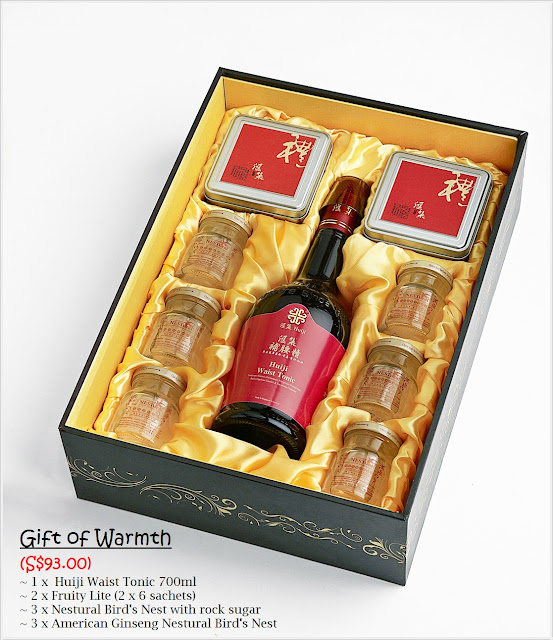 With my bottle of Huiji Waist Tonic that acts as a great helper in the kitchen, it definitely helps to boost up our health as well as enhance the flavour of the dish. For your information, Huiji Waist Tonic is now made in "Singapore" with a richer taste that filled with more goodness. And for Lunar New Year, you can pamper your loved one with either their festive gift sets such as Gifts of Thought (S$53.00), Gifts Of Warmth (S$93.00, shown above) or Huiji Waist Tonic and Fruity Lite Bundle Pack (S$42.80) which helps to bring them health and beauty.

Lastly I am submitting this post to Chinese New Year Delights 2013 hosted by Sonia aka Nasi Lemak Lover. 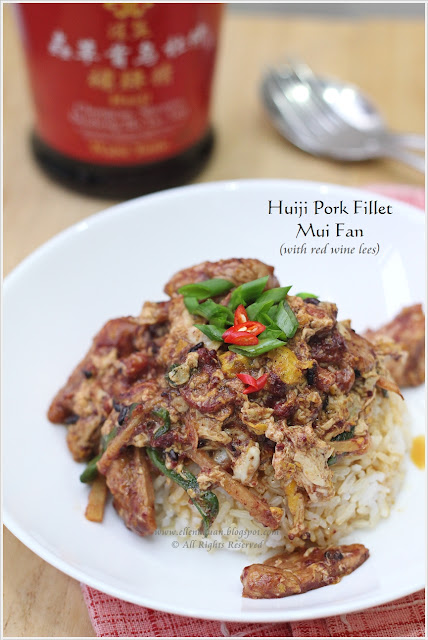 Mui Fan (烩饭) is one of my favourite childhood dish and even until now I still love this dish despite of whether homecook or store bought from the Cze Char stall(煮炒摊). You can easily create your own style of Mui Fan with different ingredients such as seafood, meat or vegetables. In this post, I would share with you a new version of my "herbal flavour" mui fan using Huiji Waist Tonic and Red Wine Lees. 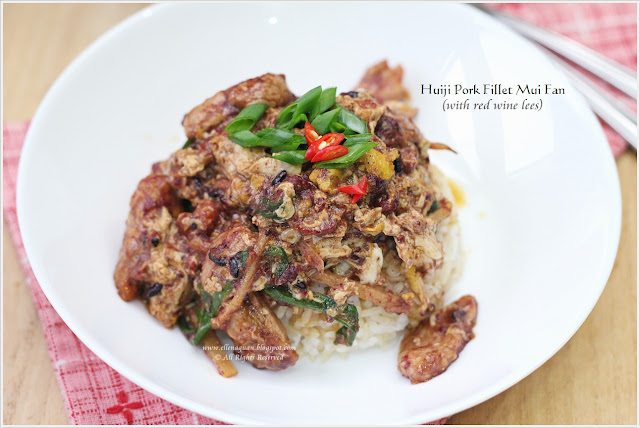 With a twist and inspiration from my usual mui fan, I decided to come out with something herbal and nourishing for the family. Also mui fan can be consider as a quick one dish meal which consists of cooked rice, meat, vegetables, egg(optional) and gravy in a plate. I love this type of comfort dish which is so easy to prepare and with less washing up to do too. 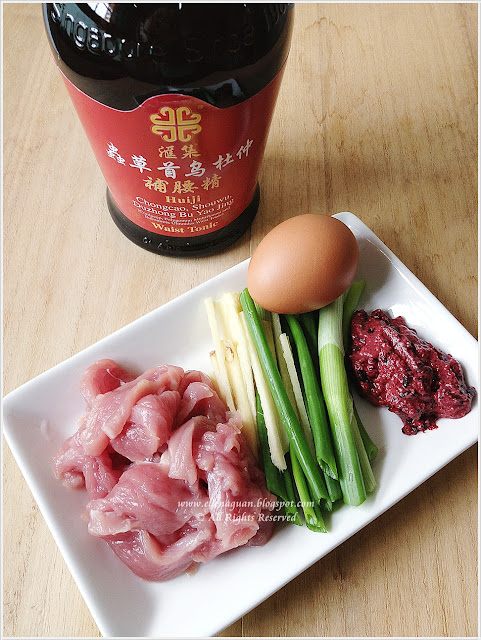 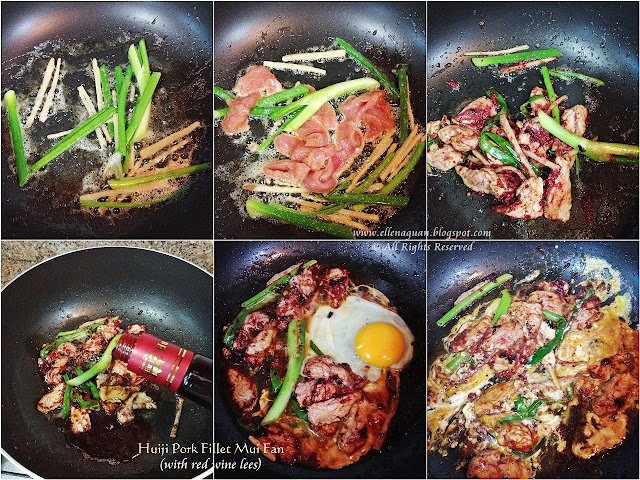 2. Stir in pork slices and cook 10 seconds, add in the red wine lees if using and continue to fry till meat is cooked.

3. Pour in 60ml Huiji Waist Tonic, crack in egg(s) and gently give the mixtures a few stirs. Simmer the mixture for 10 seconds.

4. Off the heat, season mixture with salt and pepper before spooning it on top of the cooked rice. 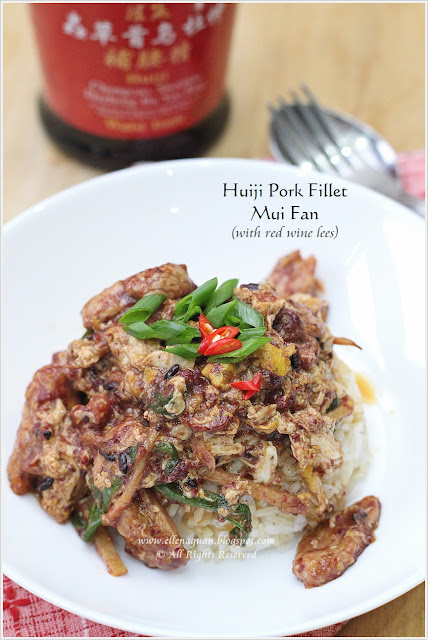 As for this dish, try to use either pork or chicken fillet so that the meat can be easily cooked and remains tender when bite. And also for those who like pork liver, you can add in some together with the pork fillet to create a better flavour and texture for this dish. 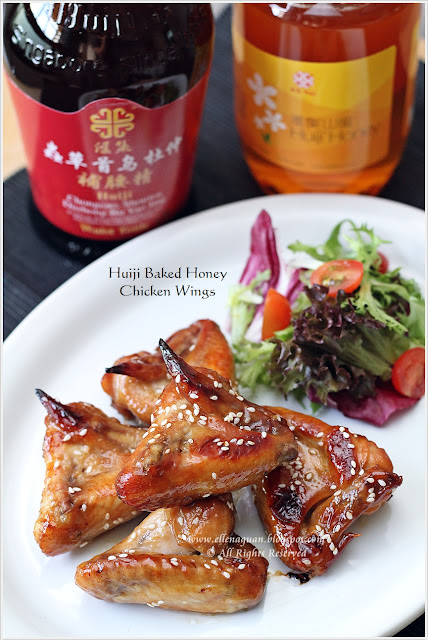 2013 is approaching within another 2 more days before 2012 ends and indeed this year I have another fruitful year with new recipes testing (Happy Call Pan, Korean Recipes, Joyoung Soymilk Maker, Zespri Kiwifruits and etc), family trips (Voyager Of The Seas, Tokyo (Japan) and Bangkok (Thailand)) and friends that I get to know through blogging and other social media platforms.

With another festive countdown gathering to celebrate 2013 I am sure finger food will be something handy for you to prepare or bring along as one of the potluck dishes. 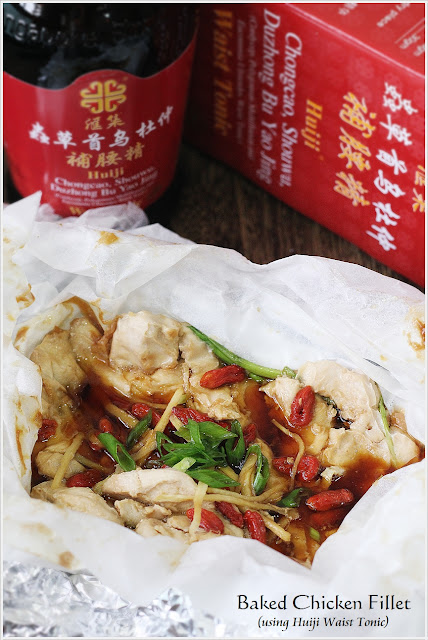 Steamed Herbal Chicken is always one of the most easiest dish to prepare because what you need is to assemble and wrapped the chicken with pre-packed Chinese Herbs (recipe 1) or Spices (recipe 2), STEAMED it for at least 45 minutes to an hour depending on the size and parts of the chicken used.

Here with a quick short-cut method, I replace the usual Chinese Herbs with Huiji Waist Tonic which served similar result and  herbal taste. 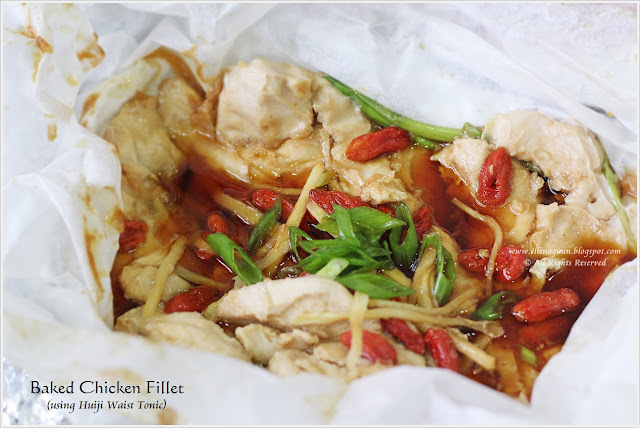 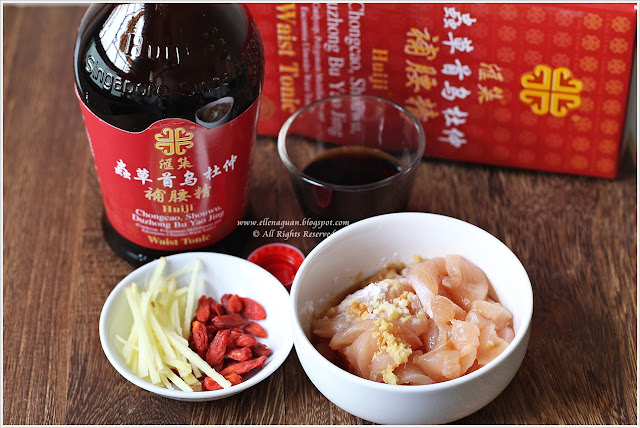 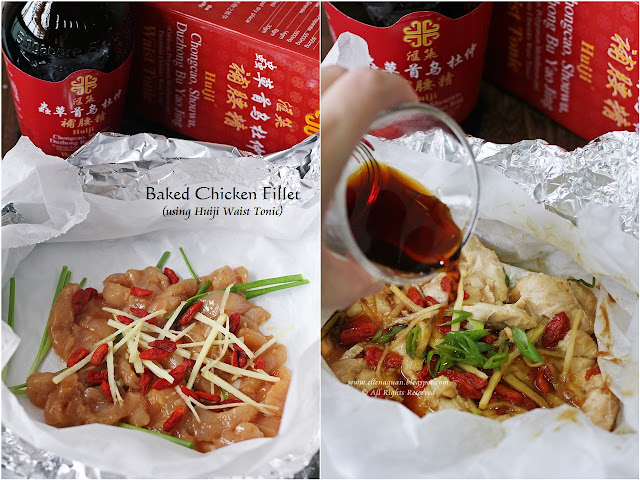 Method:-
1. Marinate the chicken fillet with marinade and set aside in the fridge for about 30 minutes or more.

2. Using a large piece of aluminum foil with another piece of baking paper on it. Place marinated chicken fillet, shredded ginger, spring onion and wolfberrie on the baking paper and wrapped foil tightly into a parcel.

3. Place foil parcel in a preheated oven at 200 °C (degree Celsius) and bake for 15 – 20 minutes or ALTERNATIVELY, steamed  it over boiling water for about 15 minutes. 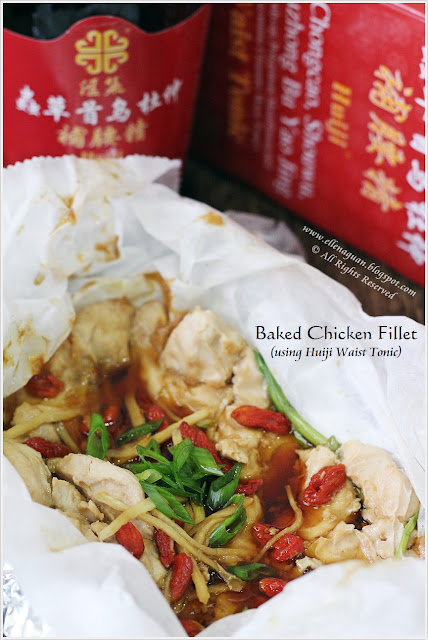 With a quick twist anything is possible to serve at the dining table and most importantly our family gets to eat healthy homecook food at our own comfort zone too. Also recently there is a facebook page known as  Cook For Family which you might be interested to join and share your daily cooking with the rest of the members too. 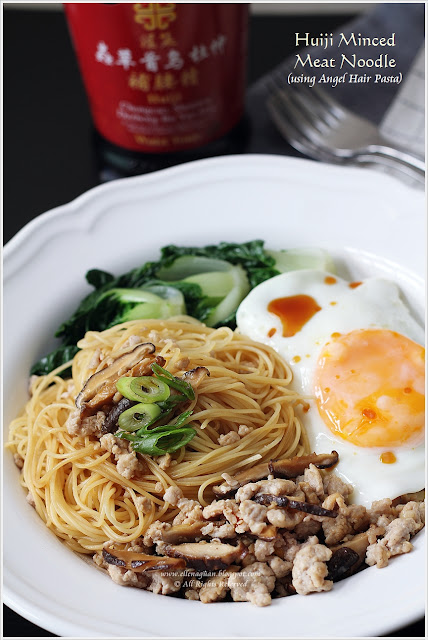 Minced Meat Noodle also known as "Bak Chor Mee (肉脞面)" is a popular local noodle dish which could be easily found at most food eateries in Singapore. Here I am sharing a version of our quick homemade Minced Meat Noodles which I have added some herbal taste to it. And this dish could also be consumed by woman who is doing confinement or anyone who wish to have a twist of herbal taste from their usual noodle. 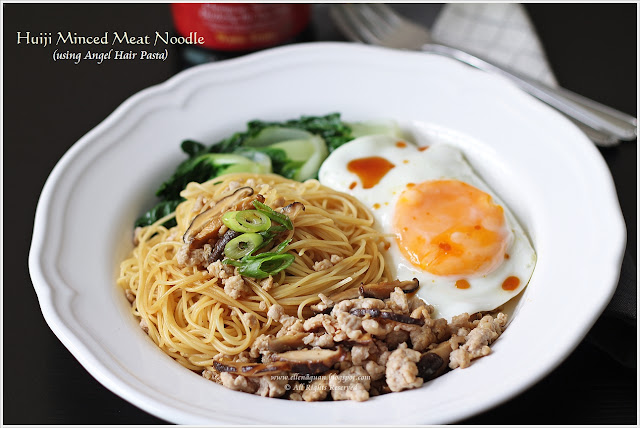 Our minced meat noodle is made with Angel Hair Pasta instead of those handmade egg noodles which are commonly found at the noodle stalls. And for a fusion taste, I used angel hair pasta which cooks faster and yet with a similar springy texture when compared to the fresh egg noodles. To flavour the taste of the noodles I also add in some Huiji Waist Tonic to act as seasoning instead of using oyster sauce or chilli/tomato sauce. 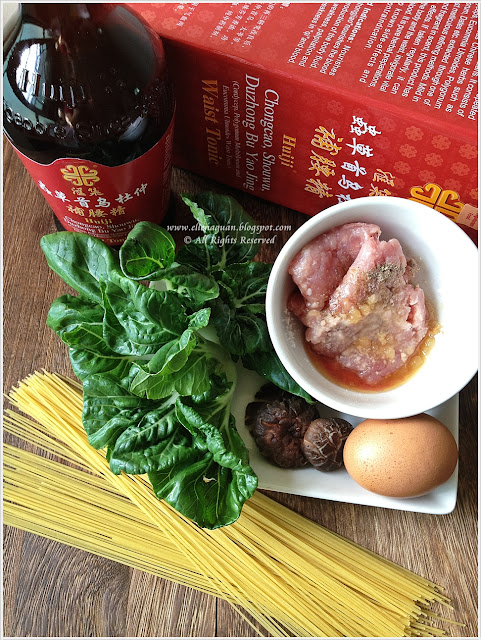 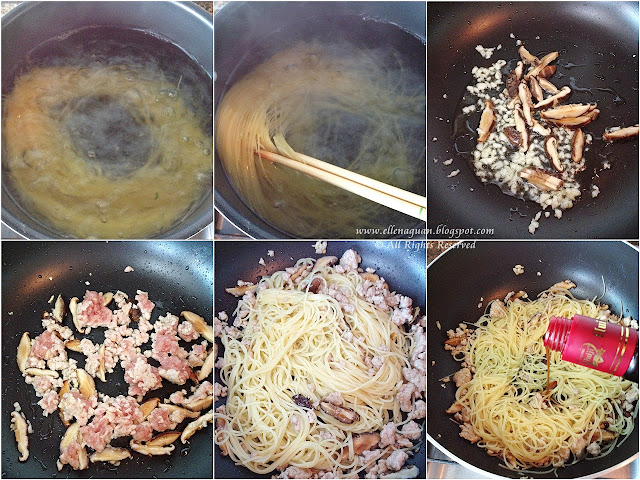 Method:-
1. Marinate the minced meat with marinade and set aside. Blanch bok choy with boiling water for 10 – 15 seconds. Remove, rinse with water and set aside to drain.

3. Preheat frying pan with 1 tablespoon of cooking oil, sauté garlic till fragrant, add in shiitake mushrooms and fry for 30 seconds.

4. Stir in minced meat, fry till fragrant and cook through by using spatula to loosen up the meat cluster, if any.

5. Lastly add in pasta, give it a quick toss, drizzle in 40ml Huiji Waist Tonic and stir till combined 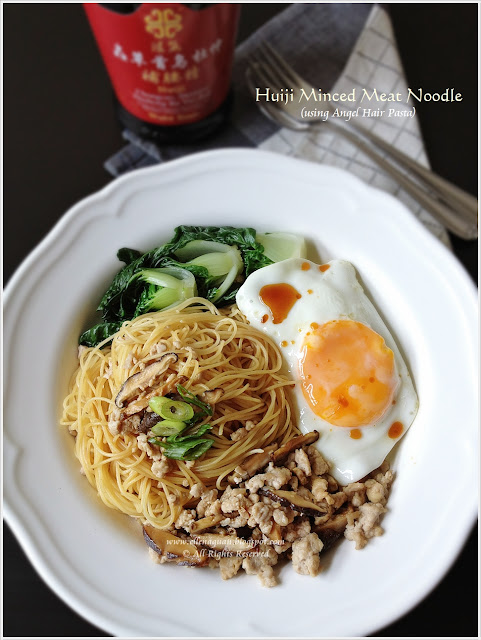 To complete the dish, you could add-on some blanched vegetables, sunny side-up egg, fishballs or etc according to your own preference.  I love the addition of the Huiji Waist Tonic which gives the dish a mild herbal taste without over powering it with strong herbal aroma.  Indeed this might be a good way to incorporate some nourish herbal treat in our daily meal. 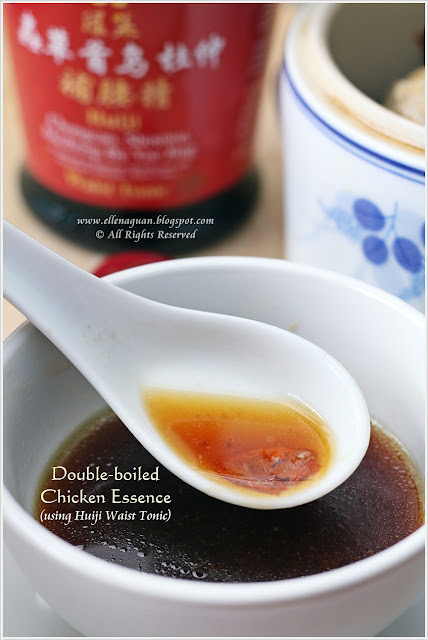 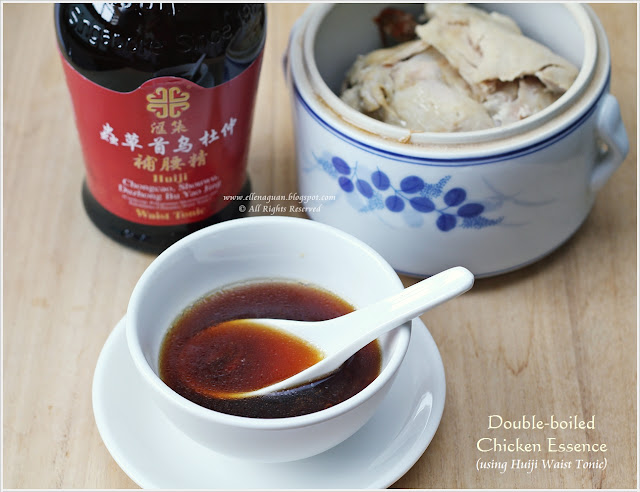 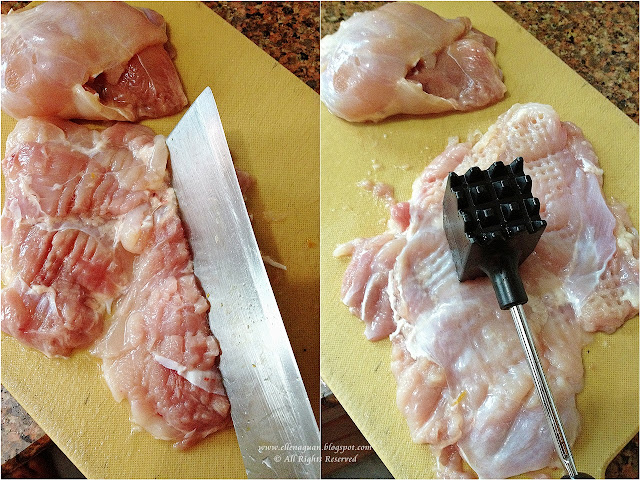 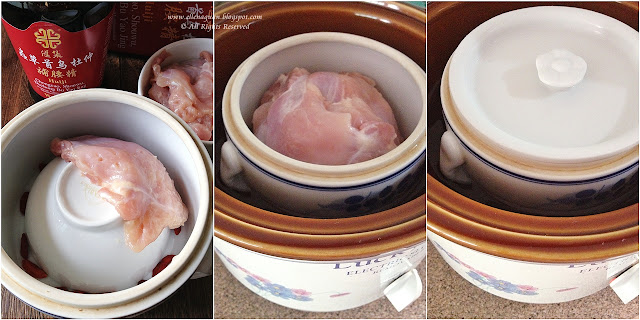 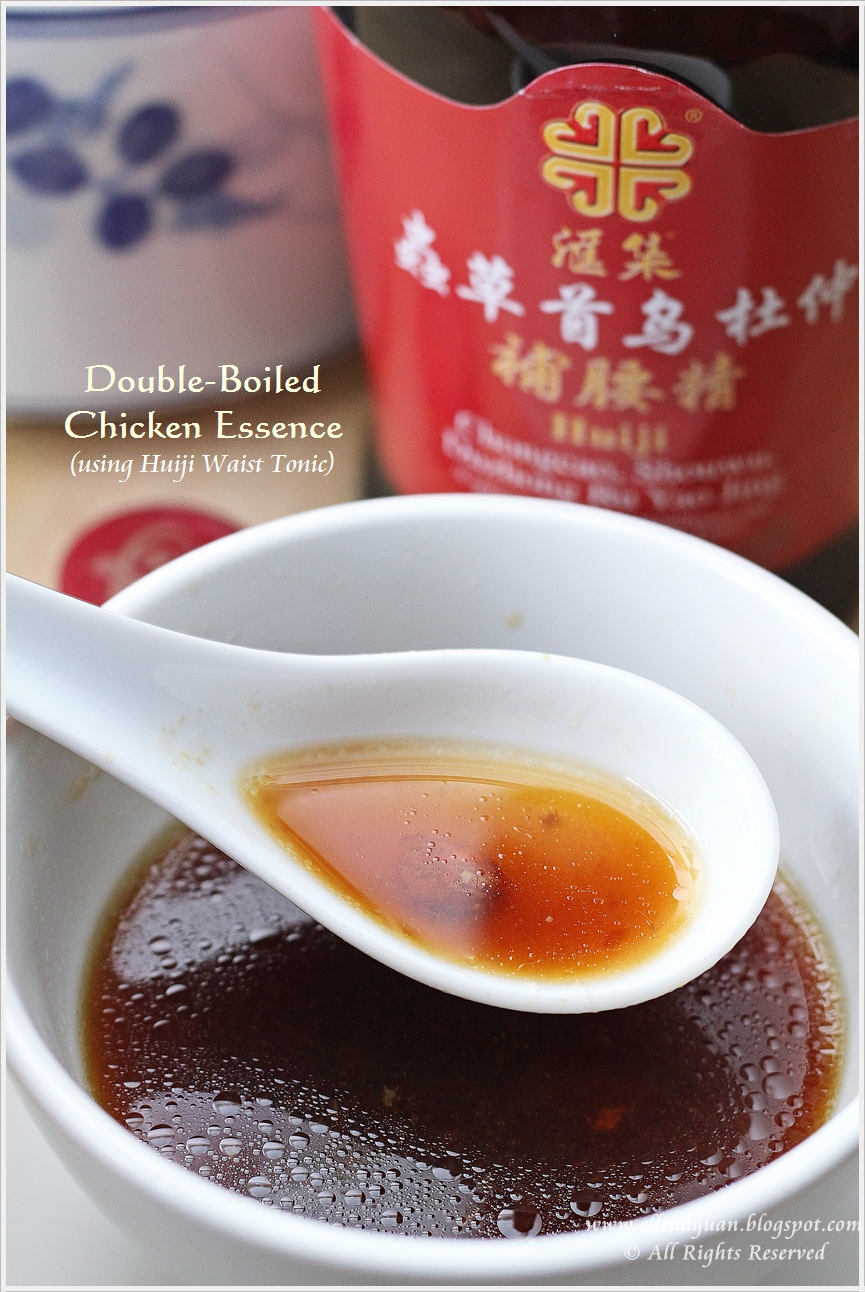