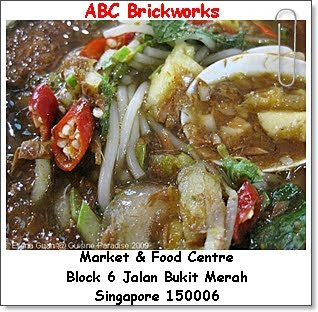 ABC Brickworks Food Centre is located in Bukit Merah District. According to some google search that I have made, this placed used to be the site of a brewery in the 1930s. And the ABC food center got its' name from the Archipelago Brewery Company which was set up in Alexandra road in 1931. 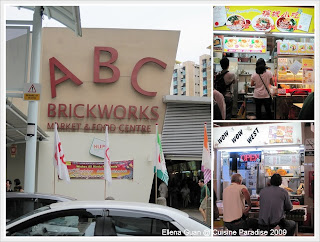 I got to know this place from the food review introduction by "U-weekly - 优1周" magazine on their 196 issues in September 2009 on Penang Laksa - 槟城辣沙. I remember there used to be a Penang Laksa stall near our area many years back and I still can re-called the taste of it's sweet and spicy soup. 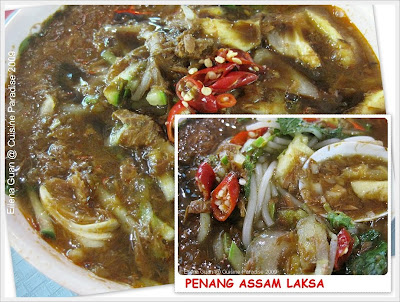 Today, based on the information given in the magazine, we managed to find Jason Penang Cuisine which is located at #01-113 in the ABC food center. The signboard and colour of the stall was kind of attractive in "Bright Yellow" colour as it easily caught our attention. After finding a good place to settle down, I went forward to take a look at their menu on what are their speciality.

Although from the photo, you might not find the dish as appetising as it look, but when you give it a try, you might like it according to your preference. To me, the soup is still not to the standard that I expected it to be. But overall, you still can give it try for the small size portion. Other than their famous Penang Laksa, I also saw some good reviews on their Penang Cha Kuey Tiao. Maybe we might give it a try next round when we visit this market again..... 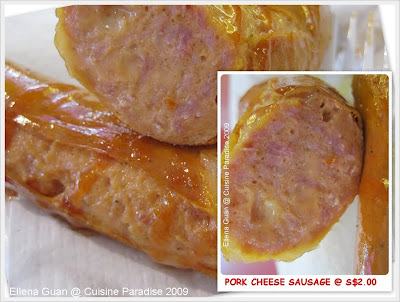 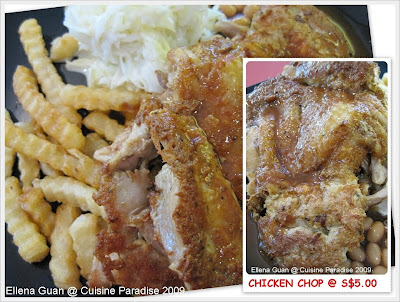 Other than their signature Pork Cheese Sausage, they also have a good range of Western set dishes like, Chicken Chop, Chicken Cutlet, Pork chops, Steaks, Fish N Chips and etc. We saw that most of the table around the stall are having Chicken Chop, so without hesitate we also order a plate of it which is served with huge portion of chicken cutlets, crinkle-cut fries, beans and salad. The chicken cutlet is well cooked and it is drenched in a tasty black pepper sauce that left you to crave for more.

For those who stays or work around this area, I am sure you have tried most of their dishes and agreed that the portion is really huge to be handle by one person :)