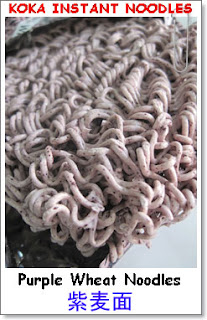 I was attracted to an advertisement on Friday, 23 Oct 2009 in the TODAY newspaper introducing on this new Purple Wheat Noodles from KOKA. I was immediately captured by the word "PURPLE WHEAT" and I am also curious about the actual colour and texture of the noodles. 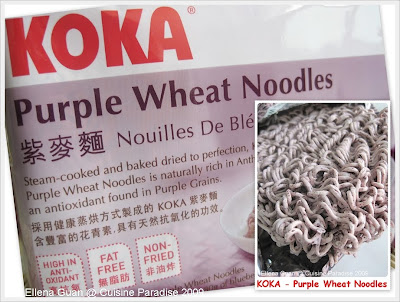 According to the advertisement, the purple colour from the noodles comes from its ingredients which is the "Purpleberry flour" that is the combination of purple wheat and purple corn. And it also stated that this Purple Wheat Noodles is naturally rich in Anthocyanins which is the same antioxidants as those found in blueberries and bilberries. Most imporant of all, they are are "High In Antioxidant - 高抗氧", "Fat Free - 无脂肪" and "Non-Fried - 非油炸". 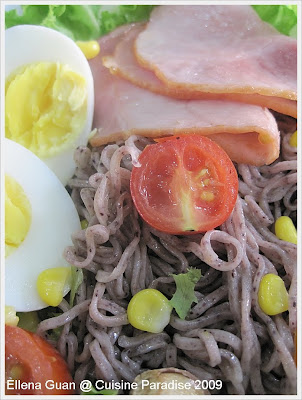 So without much delay, I decided to go and look for it today and I managed to a packet of this Purple Wheat Noodles which is 1 of the 3 packets left on the shelf. So this can explain the impact of the media advertisement :) I whiped up this Noodle Salad dish for our dinner and another Hong Kong Style Soup Noodles which you can take look at the recipes below:-