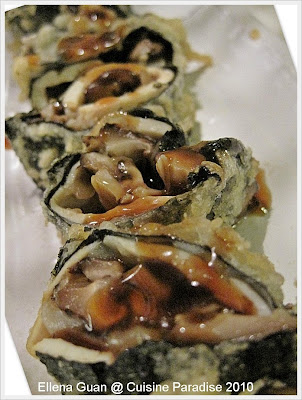 Today's lunch was a very special treat because Rey had being looking forward for it for a long long time. He has being talking about having SAKAE sushi with his best Facebook playmate.... "Ah Pooh" since the 1st day she return to Singapore. Joyce is a very good friend, sister and listener of mine thru MSN and facebook for the past two years while she was away in Australia :) And with similar tastebuds as us, she is also one of the Sakae sushi fan.....and she loves the raw Salmon slices ...just the way I do.....

But today's lunch treat, we have special mission.... Joyce was curious on how I take my photo shots before the meal and what are the angles that I will snap and etc... So this lunch was actually a very interesting and meaningful treat. Secondly it also meant for us to have an early celebration for my coming birthday in Mid January.... :p

Other than taking the usual items that we like, we also ordered 3 special items that we are going to try and share with the readers. First to arrive on the table is the"Beancurd Roll" shown on the first photo on top, but we are kind of shock with the dish. Because it seems rather different from what we saw from the menu which is something shown on the sakae photo above. As you can see from the Sakae photo, the white portion(seems like the doufu) is thicker and it clean and crispy on the outlook rather than the black sauce that drizzle on our serving....... Although the sauce taste quite nice, but it is sort of contradict to the photo shown on the menu which might be a bit misleading.... 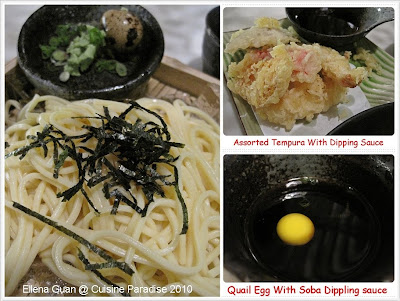 While flipping through the ordering menu, J & I decided to ordered this "Tempura With Yuzu Soba" which we find it worth the price of S$13.99 which consists generous amount of cold Yuzu Soba, a plate of assorted Tempura Moriawase. When we are busying taking photo shots of this dish, we are kind of caught off with what is the purpose of that little quail egg. Since we have not come across using this egg in any soba dish that we have tried before, we decided to approached the store manager for help. And she was very kind enough to explain to us that the egg is to be crack into the soba dipping sauce and eat together with the noodles. So at least in the end we knew that it is the same as what we thought it is used for :)

The Yuzu Soba taste great with it's QQ texture and a light "Yuzu" fragrant when you chew in your mouth. And this sure goes well with the deep-fry Tempura Moriawase. 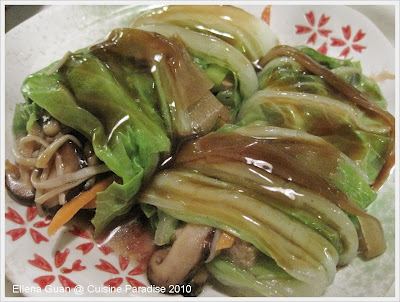 Cabbage Roll is another dish that we ordered from the Veggie Delights section. Em... seems like today most of the items are from the Veggie section :p From what I remember, this used to be a similar Chinese dish where they wrapped the meat mixture (minced meat & prawn with some chopped carrot, water chestnuts and etc) with blanched Cabbage, steam it over medium heat till the meat is done, then drizzle some oyster sauce gravy on top of it.

The one that we have today is quite similar to the type I mention above, but the different is the one that served at Sakae is more of mixed vegetables filling such as Shittake Mushroom, Carrot and Enokitake Mushroom. 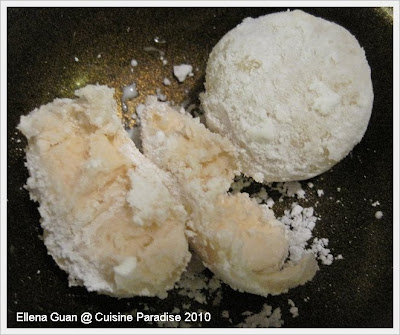 As for dessert, Joyce prefer something cold and sweet so she decided to go for the Peach Mochi Ice Cream. Em.... so far I have tried all flavour of Mochi Ice Cream except this peach flavour but personally I still prefer the Lychee flavour which is more fragrant.... em... wonder will Sakae bring in some DURIAN flavour... :p