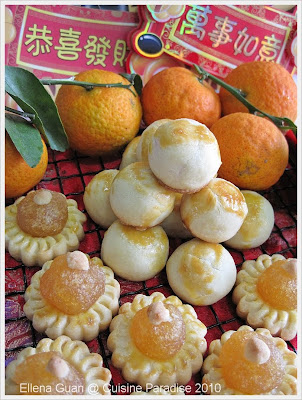 Time when by so fast as it's another starting of the year again. In about a month's time, everyone will be celebrating Chinese New Year and now it is the time to prepare and take note of those festive bakes/dishes. In my family, without failed for the past 8 years, even during my end of confinement period, I still make the effort to prepare and bake our family all times favourite - Pineapple Tarts. And this is also a time whereby my dear son is looking forward to..... as he has being helping me with the rolling of jam, and mould the tarts for the past 4 years.... :) 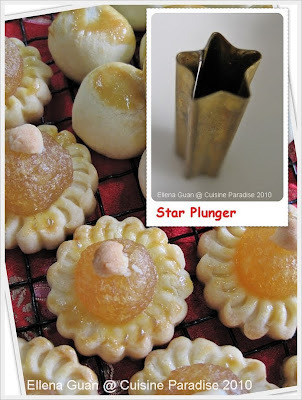 Pineapple tarts are usually consumed during the Chinese New Year season and it's typical shapes include flat, open tart topped with pineapple jam under a lattice of pastry or rolls filled with jam that are open at the ends and jam-filled spheres. The pineapple jam is usually cooked under low heat in order to caramelize the grated fresh pineapple that has been mixed with sugar and spices like cinnamon, star anise and cloves. From the photo, you can see the metal star shape plunger which they used to cut-out a tiny star from the pastry to top on top of the open tart. But too bad, I have misplaced mine and had only managed to find it after I have finished making these tarts :( 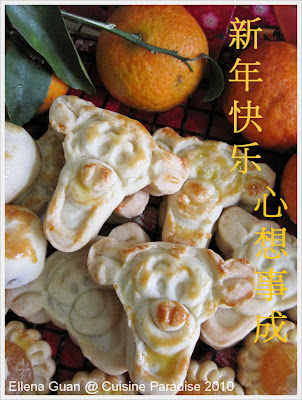 According to the Chinese Lunar Calender, there are 12 different animals signs which is rotating each year. And in 2010, it happens to be the year of the "TIGER". And since it is a Tiger year, I decided to make something different and special. So without much hesitate, I look-up for my baking mould and come out with this "Tigger" head print to represent the Tiger year goodies...... My dear son was very excited about this new design of our family Pineapple Tart and he actually forbidden anyone to eat it. 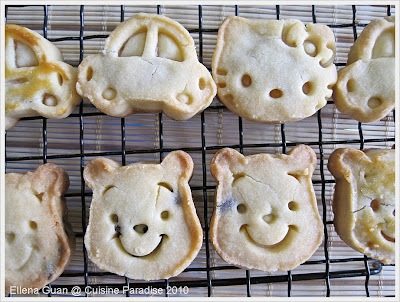 This set of kiddy pineapple tarts is totally belong to my dear son. He did all the rolling, mould and coating himself before I put it in the oven for him. I guess, no matter what is your age group like, you won't want to reject these cute Hello Kitty, Pooh and Tomica tarts :) 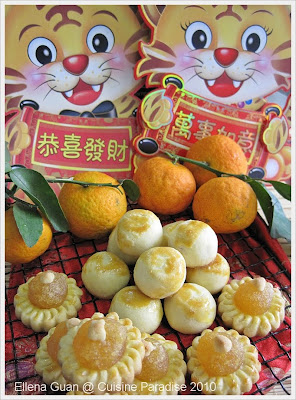 With Chinese New Year around the corner, me and my family wish everyone of you a HAPPY CHINESE NEW YEAR and may this year brings prosper, health and good career to everyone of you. If you are interested in the "Melt In Your Mouth Pineapple Tart" recipe, you can click HERE for more detail.