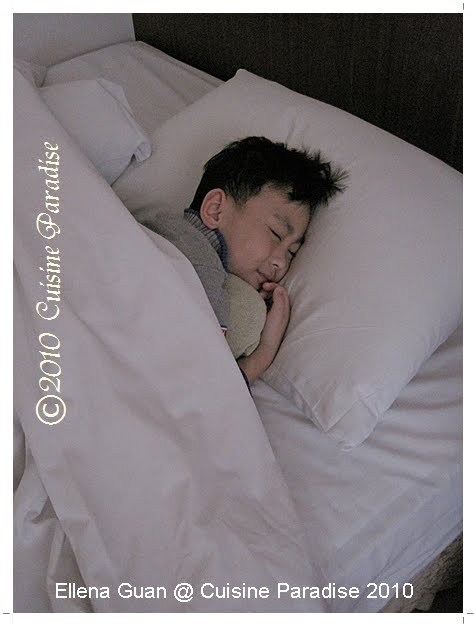 After a long day of travelling and fun watching of fire-crackers, fireflies and etc we slept around 11pm yesterday night. This was our first time staying over at a village farm. Although the surrounding scenery was great but the room was kind of creepy crawling with flying insects........ But thank God we still managed to have some sleep and replenish our energy for another brand new day. 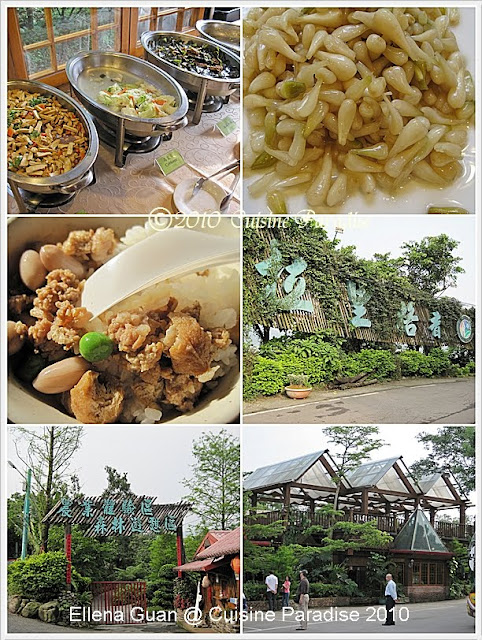 Breakfast was served in another restaurant near the gathering area. According to the tour guide daily breakfast was specially prepared using organic ingredients which is good for health. Normally Taiwanese love to have porridge, steam bun and side dishes for their morning breakfast. I also tried one of their signature braised minced pork that served with steam oat rice. Overall this is a good memories for us especially, Rey whom has never encounter country life and farm stay before. 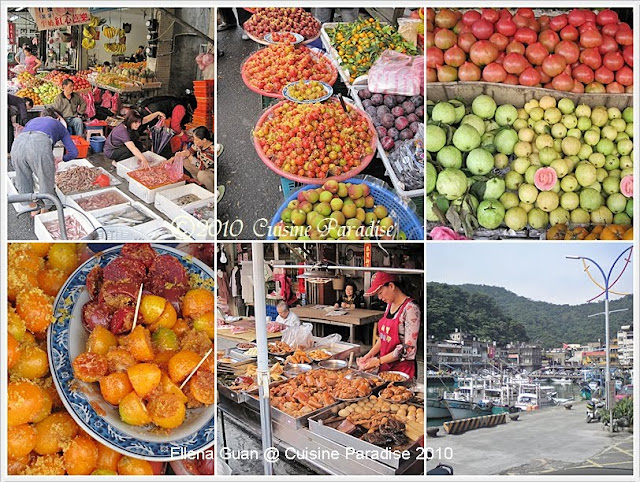 After breakfast, we head off to the southern side of Su-ao Harbor known as Nanfangau - 南方澳, a major base for coastal fishing. The abundance of the fish catch here has made Nanfang-ao one of the three largest fishing towns on the island. There are actually three fishing harbors and markets at Nanfang-ao, each with its own unique character. At this harbour you can also visit the famous Nan Tian Gong - 南天宫 which the landmark of Nafangau, and also the center for the traditional religion (Ma Zu - 妈祖庙) of the local citizen. 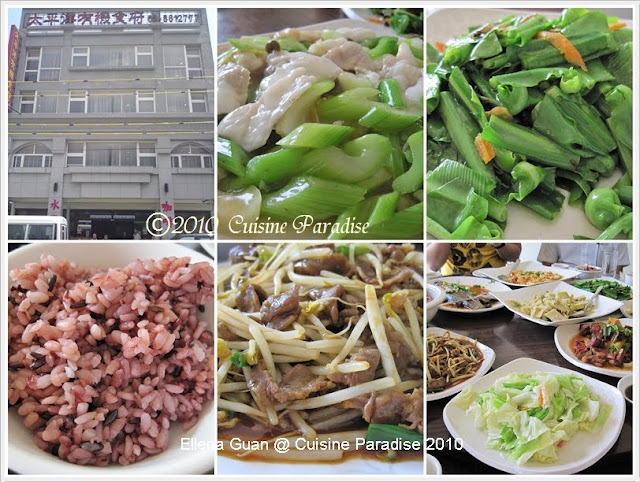 Depart from the fish harbour, we head off along the beautiful "Suhua Highway - 苏花公路" which a portion was built alongside very steep cliffs high above the Pacific Ocean - 太平洋 that it is a dangerous but yet scenic drive. It's such a pity that I didn't managed to take any photos during the journey because the winding road has made me so giddy and nausea. If you have to cruise along the highway you will agreed with me it's breath taking scenery.

About 2 hours or so, we reached Hua Lian - 花莲 whereby we stop over at an Organic Restaurant that is at the foot of "Taroko National Park - 太鲁阁国家公园". All the dishes shown above are all organic including the pork and poultry. Although the food look and taste great, but I am too sick(suffer from motion sickness) to have my lunch. 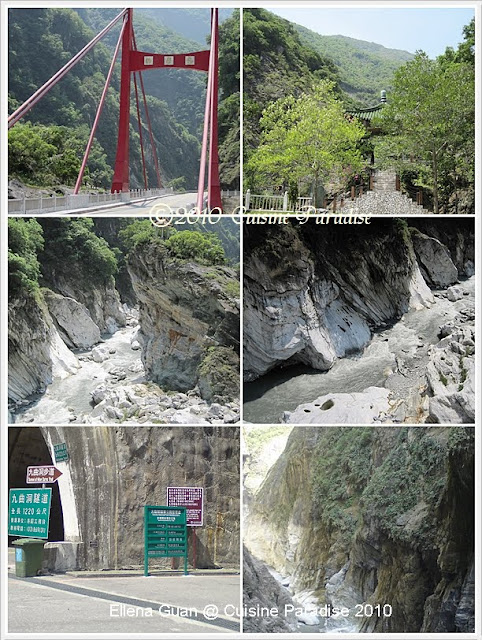 "Taroko National Park - 太鲁阁国家公园" has a few stopover stations for tourist to take photos and enjoy it's natural beauty. Taroko Gorge and its surrounding area are well known for their abundant supply of marble, leading to its nickname, "The Marble Gorge". The rock now seen in Taroko began over 200 million years ago as sediment on the bottom of the ocean. 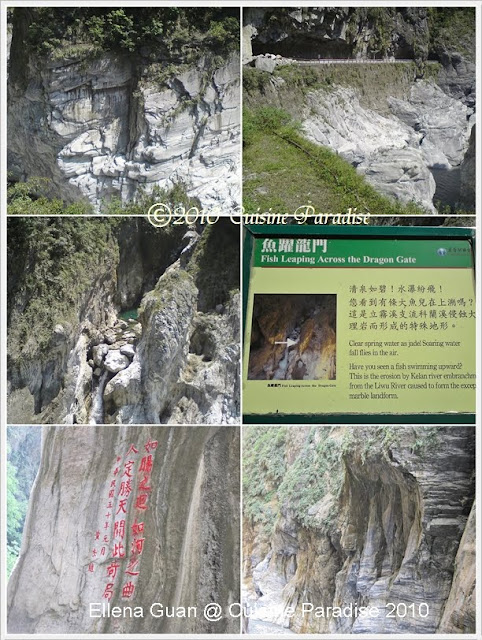 We visited two of the most-visited attractions at Taroko National Park which are Yantzukou - 燕子口 and the natural wonders along the Tunnel of Nine Turns Trail - 九曲洞步道. Since rockfall is extremely common in these parts, we had to put on safety helmets. In the photo above, you can see the Keelun river and the “Fish leaping across the dragon gate” natural structure. The rock formation is supposed to look like a fish trying to swim upstream. 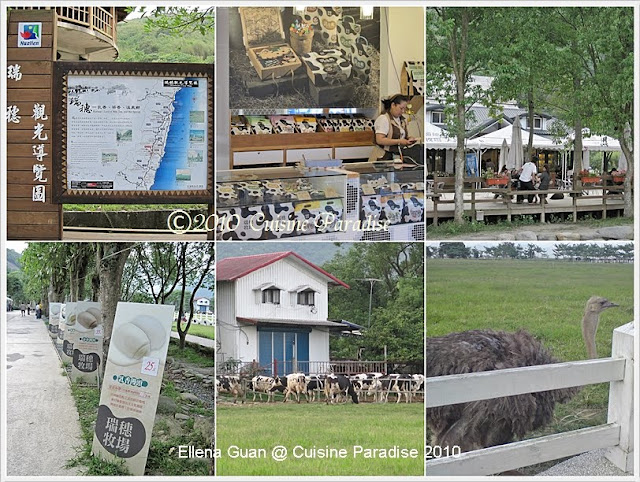 After admiring all the mountains and cliffs and follow by another hour plus of travelling journey we reached "Rei Suei Leisure Farm - 瑞穗牧场". They also has a open air cafe that sell their very own homemade milk ice-cream, cheesecake and steam milk bun which is one of their signature item. A souvenir store that sell all kinds of products with cow prints or design. This farm is sure a great place for kids to roam around enjoying feeding or milking the cows. 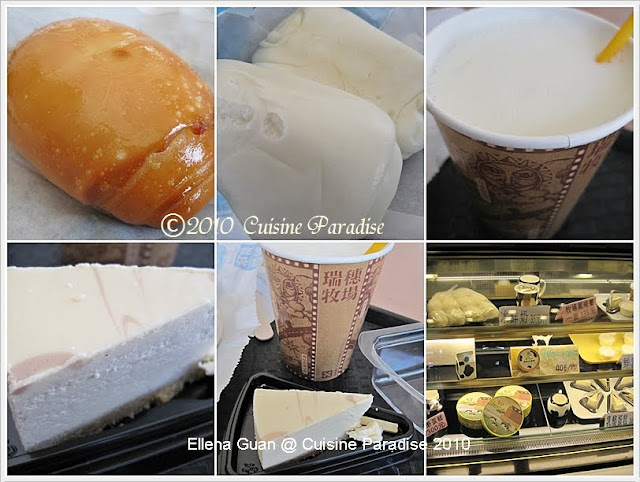 Since we came all the way to this farm, we must ordered some of their famous items for our tea-break. Mum love their "Steam Milk Bun - 鲜奶馒头" which is so soft and fragrant to taste. Rey on the other hand love their homemade milk ice-cream.....em... this ice-cream really taste like "cold milk" no wonder Rey love it so much that he don't even want to share his share with us. For me, I took the hot milk with cheesecake whereby the milk is freshly cook upon serving and this taste so different from the usual fresh milk that we bought from the supermarket in Singapore. 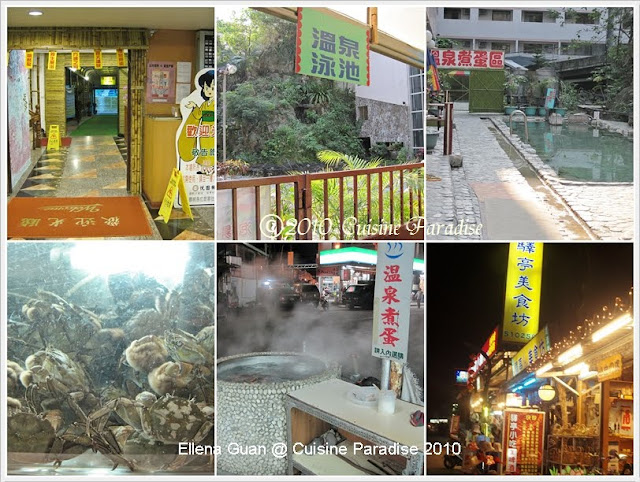 Finishing our tea-snacks, we head off to Chipen - 知本 which is about 20 minute's ride southwest of Taitung - 台东. Passing the village towards the mountains, though, the road leads to one of the most popular tourist destinations in southeastern Taiwan: Chipen's hot springs and resort. Hot springs are extremely popular in Taiwan because of their reputed benefits to the skin and to general health. 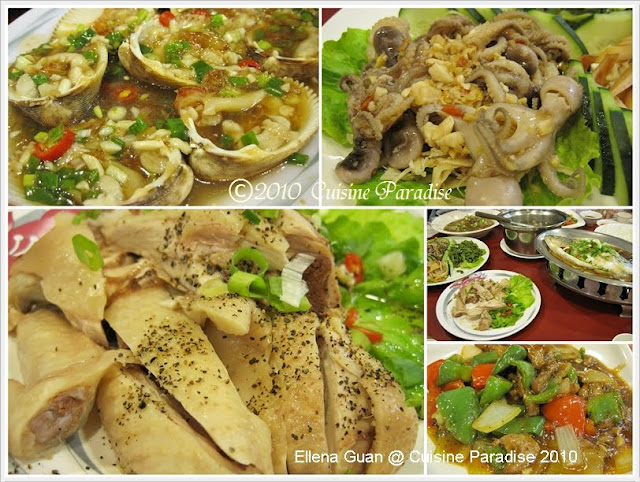 For dinner today we will be having in the restaurant located in our hot spring resort. The dishes are more or less the same as the usual meal where they served steam chicken, prawns, stir-fry pork, steam clam and fish, green vegetables and herbal soup. After dinner, we went out for a walk along the streets not far from the resort where there are some souvenir stores, mini market, restaurant, karaoke bar and etc.

Upon returning to the resort, we have our hot spring bath to relax our body and soul before bedtime in order to have a good rest and prepared ourself for tomorrow's program.