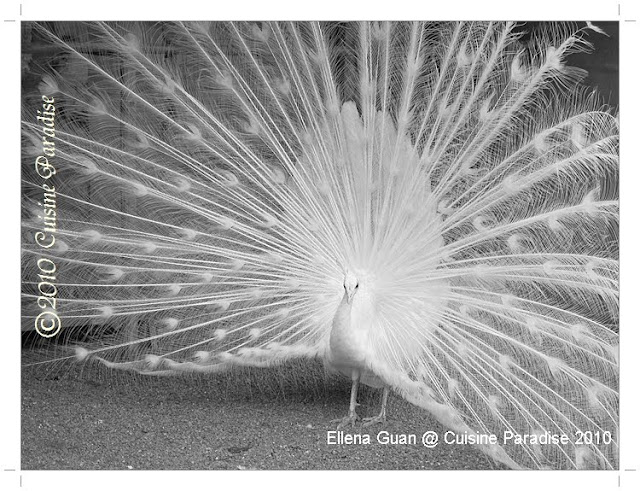 Today we will be visiting a Peacock Garden - 孔雀园 along our trip at "Sun Moon Lake - 日月潭" which is the largest natural lake in Taiwan as well as a tourist attraction. Although we have seen peacocks in Singapore too, but this is the very first time we saw White Peacocks appeared before us. The White Peacock is sometime being mistaken for an albino, but it is a colour variety of Blue Peacock. We all think that its white colour makes it looks really magnificent and elegant. 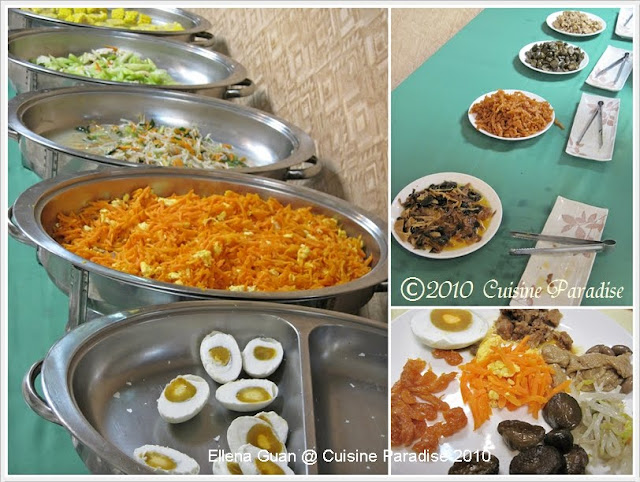 Em... time flies fast especially during holidays period. Today is already our 5th day in Taiwan and it seems that we have just arrived yesterday. Morning breakfast was served at Nanka Express Hotel - 南嘉饭店 where we stayed last night. Today we are having traditional Taiwan porridge with their local side dishes for porridge. 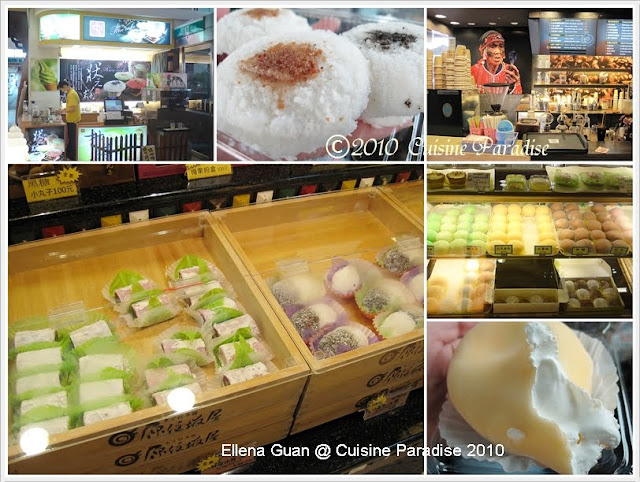 After breakfast we set off our journey to Sun Moon Lake where we stop by at one of the resting point along the highway. This is the biggest Resting Point - 休息站 that we have come cross during these few days and there is a mini supermarket, food court, cafe and snack shops in it too. Each of us happily grabbed those items that we want before boarding the tour bus. We bought some "Steam Rice Cake - 状元糕" which taste like our Kueh Tutu and peach flavour snow skin cream puff - 冰皮泡芙. The outer skin of the cream puff is soft and chewy and the cream filling is also not too sweet or greasy. 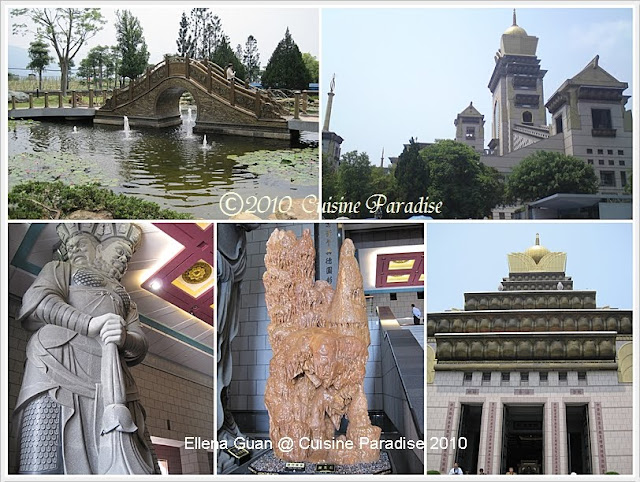 Along the way at Puli, we exit the highway and drop by this famous "Chung Tai Chan Monastery - 中台山佛寺" that is a Taiwan-based Buddhist monastic order founded by the Venerable Master Wei Chueh in 1987. The headquarters monastery itself, Chung Tai Chan Monastery was completed in September 2001 and is located in the town of Puli. The Monastery is mostly made up of stone, which symbolizes the steadfastness of Buddhist belief. 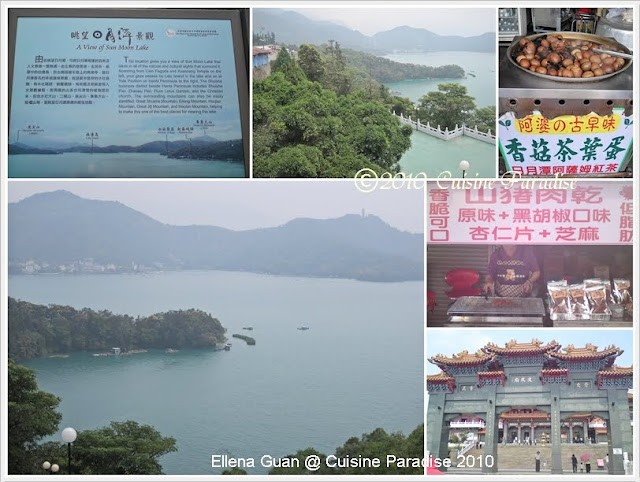 Sun Moon Lake - 日月潭 is situated in Nantou - 南头, Yuchih Township that is in the center of Taiwan which form the island’s largest lake. It is a beautiful alpine lake, divided by the tiny Lalu Island; the eastern part of the lake is round like the sun and the western side is shaped like a crescent moon, hence derive the name “Sun Moon Lake”. 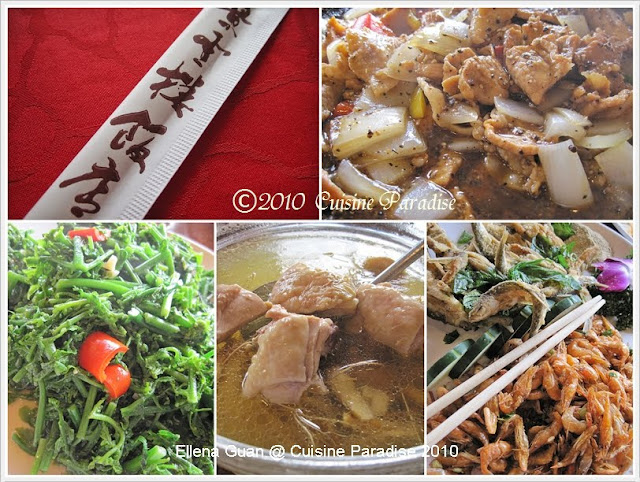 Lunch was at "Jin Sheng Lou - 景圣楼饭店" where they have a wide range of Sun Moon Lake local dishes as well their famous "Aborigines - 原住民" dishes which can only be found in Sun Moon Lake. Here we tried their mountain deer meat cook in hotplate, Aborigines wild vegetables that is only from Sun Moon Lake and etc. 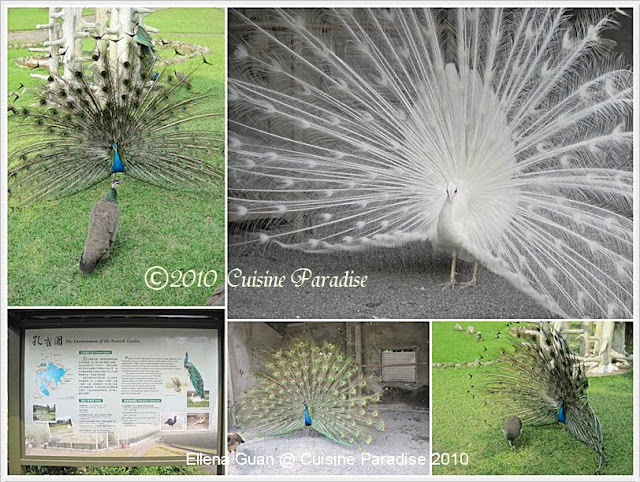 This Peacock Garden - 孔雀园 has over 200 peacocks and other rare and valuable birds. Over 100 other species live in this park, including the mountain chicken, the Formosan blue magpie, the long-tailed pheasant, the golden pheasant, the ampherst pheasant, and the black coot. The park does not charge any entrance fee too and aside from Peacocks, there is also a butterfly garden where butterflies are kept to breed. 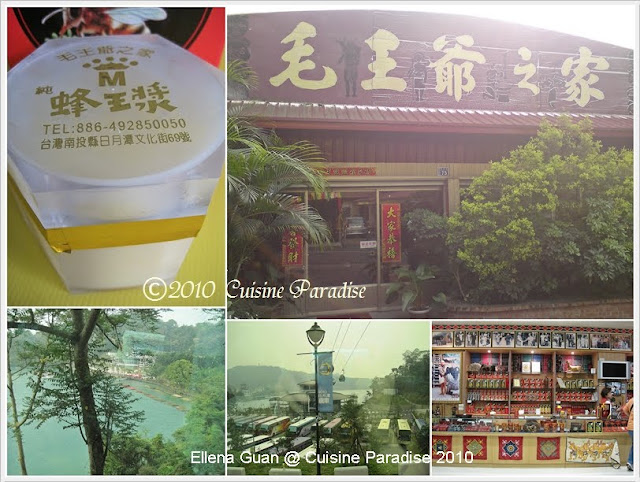 From our 2nd day in Taiwan, the tour guide has been recommending the Royal Jelly from "Mao Wang Ye Zhi Jia - 毛王爷之家" in Sun Moon Lake - 日月潭. When we finally arrived at the shop we are impressed by their products and on the benefits that we are able to absorb from those items such as Royal Jelly which is especially good for children.

A small bottle of Royal Jelly which can last for 1.5 - 2 months cost around S$75++ and accordingly to salesperson, if we keep Royal Jelly in the freezer it will be able to store for a few years compare to 1 year in fridge. Since Royal Jelly has an unpleasant taste which is milky and a stinging sensation when swallow, not many people prefer the fresh type compare to the capsule form. And also because Royal Jelly is very rich in protein we are advice to take only about 1/3 teaspoon each day. Another important point to take note is not to used any metal spoon on the Royal Jelly as it will create some chemical reactions and kill all the vitamins in it. 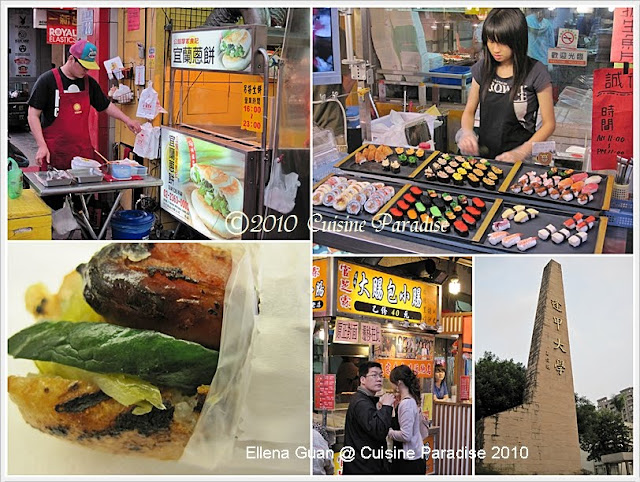 "Fong Jia Night Market - 逢甲夜市" is the night market which is near by the Feng Chia University. You can find a lot of food stalls selling their local snacks as well finding some low-price clothing and shoes. Entering their food street, we are caught by two long ques on the "Spring Onion Pancake - 油葱饼" and "Sausage with Glutinous Rice Wrap - 大肠包小肠". We bought one of this sausage rice roll which is a must try items from our Taiwan Food Searching list. This is indeed a very nice finger food which they grill the sausage and cooked glutinous rice then wrapped them together with some cucumbers and vegetables that make it look like a sausage burger 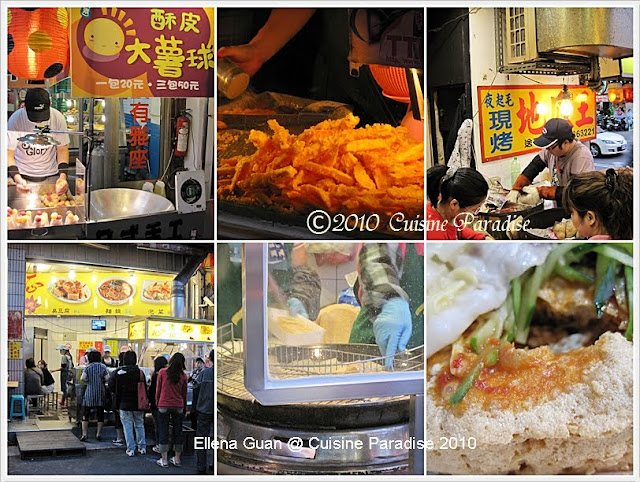 There are a lot of interesting snacks like deep-fry sweet potato balls, tempura fries, baked sweet potato and most scary "Smelly Beancurd - 臭豆腐" which makes you either hates it or loves it. There is this stall along the road side of the night market selling all kinds of vegetarian food such as "Rice Noodle - 面线", "Kimchi - 泡菜" and "Smelly Beancurd - 臭豆腐". So upon seeing so many people queuing, we decided to join in and we bought a box of vegetarian smelly beancurd which served with some kimchi and special chilli sauce. To our surprised although it really stinks while waiting for them to fried the beancurd but the smell is not that bad when we eat it. Rather the outer layer was very crispy and inside is so soft and juicy with the combination of kimchi and sauce. Overall it is very nice. 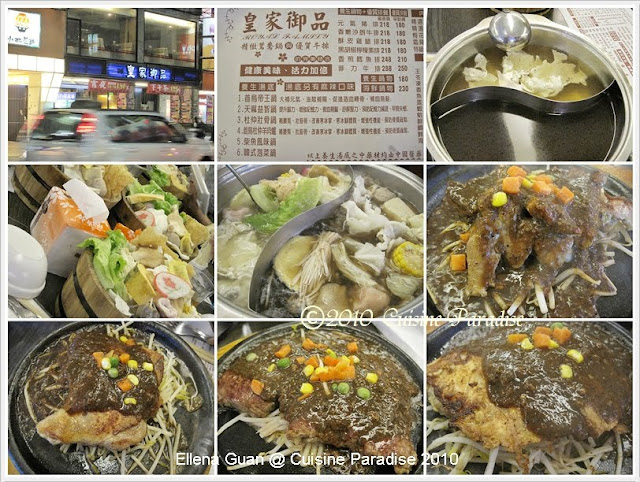 Most of the people will agreed that, going to tour is like eating non-stop trying to try all kind of their local food which we can't or seldom see in our own country. After walking around Fong Jia Night Market for an hour or so, we head off to "Royal Family Restaurant - 皇家御品" for dinner. Today's dinner will be buffet and we will be having a steamboat and western set dish of our choice. Since we have four person, we ordered Black Pepper Steak, Chicken Chop, Pork Pork and Cod Fish. Other than the set meal, each of us is given a bucket of steamboat ingredients for us to eat with their special soup broth which they prepared. 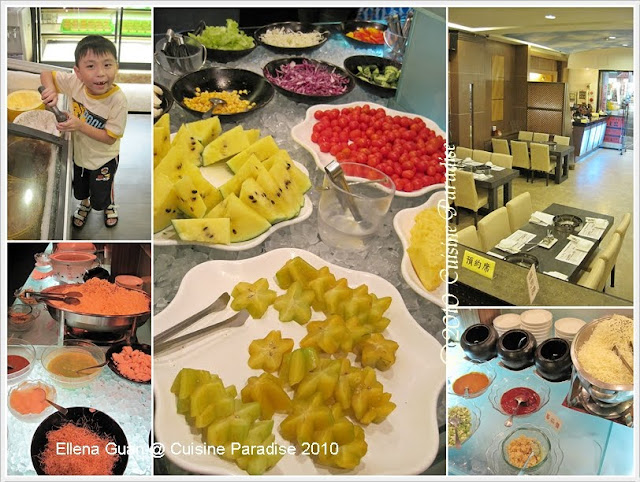 As you can see from the photos, we are still entitled for the fresh fruits, salad, ice-cream(this is Rey's favourite counter) and assorted pudding. This was indeed a very fulfilling dinner where we get to try all kinds of items in one meal. With all these, it only cost about NT$288 for the steak + steamboat set which is about S$12.00 and you can have all the above. Worth it right!