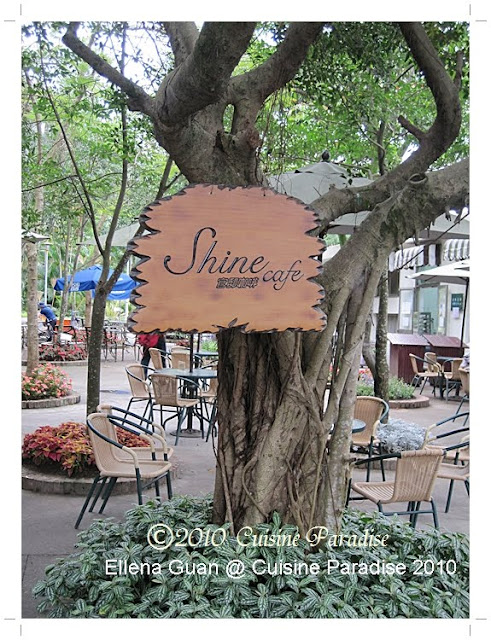 Today will be our last sightseeing trip before us going back to Singapore tomorrow late afternoon. Like I have mentioned before, fun and happy moment always past by so fast without us realising that it has already being seven days since we first arrived in Taiwan. Our itinerary for today will be visiting Chiang Kai-shek Memorial Hall - 国立中正紀念堂, National Palace Museum, National Revolutionary Martyrs' Shrine - 国民革命忠烈祠, Taipei 101 and Xi Men Ding - 西门町. 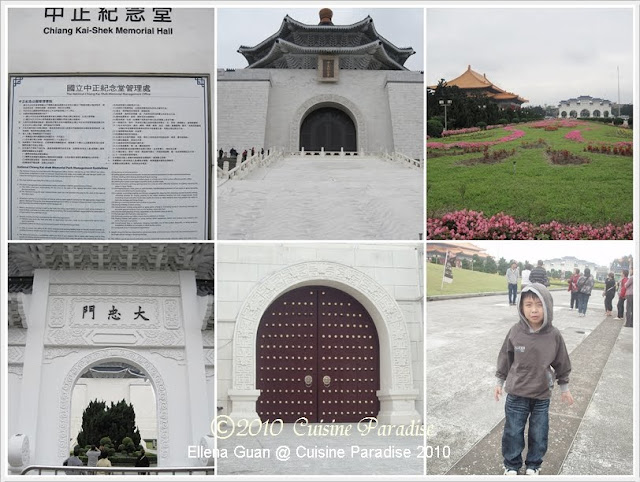 After morning breakfast, we arrived at our 1st stop at the "Chiang Kai-shek Memorial Hall - 国立中正紀念堂" which is a famous monument erected in memory of "Chiang Kai-shek - 蒋中正 / 蒋介石" the former President of the Republic of China. The monument is surrounded by a park, stands at the east end of Liberty Square whereby the structure is framed on the north and south by the National Theater and National Concert Hall. 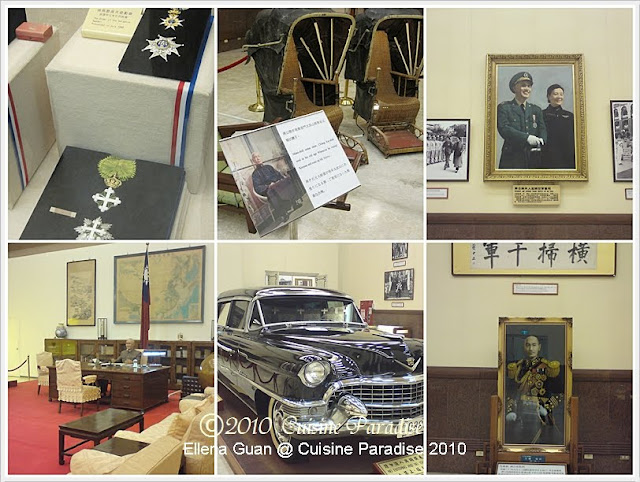 Inside the Memorial Hall building, there are some exhibition halls whereby you can take a short tour on the cars, furniture, books and etc that has being used by the late "Chiang Kai-shek - 蒋中正 / 蒋介石". 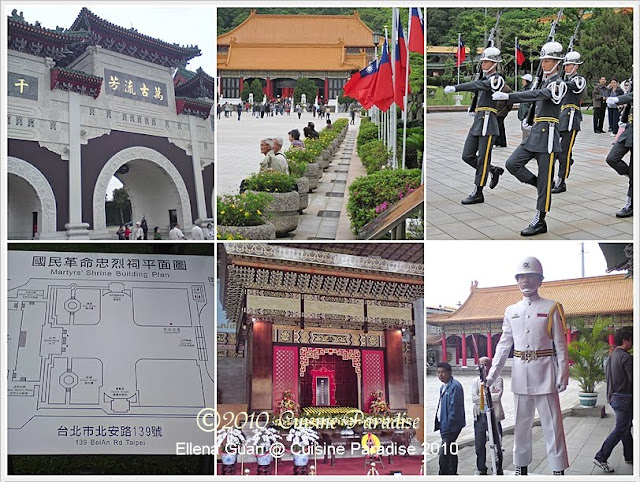 Next we take a short ride to the "National Revolutionary Martyrs' Shrine - 国民革命忠烈祠" which is a shrine in Taipei City, dedicated to more than 300,000 civilians and soldiers killed in struggles with the Qing dynasty, the Japanese and the Communists. Most of the tourist are attracted to the hourly changing of the guards which are extremely exciting affairs that last for about more than fifteen minutes. 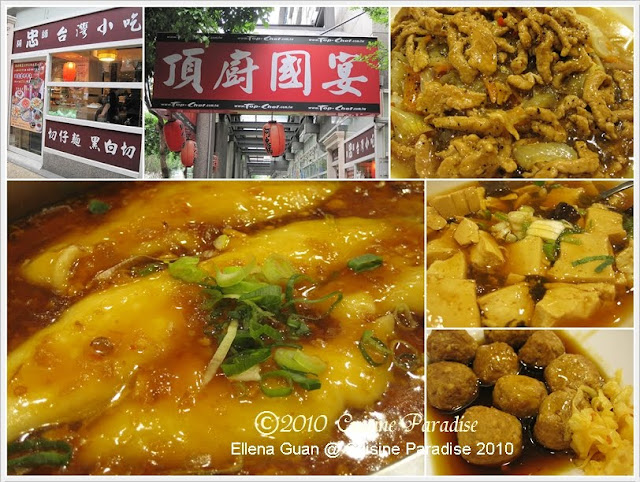 Lunch was served at "Top-Chef - 阿忠师台湾小吃" after our visit to the "National Palace Museum - 故宮博物院" which do not allow us to take any photograph during the entire museum tour. Although I can't show you much on the Palace Museum but if you are interested you can click on the link above to know more about it on their official website. The food for our lunch today is nothing really fancy of what we expected. As you can see from the photo above it seems like all the dish has the same sauce base because all their colour is the same :p Out of so many days, I guess this is the most average meal we have despite that it is from a well-known restaurant. 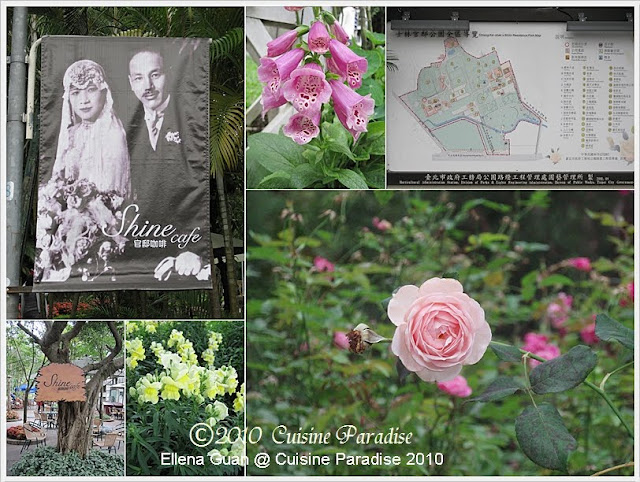 After lunch we arrived at the former official residence of Chiang Kai-shek and Madam Chiang which is known as “Chiang Kai-shek Shilin Residence Park - 士林官邸” that is located at the triangle of Fulin Road and Zhongshan North Road. This place is a garden is full of plums, chrysanthemums and roses that are favoured by the Chiang couple. There are also a lot of beautiful flowers blooms according to season that make for a stunning view throughout much of the year. 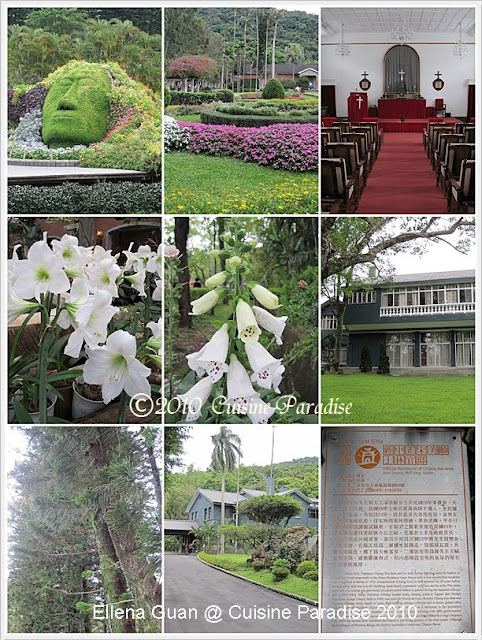 In the park, there is a little private chapel for Madam Chiang which is still looking good. According to the tour guide the resident of Madam Soong Mei Lin might be opened to public access in a few years time. 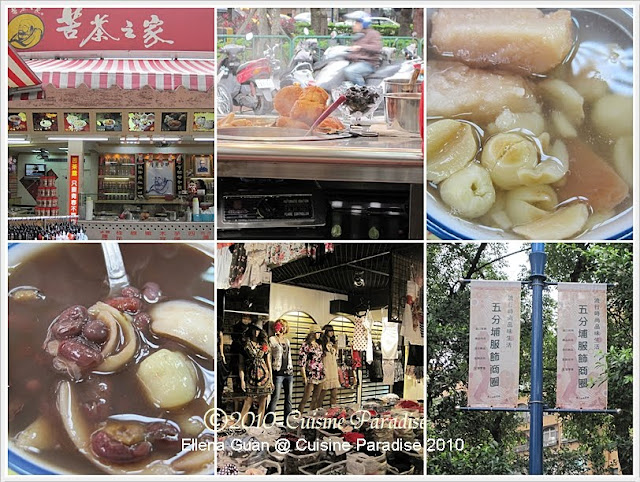 After about an hour or so at the Park, we headed down to "Wu Fen Pu Wholesale Centre - 五份铺" which is a fashion district area where you can shop for low-priced clothes from the wholesalers directly. Mum managed to get 2 dresses and a coat which is really at a good bargain price. Em.. for us, we didn't get any desire clothing but instead we pamper ourself with some wonderful dessert at one of the stall known as "Ku Cha Zhi Jia - 苦茶之家". 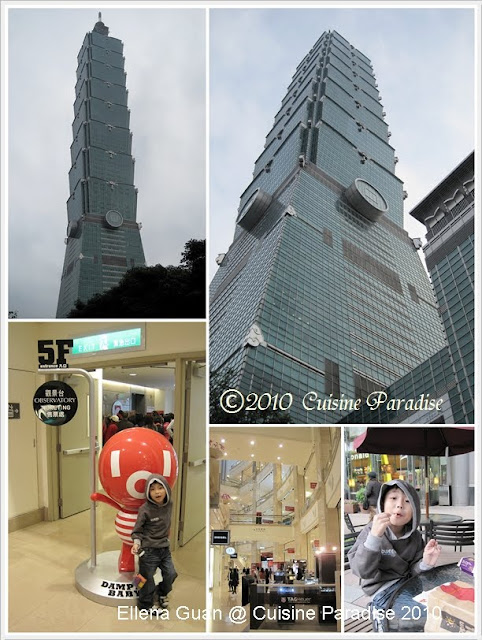 "Taipei 101 - 台北 101" is one of their local attraction that we have being looking forward to. The building is supposed to be ranked as the world's tallest building from 2004 until the opening of the Burj Khalifa in Dubai. Taipei 101 comprises 101 floors above ground and 5 floors underground whereby there is a multi-level shopping mall adjoining the tower houses hundreds of fashionable stores, restaurants and clubs. 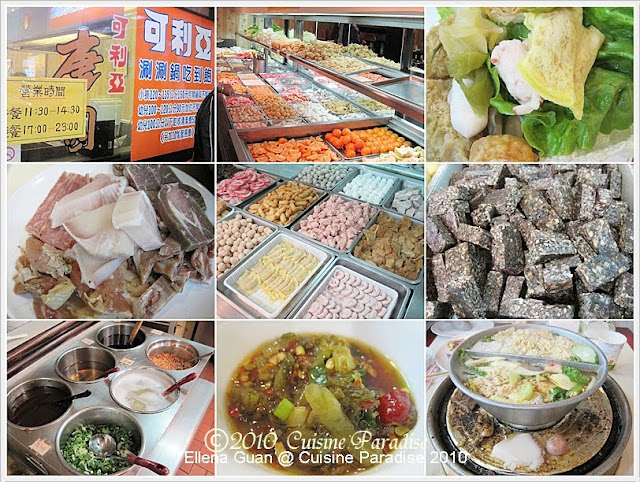 Tonight's dinner was at "Koriya - 可利亚" where we get to try their 2-in-1 Hotplate plus Yuanyang(鸳鸯) Steamboat. There are a lot of varieties of meats, vegetables and etc which you will find something that suits you. And this is also the 1st time where we get the chance to try out Taiwan famous "Ma La Steamboat - 麻辣火锅". Although the soup might appear to be clear after adding the Ma La sauce, but it taste so hot and spicy which far beyond our imagination.

Other than ingredients, there is a self mixed sauce area where you can mix and match the ingredient to come out your very own dipping sauce. To our delight mum mixed a very nice dipping sauce that consists of pickles, crash peanut, oil, chili and etc which is very refreshing. 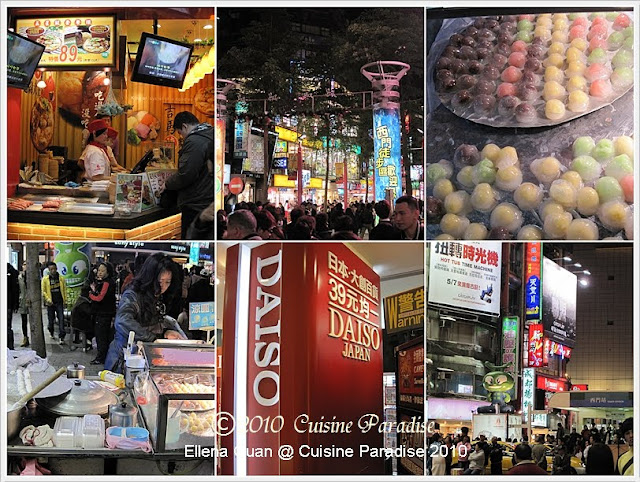 To end our day after a hearty dinner, the tour guide drop us off at Xi Men Ding - 西门町 is the epicentre of Taiwan’s youth culture. There are a lot of cute fashion stalls, varieties of food can be found here as well. And to our surprised we spot "Daiso" outlet there there too :) Other than that, we also found a very unique restaurant known as "Modern Toilet - 便所主题餐厅" where all the food are served in toilet bowl design cups/plates. I will get share with you more about this special restaurant in my next post :p Stay tune.......