This year Mother's Day celebration as usual was organised by my brother at Zhou's Kitchen, Far East Square branch. As most of us are working and also to avoid the weekend crowds we decided to settle the dinner on Friday night. 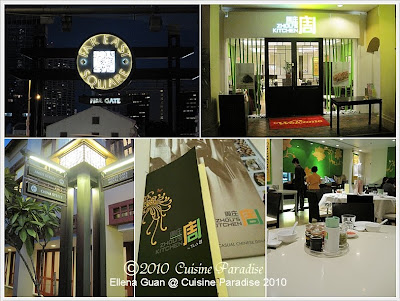 Zhou's Kitchen provide casual Chinese dining concept and it has about four branches located in different parts of Singapore such as Square 2(novena), Anchorpoint and Jurong Point. Besides serving a tempting variety of A-La Carte dishes, there are set meals offering value and convenience too.

For today we are having their A-La Carte Dinner Buffet which cost about $29.80++ per Adult where you can pick your choice from "Cold Cuts and Appetizers", "Meat", "Seafood", "Vegetables", "Rice/Noodle" and "Dessert". 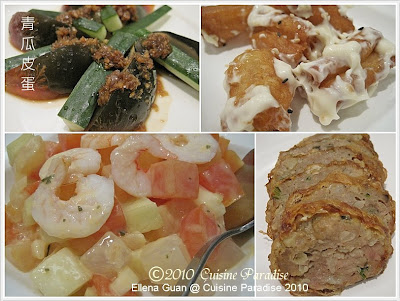 For Appetizers we have Century Egg and Cucumber cubes - 青瓜皮蛋 which is light and refreshing. Salad Prawns with Mixed Fruits in Thousand Island sauce and Deep-fried Fritter were rather kind of average standard. While "Fujian style Meat Roll that comes in 5 thin slices was kind of to our liking with it special ingredients. 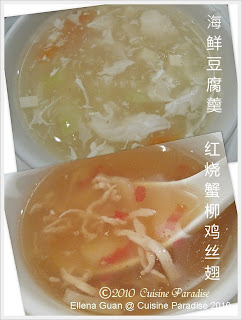 Talk about their soup, it was rather disappointing. The 2nd soup shown in the above photo supposed to be their limited one serving dish known as "Braised Shark's Fin Broth with Crab Stick and Shredded Chicken - 红烧蟹柳鸡丝翅" but it ends up to be just like a normal bowl of diluted soup with some shredded chicken which mum hint to the waitress on her dismay. On the other hand we all agreed that the normal "Braised Beancurd Broth with Diced Seafood - 海鲜豆腐羹" taste even much better than the Shark's Fin broth. 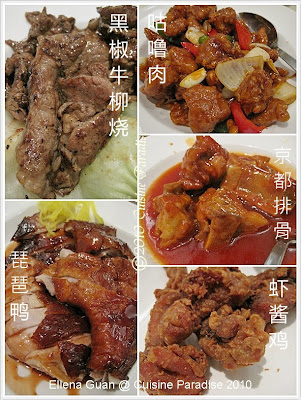 For the Meat dishes, each of us select our favourite items such as "Pan-fried Beef Tenderloin with Black Pepper - 黑椒牛柳烧" which is fragrant and tender to taste, "Pi Pa Duck - 琵琶鸭" where the meat is soft and goes well with the topping sauce but their "Deep-fried Pork Ribs With Chef's Special Sauce - 京都排骨" is quiet a disappointment due to the presentation and the sauce taste so sour and the pork ribs are so tough. "Sweet and Sour Pork - 咕噜肉" on the other hand was much better with it's tasty sauce and overall combination, so end up we have two serving plates of that instead. As you can see from the photo, their "Deep-fried Chicken with Prawn Paste - 虾酱鸡" was just like some deep-fried chicken strips instead nothing fancy. 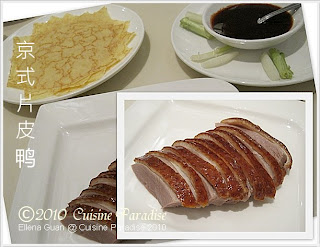 Beijing Roast Duck - 京式片皮鸭 is also one of the Limited to 2 Slices per Person items on the list. This dish is kind of different from the usual Peking Duck that use the outer crispy duck skin to wrap with the pancake wrapper. Rey enjoy himself on serving us this dish by assemble the spring onion, cucumber and sweet sauce with the duck and wrapper while we are busying with other dishes. 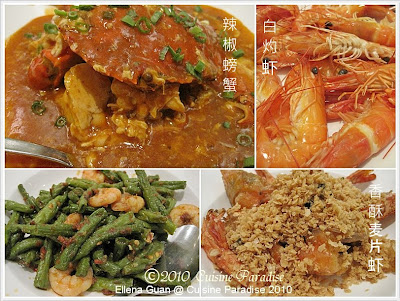 On the Seafood list, we tried their "Chilli Crab A-La Tung Lok - 辣椒螃蟹" other than the presentable look the taste wise was rather average or not suitable for our liking. The Chilli Crab sauce was too sour rather than those usual hot and spicy chilli crab sauce that we have patronised from some of the famous crab restaurant. "Poached Live Prawns - 白灼虾" was rather better with its look, taste and freshness. "Deep-fried Prawns with Crispy Oats - 香酥麦片虾" and Sauteed Shrimp with Long Bean in Sambal Sauce are another two prawn dishes that we ordered too. 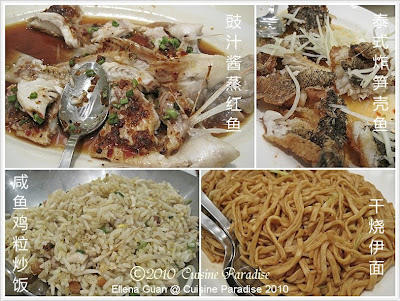 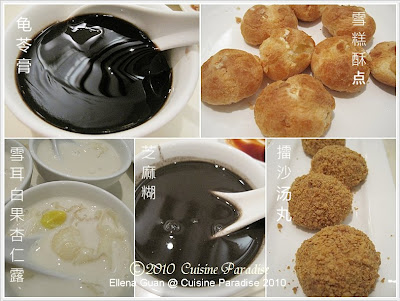 Finally, the moment that I am waiting for is here. Dessert menu/items is always one of the main thing I look for when I scan through the menu. So when it comes to the end of the meal, I will always reserved extra space for my favourite dessert. Today we are having "Chilled Herbal Jelly With Honey - 龟苓膏", "Sweetened Almond Cream with White Fungus - 雪耳白果杏仁露", "Sesame Cream - 芝麻糊", "Glutinous Rice Balls with Peanut Crumbs - 擂沙汤丸" and lastly "Ice Cream Puff - 雪糕酥点".