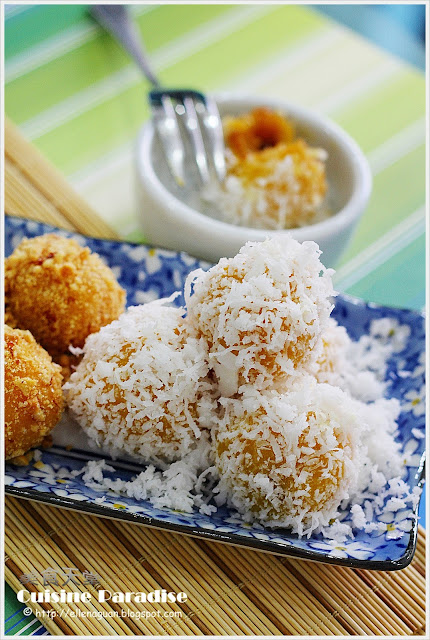 Ondeh Ondeh/Onde Onde is one of the popular and delicious tea-time snacks in Singapore. Usually they come in green colour (pandan flavour) glutinous rice balls that are sprinkled with grated coconut on the outside and filled with Gula Melaka as the inner fillings. So when you give this Ondeh Ondeh a bite it would burst in your mouth with the melted Gula Melaka oozing out from the rice ball. I love those bite-size and chewy versions with a good grade of fragrant Gula Melaka that makes you keep popping them into your mouth. 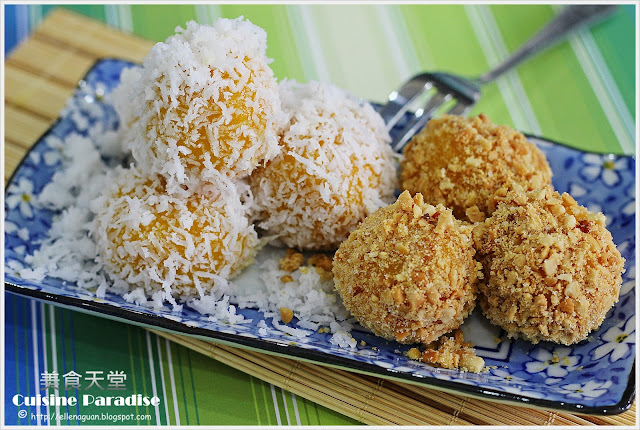 There are two different common methods on making this snack; one is made totally using glutinous rice flour while the second method is a mixture of sweet potatoes and glutinous rice flour. But now there are a lot of different varieties available in the stores such as using Yam, Chocolate, Purple Sweet Potato and etc to attract more customers. 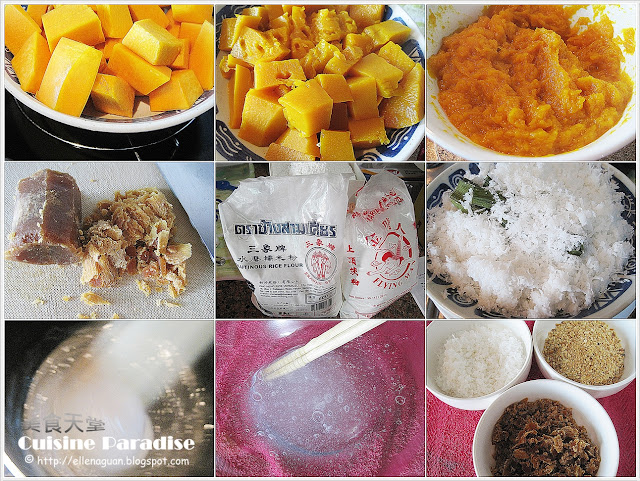 Here are the ingredients to make the pumpkin ondeh ondeh so let's get ready on these such as:- 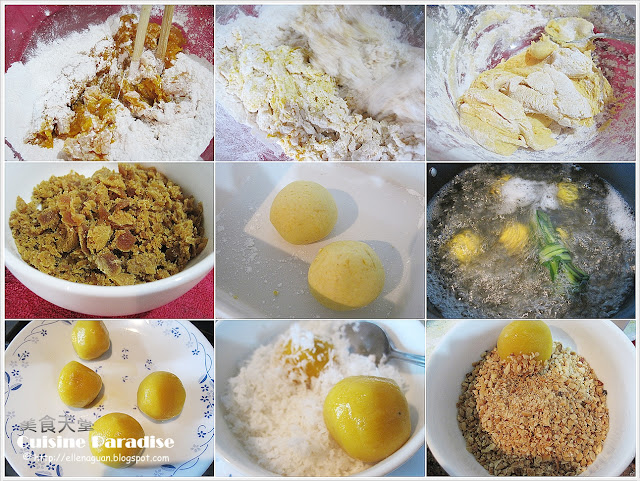 These are the photo on the steps on how to make the ondeh ondeh:-

Method:
1. Cut off the skin of the pumpkin, weight about 200g and cut it into small cubes and steam them for about 15 minutes or until soften.
2. Remove it from the steamer rack and let it cool while preparing other ingredients.
3. Mix 1/4 teaspoon salt with the grated coconut and steam for 5 minutes together with the pandan leave. When done, set aside and let it cool.
4. Mix tapioca flour and water together then cook over medium heat until it forms a thick paste.
5. Remove it from heat and let it cool in a mixing bowl.
6. Next add in mashed pumpkin, glutinous rice flour and 1/2 teaspoon salt and knead to form a soft dough.
7. Pinch a bit of the dough and roll each ball into a size of a "fishball(about 15g)".
8. Bring a pot of water to boil while stuffing the filling of the ondeh ondeh.
9. Flatten a dough ball and put a bit(1/4 teaspoon) of Gula Melaka in the centre, pinch to seal the opening and roll again into round shape. Repeat this with the other balls.
10. Drop about 5 - 6 balls into the boiling water while continue making the rest. Cook the balls in boiling water until they float to the surface which takes about 2 minutes.
11. Use a slotted spoon to remove the balls from the water when they floated up and place them on the grated coconut.
12. Roll each ball in the coconut and serve warm or when cooled.

Note:
~ I also coated some of these pumpkin ondeh ondeh with some ground peanut instead of the traditional grated coconut. And it taste taste great with the pumpkin and peanut combination. 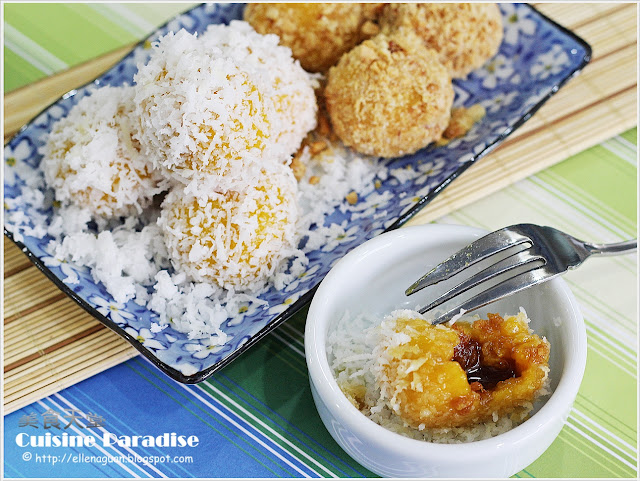 After some steaming, kneading, rolling, cooking and rolling, these are our Pumpkin Ondeh Ondeh with dual coating. I guess it would depend on individual liking on whether to pick a grated coconut coating or ground peanut or maybe "both". 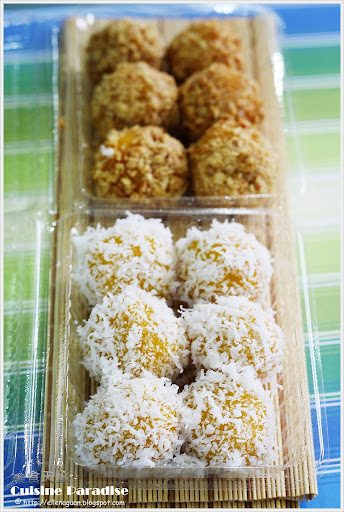 These are some of the ready packed Pumpkin Ondeh Ondeh that we bought to our weekly cell group for the after session food time. Does this packing resemble to those "store bought" ondeh ondeh?