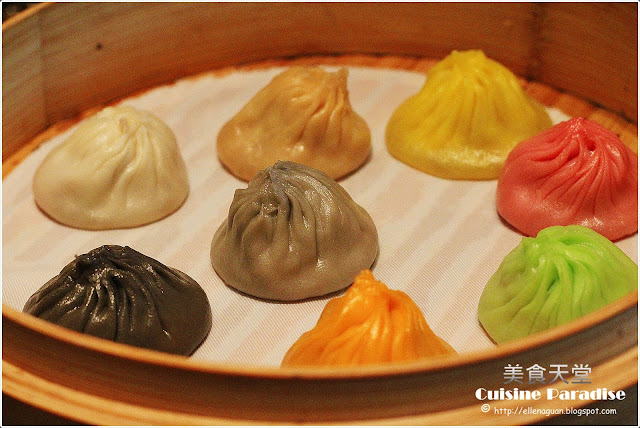 Located on the top floor of ION Orchard, Paradise Dynasty is the latest addition to the Paradise Group of restaurants by the founder Mr Eldwin Chua. This young entrepreneur is often spotted in the restaurant walking around to make sure that things are going on well in operation. And this restaurant is aiming to sell their signature Xiao Long Bao such as Black Truffle, Foie Gras, Garlic and Cheese pricing between $8.80 and $12.80 for six pieces. 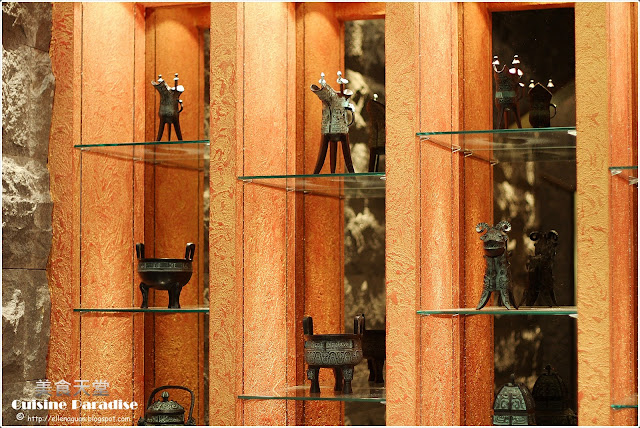 Upon entering the restaurant from the front counter, there is a very unique entrance path that leads you passed their glass view open kitchen into an incredible modern and beautiful dining area with 206 seats. Eating at this restaurant definitely give you a feeling like having a “royalty meal” at the palace especially with the backdrop Qing Dynasty Emperor’s throne. 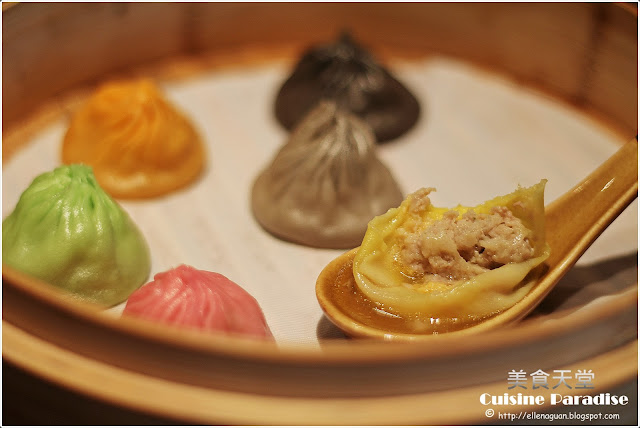 I was captured by a poster on these colourful Xiao Long Bao (XLB) near the bus-stop outside The Hereen at Somerset some weeks ago. And also with some good recommendation from friends who have tried, we decided to pop by and try out their “Signature Dynasty Xiao Long Bao - 皇朝小笼包” which consists of eight different flavour in a basket. Each flavour is represent by an unique colour such as:-

Green: With Ginseng smoothing herbal soup broth with pork filling but too bad the herbal taste is not strong enough for herbs lover like us.

Brown: Foie Gras with a touch of French luxury combine with Chinese delicacy.

Black: Black Truffle stands out with a fantastic aroma soup broth with pork filling which makes us tempted to order another basket full of just black truffle XLB.

Yellow: Cheesy with a hinge of the silkiness of cheese with pork filling which I think is a very interesting combination.

Orange: Crab Roe are finely minced and mixed with the pork filling which bring out the freshness of seafood taste.

Grey: Garlic infused soup broth with pork filling for those garlic lovers, but not me.

Pink: Szechuan flavour consists hint of spiciness when sipping the broth and it gives out a light aroma from the Szechuan peppercorn.

In order to get the correct and finest taste from each Xiao Long Bao, you would have to start from the original flavor, follow by the sequence ending with the strongest taste from the Szechuan Xiao Long Bao.
Price: S$13.80 per basket (8 assorted pieces) 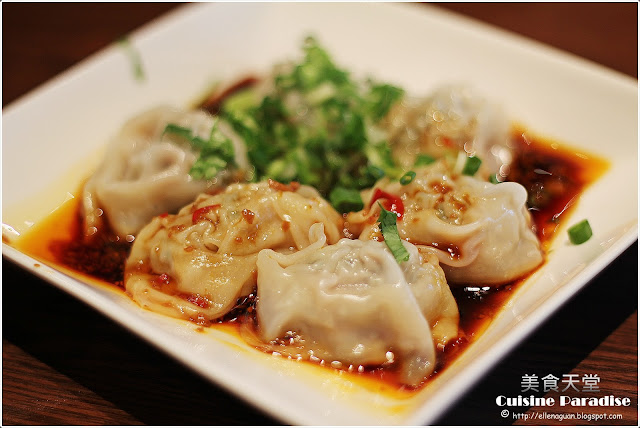 "Pork Dumplings with Chili Sauce - 油抽手" is one of our all time favourite whenever we visit Din Tai Fung or Crystal Jade Kitchen. But today after trying the one served at Paradise Dynasty we declared that they have won our vote for this dish compared to the other two restaurants mentioned above. The Pork Dumplings are indeed more tender and juicy with its filling wrapped by a thinner layer of wrapper which is smooth and soft when bite. The accompany chili sauce is also not too salty or spicy and it goes perfectly with the dumplings.
Price: S$4.80 per plate(6 dumplings) 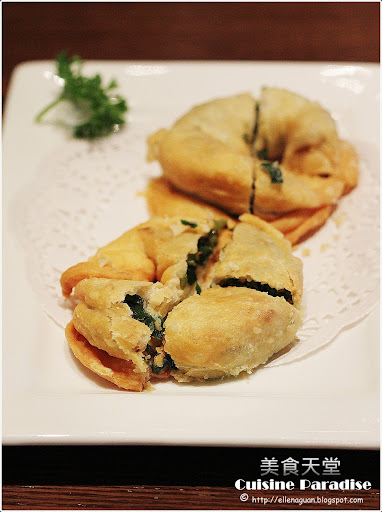 Mum and I both love this "Scallion Pastry - 葱油饼" which is so crispy on the outer layer and fragrant in its filling with the chopped scallion (spring onion). This is sure to be a great tea-snack if you are looking for some snacks for tea time to accompany with the Xiao Long Bao. 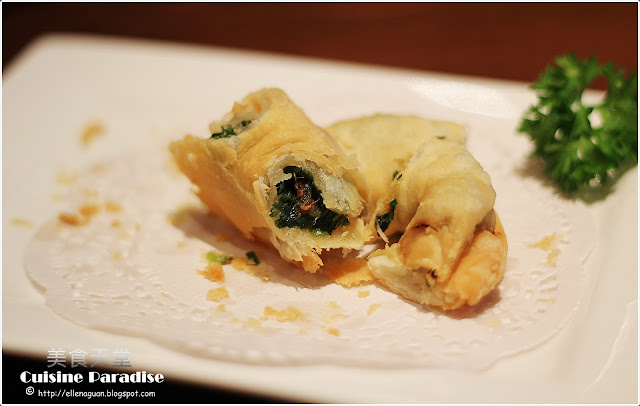 Each mouthful of this you ccould taste the flaky pastry that is well wrapped with generous amount of scallion mixture that makes you crave for more.
Price: S$2.80 per plate (2 pieces) 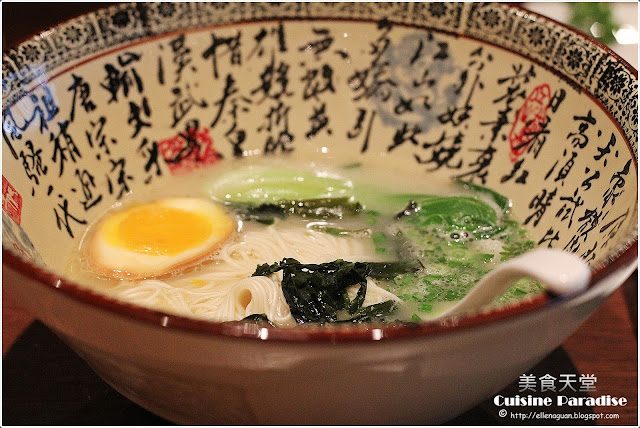 For those who fancy La Mian, Paradise Dynasty has prepared 18 different types of La Mian freshly made from their open kitchen. Each strand of noodle comes with fine and silky threads that are served with different pairing soups and ingredients. And for your information, their soup broth used ingredients such as pork bones, pork ribs and whole chickens that are simmered over slow fire for at least 12 hours before being served. 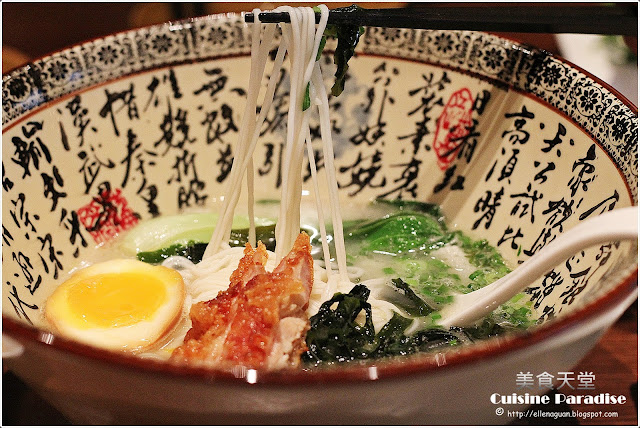 Out of so many La Mian in their menu mum chooses this "La Mian in Signature Pork Bone Soup with Pan-fried Chicken Chop - 煎鸡扒拉面" as she preferred something light instead of seafood or beef. Overall their pork bones broth taste just as good compared to the others and their noodle's chef definitely has done a good job in making such tasty and springy noodles to go with the broth. I am sure after this La Mian we would definitely come back to try out more on the other 17 choices soon.
Price: S$9.80 per bowl 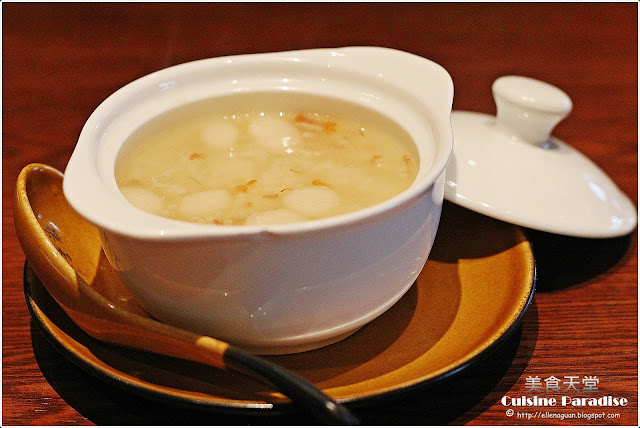 After all the savory food that we had now it’s time for some dessert and after looking through their dessert column, I decided to get a bowl of this “Rice Ball Dumplings -酒酿丸子” which I believe not many youngest would order unless they like the taste of rice wine. 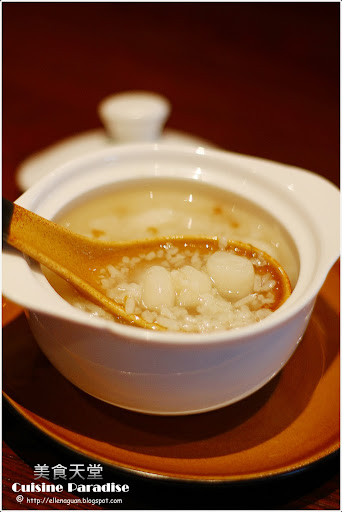 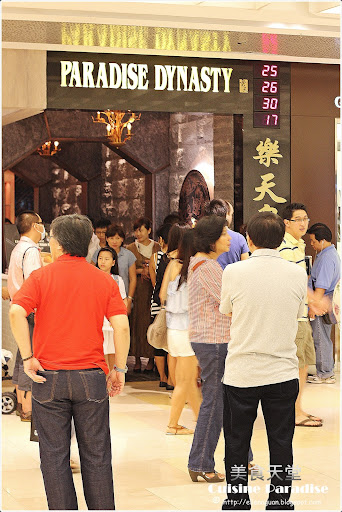 To avoid long queue and waiting time during weekends, lunch/dinner timing maybe you could call for reservation or try to reach slightly earlier.