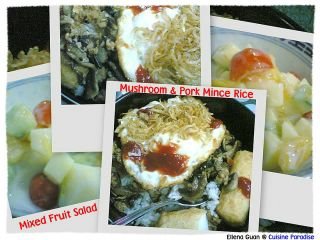 Had being feeling unwell for the past one week due to Fever, Diarrhea, Sore Throat and etc…. So I really don’t have much time and effort to whip up any meals. Today I decided to clear away the Button Mushroom, Japanese Cucumber, Cherry Tomatoes and some fruits that I bought last week. At first, I was thinking of cooking Spaghetti with these ingredients but later I switch my mind to a more complete rice meal serve with Mixed Fruits & Vegetables Salad.

Methods:
1. Marinate the pork mince with some pepper, light & dark soya sauce, cornflour and sesame oil then set aside for later use.
2. Wash the Dried Whitebaits and drained well then use some kitchen paper towel to absord the water.
3. Add about 1/2 Tablespoon of oil in a non-stick pan the stir-fry the whitebaits until golden brown. Season with some salt and suagr for taste.
4. Heat up another 1 Tablespoon of oil in the pan, add in the chopped onion and saute until it's became soft and slightly brown then add in the pork mince.
5. Stir-fry until it's fragrant and almost done then add the button mushroom and stir for another 2 minutes then pour in Rice Wine or Water and continue to simmer until sauce thicken.
6. Dish up and place ontop of the rice, top with cripsy Dried Whitebaits, egg or etc and serve.